What a beguiling and unpredictable play Richard Greenberg has written in The Babylon Line, an elegiac look back on a period of evolving social attitudes, which follows the lead of its narrator — an adult-education creative-writing teacher played by Josh Radnor in a welcome return to the New York stage — in its disdain for structural rules. Even when the meandering play appears to lack focus, however, or stack up multiple endings, it weaves subtle threads, conjuring a vivid world of cause and effect while harnessing the power of fiction as a means either to escape or to comprehend real life.

The story is set in 1967 in Levittown, Long Island, the birthplace of cookie-cutter suburbia, and while the double edge of that kind of American enclave as both safety cushion and airless trap is a familiar theme, the playwright brings a fresh perspective.

Greenberg may be the most writerly of contemporary American dramatists; authors and storytelling have often been a key element in his work, notably 2002’s The Violet Hour, set in the publishing world. Here, he even cross-links via one character to Our Mother’s Brief Affair, produced on Broadway earlier this year. Unwieldy as it sometimes seems, The Babylon Line is more satisfying than either of those plays, and it’s been given a beautiful premiere production by Lincoln Center Theater, gathering a first-rate cast under the patient guidance of director Terry Kinney.

Richard Hoover’s set instantly transports us with its finely detailed classroom, outfitted with wooden desks and a row of framed U.S. presidential portraits placing us in the Vietnam years, a period in which American innocence was fast retreating and anti-establishment questioning becoming more vocal. Sarah J. Holden’s character-defining costumes and David Weiner’s lighting, so warm and descriptive, further enhance the evocative mood.

Off Script: Josh Radnor Unwinds From 'The Babylon Line' With Yoga and Oscar Contenders (Q&A)

Radnor plays Aaron Port, who introduces the story in 2015, as his own complicated account of events from late fall-through-early winter 48 years earlier, prefacing his tale by admitting, “I may not come off well in it.” He was 38 back then, with just one promising story published in a prestigious literary journal, when he took a part-time teaching job in Levittown strictly for the money, traveling by train once a week from Greenwich Village. His direct-address interludes make it clear this is an unreliable memory play.

Half his students are there by accident, because they couldn’t get into Contemporary Events and Politics or French Cooking. They include the formidable Frieda Cohen (Randy Graff), Queen Bee of the Sisterhood of first-generation Jews (her garden was featured in Newsday, no less), flanked by her coffee-klatch cohorts, Midge Braverman (Julie Halston) and Anna Cantor (Maddie Corman). Also enrolled is World War II veteran Jack Hassenpflug (Frank Wood), whose conversational skills are as lacking in nuance as his writing; and Marc Adams (Michael Oberholtzer), an odd duck who appears to be on the autism spectrum. Or possibly his brain was fried by drug use, if the gossip of Frieda and Co. is to be believed.

The kinship of that trio with the Weird Sisters from Macbeth can hardly be coincidental, though Greenberg and the three hilarious actresses humanize the stereotypes so that even the overbearing Frieda is less a witch than “a conqueror,” to use her own term. “Shameless and fearless” is how she describes herself when challenged to write about what scares her. She refuses to draw on her own life for inspiration, even though her backstory, blurted out in a furious rant, indicates that beneath the meticulously managed surface, she may have more colorful material than anyone in the class. Ultimately, none of the characters is as easy to categorize as Aaron initially believes.

The playwright evokes other theatrical influences in the remaining role, Joan Dellamond, a bruised, enigmatic woman who’s part cracked Tennessee Williams doll and part fierce Ibsen-esque prisoner, chafing against her domestic confinement in a loveless marriage. Played by Elizabeth Reaser with a cool blend of ethereal sensuality, naked hunger and the lightest breath of a Southern accent, Joan is the spark that ignites the class. At times, she echoes another Shakespeare creation, Lady Macbeth, in the way she goads the ambivalent Aaron into being a more engaged teacher, while prompting reactions that range from intrigue through admiration to indignation in her classmates. 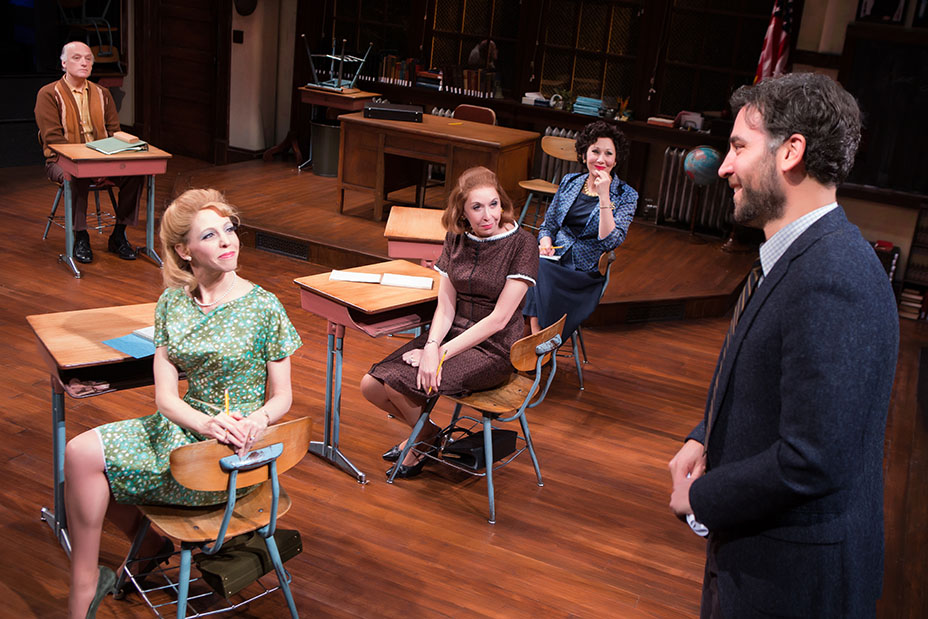 Joan initially appears terrified of what she’ll unleash by translating her thoughts into writing, but her stories, once they start flowing, are riveting in their emotional candor. Even the affectless Jack starts anticipating them with oh-boy enthusiasm, while Frieda is so appalled by one piece that she flees the classroom, for reasons revealed much later in the play.

Read aloud in class, the vignettes often come to life before our eyes, most enchantingly when Midge shares an episode from soon after she moved to Levittown, and her husband’s illness at the time led to her mowing her own lawn to meet the strictly enforced neighborhood regulations. That mastery of a chore believed to be men’s work — according to the codified social rules of the era — yielded the discovery of a calming pastime, to which she has returned often “in the warm weather months.”

Jack writes about his nightmarish memories of the Battle of Overloon, Anna about her family’s European vacation (“Venice was a study in contrasts”) and the reticent Marc eventually coughs up a chiseled nugget from his long-in-the-works magnum opus, surprising them all. In each of them, Joan’s writing uncorks a new boldness, even if that just means allowing Midge and Anna to air a dissenting opinion when Frieda makes withering judgments about the mysterious outsider.

But the more Joan reveals of her own unhappiness, her disappointing marriage, her borderline mental instability and her desire for something to make her feel alive, the more Aaron remains frozen in passivity. When she learns that the teacher hails from not too far along the Babylon railway line from Levittown, she is forced to reassess him, just as he reassesses himself for years afterwards. Was he spineless or principled? The playwright leaves that to us to decide.

Both Radnor and Reaser play characters that remain to some degree opaque, withholding as much as they expose of themselves, whether in Aaron’s detached demeanor — he’s the polar opposite of the stock inspirational teacher character, and he knows it — or Joan’s more darkly elusive manner. But the actors draw us in with equal skill.

While Greenberg could be criticized for being too discursive, that ends up being part of the play’s charm, as stories and revelations about each character shed a different light on them, suggesting the small ways in which the writing class has changed them, or will as they go forward. Only Frieda remains defiantly unchanged, and somehow more pitiable for it in Graff’s biting performance. Kinney and his superb cast are attuned to the silent undercurrents of Greenberg’s writing as much as the sly flourishes of wit and cruelty and the elegant streams of prose-like dialogue, making The Babylon Line an idiosyncratic pleasure.