One of the small miracles of The Band’s Visit is that this wistful new musical — in which themes of waiting, yearning and inertia play a significant part — weaves such seduction out of ephemeral encounters unfolding over a single uneventful night. As soothing as a cool breeze across desert sands, this gorgeous, minor-key show won a deserved cluster of awards in its premiere late last year at the Atlantic Theater Company. It transfers to Broadway with its delicate alchemy intact, borne aloft by the intoxicating Middle-Eastern rhythms of David Yazbek’s original score and by the soulful performances of an exemplary ensemble.

In terms of its small-scale unconventionality, David Cromer’s superbly directed production continues the trend of shows like Once and Fun Home, which have expanded the parameters for musicals on Broadway in recent years, telling quiet, emotionally resonant stories that steer the form down surprising paths. By necessity, the performances, at least initially, appear to have gotten a fraction bigger in the transition from a 200-seat off-Broadway house to one four times that size. But none of the hushed intimacy, the subtlety or nuance of this narratively spare piece has been lost.

Adapting Israeli screenwriter-director Eran Kolirin’s 2007 film of the same name, composer-lyricist Yazbek, book writer Itamar Moses and director Cromer amusingly address the paucity of what would traditionally be considered plot with three lines of introductory text projected on a scrim: “Once not long ago a group of musicians came to Israel from Egypt. You probably didn’t hear about it. It wasn’t very important.” But from that self-effacing setup is woven a richly humanistic portrait of intangible but meaningful connections. It’s a story of Jews and Arabs in which politics and religion play no part; instead the show, with disarming simplicity and directness, contemplates people from different cultures thrust together in a literal nowhere, touching one another’s lives in ways both ordinary and illuminating. It’s less a culture clash than a caress.

The story begins at an airport bus station, where the Alexandria Ceremonial Police Orchestra, led with the utmost seriousness and professionalism by starchy conductor Tewfiq (Tony Shalhoub), is en route to the opening of an Arab Cultural Center where they have been invited to perform. But trumpet player Haled (Ari’el Stachel), who fancies himself a heartbreaker in the Chet Baker mold, gets distracted by the attractive woman behind the ticket counter. That and a tricky consonant land them not at their planned destination of Petah Tikvah, but in a remote desert town called Bet Hatikva. 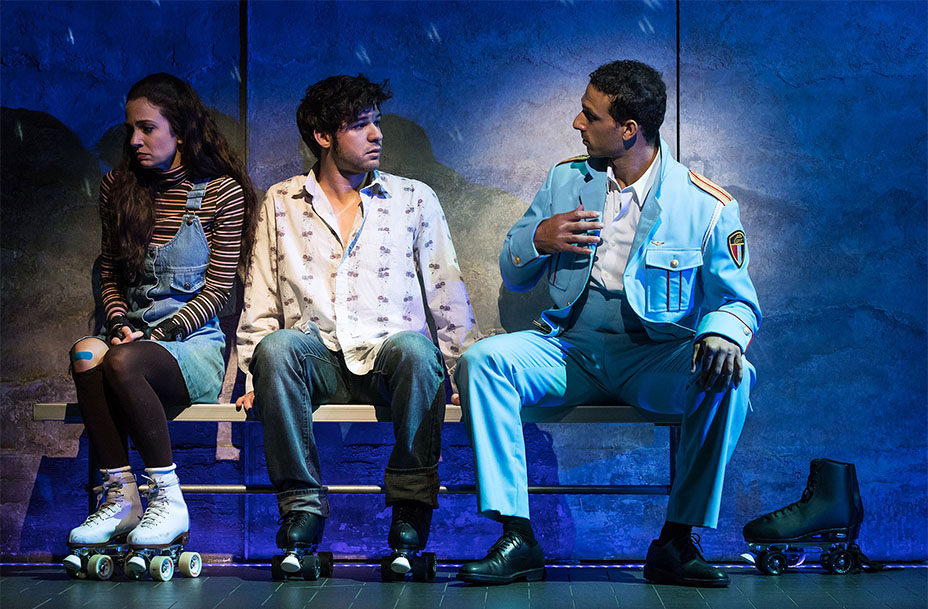 The evocative spell of Yazbek’s sinuous melodies and droll lyrics are apparent from the opening song, “Waiting,” which introduces the inhabitants of that sleepy fictional outpost as they mark time in their dreary existence. “Sometimes it feels like we’re moving in a circle/ Around and around with the same scenery going by,” one of them sings as he does exactly that in a funny sight gag, slowly propelled by the central turntable of Scott Pask’s sand-hued set. Tyler Micoleau’s ethereal lighting completes the vivid picture.

Front and center among the villagers, by sheer force of personality, is willowy local café owner Dina (Katrina Lenk), a sultry beauty who’s been around the block a few times, disappointment written across her face. When the police musicians arrive in their crisp powder-blue uniforms, they look almost like a surreal mirage. Welcoming the interruption to deadening routine, Dina sets them straight about the travel mix-up, and given that there are no more buses until morning, she organizes accommodations for them for the night.

Onstage bandmembers provide transitional music between scenes that gives a graceful fluidity to the interactions of various Bet Hatikvans and their guests. Clarinetist Simon (Alok Tewari), who got stuck after the opening bars of an unfinished concerto, and violinist Camal (George Abud) are put up in the home of unemployed slacker Itzik (John Cariani) and his unhappy wife Iris (Kristen Sieh). Over dinner with Iris’ widowed father Avrum (Andrew Polk), tensions in the marriage flare, with Iris storming out in what seems a regular occurrence, while Itzik gives an apologetic shrug. By contrast, Avrum’s song, “The Beat of Your Heart,” is among the more rousing numbers, recalling the first rush of love as if it were yesterday.

Haled tags along to give romantic advice to terminally shy Papi (Etai Benson), who approaches a double date at the local roller disco with an air of grim defeat. That scene change is accompanied to hilarious effect by a blast of Boney M.’s “Sunny,” while Papi’s slick alpha pal Zelger (Bill Army) zooms into view on his skates, arms raised high in triumphant self-worship. In the melancholy “Papi Hears the Ocean,” Benson sings plaintively of the sounds of the Dead Sea in Papi’s head when he tries to talk to girls, while his new friend responds with “Haled’s Song About Love,” a cool, jazzy pep talk, naturally delivered in a feathery Chet Baker whisper.

The show’s chief focus is the tender encounter of Dina and Tewfiq, whom she persuades to accompany her for dinner and an evening stroll. The divine Lenk (seen last season in Indecent) is simply wonderful as Dina’s world-weary numbness gives way to sly flirtation and then to dreamy romantic longing when she recalls the Egyptian songs and movies of her youth in “Omar Sharif.” While she’s loose-limbed and languid, Shalhoub’s Tewfiq remains stiff-backed and formal, though increasingly courtly in his reserved way. When she asks him to describe the sensation of creating music with the orchestra, and to sing for her in Arabic, the hesitant attraction between them is as moving as the distance holding them apart. 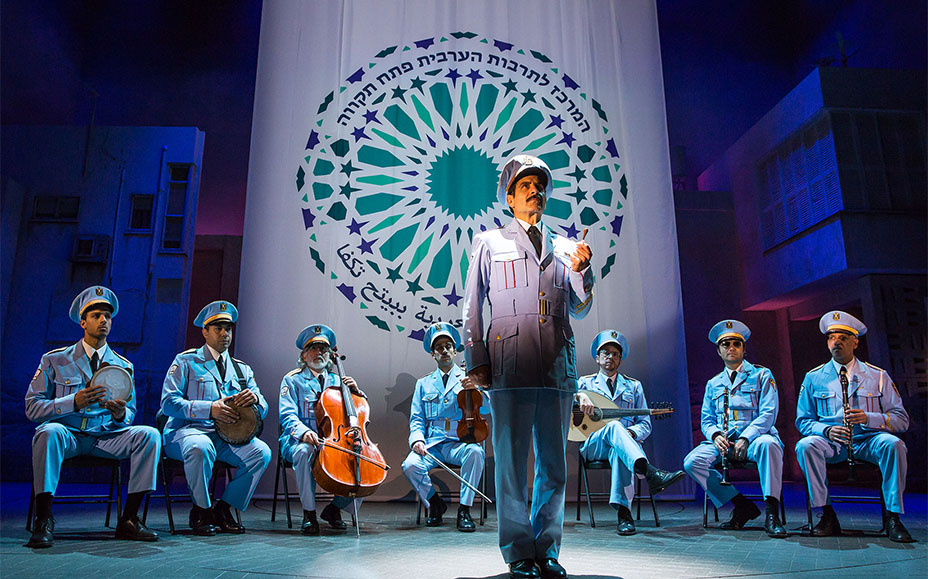 Shalhoub has possibly never been better, his every tiny gesture and brief glance revealing something of Tewfiq’s broken pride, his self-censure and his deep sadness and regret, all of which he reluctantly lays out for Dina, while never abandoning his careful composure. No less affecting is her descent from a momentary cloud as she returns to empty reality. The harmony of these two key performances, and the way the characters melt toward one another, even just for an instant, is exquisite.

Itamar Moses tackled similarly adventurous material for a musical in the under-appreciated jewel The Fortress of Solitude, co-written with composer Michael Friedman, who died tragically this fall. Here, the book writer works again with great sensitivity, threading gentle humor, moments of aching romance, glimmers of sadness and joy and piercing loneliness throughout to give the slender story real texture.

Director Cromer and the actors respond accordingly; the entire ensemble is attuned to the show’s quiet observations, and its unusual, funny-sad sensibility, generating performances that seem understated even when the characters are at their most forceful. Particular standouts, in addition to Lenk and Shalhoub, include Cariani’s Itzik, a sweet-natured, unassuming man, painfully aware that his dissatisfied wife regards him as an arrested adolescent, yet still helpless to change his nature — “just drifting along,” as he sings at one point. His lullaby to their sleeping child is lovely. And Stachel is an absolute charmer, uncovering unexpected depths in smooth-talking Haled.

It seems appropriate in an ensemble piece with so many finely etched characters that the stirring final song goes to one not even given a name. Identified only as Telephone Guy (Adam Kantor), he waits by the pay phone like a sentinel for his girlfriend to call, singing the passionate entreaty “Answer Me,” which evolves with the full company into a heartfelt collective expression of longing for love in the darkness. It brings the show to a poignant emotional crescendo. And it seems both generous and fitting that after the actors take their final bows, the musicians return to the stage alone to close with an exhilarating burst of upbeat music in which each instrumentalist gets his own virtuoso solo.