From its title and marketing campaign, you’d think the new musical Bandstand would simply be an exuberant paean to the joys of big-band swing. But there’s a gloominess hanging over this thematically ambitious show, written by Broadway newcomers Richard Oberacker and Rob Taylor. And why shouldn’t there be, since its troubled main characters include six World War II veterans and the widow of a man killed in combat. Uneasily attempting to be simultaneously a feel-good, swinging musical and a serious depiction of post-traumatic stress, Bandstand is at war with itself.

Arriving on Broadway after a previous run at New Jersey’s Paper Mill Playhouse (where this season’s A Bronx Tale also originated), the show centers on the burgeoning romance between Donny (Corey Cott), a pianist/composer attempting to restart his musical career after serving overseas, and Julia (Laura Osnes), the widow of Donny’s best friend who didn’t make it back. The musical’s dark themes are evident from the very beginning, with the sounds of explosions accompanying an impressionistic depiction of battle.

The setting then shifts to Cleveland, where Donny, who defines his ambitions in his powerful opening number, attempts to land a music gig only to be relegated to playing accordion at weddings. When a nationwide contest is announced, looking for a swing band composed of veterans to appear in a Hollywood musical, Donny rounds up a five-man crew (Alex Bender, Joe Carroll, Brandon J. Ellis, James Nathan Hopkins, Geoff Packard), all of them damaged in one way or another by their wartime experiences.

Having promised his dead friend that he would pay a visit to his wife if he didn’t make it back, Donny finally summons the courage to call on Julia, who’s living with her mother, June (Beth Leavel). He has a warm rapport with the young widow, and after learning that Julia sings in her church choir, Donny persuades her to get up and perform when she comes to see his band play. She turns out to be a natural. And her star quality and powerful vocals, not to mention her poems that Donny sets to music, propel the band to New York City for the final audition. But along the way they discover that the contest is more exploitative than they had been led to believe. 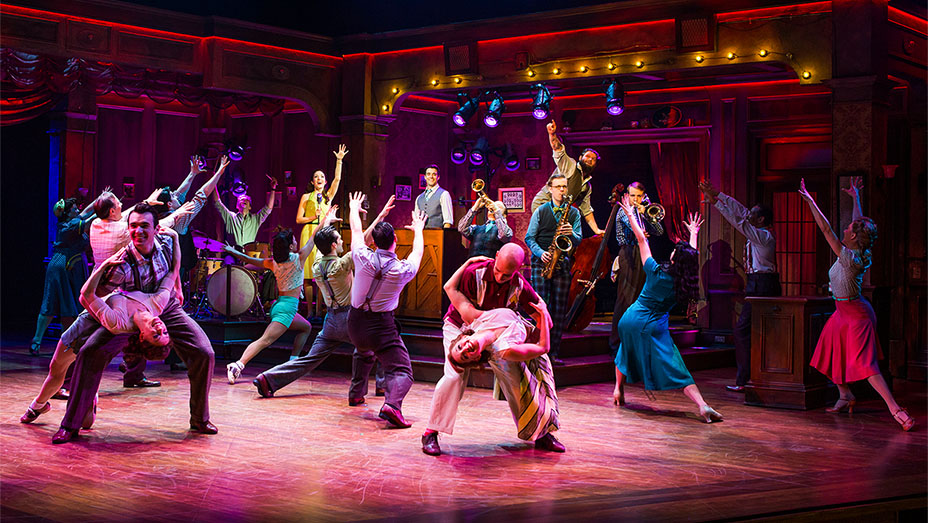 Taylor and Oberacker’s book proves a severely disjointed affair, blending cheap comedy (Julia’s last name is Trojan, leading to jokes you can easily imagine) with its depiction of the battle-scarred veterans dealing with physical and mental disorders. The band’s perpetually wisecracking bassist (Ellis), for example, turns out to have a serious drinking problem fueled by his memories of liberating a concentration camp. And the drummer (Carroll) is mentally addled from the effects of a debilitating injury. At times the proceedings feel like the classic film The Best Years of Our Lives set to music, with predictably awkward results. There’s a novelty factor in having the supporting cast playing their instruments for real onstage, and they fulfill their dual responsibilities admirably. But the skimpy character development prevents them from being anything more than one dimensional.

The score, too, leaves something to be desired. While many of the numbers have the propulsive feel of big-band swing, none of them are particularly memorable, and the generic ballads frequently stop the show dead in its tracks. The dramatic penultimate number, “Welcome Home,” most effectively incorporates the serious themes into the music, but it doesn’t exactly send the audience out on a high.

Director-choreographer Andy Blankenbuehler (a Tony winner for Hamilton) effectively stages the kinetic dance numbers that frequently evoke the show’s jitterbugging era. But they are too few and far between, resulting in a pace that lags for long sections, especially in the seemingly interminable first act. In any case, it’s hard to be whipsawed between exuberant musical numbers and such scenes as when Donny finally accedes to Julia’s request and provides a horribly graphic description of her husband’s death.

Cott and Osnes are highly attractive and appealing performers, and they sing the hell out of their numbers. And Leavel is so tartly funny as the mother that it makes you wish she had been given more stage time, not to mention better material. But for all the strenuous effort and good intentions evident in Bandstand, it mainly demonstrates that if you’re going to drop the name Dachau in a musical, it needs to be far better than this one.