When costume designer Mary Zophres was 6 or 7 years old, her parents opened a clothing store in their native Florida. It was right around 1973, the same year 55-year-old retired American tennis champion Bobby Riggs, formerly the world’s top-ranked player, challenged women’s No. 1 player Billie Jean King, 29, to a match in an unsuccessful bid to prove his dominance over any female on the court.

That groundbreaking face-off, which catapulted women’s equality and issues such as equal pay into the spotlight, is brought to the forefront of the cultural landscape once again in Zophres’ timely new film Battle of the Sexes, directed by the husband-and-wife team of Jonathan Faris and Valerie Dayton and starring Steve Carell in the role of the chauvinistic Riggs and Emma Stone as the triumphant King.

“There were things I was pulling from costume houses and I would remember my parents’ store,” says Zophres, who sought to imbue Battle of the Sexes with outfits and color palettes more true to her own recollections of the era. “I have a whole theory about what’s left from the ‘70s and just my own memories of it,” she adds, referencing the polyester shirts, paisley prints and drab shades of orange and green most often associated with that era. “I was really interested in trying to capture that and give a realistic spin on the story and the look of the film.”

The result: a primary-color saturated ode to the ‘70s, celebrating fashion both on and off the court. Here, Zophres opens up on everything from replicating King’s iconic match dress to reuniting with Stone and meeting the tennis icon herself.

What drew you to this project?

For one, it was shooting in Los Angeles, but that’s not the main reason. I really was a big fan of [the Faris– and Dayton-directed] Little Miss Sunshine — certainly from the past 20 years, it’s one of my favorite films, aside from great classics. I was very interested in meeting Jon and Val and working with them. And I thought the story was really good and it was really poignant for even today. It was also very striking to me how little had changed in terms of women and women’s rights and the pay scale and the glass ceiling. The equal pay issue was being talked about in the [last presidential] campaign. This was 40 years ago and we’re still going through this.

How did you go about researching the era?

I looked at a lot of photographs. Not only of the battle and about all the people, but just in general. And there’s so many ways to look at research, not just library research and book research. Flickr is a great source; people post their family photos and you can look through all of them. I am a big proponent of backdating [the clothes] a little bit — it doesn’t have to be right on the nose.

There is a lot of photographic research on the characters of this film, and we got to watch the whole footage of the match as well. We got a copy of the match as it was broadcasted — all the shots of the crowd. We couldn’t replicate what the crowd was wearing, but I was trying to impart the same feeling that we saw in the footage. 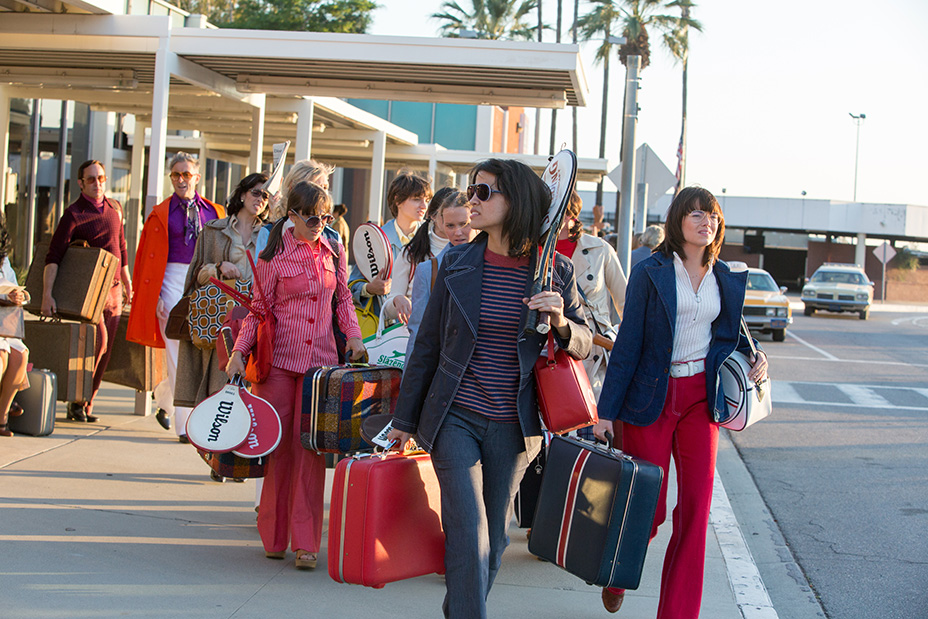 You also sought to portray a version of ‘70s fashion closer to your own memories of growing up in that era. How did you achieve that?

We wanted to do a color palette that was different than what people associate with the ‘70s — ochre and avocado green kitchens and browns. And we were noticing in the research that there were a lot of primaries. It was very much a sport coloring that we saw with all the tennis players. We used a lot of white, and we used navy blue and grass green and primary yellow and primary red. You look at a crowd, especially in the earlier games, and you notice that’s the color palette.

If you go into a costume house and you go into the ‘70s aisle, there are rows and rows of the polyester button-downs. They have a lot of prints and they have big, big collars. Polyester lasts longer than cotton does, and there’s a reason there are so many of them in the costume houses. In my memories of the ‘70s, people wore them, but not every single person. It was hard to find the stuff that I wanted, but I think that’s because it was used and it didn’t end up in costume houses.

Where did you source most of your pieces?

We shopped on eBay and Etsy. And we made a lot. We made all of Bobby’s cotton polos, just because a contemporary one just doesn’t work. We found a shape and body that we liked and we made them. For Billie Jean, we made all of her tennis dresses. People think the ’70s is easy, but you cannot find the ’70s in a thrift store. Some vintage clothing stores had it. And there are a lot of dealers around the country. You’d be surprised how many collectors there are and people collecting every decade and specializing in all kinds of things. The internet has opened up a plethora of sources.

After working on La La Land and Gangster Squad together, what was it like reuniting with Emma Stone?

We wrapped La La Land in October and we started prepping Battle in February and she was starting to bulk up. The first time I saw her for a fitting for Battle, her body had really changed and it was really interesting seeing. We had quite a lot of fittings. She would put something on and we would laugh between each other. Just to see the transformation of her was really interesting. Her body was such a different animal. She was such a delicate bird on La La Land, and she really muscled up for this role.

Any standout costumes in the film?

I love Sarah Silverman’s character, she played [King’s manager] Gladys [Heldman]. I did not make a single piece of her clothing. We found great pieces for her. She has a very specific style and she looks great. And Andrea Riseborough plays more of this California girl and her style is really different. There are nine girls in the Virginia Slim Tour and I tried to give each of those girls their own personal sense of style. They each had their own little closet, and I tried to be somewhat accurate to which character they were portraying. I was really pleased at how you get a sense of each of those girls, too.

For the film, you recreated the dress that King wore on the court to face off against Riggs. What’s the story behind it?

From the very first meeting I had with Jon and Val, we wanted to replicate the clothes [King and Riggs] wore in the match as best as possible. It wasn’t my favorite out of all the Billie Jean tennis dresses that I had seen doing the research. [Tennis couturier] Ted Tinling [played by Alan Cumming] had designed a dress for her, and they had their final fitting the day before the match. She hadn’t seen it and she felt it was too much. He said, ‘I have this other dress,’ and he pulled that one out. Because he knew the night before she was going to wear it, he sewed little rhinestone diamondettes in the center of the embroidered applique that crosses on the front and the back on the shoulder. She was going to be watched by millions of people and he thought she needed some pizzazz. So she ended up wearing Plan B. Nobody knows what happened to [the original dress].

Did you have a chance to meet and consult with King while working on the film?

Ah, the best part! She said, “Call me and ask me any questions.” But she came and visited during prep, which was really key for us because we were really trying to replicate that dress in the battle. She was, like, “You nailed it.” To hear Billie Jean say that was a big thrill for me.