Summer is coming this week — that is, the Baywatch reboot hits theaters on Friday. That also means the return of the iconic red bathing suit and swim trunks famously worn by Pamela Anderson and David Hasselhoff in the hit ‘90s TV series. But this time, they come with a modern makeover, courtesy of costume designer Dayna Pink, who brought a more athletic spin to the costumes.

“It’s a little daunting but so exciting to be able to touch a piece of wardrobe that’s so iconic and to be able to contribute to that history of what that’s going to be,” Pink, whose film credits include Crazy, Stupid, Love and Hot Tub Time Machine, tells The Hollywood Reporter.

The Seth Gordon-helmed Baywatch sees Dwayne Johnson as devoted lifeguard Mitch Buchannon and Zac Efron as new recruit Matt Brody, who is brought in to join the crew on the beach. Kelly Rohrbach, Alexandra Daddario, Ilfenesh Hadera and Jon Bass join the duo in trying to stop a criminal mastermind’s operation that threatens the bay.

Ahead of the comedy’s release, Pink chatted with THR about giving the iconic beachwear a new look.

You had the big task of re-creating the iconic red bathing suit — how did you approach it?

I really wanted to change it. I felt it was important to put my mark on it as a statement about what’s happening now in swimwear. So when I met with the director and talked about it, we came up with the idea of changing the color and adding zippers. I looked at all the trends in swimwear and I really liked the idea of zippers, neoprene and athletic things. So that was my inspiration, as well as just making it a love letter to the beach.

We updated the color as well — made it more of a ruby. We did a lot of tests on the fabric. You can only imagine what my office looked like with little swatches of red hanging everywhere (laughs). We took a little bit of the orange out and added blue, so the red is really saturated. There’s a little sheen as well. The bathing suits were made from a combination of a few different stretch fabrics that we dyed our new Baywatch red and blue. It was all inspired by neoprene, but ours were not actually that thick. 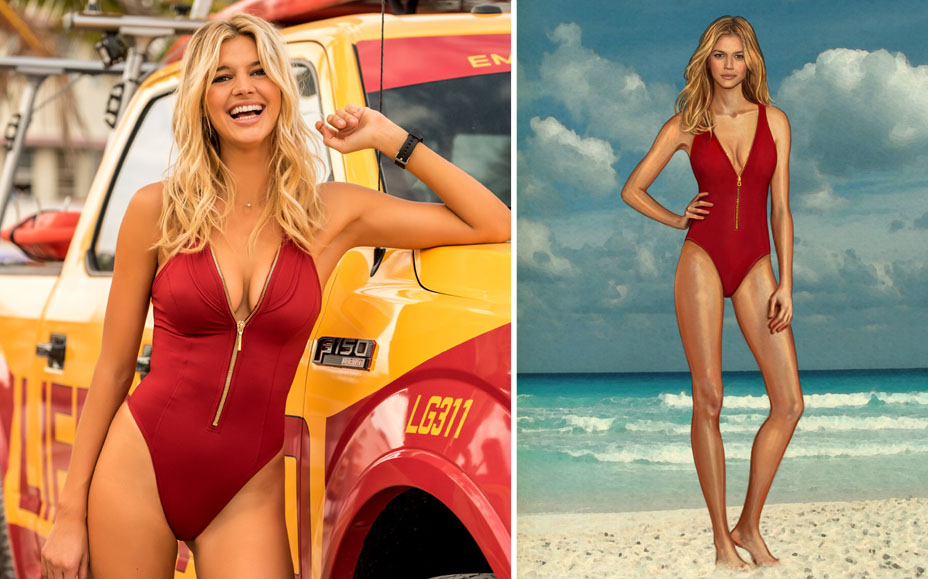 Instead of having the ladies all wear the same one-piece bathing suit, they each wore a different silhouette.

Part of it was helping tell the story of who these girls were, who these characters are. I liked the idea of not just having one bathing suit anymore. Let’s say you go work at a place — you get to pick three different things or pick from a selection, which one are you going to pick? Because what we wear obviously tells a story of who we are.

Stephanie [played by Hadera] is more buttoned up and more professional; she wears the long sleeve one zipped up pretty high. Then there’s CJ [played by Rohrbach], who’s sexy and fun in a different way. CJ has a bikini. When she wears a one-piece, it’s zipped down a little lower. And Summer [played by Daddario] has the vest, which is very sporty, because her personality is more sporty. Those different silhouettes helped to tell the story. 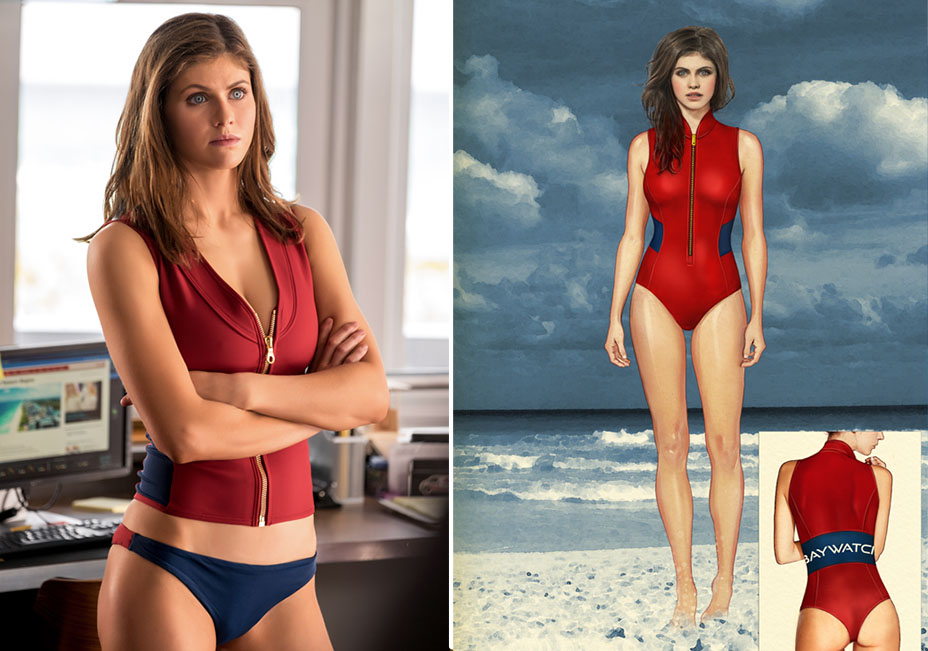 How did you decide on this particular red?

We just started thinking about how to modernize it and what it was going to look like, what trends are in colors. I also thought about the color in the environment — on the beach, next to the water, next to the sand, on the tanned and oiled skin. I thought of that deep, deep ruby red and a gold zipper, but it’s a matte gold. To me, that combination was amazing. Then we did a camera test, so we tested the different colors and you have to test the fabric when it’s dry, but you also have to see what happens to it when it gets wet. We would stand in front of it with water bottles and spray the fabric to look at it (laughs).

Then there are the guys, of course. How did you modernize their swimwear?

Mitch, which is Dwayne’s character, he’s king of the sea, No. 1, so he has his own and nobody wears what he’s wearing. His fabric was a little different as well — he had stretch. The other guys did not have stretch. The silhouettes are a teeny bit different; the trunks are longer than they were in the original and there’s an athletic vibe as well. We did everything in red and blue, instead of just red. I liked the juxtaposition of those two colors together against the water. It just felt so American to do the red and the blue. 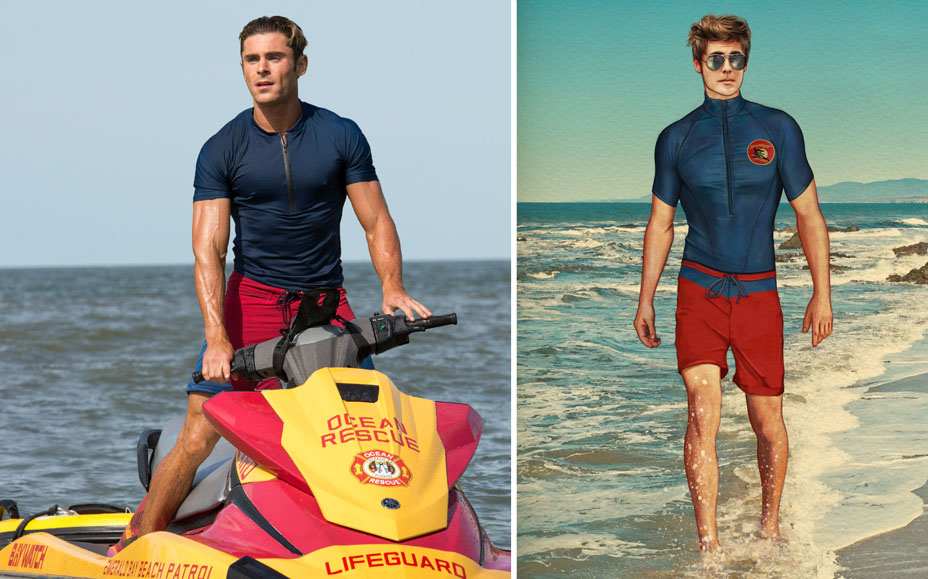 The words “lifeguard” or “Baywatch” were added in white on the suits. What led to that decision?

It’s the red, white and blue element, kind of like the All-American thing. The original had a patch, so we considered doing a patch as well, but it just didn’t read as well. To me, if you noticed in the back of CJ’s bathing suit, how it said “lifeguard” on the back, it’s professional and it looks like a uniform. We chose to do letters as opposed to patches, and I think it was aesthetically a better choice.

There were a lot of great moments with the accessories, especially with Stephanie’s gold earring cuff and the men’s sunglasses.

Accessories are one of the hardest things to do because when you’re thinking about what people wear — some people wear things every single day. Accessories are really signature parts of people’s personality. They’re very specific and really important because you do see them in the movie.

Stephanie’s accessories, we made those a little badass — her character is tough as nails, super smart, super buttoned up. To me, there’s a little shield component to that ear cuff you’re talking about. There’s something a little superhero-y about it. 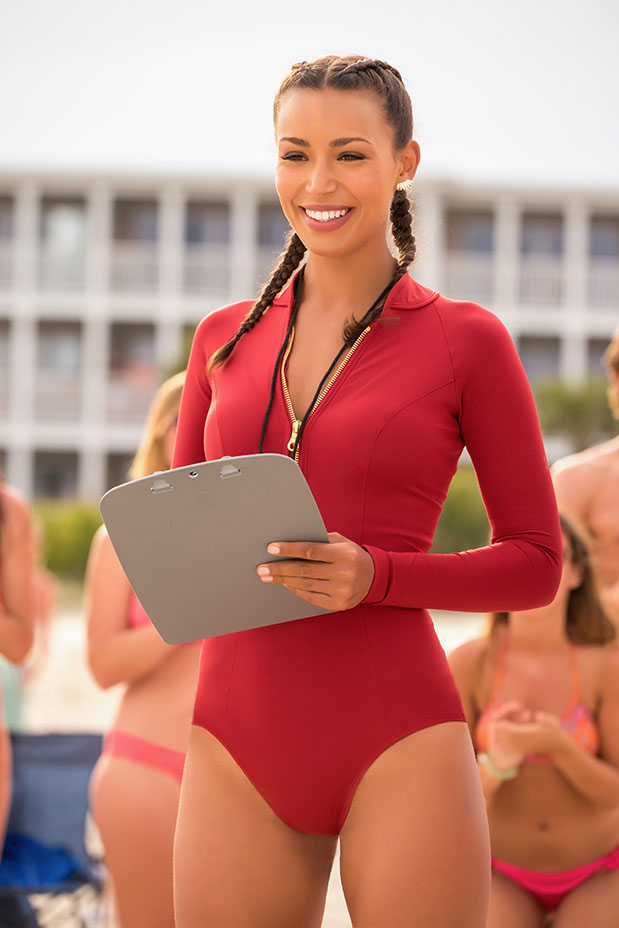 The glasses for Dwayne were from Sama. I loved those glasses because they also have a superhero element to them in a way. They are very much shields. They also have a yellow mirror aspect to them. The complement of that color next to his skin, next to the beach, next to the red — I just thought it was a perfect combination. Zac’s sunglasses were Randolph Engineering. 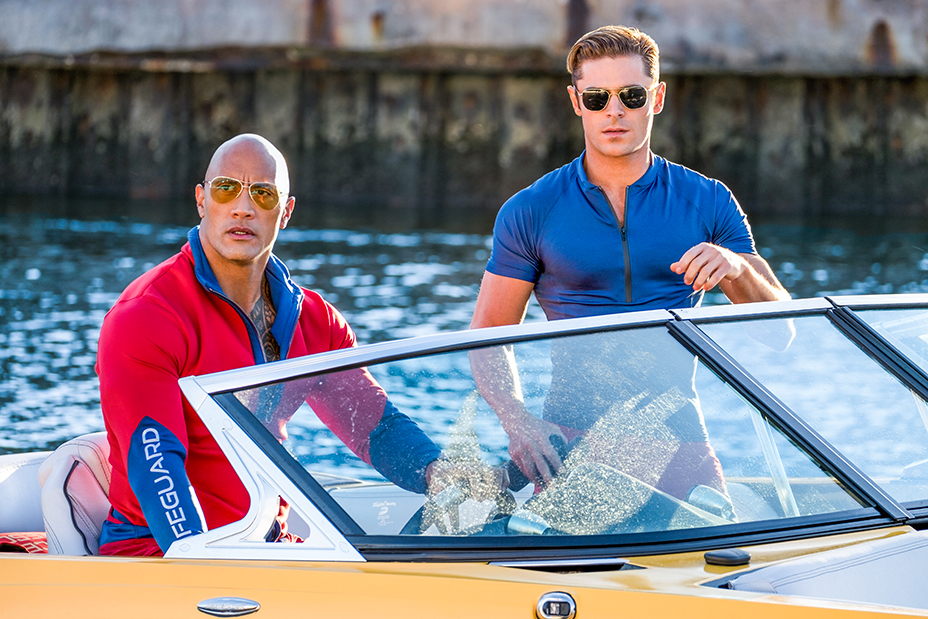 Then there’s Priyanka Chopra, who plays Victoria Leeds, this super-sexy villain. How did you go about creating her look?

She was very high-end, very fancy. She’s so beautiful and so easy to dress. We wanted to make her kind of badass. She doesn’t see herself as a villain, she sees herself as the hero who’s saving the bay. I like the idea of seeing her in white at first. She’s kind of crisp and innocent and fresh. 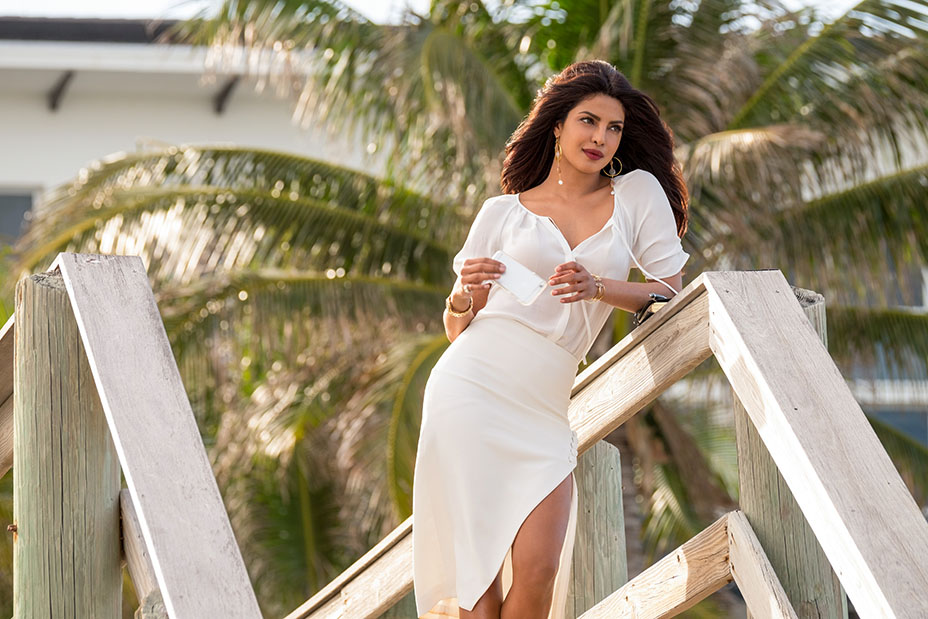 It isn’t until the end when she gets super dark and that ending dress, when she’s on the barge, we made to fit into the action that she was going to have because she was climbing up those stairs so there was a big slit up the leg and she had a gun holster up on her thigh that you could see. When we knew what she was going to be doing, I added that big piece on her shoulder that flowed in the wind, because we knew it was going to be windy. So we built these two long pieces coming from her shoulders. And we used the metallic fabric, so when the wind hit it, it would really kind of pop. I didn’t want to put her in a light color, so we found a way to keep the color dark but to add color and shine to still be able to see it in the dark.

I shopped at Saks, Neiman Marcus and Barneys for Priyanka, as well as designed and made some of her looks. We worked with Christian Louboutin to have him create the silver shoes for the ending scene with her. They were sexy and spiky and shiny, which really worked for the night scene. 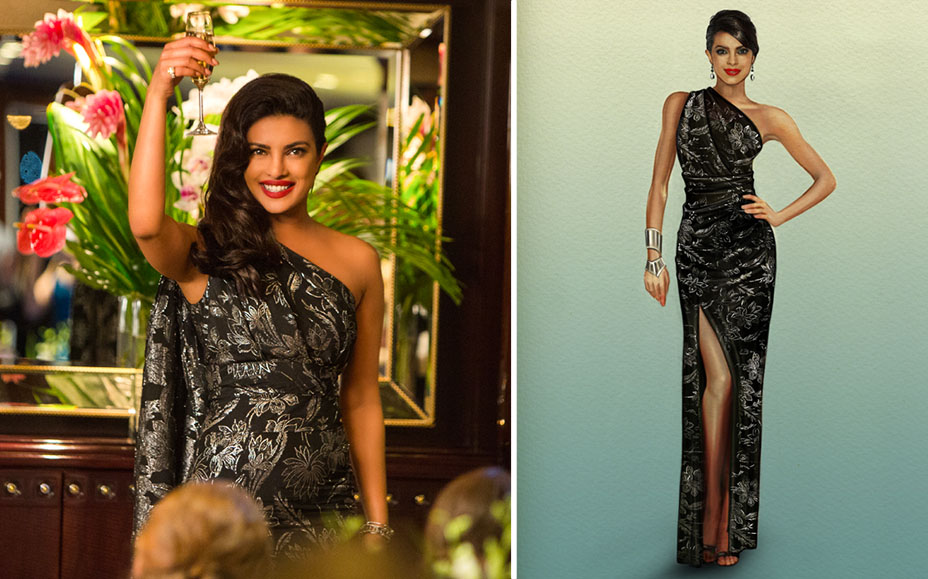