Beanie Feldstein loves being a best friend — in films and in life. “I love the expression, ‘Friends are the family that you choose.’ That’s always been true to me, ever since I was a little kid,” the 26-year-old tells The Hollywood Reporter. But after her breakout role in Greta Gerwig’s Lady Bird, Feldstein (whose brother is Jonah Hill) is quickly solidifying her place as the queen of female coming-of-age films, starring in Olivia Wilde’s Booksmart alongside Kaitlyn Dever and in the upcoming adaptation of Caitlin Moran’s How to Build a Girl. The Wesleyan grad talks to THR about collaborating with Wilde, her comedy heroines and the director with whom she wants to work.

What draws you to coming-of-age films?

When I was young, I grew up mostly watching films about boys. So, it’s been such a true privilege in my adult years to get to bring female coming-of-age stories to the screen. I know that if I’d had those movies when I was 14, 15, 16, they would have had such an enormous impact on me. I love the coming-of-age genre, and I’m only going to be young for so long.

Do you ever worry about being typecast?

If I love the character and I love the people making the story, then I’m not too concerned about being typecast. There have been a few [projects] over the years where I have felt like it’s putting me in a box that I’ve just not auditioned for or done, but every project I have done has just felt like, “I can’t believe they’re saying yes to me!”

What challenged you the most about doing Booksmart?

I was really intimidated by the character of Molly. When I read it, I kept saying to Olivia, “Are you sure?” And she was like, “I’m sure. You’re Molly.” She has the most incredible instinct and was so confident in Kaitlyn and me that I knew I couldn’t go wrong. But the level of intensity that was on the page for my character was so high that I was worried. 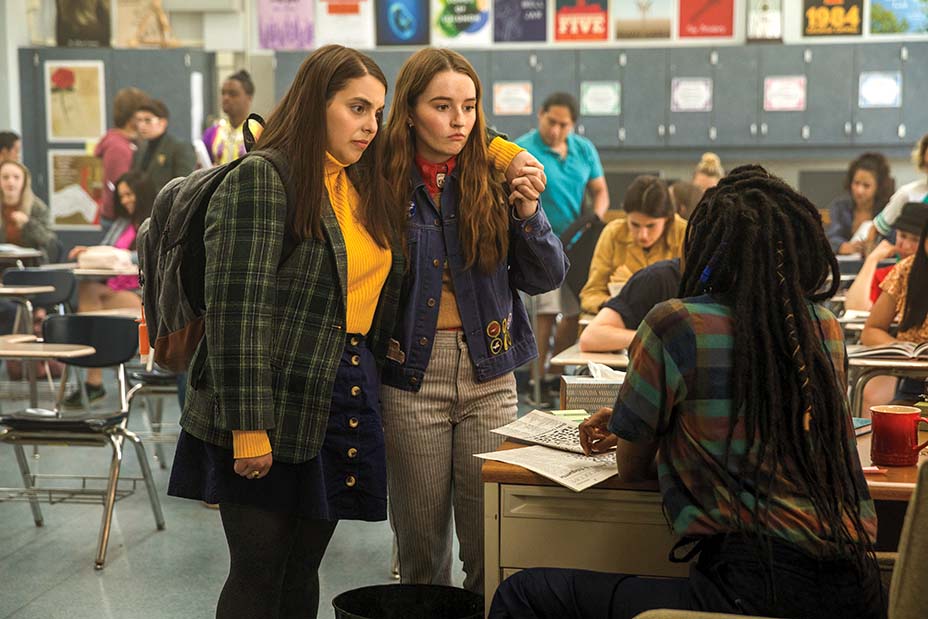 Energetic. Warm. Wise. Almost the entire movie was a night shoot, and Liv was like a burst of energy every night. She’s also just incredibly inclusive, and she’s just the coolest woman in the world. Maybe I should’ve said “cool.” As a younger woman, I was just really in awe of her. I feel like I will take the energy that she brought on to Booksmart with me in every project that I do.

Who are your comedy inspirations?

My comedy inspirations have always been Melissa McCarthy and Kristen Wiig. Seeing Bridesmaids in theaters senior year of high school on opening night was like the best night of my life. Me and my best friend still talk about it. It was our most favorite moviegoing experience ever, and it really changed the way I looked at women in comedy. I think I’d never seen women be as wild and witty and funny and warm and crazy as the men usually are in comedy. I was so lucky to see it at 17, that I kind of felt invincible by it. I was like, “I can do anything! I can be anything! I can make any movie I want! I can play any outlandish character I want!”

You’re a big Sondheim fan. How has your love for musical theater impacted your acting career?

The reason I love Sondheim is because there’s no musical theater composer who’s captured the complexity and intricacy of humanity in his melodies and lyrics the way he does. So, when I have had the privilege — even just in my bedroom — to be singing his songs, I feel connected to humanity in a way that every actor dreams of feeling. That’s why I’ve always loved him. I think growing up in musical theater is such a beautiful foundation for being an actor, because you get to sing your thoughts, and then even if you’re not singing, you still understand how to access that internal feeling and then externalize it.

What stories do you wish you saw more of being made in Hollywood?

I think it’s [about] giving opportunity and access to individuals that haven’t been given that access throughout history in our society. Women, people of color, the trans community, the LGBTQIA community at large … I want the industry to give marginalized people that power — the power of directing, the power of producing, the power of creating their own stories.

If you could pick any director to work with, who would it be?

This might be a given of an answer, but my brother is the most extraordinary director, and after I saw him [direct] mid90s, I was like, “Oh, wow.” I would just love to be in his film one day.