For Timothee Chalamet, the most challenging scene of the addiction drama Beautiful Boy wasn’t a wildly emotional moment with his character’s father, but a rain sequence in which his face is hardly shown.

Chalamet plays Nic, a young student addicted to crystal meth, who escapes his rehab facility in the scene. His father David (Steve Carell) goes searching for Nic in the rain, driving down an alley in San Francisco to find him in a soaked tee before rushing him into the car.

“That was just grueling to shoot,” said Chalamet, who lost 18 pounds before filming. “Physically, it was certainly not close to what someone going through this would be going through, but in terms of the shoot, the frigidity of it, that was the most challenging day.”

At the U.S. premiere of Beautiful Boy at the Samuel Goldwyn Theater, Carell said his most challenging scene was a more tender one, in which David receives a desperate call from Nic but chooses not to help him get sober again. Whether from lack of hope or lack of strength, David tells Nic that he’s on his own.

“I think that goes against every fiber of every parent’s being,” Carell told The Hollywood Reporter of the scene that has the character crying on a couch at home. Carell said having two teenagers “absolutely” shaped the way he viewed the script, saying, “I don’t think you ever stop worrying about them until the day you die.” Through his performance, he realized having no ability to keep your kids safe and healthy has to be “the scariest thing of all.”

Writer/director Felix Van Groeningen chose perhaps the most buzzworthy performance as the most difficult scene. David and Nic meet in a diner after Nic has returned to drugs and is living on the street. David wants to order food and convince his son to return home, but Nic only wants money, begging for just a couple hundred bucks to go to New York, as a guise.

“What they pull off there is just so breathtaking, because it’s like a tennis match,” Van Groeningen told THR at the premiere, presented by Amazon Studios and Audi. The three of them went over “the logic” of that scene in every rehearsal and through long talks, because of its importance, even rewriting parts to “make it theirs.”

“There’s so much playing. There’s the guilt of being an addict, because Nic is aware of where he is,” Van Groeningen said. “What needs to happen to me as a director, I need to cry behind my monitor. And when that happens, then we’re good.”

He cried all the way through the shoot. That day, everybody on set was crying, he said. They shot the eight-minute scene 20 times — each time in one go. 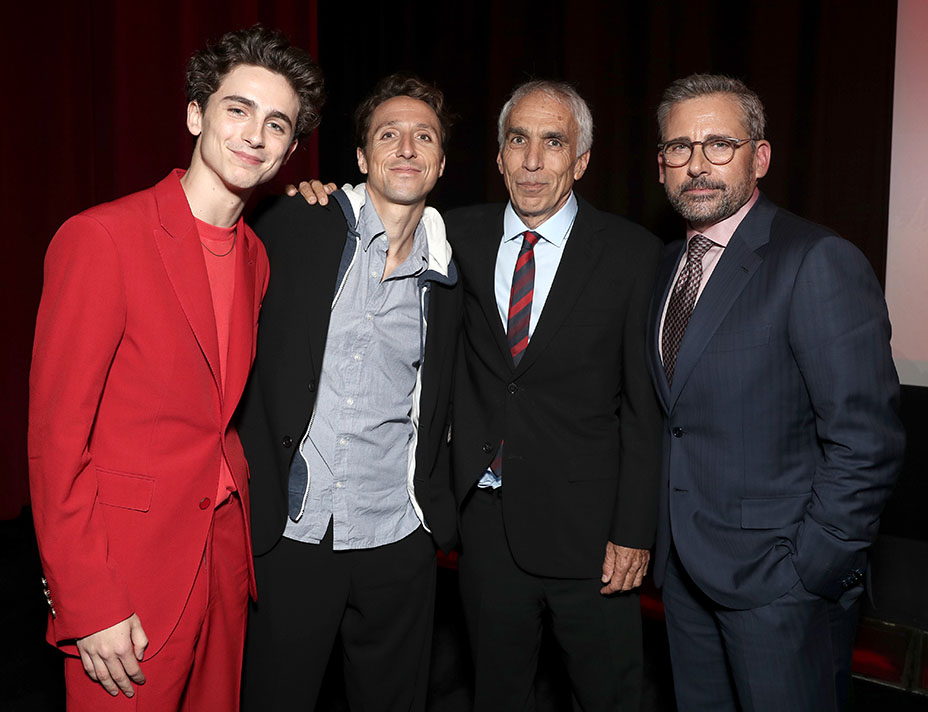 Chalamet likes that Beautiful Boy isn’t a tragic story, nor a glorious story. The addiction tale is told from a “total perspective,” based on the best-selling memoirs of father and son David and Nic Sheff, Beautiful Boy and Tweak, respectively.

“That encompassed addiction in a contemporary sense, in a way that I just hadn’t ever read anything like that,” Chalamet told THR. “Movies or books that I’d been privy to prior that dealt with the subject matter felt like they lean into the tragedy of it or into the glory of it somehow.”

He said the beauty of the books, especially the “encompassing arc” of Beautiful Boy, was how “moment-to-moment and urgent and real it felt” because of the point of the view of the father. While filming, however, he didn’t focus as much on David’s memoir, but was in full “Tweak mode.”

“It’s hard as an actor, maybe some people can do it, I really can’t, to be talking from a narrative point of view — Nic didn’t know what his father was thinking, so it didn’t feel right for me,” Chalamet said.

Like Chalamet, Carell said he was drawn to the urgency of the film, exemplified when the credits explain that overdose is a leading cause of death.

Carell added, “It’s very timely. It’s what’s happening today.” But as dark as it is, as “harrowing” an experience as what the Sheffs went through, “I also thought it was a lovely story. There’s a beauty in it, in their relationships and in this idea of family,” he said. “Ultimately I think there’s a sense of hope to it.”

At its core, Beautiful Boy is a story of “unconditional love,” Van Groeningen added. The film opens Oct. 12.