Emma Watson’s yellow ball gown in Disney’s live-action remake of Beauty and the Beast may be the talk of the internet, but that’s not all that stood out in the highly anticipated film directed by Bill Condon. There were the accessories, too, which required just as much thought — and that’s where Oscar-winning costume designer Jacqueline Durran came into the picture.

One of the standout accessories, worn by Watson’s Belle, was a gilded hair piece that held her bun up with her half-up, half-down ‘do. “It had a predecessor in the animation and it also has a plot function because she has to pull the metal out of her hair ornament and unlock the lock in the cart, so it had to have these certain elements,” Durran told The Hollywood Reporter.

'Beauty and the Beast' and Its Unprecedented Oscar Run in 1992: "It Was a Giant Moment for Everyone"

“Emma really liked the feather motif because she felt it was part of the way she was interpreting the lightness of Belle,” said Durran of the hair accessory designed in-house. “It just seemed to fall into place so that it would be a feather motif hair ornament.” 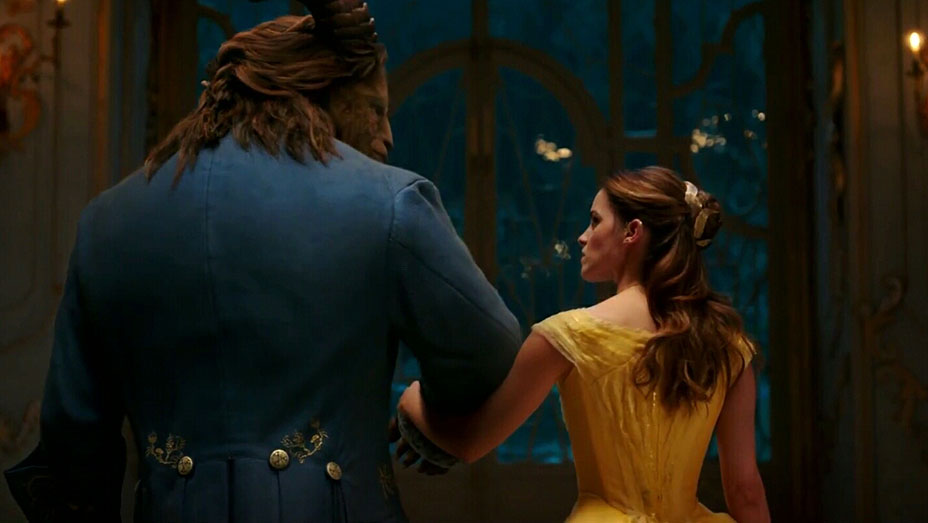 There was also Belle’s dazzling ear-cuff and necklace.

“The thought process behind those were that everything that is worn in the castle is created in the castle, so it has to sort of partake in the magic enchantment of the castle itself. It was trying to capture this organic sense of that and the way the castle moves and evolves,” explained the designer. “In the production design, the stairs are twisted and in some places they’re broken or still moving. We would be trying to mirror that sort of idea in these two pieces of jewelry.”

The ear-cuff “sort of grows around the outside of the ear and looks like a gold plant that’s still growing,” Durran described. Meanwhile, the necklace is “like a tree of life that’s still in motion.” 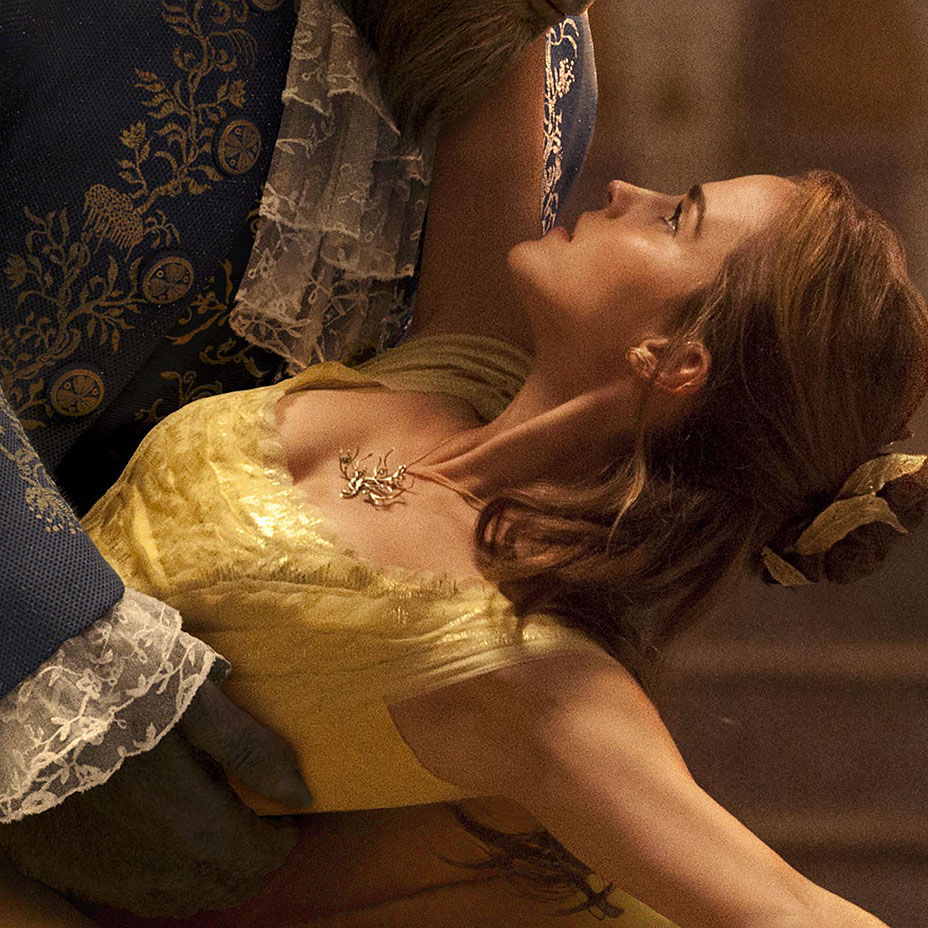 Watson’s commitment to wearing sustainable designs didn’t only take place during the film’s press tour — some of her costumes were eco-friendly, too.

“As a department we always try to see if we can get fabrics we want from sustainable sources, but we made a lot of costumes for Beauty and the Beast and I think the rough estimate is that we managed to buy 75 percent of those fabrics from sustainable sources, so that was a great thing we were trying to do,” shared Durran, whose work in Pride & Prejudice earned her an Academy Award.

The costume designer took it one step further, and for the first time, she created a “completely eco-friendly, sustainable costume” with the red cape worn by Belle.

“We didn’t really know, when we started, how to do that and we got a set of criteria from Eco-Age, who told us the boxes that we’d have to tick and then we just followed that through,” noted Durran, whose team used fabrics that were either vintage or sustainable. The border of the cape was also made from recycling old wood from the carpenter. Eco-Age has been verifying Watson’s red-carpet wardrobe as well.

“That was an experiment that we were all interested in,” said the designer. “It was very labor intensive. It would be difficult to roll out as an entire production, but just in learning the techniques, you increase your knowledge and the potential to enlarge that sort of work.”

Though the red cape took a while to create, it was the yellow gown that took the longest, clocking in 270 hours of labor.

“I feel that it ended up as a sort of re-interpretation of the animation. When we first started designing the yellow dress, it was to make something more historical, but we experimented with it, but it wasn’t universally accepted so we moved on,” Durran said, adding that the dress was made of circular layers of satin organza.

“In the end, we came back to what was actually a simple dress,” Durran continued. “It’s about Emma having the feeling of freedom and the ability to move. It couldn’t be a dress that was so big that she couldn’t run in it or ride a horse in it. What I wanted to do in that simplicity was to emphasize the lightness and movement of the dress.”

Beauty and the Beast opens in theaters March 17.