Shortly after Melanie Griffith was nominated for an Academy Award in 1989 for her performance in Working Girl, she went to London to promote the film. With legendary publicist Elliot Mintz in tow, she was browsing in Knightsbridge’s Beauchamp Place when a fairy-tale white gown with an enormous skirt at Emmanuel Boutique caught her eye.

“I thought it was just beautiful, and I bought it,” she says of her Oscar dress, designed by the same couple, David and Elizabeth Emanuel, who created Princess Diana’s iconic wedding dress. When Griffith took the stage in April to present the award for best supporting actress with then-beau Don Johnson, her decolletage was nearly as impressive as the gigantic skirt. “I didn’t know I was pregnant with Dakota at the time I bought it and my boobs barely fit into the dress,” she says.

It was the perfect princess gown for Griffith, though now it seems over the top, says red-carpet critic and author of 100 Unforgettable Dresses Hal Rubenstein. “You look at it and gag. But in the ’80s, there were people who wanted that dress,” he said. “You could imagine that girl from Working Girl wearing that dress.” 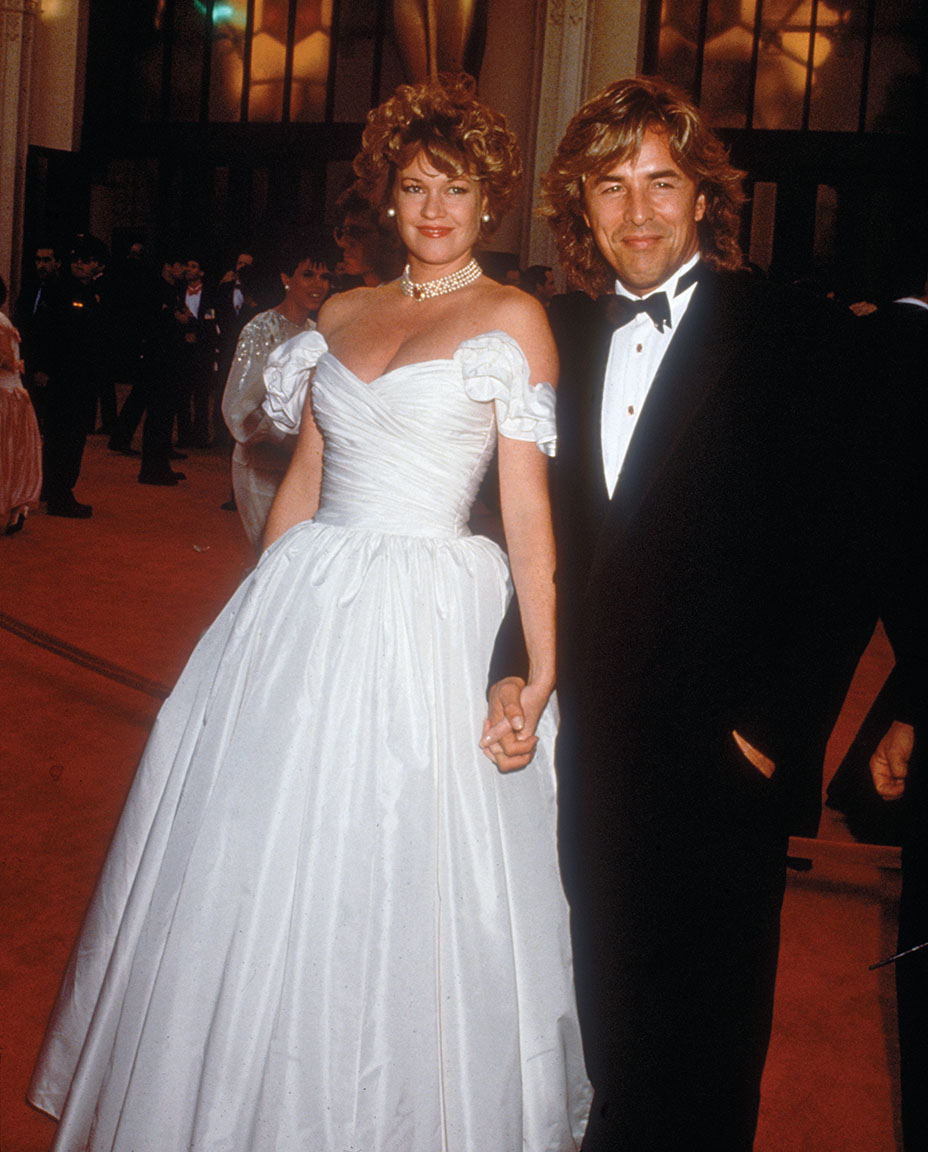 The best actress Oscar that night went to Jodie Foster (for The Accused), who wore a blue strapless sheath in ruched taffeta with an inexplicable bustle-like rear flounce. In years to come, that getup routinely would be cited by fashion experts as the kitschy “before” to Foster’s tastefully Armani-clad “after.” But, to Foster, the dress is still magical.

“I bought it with my mom. We saw it while passing by a shop window in Rome. I have no idea who was the designer,” she says in an email. “I loved the color and it made me feel full of joy. I know…not my most sophisticated fashion hour but perhaps the happiest.”

Long before Joan Rivers took to the red carpet with a continual chorus of “Who are you wearing?” and designers started paying seven figures to adorn A-listers — not to mention the growth of a cottage industry that includes glam squads, photographers and studios — there was a span of about two decades without stylists. 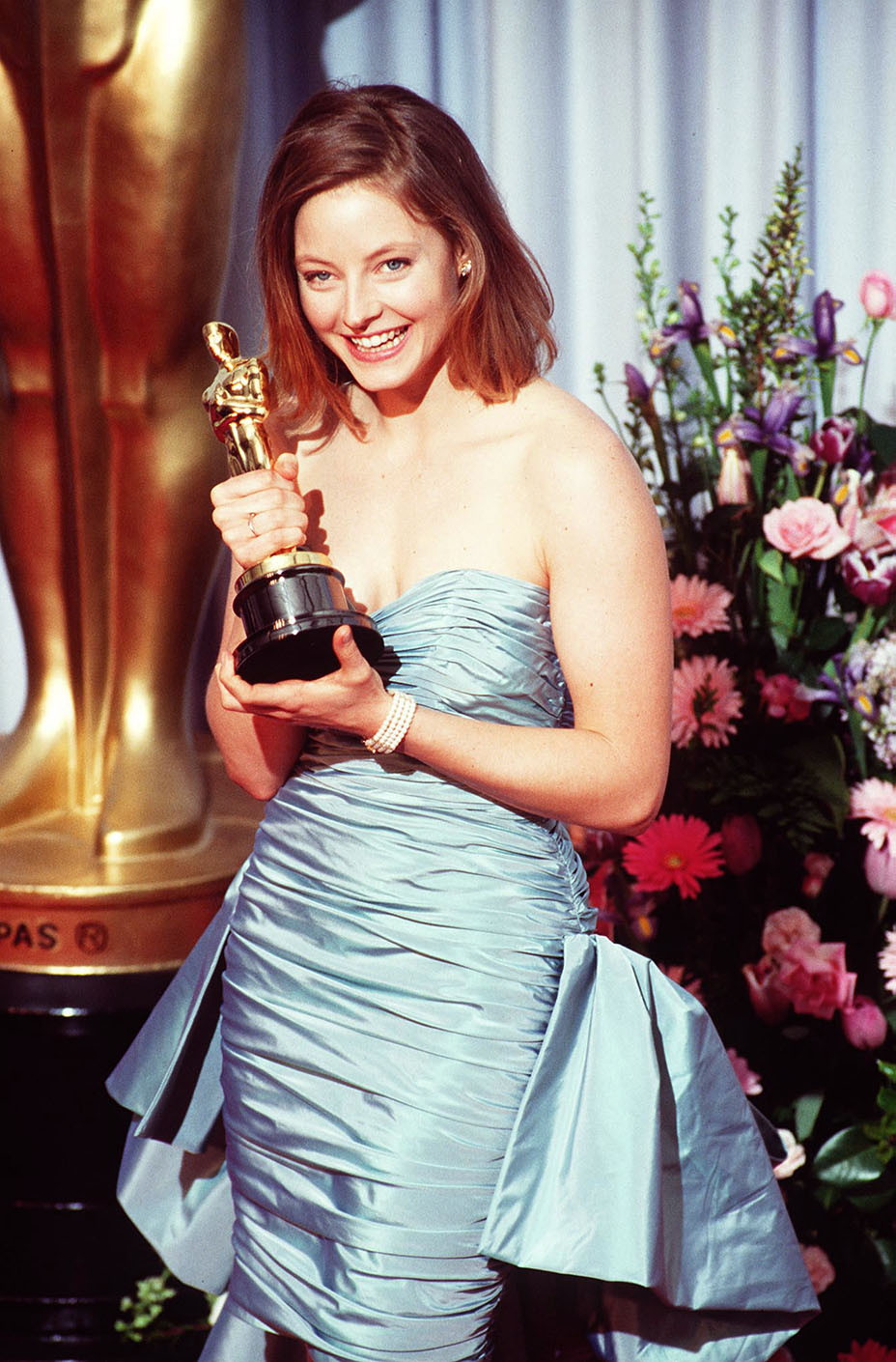 Stylists today function in the same way that costume designers did in the bygone days of the studio system, explains historian Deborah Nadoolman Landis, Academy Award-nominated costume designer and founding director of UCLA’s David C. Copley Center for the Study of Costume Design. “That was our job, before the stylists and the labels,” she said. “It was our role to costume the contract actresses for their public and private persona — because they were the same thing at that point.” By the ’60s, the studios started breaking up: “It all came apart when the studios lost their contract players and their contract costume designers,” she says.

Around that time, a Broadway sensation moved west to make her first film. Barbra Streisand, the star of Funny Girl, won best actress for her performance in the film adaptation and was invited back the next year in 1970 to present best actor. She appeared in a pale pink gown dotted with sequins and unexpectedly topped off with a matching pillbox hat, dubbed “a nice bar-mitzvah-mother ensemble” by Women’s Wear Daily. “I worked very closely with Arnold Scassi on many outfits like this,” Streisand says of the clothes she ordered for visits to Canada during her romance that year with then-Prime Minister Pierre Trudeau, father of current PM Justin Trudeau. “I often wore the empire cut; it was so comfortable. And I love the color pink.” As for the pillbox? “I was too lazy to have my hair done so I made a series of these matching hats so that I just had to part my hair in the middle, pull it back and wear the hat!” 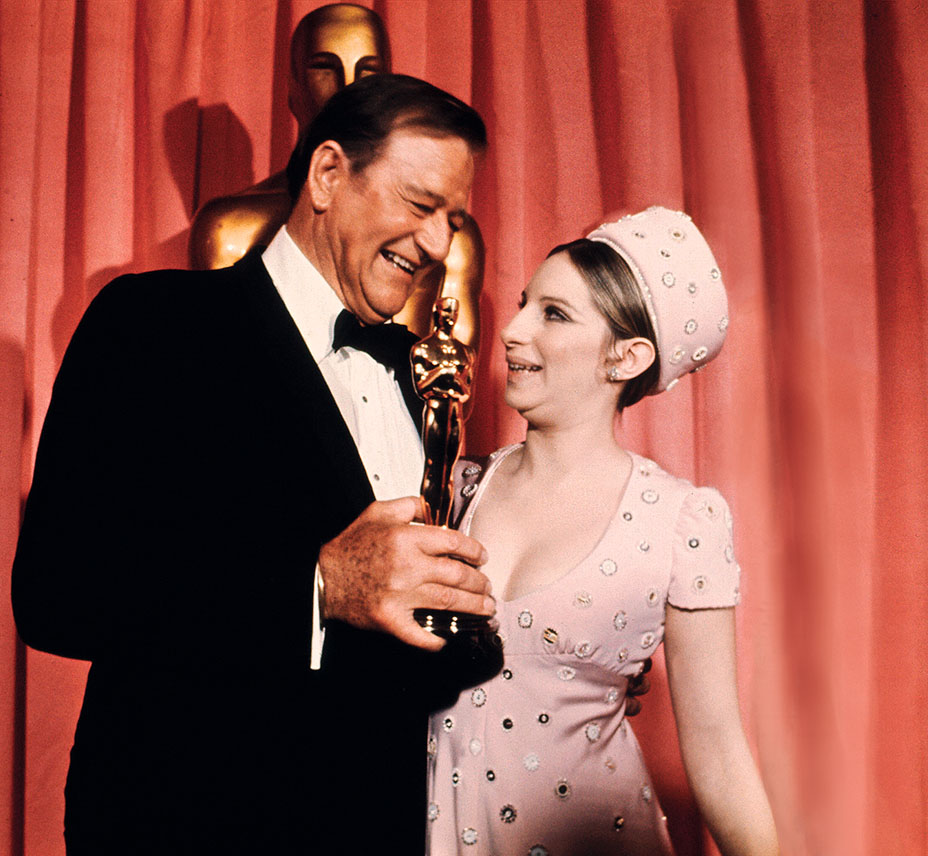 The actress most famously unconcerned with her Oscar outfit was Diane Keaton, best actress winner in 1978 for Annie Hall. As if channeling her character, Keaton wore a tweed blazer over a white shirt buttoned to the top button, a draped woven scarf and lapel flower pin and, below, what appeared to be two layered skirts worn over a pair of trousers with high-heel sandals and patterned socks. As Keaton herself said proudly in a 2004 InStyle interview, “Now that’s a memorable outfit.”

Other times, left to their own devices, actresses would reach out to designers themselves. In 1984, Amy Irving was nominated for best supporting actress for her role in Streisand’s directorial debut, Yentl. “I was living in New Mexico when I got the call that I had been nominated,” Irving recalls. “It was the year that Ralph Lauren had been inspired by Santa Fe and his clothes reflected my home. So it was a no-brainer for me to ask him to dress me. I loved what he came up with: a white blouse made from antique lace material, a full-length black velvet skirt, black turn-of-the century lace-up boots, all topped off with a gorgeous turquoise and silver concha belt from his private collection. I felt wonderful in it.” 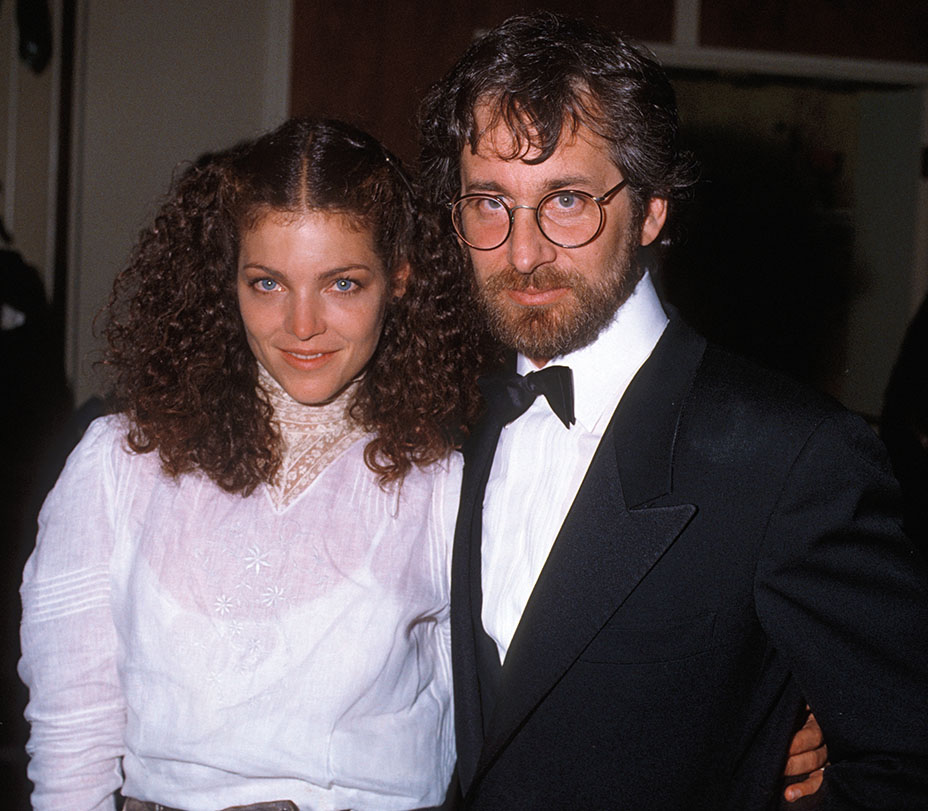 And yet today it’s impossible to find a full-length photograph of Irving’s ensemble, as the red carpet as we now know it barely existed and attendees just made their way inside the auditorium all at once. “In the 1980s, there was not the same pressure to come up with ‘the dress’ as there is today. Things were more relaxed,” Irving said. “But that didn’t stop the press the next day from giving me thumbs-down on my outfit. They thought I looked too Little House on the Prairie. … I loved that, too!”

Another actress who stayed true to her own authentic style was Sissy Spacek. When she received the 1980 best actress award, her casually gathered hair and unshowy attire were miles away from her portrayal of the primped and pulled singer Loretta Lynn. “Joe Tompkins was the costume designer for Coal Miners Daughter. When I was nominated, I turned to Joe to design a simple, silk, one-piece jumpsuit,” Spacek tells THR in an email. “It felt perfect and my tomboy spirit was happy.” 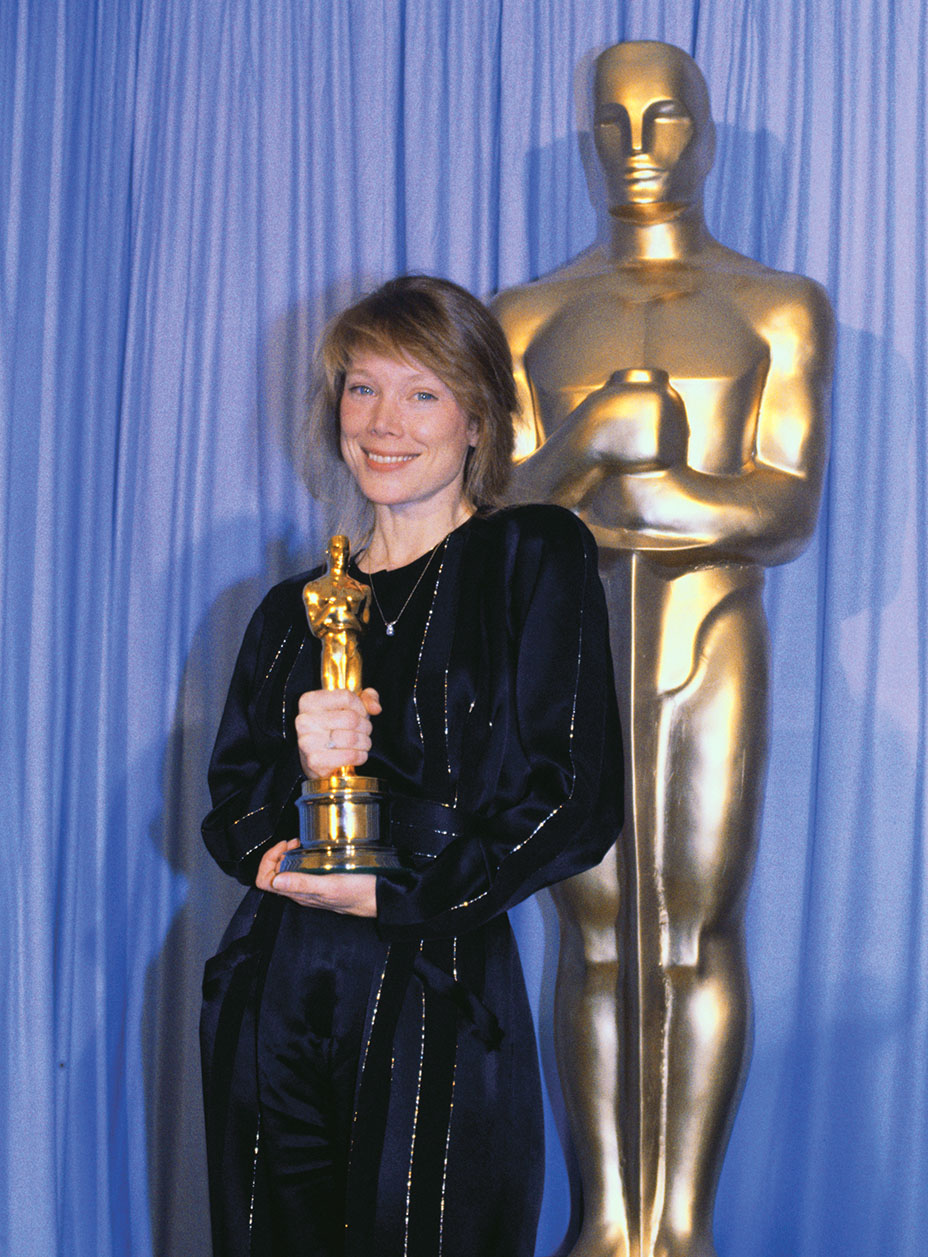 In 1990, Kim Basinger showed up in a white ballgown, albeit one with a split personality. On one side, the bodice was a strapless corselet; the other was with a half-jacket with mysterious writing appliqued on the long sleeve. And the effect bore the unmistakeable influence of the singer Prince, with whom she’d had a relationship. “It was a surprise to all of us when we saw it, we did not make it for her,” said Helen Hiatt, Prince’s costume supervisor of the era. “Prince is all half-and-half though, male/female, Gemini — and I’m sure Kim thought it was a really great representation.”

The WWD cover after the 1990 Oscars trumpeted: “The Agony and the Ecstasy,” with a giant “X” drawn through Basinger’s getup on the left and a sleek Michele Pfieffer in a navy Armani column on the right. The Italian designer Giorgio Armani was making inroads with the celebrity crowd as a new decorum took hold (the paper even called it approvingly, “The Armani Awards”). Yet, as Brad Goreski, stylist and co-host of E!’s Fashion Police, says of the red carpet today: “I wish it would be more like a Kim Basinger so we could really go at it or have an opportunity to explain why it might be iconic. The fact that we are having this conversation still about Kim Basinger [shows] that those gowns are probably more talked about and remembered than most of the best-dressed.”