The end of Live PD on A&E was as fast as it was stunning. Within days of the show being temporarily pulled June 6 in the wake of nationwide protests against police violence, one of the top-rated series on cable was gone for good June 10 when both A&E and producer Big Fish Entertainment decided to shut it down.

“It was like the perfect storm,” a source close to the show tells The Hollywood Reporter of the circumstances leading to Live PD‘s end, as major entertainment companies aimed to align themselves with the Black Lives Matter movement amid protestors’ calls to defund police departments.

Sources say that in between pulling episodes of Live PD and the outright cancellation of the series, A&E and Big Fish had several conversations about the future of the show. Executives decided that for a variety of reasons, ranging from the current political moment to keeping crewmembers safe in the field amid clashes between police and protesters, Live PD couldn’t go forward. (Big Fish produces other shows for A&E, including the Live PD spinoff Live Rescue and K9 competition show America’s Top Dog.)

The swiftness of the Live PD decision may have been surprising, considering A&E had made the show a centerpiece of its identity as a network. At the time of cancellation, Live PD had aired 298 episodes and A&E had picked up a whopping 160 additional installments — totaling 480 hours — just a month before shutting it down.

Excluding news and sports, Live PD, hosted by Dan Abrams, was the No. 1 show on cable on Friday and Saturday nights in total viewers, averaging almost 1.9 million viewers in 2020, and in A&E’s key demo of adults 25-to-54. The two weekend installments occupied more than a quarter of the network’s primetime hours each week, and reruns and repackaged shows like Live PD: Police Patrol filled countless hours in other dayparts.

Big Fish, headed by Live PD creator Dan Cesareo, has come under scrutiny because of its connection to the Ambler case. Sheriff’s deputies from Texas’ Williamson County pursued Ambler, a Black man, over a traffic violation in March 2019 and used tasers on him multiple times after stopping him in neighboring Austin.

A Live PD camera crew was embedded with the deputies, capturing footage for the show, though it wasn’t transmitting live. Police camera footage from the incident shows Ambler pleading with deputies, saying that he had congestive heart failure. Live PD never ran the footage it shot that night as A&E had a policy against showing any fatalities on the show, whether or not they involved officers.

While controversy over the handling of the Ambler case footage might have led to Big Fish losing its business with ViacomCBS, the history of Cops and ViacomCBS is less complicated than that of A&E and Live PD. Cops was a holdover on Paramount Network, having begun in the Spike TV channel era, and while it drew a steady audience, it was nowhere near the breakout hit that Live PD was: In 2020, 16 episodes of Cops averaged about 450,000 viewers, less than a quarter of the audience for Live PD.

ViacomCBS sources also say that Paramount Network plans to gradually transition away from unscripted programming, though it still has such shows as the Ink Master franchise and Bar Rescue on the air.

The network changes arrive as many Americans now say TV shows’ depiction of law enforcement is ripe for change. According to a nationally representative THR/Morning Consult poll of 2,200 adults conducted from June 11 to June 13, a majority of respondents in the survey (56 percent) say series about cops should “more accurately reflect policing in the United States.”

When asked in the survey about perceptions of reality TV police shows, 52 percent of respondents thought Cops portrayed police “very” or “somewhat accurately”; only 41 percent said the same of Live PD. After Cops, the show that U.S. adults in the survey thought portrayed police accurately was NBC’s long-running Law & Order: SVU, which has aired for 21 seasons. Just under half, 49 percent, thought it showed police work accurately. The most watched show mentioned in the poll, CBS’ Blue Bloods (12 million viewers per episode), also scored fairly high, with 38 percent saying they thought it was “very” or “somewhat accurate.”

Live PD was born out of calls for transparency in policing after the 2014 killing of Michael Brown by a police officer in Ferguson, Missouri, and the growth of dashboard and body camera use in law enforcement. A source close to the show hopes there’s room for reform in the genre. “Could it come back in six months or a year in a way that shows unity between the community and policing?” this person asks. “I think so.”

Advocacy groups, meanwhile, are applauding A+E’s decision. “These reality crime shows really act as a PR arm of police departments,” says Arisha Hatch, vp and chief of campaigns at Color of Change, which lobbies for more accurate portrayals of criminal justice in media. “It’s been a multiyear conversation, and it’s nice to see in this moment progress made, though there’s still a lot of work to do.” 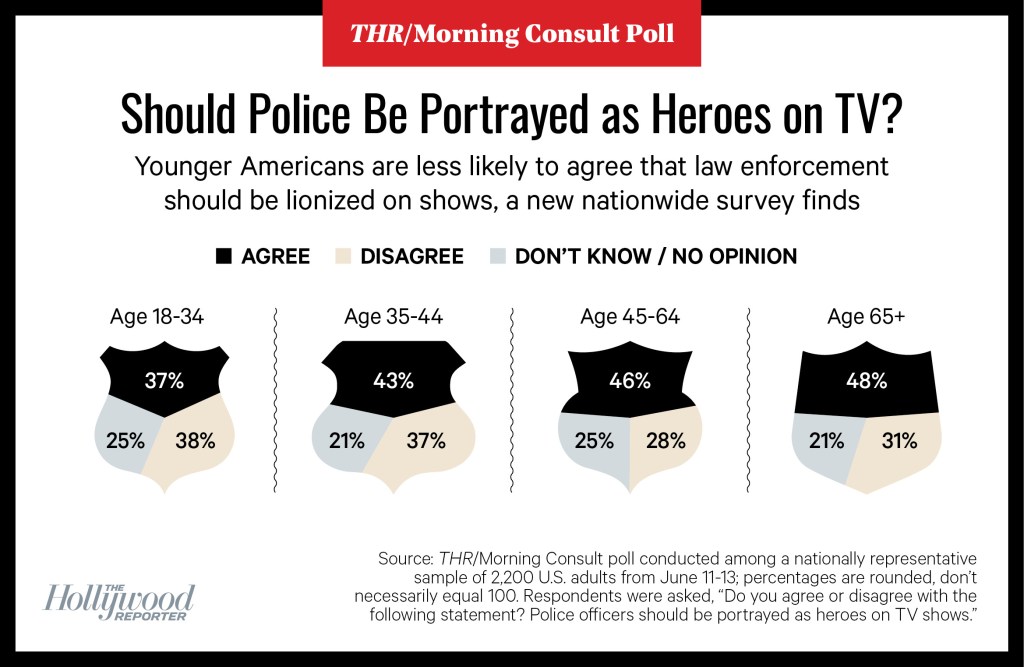 'TV's Top 5': A Conversation About Police and Hollywood With the 'Law & Order: SVU' Showrunner