The week of Aug. 3 may go down as the time when shit got really real in Hollywood. Changes underway in the industry were accelerated by a global pandemic, and suddenly giants were paralyzed yet trying to take advantage of the times — rushing to transform organizational structures and slash jobs while hurtling toward an uncertain future.

“It’s the great reckoning now,” says Kevin Reilly, who was swept out in the WarnerMedia reorganization that rocked the industry Aug. 7. (Reilly’s unwieldy title — which said a lot about this moment — was chief content officer of HBO Max and president of TNT, TBS and truTV.) “This has been a decade-plus of the legacy system bound to quarterly profits generated by the same paradigms. We’ve only recently begun pivoting meaningfully into the new era. Now with the pandemic as an accelerant, there will not be one corner or sector that will sit with their feet up thinking, ‘I’m good!’ ”

Disney, NBCUniversal and WarnerMedia have a big stake in protecting theatrical windows, licensing fees and syndication deals that still throw off billions in revenue, while Netflix has become a behemoth that doesn’t have to concern itself with those conventions. In the TV business, Reilly says, “We’re still sitting with a Nielsen rating measuring L3 [live plus three days of delayed viewing] and they’re putting up whole shows without commercials and nobody is measuring it. How do we compete with that? All individual businesses don’t make sense anymore in their individual lanes. They all need to be aligned.” 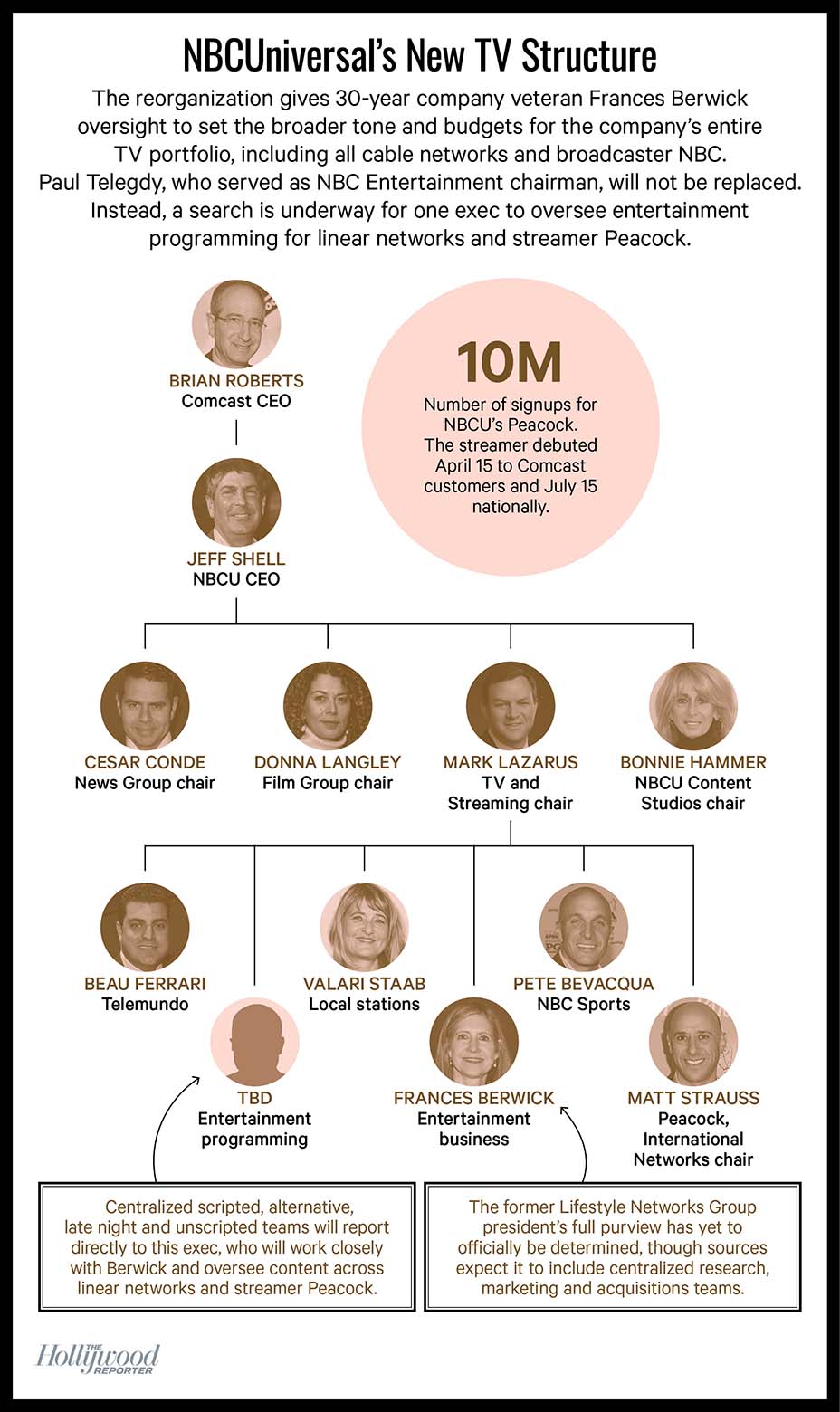 But the realignment means that the legacy companies are forced to throw massive amounts of money at generating new “product” just as the pandemic has shut almost everything down and revenue is plummeting. So the challenge is simple: Make a lot more programming with less money coming in and a fraction of the staff. And be sure to keep an eye on the old-school businesses that have been keeping your bread well buttered all these years. Says an executive in the thick of trying to manage it: “Things are going to be very bumpy and ugly for a while.”

LightShed Partners analyst Rich Greenfield says companies have no choice: “You either harvest cash exclusively from the legacy businesses until you die or you try to pivot to the future,” he says. And, by the way, that future “will not be as profitable as the past.”

The dramatic first week of August began when NBCUniversal unveiled a reorganization that was sweeping, if lacking in some key details. Frances Berwick, who ran Oxygen, Bravo and E!, was put in charge of NBCU’s entertainment business unit, but the scope of that job and Berwick’s new title remain unclear. The company whisked out NBC Entertainment chairman Paul Telegdy, and outside counsel was engaged to investigate toxic-workplace allegations reported by The Hollywood Reporter. At the same time, Mark Lazarus, the chairman of television and streaming, has also pledged a “broader cultural assessment.”

That on its own might be unsettling to some (but very encouraging to others). Meanwhile, a big piece of the NBCU puzzle is missing: Lazarus has not yet named a head of entertainment programming, a major job that encompasses the NBC broadcast network, cable networks and Peacock streaming service. The idea is to create a centralized development team that will decide what content goes where, opening up the question of how much power creatives will have to determine the fate of their projects. Adding to the overall uncertainty: The top entertainment job is parallel to Berwick’s, with both execs reporting to Lazarus. How the team at the top will mesh is, of course, impossible to predict. And what changes to the team will the new entertainment chief make? 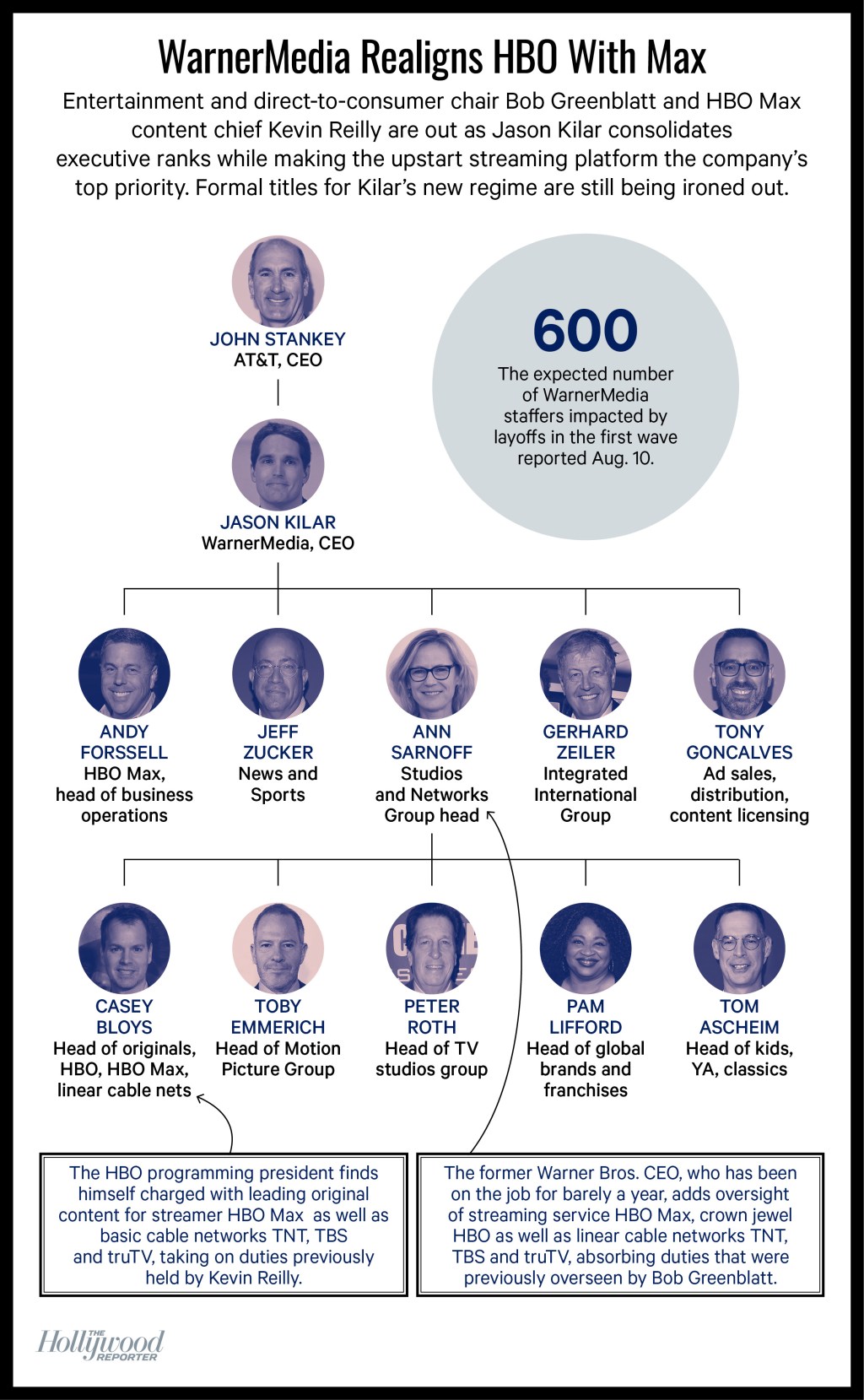 And WarnerMedia delivered perhaps the most jolting development so far in symbolic terms: the surprise ouster of Bob Greenblatt as chairman of WarnerMedia Entertainment and direct-to-consumer. Greenblatt had been on the job only since March 2019. But newly installed WarnerMedia CEO Jason Kilar was ready to undertake big changes, some of which undid the choices that had been made by his boss, AT&T CEO John Stankey, when Stankey was running WarnerMedia. Layoffs of hundreds of staffers ensued.

When he was founding CEO of Hulu from 2007 to 2013, Kilar was focused on building a straight-to-consumer machine while his masters — the studios that owned the joint venture — weren’t so sure just how straight-to-consumer they wanted to go. Hulu didn’t dip its toe into originals until Kilar was toward the end of his tenure, so his relationships with the creative community were not much of an issue. After that, Kilar founded the shortform video service Vessel until Verizon acquired and shuttered it in 2016; subsequently he served on the Univision board.

Now Kilar runs a massive media organization that includes everything from CNN to HBO to the Warners film and TV studio to fading cable channels that can’t be ignored because they still generate $3.5 billion in EBITDA annually. The chain of command in parts of the WarnerMedia empire wasn’t exactly clear, so some change might be helpful. But what kind of change? One showrunner worries about the potential of “being run by a tech company” without anyone who knows how to talk to creatives. Greenfield finds comfort in Kilar’s decision to promote HBO programming president Casey Bloys to a far bigger job overseeing programming.

As WarnerMedia, NBCU and Disney pivot to streaming, one high-level exec concedes the big issue: There is no proof the concept will work long-term. In competing with Netflix, he says, “We’re all chasing a company that doesn’t make a lot of money.” Another film exec adds: “Do we go boldly off the hill chasing after everyone else, or do we wait to hear the splat?”

But whatever painful changes await, a veteran agent is confident that one thing will remain the same. “Studios, agents, producers, we’re looking at a very different world,” he says. “But content is always king. And as they say, ‘I’ve dealt with your predecessor, I’ll deal with your successor.'”

A version of this story first appeared in the Aug. 12 issue of The Hollywood Reporter magazine. Click here to subscribe.