The commendable spirit behind Harvey Fierstein’s big smoochy valentine to the famously feisty lawyer, congresswoman, feminist godmother and hat queen, Bella Abzug, goes a long way toward shifting attention away from the material’s shortcomings. But the enormous good will for both the writer-performer and his subject can’t disguise the fact that Bella Bella isn’t quite a play — at least not one that acquires three-dimensional theatrical life. Still, there are compensations aplenty in sharing the politician’s triumphs and frustrations as distilled by Fierstein, an eternally captivating storyteller who sprinkles the fond salute with Yiddishisms, zingers and amusing aphorisms.

The solo show also serves quite transparently as a timely reminder of the wisdom of putting women in government. As such it could be interpreted both as a late show of solidarity for Hillary Clinton and a hearty endorsement for Elizabeth Warren, although both those women are very distant in style and substance from the legendary New York liberal, whose unique brand of moxie was evident in her first campaign slogan: “A woman’s place is in the House — the House of Representatives.”

In a regressive age when “likability” so often gets dragged up as a cautionary note while assessing female candidates, it’s refreshing to be reminded of a trailblazer who, in response to skepticism about her voter appeal, says, “Fuck you. I’m lovable.”

The characteristic wit and warmth of the writing and the brisk efficiency of director Kimberly Senior’s production, which runs a tight 82 minutes, make the play entertaining enough, but what’s mildly perplexing is the coyness of Fierstein’s physical interpretation of Abzug. This is one of America’s most beloved drag performers, after all, having slipped into heels and a girdle to great acclaim in Torch Song Trilogy, La Cage aux Folles and Hairspray. In this age of heightened sensitivity around gender representation, it’s understandable that there might have been some concern about seeming disrespectful, particularly when the character in question was so revered for her pioneering battles against the sexist political hegemony. But Fierstein’s text is such an unabashed love letter and his portrayal so mushy he could never be accused of mockery.

The actor gives us Abzug in the generic male drag of a black shirt and pants, without makeup or wig. His sole nod to channeling a woman is the black toenail polish on his bare feet, and the wide-brimmed red hat that’s more a prop than a costume. There’s no theatrical illusion here, so it’s as much Harvey Harvey as Bella Bella. If you’re fine with that, chances are you’ll have an enjoyable time, and you’ll learn a lot about a fascinating, quintessentially New York figure. But there’s also a nagging sense of missed opportunity for something more dramaturgically robust.

The play is set on the night of the 1976 Democratic primary, when Abzug made her bid to become New York State’s first female Senator; it unfolds entirely in the bathroom of a modest guest suite at the Summit Hotel on Manhattan’s East Side. (Designer John Lee Beatty’s set is a perfect facsimile of sterile period decor invaded by the occupant’s personal clutter and campaign material.) It’s the early hours of the morning, and Bella is hiding out to keep her nerves in check as the vote count trickles in. Beyond the bathroom door, unseen, are her husband Martin, their daughters, her press secretary, speechwriter and various supporters, including New York Lt. Gov. Mary Anne Krupsack, Shirley MacLaine, Lily Tomlin and Gloria Steinem.

Fierstein structures the piece as a direct-address monologue, with Bella taking us into her confidence as she tries to ignore the mounting evidence that she will lose by the narrowest of margins to Daniel Patrick Moynihan. (In one of the more interesting nuggets, she blames that defeat on The New York Times, after its publisher overruled the editorial board and endorsed Moynihan.) “I have never entered a race I didn’t win. Eventually,” she says early on, before needling uncertainty starts to rattle her confidence.

In the meantime, she shares memories and anecdotes stretching back to her childhood, and her first run for office as third grade class president. A teacher that didn’t like her attitude scratched her name from the ballot and she became twice as popular, winning in a landslide of write-in votes. The origin of her signature accessories is traced to necessity, after she studied law at Columbia and joined a firm, only to be mistaken for a secretary every time she turned up to meet a client. (“No one tells a woman wearing a hat and gloves to fetch them a cup of coffee.”) She recalls past progressive fights in which she played a significant role — gay rights, abortion, nuclear arms protests, Vietnam, even the basic right for women to use the Congressional swimming pool and sit on the main floor instead of being exiled to the balconies.

With his basso growl and mischievously conspiratorial manner, Fierstein is very funny and often quite touching as Bella dishes on everything from her fluctuating weight to her refusal to be marginalized in the rituals of Judaism because of her gender. Her contemporaries often get a roasting, slyly at times, when they’re ostensibly on the same side, like Betty Friedan, or more scornfully with the likes of Harry Truman, Hubert Humphrey, Richard Nixon (Abzug was the first to call for his impeachment) and Gerald Ford.

Fierstein frequently brings a light touch where you least expect it, for instance in Abzug’s legal representation of women dragged before the House Committee on UnAmerican Activities: “Boy, what fun we had with that wacky Joe McCarthy.” Elsewhere, the material is deeply sorrowful. She recounts her long ordeal in the 1940s defending Willie McGee, a black Mississippian who had been having a consensual affair with a married white woman, until the relationship was discovered and he was put on trial for rape, at that time a capital offense. Recollections of a KKK demonstration at a Paul Robeson concert in Mount Vernon summon a similar chill.

There’s some occasional pandering to contemporary audiences, notably in a winking aside about Truman: “Can you imagine a president demanding a loyalty oath from the very people he was elected to serve?” Likewise, Bella’s account of a dream in which a female president stood on Capitol Hill to deliver the State of the Union address, acknowledging the women of her cabinet and the nine female Supreme Court Justices.

But there’s no doubting the sincerity of Fierstein’s intentions or the profound kinship he feels with his subject as a fellow activist. “Look, I know I’m a pain in the ass, but the rules of the patriarchy were not invented to include us,” Bella says. “They were, in fact, designed to exclude us. If we wanted to be heard, we had to be loud.”

From the vast majority of male writers, the impassioned advocacy for women in government here might seem patronizing. But Fierstein is clearly preaching views in which he strongly believes, enlisting “Battling Bella” as his mouthpiece.

“Women are simply more fluid,” she says. “We adjust. We consider not only the goal ahead but the reality of the ground below our feet. We’re not wedded to the policies of the past because, frankly, we had nothing to do with creating them. We see things men don’t seem to even notice because we aren’t wasting time defending our masculinity.” 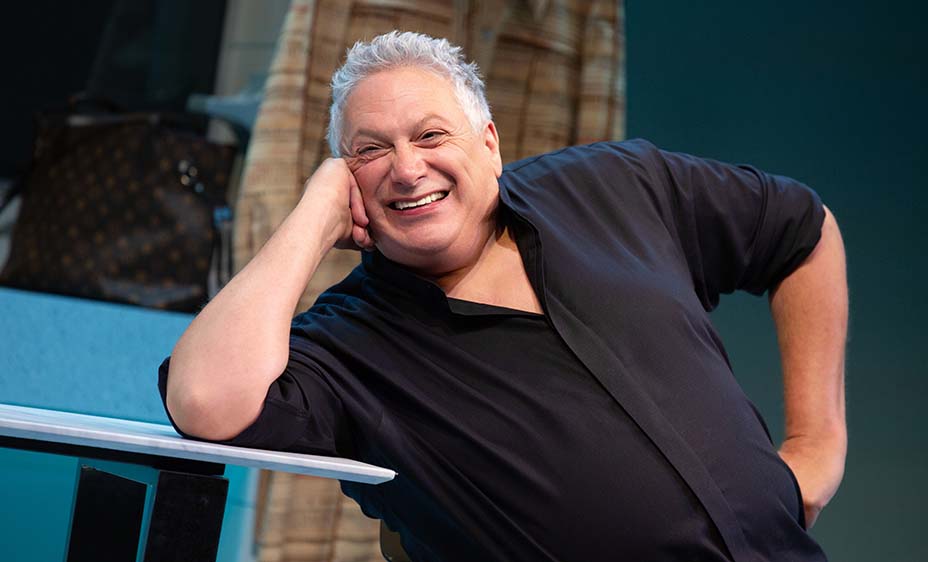