Few performers today have the quicksilver command and agile wit of Janet McTeer, so casting her as Sarah Bernhardt, the famed French thespian of the late 19th and early 20th centuries, was inspired. Even more so once the focus tightens onto “The Divine Sarah” as she chafes against the limited avenues open to women in the theater, ignoring naysayers in her determination to tackle one of the greatest male roles in the dramatic canon, Shakespeare’s Hamlet. But despite many tantalizing elements and historical material ripe for exploration from a contemporary feminist perspective, Theresa Rebeck’s Bernhardt/Hamlet doesn’t add up to a play. At least not a satisfying one.

Any work dealing with the disruptive force of a self-assured woman of ambition and power in a patriarchal world has an automatically heightened currency today, and the prolific Rebeck operates knowingly within that spectrum. Certain lines seem hardwired to prompt cheers of approval from a woke audience, such as Sarah’s indignation about the narrow range of parts available to women in her profession.

“I will not go back to playing flowers for you fools,” she roars at her married lover, the playwright Edmond Rostand (Jason Butler Harner). “Not because I am too old. But because I was never a flower, and no matter how much you loved how beautifully I might play the ingenue, it was always beneath me. It is beneath all women.” It’s a feisty dismissal, but it comes rather late in a scattershot play in which both the author and her vessel have struggled to define what really drives the character. Mostly it comes off as egomania, which is amusing but seldom emotionally involving. 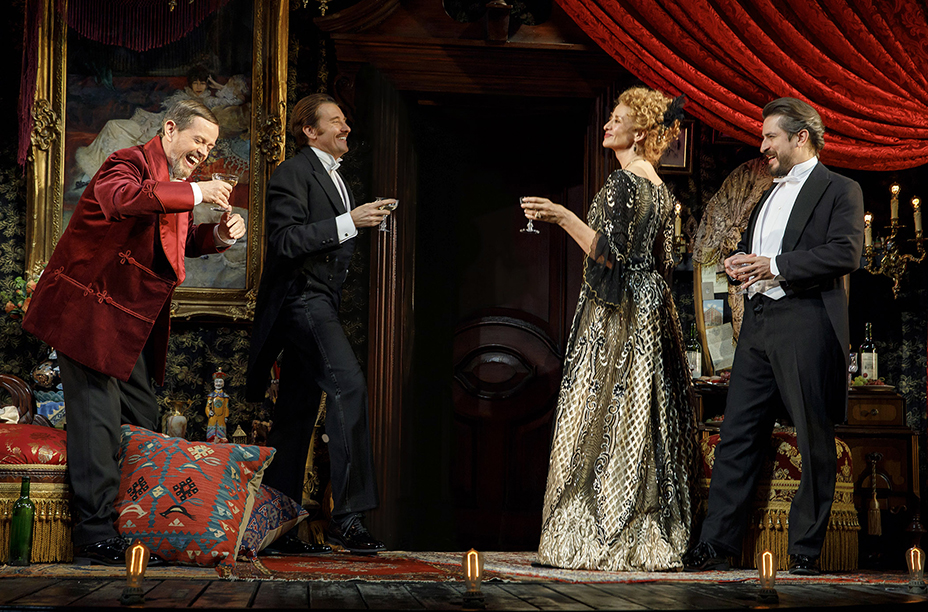 Part of the problem is that any account of this fascinating footnote in theatrical history arguably has to start with Bernhardt’s consuming desire to do that particular role in that particular play. But director Moritz von Stuelpnagel is a comedy specialist, as demonstrated in Hand to God and Present Laughter, so presumably it’s no accident that from the very first scene, McTeer’s Sarah treats the Shakespeare text with an irreverence bordering on mockery, all of it played strictly for high comedy.

That would be fine if it went somewhere. But Rebeck builds scant dramatic interest or momentum, despite Sarah dismissing any opposition to the project (of which there’s not much) and fighting to overcome her internal doubts while pummeling the role of Hamlet into a morsel she considers worth swallowing. The playwright seems more intent on milking laughs from depicting one great artist (Bernhardt) measuring herself against another (Shakespeare), deeming the latter inferior.

Sarah rolls her eyes at the Bard’s wordiness, bemoaning his excess verbiage to describe a relatively simple thought; and scoffs at the accepted view that the Danish prince is 30 and miserable, instead insisting on playing him as a beardless youth of 19, alive with a passion and joy only she can untap. “No one is going to come to the theater to see me play a depressed melancholic boy,” she says, shutting down the objections of Rostand, which invariably are outweighed by his infatuation. That leads to his reluctant acceptance of the assignment to rewrite Shakespeare to Sarah’s specifications, pruning away the poetry that doesn’t speak to her as a woman. Out go those pesky iambs.

McTeer has a grand old time with all this, prancing about in a performance of flamboyant physicality, rapier-like responses and intoxicated self-regard. She may be a foot taller than the petite Bernhardt, but she captures the spirit of a creature born for the stage, who would be the first to call herself “legendary.” Her Sarah is not so much susceptible to flattery as ready at all times to endorse and expand on it.

Off Script: Janet McTeer Steps Back Into Trousers for Her Return to Broadway

But for too much of the play, Rebeck seems more tickled by Bernhardt’s gift for riding roughshod over all obstacles — steamrolling any conflict in the play along with them — than by what her quest might actually represent in terms of her frustrations and her desire to break with the conventions of the era. Sure, her cause is backed by nods to the tradition of Shakespeare’s women being played by men, but the crucial case for Bernhardt wanting to conquer this material is never made with much eloquence.

“A woman who cannot do anything is nothing,” she says in a moment of peak exasperation with the role. “A man who does nothing is Hamlet.” This kind of Shakespeare takedown gets laughs for sure, but it reinforces the sense that Rebeck has written a play less about a pioneering woman determined to thrust her stage-prop sword through the glass ceiling than one infuriated by a part that, in today’s terms, is the epitome of ineffectual white male privilege. Sarah is unable to connect with Hamlet’s tragedy, which is treated as the play-within-the-play’s failing, not the performer’s. It’s not the first time Hamlet has been thus dissected, and it’s funny-ish. But it hardly helps get an audience on board with the protagonist’s single-minded purpose.

The scene in which Bernhardt/Hamlet hints at a richer dimension is a small breakthrough in rehearsals when Sarah runs through the “Murder most foul” exchange with the ghost of Hamlet’s father. That role is played by the trusty Dylan Baker as Constant Coquelin, another celebrated actor of the time whose grand late-19th-century manner is ridiculed by Sarah and other fawning members of her company. It’s the one instance in which Rebeck deftly uses contemporary psychology to mine authentic emotion in the text, and the sole point at which Bernhardt becomes one with Hamlet, briefly fulfilling the promise of this play’s title.

In addition to McTeer and Baker, there’s fine work in the solid ensemble from Harner as Sarah’s helpless slave; from Ito Aghayere as Rostand’s astute wife Rosamond, whose single confrontation with her rival takes an unexpected turn; Nick Westrate as Sarah’s scolding but ultimately adoring son; and from a droll Matthew Saldivar as art nouveau illustrator Alphonse Mucha, toiling over posters for Bernhardt productions while fretting about being remembered only for his biscuit tins. 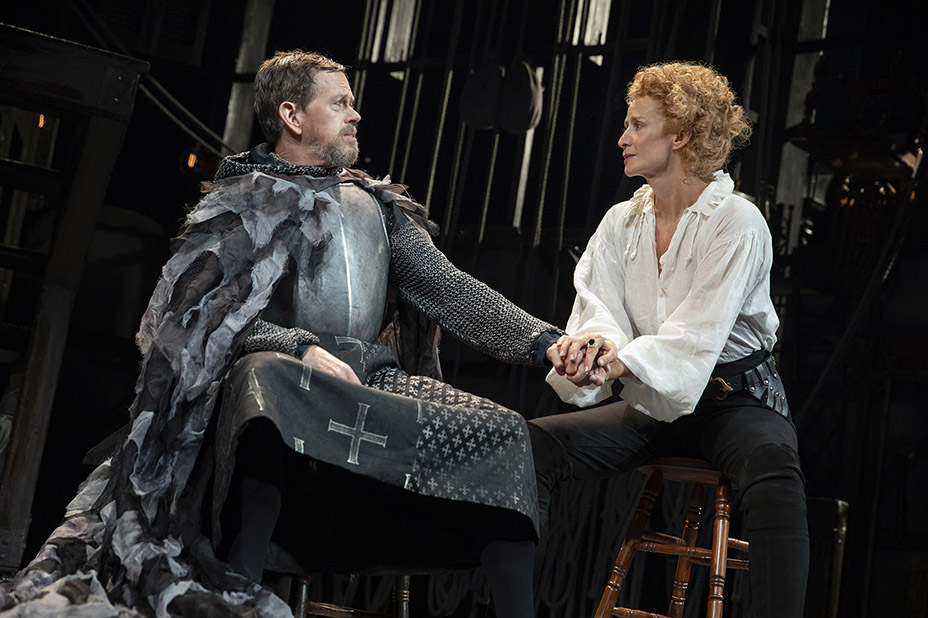 Rebeck is definitely stronger on dialogue than structure, but director von Stuelpnagel does what he can to keep the play moving on Beowulf Boritt’s gorgeous revolving set. It spins from the rehearsal space to Sarah’s dazzlingly cluttered dressing room, dominated by a sensual portrait of her, to various locales around Paris, framed by an ornate period proscenium and always with the ropes and pulleys of the backstage world in view.

However, the play in most respects is a missed opportunity, despite the pleasure of watching the willowy, silver-tongued McTeer careen from high camp into righteous hauteur. What’s most maddening about this misconceived project is the playwright’s abrupt loss of interest in Sarah’s chief motivation. Indeed, we learn more from Bernhardt’s Wikipedia page about her eventual performances in Paris and London in a prose adaptation of Hamlet than we do from this play.

Instead, there’s a late detour into Rostand’s Cyrano de Bergerac. This prompts fresh outrage from Sarah that he has drawn inspiration from her to create Roxanne, that play’s female lead — a beautiful, passive moron, besotted with an idiot and too dim to see the worthy admirer right in front of her. Rebeck’s discursive wrap-up might be intended to hammer home her clumsily developed thesis about the marginalization of women, both as characters and performers, but it only adds to the muddled nature of a play that lacks a cogent sense of purpose.