On May 22, Bernie Taupin — the best-selling lyricist whose storied collaboration with Elton John is depicted in Rocketman — celebrated his 69th birthday. The music legend (since the 1970s) and visual artist (since the 1990s) was in Washington for a special screening of the new biopic when he met with House Minority Leader Kevin McCarthy, the Republican from Bakersfield, California. “He wanted to see my artwork and loved it,” says Taupin. “He had 10 American flags fly over the Capitol in my honor and is presenting them to me to be used in my artwork.” (McCarthy’s office had no comment.)

The flags in Taupin’s artworks come from many sources. Most are donated by collectors who prize his bold, multimedia 3D assemblages. “I get a lot of flags that have flown over businesses, flown over people’s houses, that belonged to collectors’ relatives or parents. They want to see them put into my work,” says Taupin.

Taron Egerton Tests Positive for COVID-19, Will Isolate For a Week Before Returning to West End Show

From June 7 to 30, art lovers can see how the British-born Taupin (who became a U.S. citizen in 1990) uses the flag in his biggest-ever exhibit. “Bernie Taupin: The Artist, The Raconteur and His Blowtorch” launches with at least 26 assemblage and sculpture pieces at the 12,000-square-foot Galerie Michael at 2 Rodeo in Beverly Hills with an invitation-only June 6 reception.

Some of the flags are covered in found objects like barbed wire or rough twine, and, yes, some are blowtorched. “The flag is the signature motif because it’s such a durable, iconic symbol that can be jerry-rigged to represent so many aspects of cultural significance,” says Taupin by phone from his home in the Santa Ynez Valley north of Santa Barbara. To people who say that the artist behind “Candle in the Wind” and 29 other top 40 U.S. hits is disrespecting the flag, Taupin responds: “I find it ironic — the correct way to dispose of a flag is actually to burn it. I am resurrecting them after they’ve served their purpose.” One piece even has on it the official exact wording of how to properly dispose of a flag by burning it. 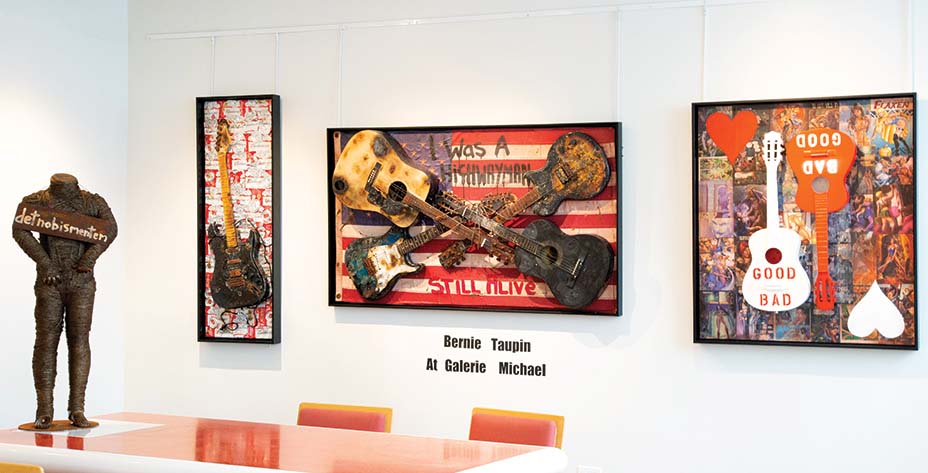 Some flags have destroyed guitars attached. For Taupin, the pairing pays homage to American roots music, which he listens to when working in his studio, currently an old paint warehouse while he builds one in the residence near Solvang he moved into after selling his 30-acre estate, Roundup Valley Ranch. “The guitars represent blues, hill-country music and gospel that I feel over the years may be forgotten,” says Taupin, whose playlist includes Jimmy Martin, Lightnin’ Hopkins, Fred McDowell and Blind Lemon Jefferson. “The guitars are all brand-new instruments that I smash and burn and deconstruct and put back together in my artwork. I want the pieces to give the impression that they are being dug out of the ground, like archaeology, and given a new life,” he says.

Taupin grew up in the rural and economically bleak north of England in the 1950s and early 1960s and recalls getting to know American music through “American servicemen who settled into airbases in England after the war,” he recalls. “They brought a lot of their music with them that wasn’t available in England, whether it was Chicago blues or Bakersfield country. We lived on a diet of American culture.” In 1967, he met John after each separately answered an ad placed by a record company looking for new songwriters. The two went on to co-write such hits as “Bennie and the Jets,” “Daniel,” “Don’t Let the Sun Go Down on Me” and “Tiny Dancer,” and sell 255 million records worldwide. More than 50 years after they first met, the two were in Cannes together on May 16 for the world premiere of Rocketman.

While Taupin was “thrilled” with the film’s reception — John also was there, and the two wrote “(I’m Gonna) Love Me Again” for the closing credits — songwriting is not his primary pursuit these days. “My day job is being an artist,” says Taupin, though he admits he and John “intend to continue recording.” Adds art historian Michael Schwartz, the founder and president of Galerie Michael, known for its sales of works by Picasso, Chagall and Rembrandt: “Bernie will work 16 hours a day in his studio. As a lyricist, he’s been able to make people cry, to make people respond emotionally, and he brings this same gift into his art. His pieces exude mystery, ambiguity and contradiction.”

That applies especially to his use of the American flag. For him, the flag serves as a way to reflect on history, on loss, on patriotism and on the state of the country. “I think there are times the flag gets bogged down and politicized and used as a tool when it’s really an emblem for everyone. Obviously, there have been certain points in history when division of the nation sort of tamps down the flag a bit and it’s waved for the wrong reasons. But I always feel that when the right time comes, it arises with that purpose that it was created for in the first place. I’m not talking about this administration right now, but to a certain extent I am. But it’s not just now. You can talk about the Civil War or 9/11, which is a perfect example. That’s when it came back with a vengeance. It united people, especially as a flag was found in the ruins of the Twin Towers. It’s why it’s such an iconic symbol. I just don’t want to see it used as a tool to divide people.”

A version of this story first appeared in the June 5 issue of The Hollywood Reporter magazine. To receive the magazine, click here to subscribe.