Jewels enjoyed more than a few brilliant moments at the 92nd Academy Awards on Sunday, with statement necklaces and earrings leading the night’s trends in gems.

Important stones and high jewelry (the designation for one-of-a-kind pieces) were prominently seen throughout the night. From Sigourney Weaver’s Kwiat platinum-set earrings, which featured two pear-shaped diamonds totaling 12 carats each, to the flurry of Maria Tash diamond earrings and rings that Cynthia Erivo wore with her Atelier Versace gown, the sparkle was out in force. Here’s a look at a dozen of the night’s most dazzling looks.

Why wear one high-jewelry necklace when you can wear two? Gwyneth Paltrow set the tone this awards season for layering high-jewelry pieces when she wore a pair of Bulgari high-jewelry diamond necklaces to the Golden Globes.

Joker co-star Zazie Beetz followed suit on Sunday night, wearing a pair of Bulgari high-jewelry necklaces: the high-jewelry Diva’s Dream necklace of more than 78 carats of diamonds set in 18-karat white gold, topped by a high-jewelry choker of emeralds and diamonds totaling more than 19 carats, including a 5.49-carat, oval-cut emerald at its center. It looked like one piece, which made the pairing all the more artful. 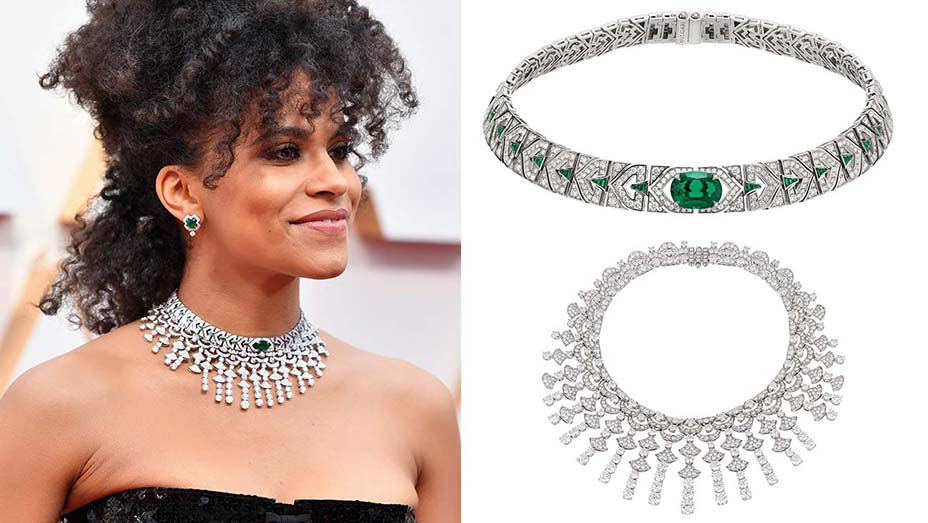 With her peach-toned, crystal-embellished Atelier Versace gown, Regina King kept her jewels to a minimum, with the exception of one standout piece: Harry Winston’s Draperie Diamond bracelet, highlighting 46.93 carats of diamonds, set in platinum. 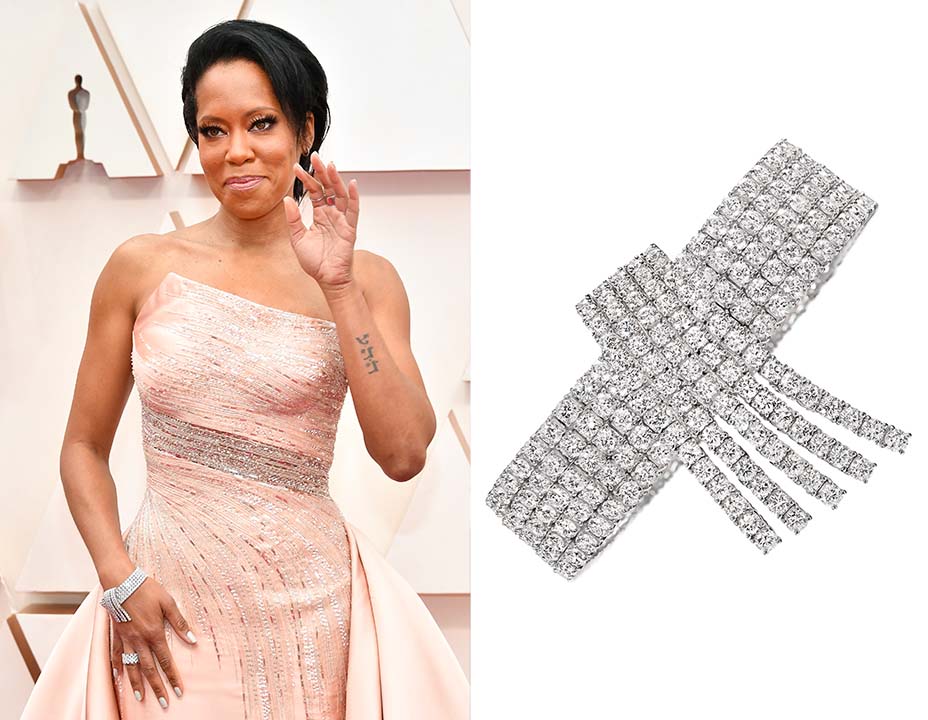 The Oscar nominee for Bombshell wore a black silk Dior Haute Couture gown, and its sculpted neckline proved to be ideal framing for her high-jewelry necklace by Tiffany & Co. The piece, from the jewelry house’s Fall 2020 high-jewelry collection, showcased a marquise-cut diamond totaling 21 carats, and was framed by an additional five carats of diamonds and set in platinum. Totaling 165 stones, the necklace is valued at more than $5 million. 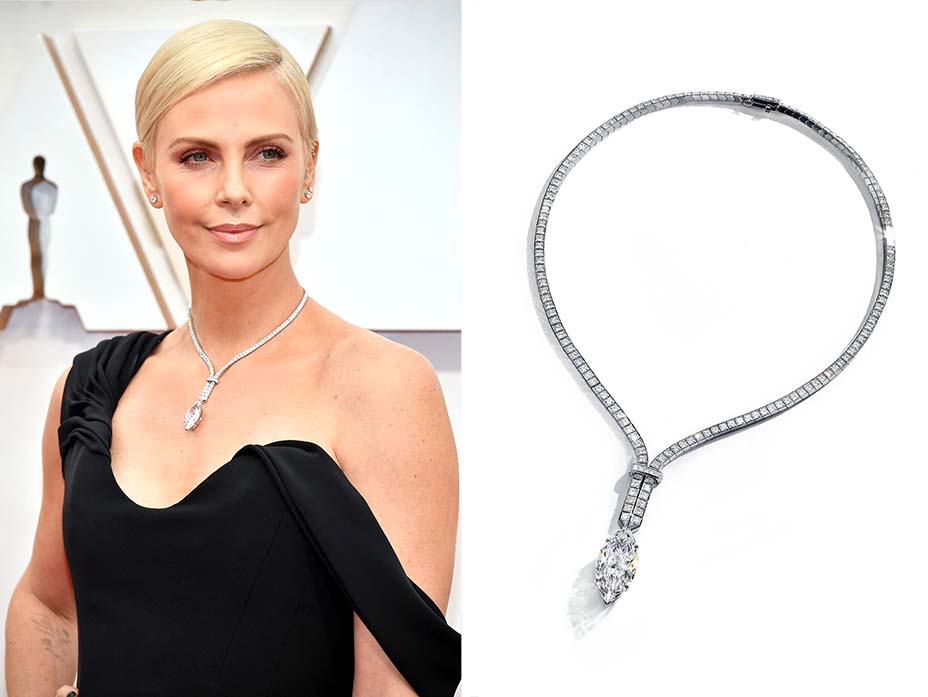 Before she appeared onstage to kick off the show, Janelle Monae caused a frenzy on social media with her red carpet look, designed by Ralph Lauren. Monae’s crystal-lacquered gown offered plenty of sparkle, and under that elegant hood, there was one more element of shine: Forevermark’s Lace of Light diamond choker, featuring 26.54 carats of diamonds set in 18-karat white gold. 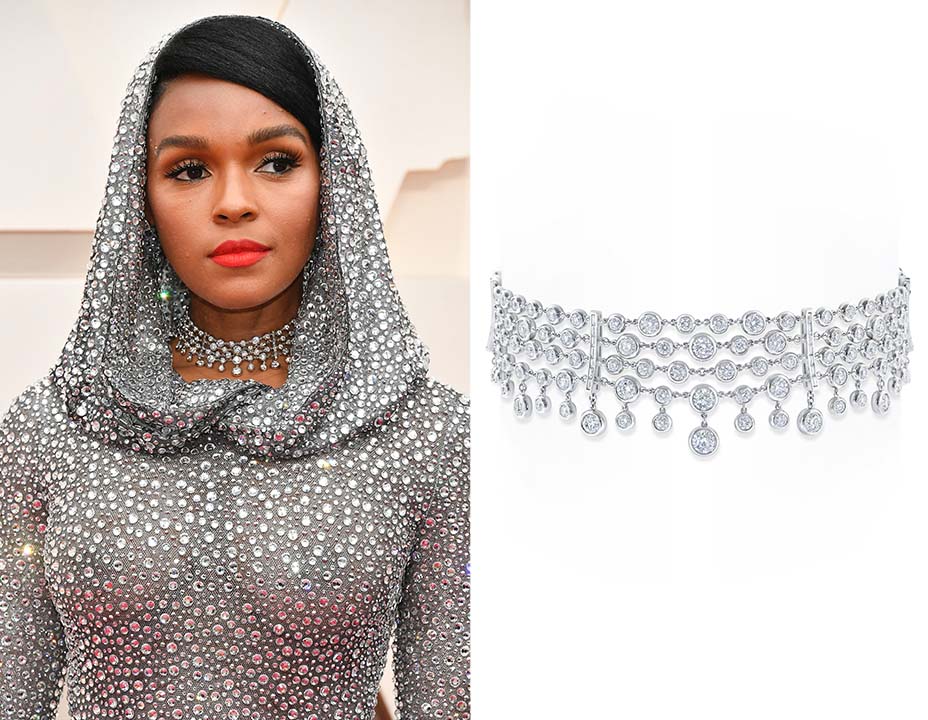 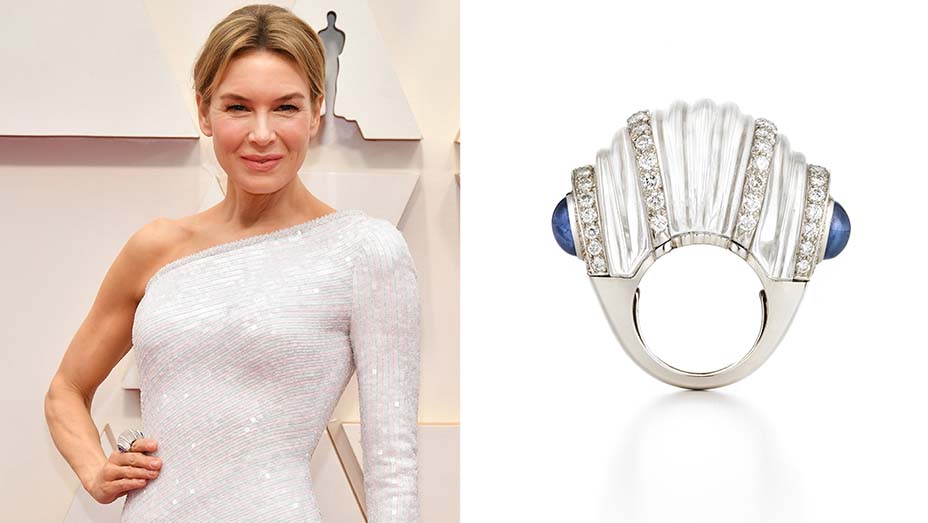 The actress and producer channeled the look of a Greek goddess on Sunday night in a custom white silk-georgette one-shoulder gown by Gucci. Hayek Pinault took the look a step further by reaching out to Boucheron for the jewels to match, including a headpiece of pearls and 18-karat white gold, meant to resemble an olive-branch crown, with earrings, too. 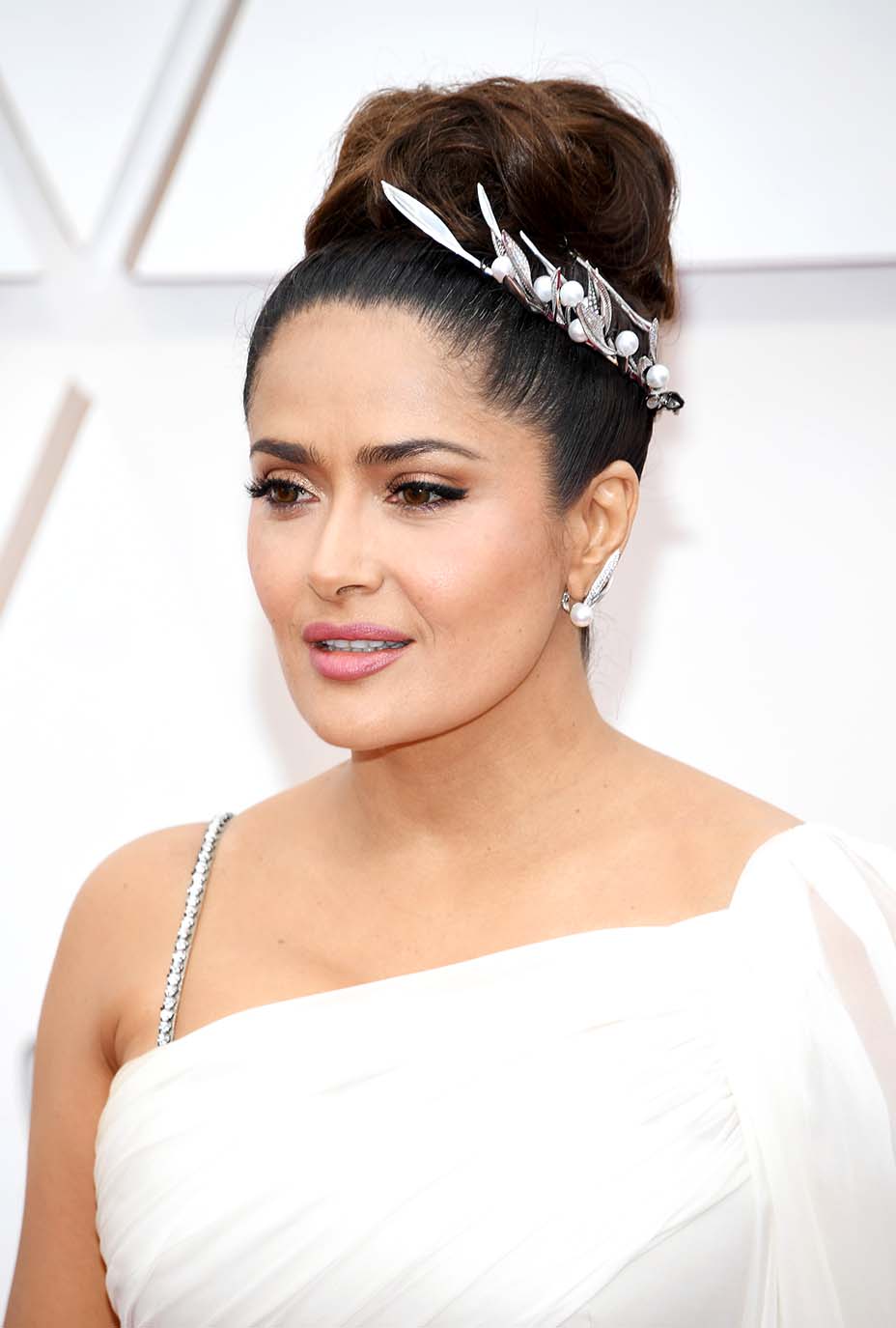 The Little Women best actress nominee also worked with Gucci on a custom head-to-toe look. Her jewels likewise came from the Italian label, including her high-jewelry chandelier earrings crafted of diamonds and spinels, set in 18-karat white gold. The whimsical jewel in her hair, meanwhile, was a high-jewelry brooch also by Gucci, crafted of tsavorite and diamonds set in white gold. 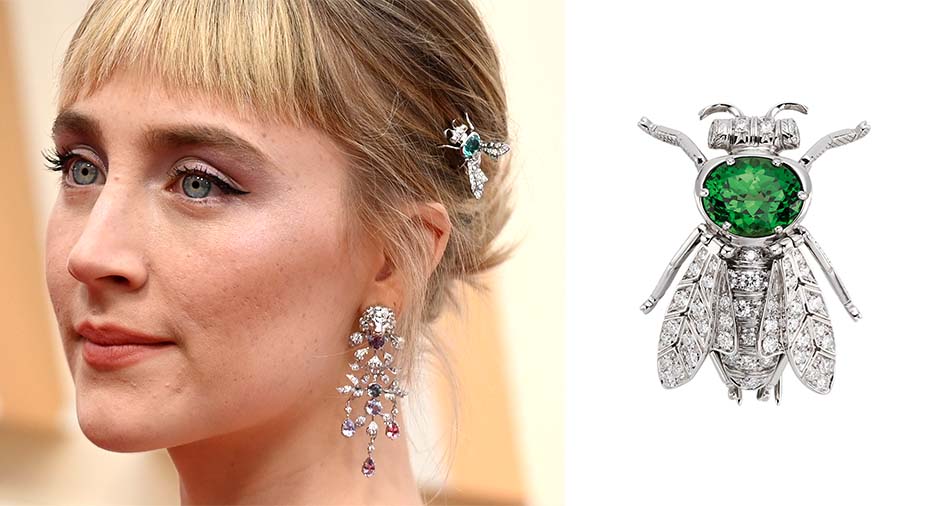 Statement necklaces topped the Oscars’ red carpet trends, and Mindy Kaling’s early arrival helped set the tone. She paired her marigold-hued Dolce & Gabbana gown with diamonds by Chopard, including a high-jewelry necklace crafted of almost 125 carats of marquise- and round-cut diamonds, all set in 18-karat white gold. Kaling finished the look with high-jewelry diamond earrings and a ring from Chopard’s Magical Setting collection. 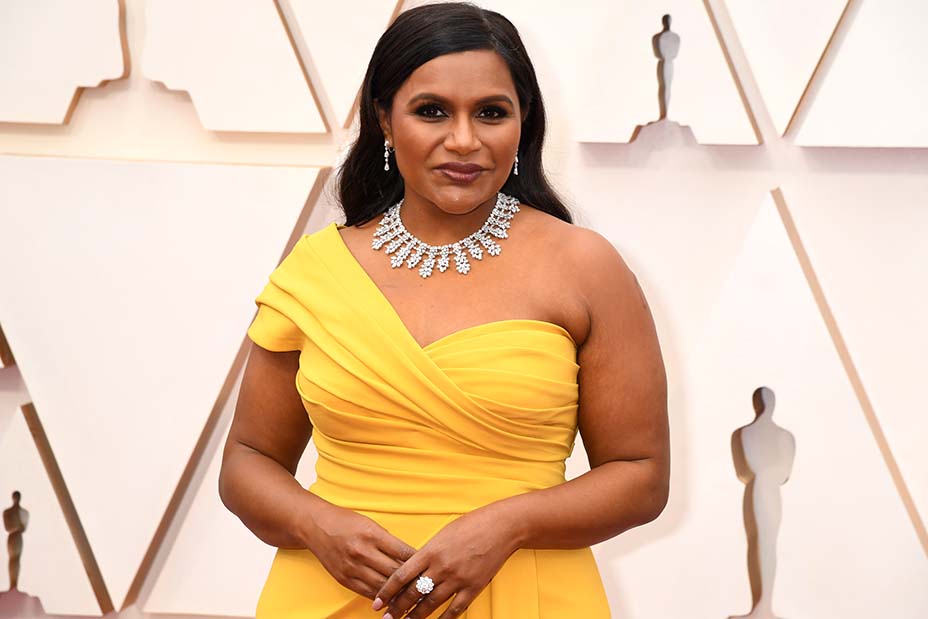 Appearing onstage with Will Ferrell, her co-star in Downhill (set to open Friday), Julia Louis-Dreyfus went for the minimalism of a navy Vera Wang gown. It was offset by the sparkle of more than 92 carats of Harry Winston diamonds, including the house’s Wave diamond necklace, featuring 60.18 carats of diamonds set in platinum. 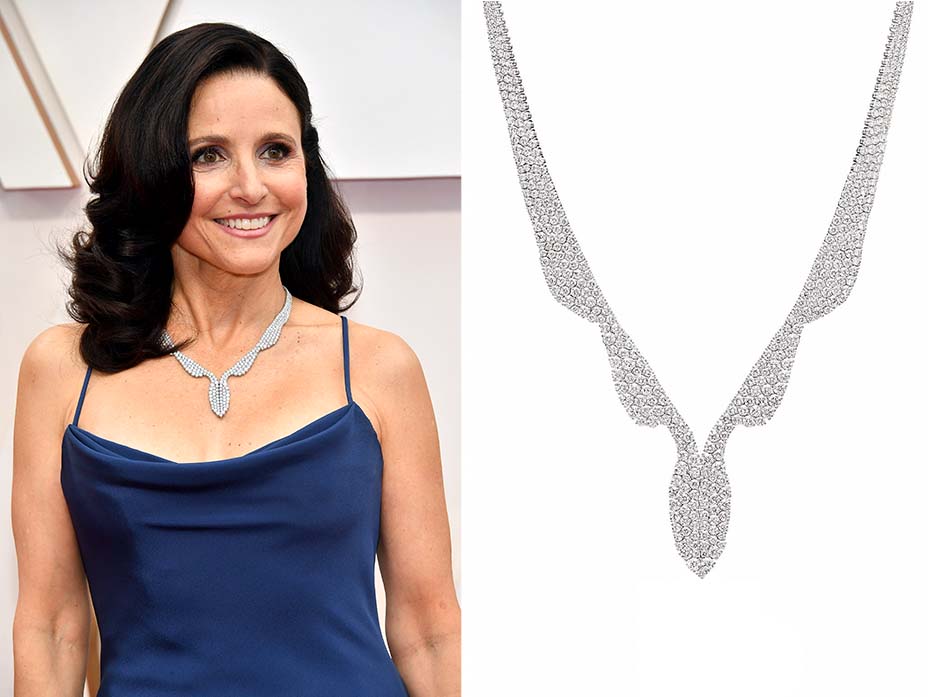 Little Women director and screenwriter Greta Gerwig always seems to make forward-thinking choices for her red carpet looks, but she opted for a style that was more luxe and traditional at the Academy Awards. Gerwig’s Dior Haute Couture belted gown — a deep olive green — made her choice of jewelry all the more interesting. Gerwig’s high-jewelry necklace by Bulgari featured seven bright emerald beads totaling 56.13 carats, surrounded by white diamonds totaling almost 26 carats and set in platinum. 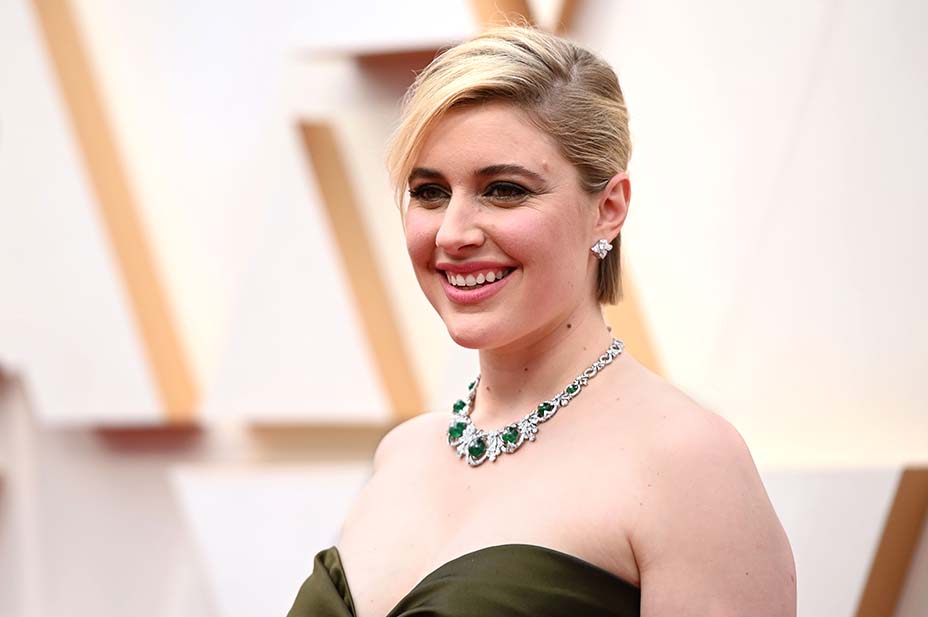 With a bright red Valentino gown festooned with side ruffles, Wonder Woman 1984 co-star Kristen Wiig opted for an equally modernist take with her jewelry. Wiig’s fringed earrings of 18-karat yellow gold are by Nikos Koulis, a jewelry designer based in Athens (Fred Leighton carries his pieces in the U.S.). 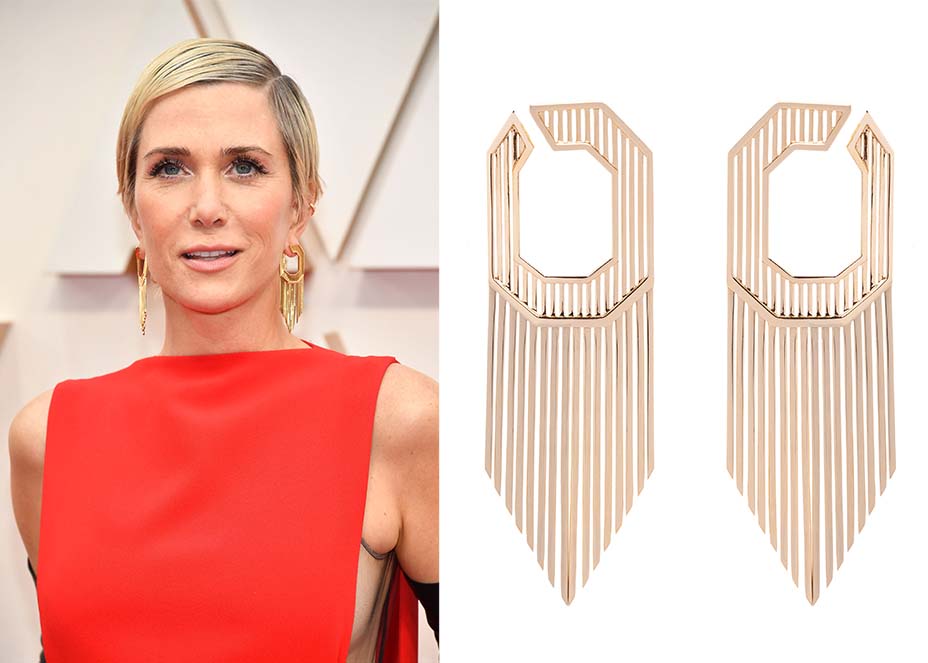 Double Oscar nominee Scarlett Johansson sparkled from head to toe, pairing a pewter gown with a draped-fringe bodice, a custom look by Oscar de la Renta. She wore an exceptional pair of diamond drop earrings that were a collaboration between Forevermark and jewelry designer Anita Ko. The earrings were crafted of pear-shaped and round-cut diamonds totaling 26.65 carats and set in white gold; fold in Johansson’s diamond bracelet, also by Forevermark, and her jewels for the night totaled $2.5 million. 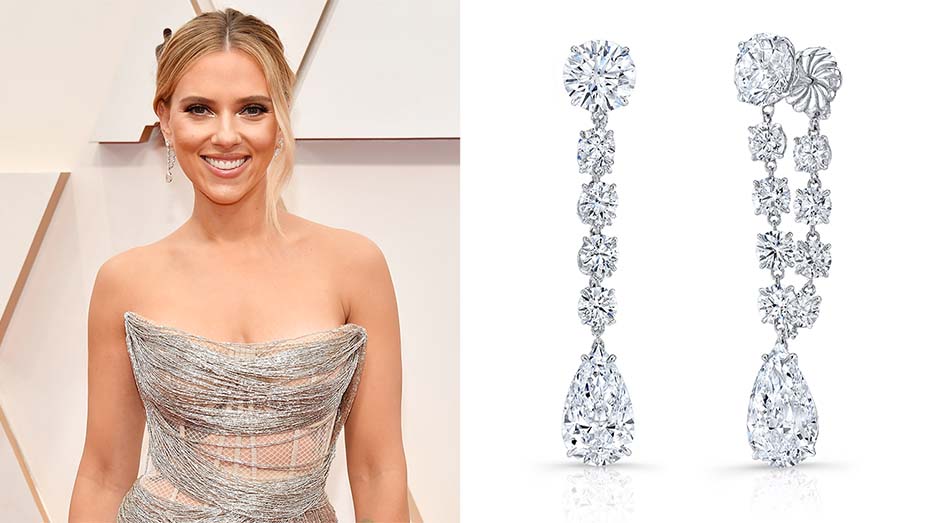 15 Most Memorable Fashion Looks at the Oscars