When most artists finish a major tour, they typically and almost immediately jet off to an island and take a couple days (read: weeks) off to recharge.

Beyoncé and Jay-Z have never been like most artists.

Seven days after the final night of On the Run II — the global road trip headlined by the superstar singer and superstar rapper — Beyoncé agreed to take the stage at Barker Hangar in Santa Monica to perform a four-song set while her husband handled podium duties. For good reason: City of Hope dedicated its 45th Spirit of Life Gala on Thursday to their longtime friend and music publisher, Warner Chappell chairman and CEO Jon Platt.

Grammys Debated Whether Beyoncé's 'Renaissance' Should Compete in Dance (Exclusive)

Having those three names on the invite, along with host Pharrell Williams, was enough to make the fundraiser a complete sellout with a total of 1,200 guests in attendance and a total of $6 million raised for City of Hope’s programs and initiatives in researching and treating cancer, diabetes and other life-threatening diseases. “Nobody gets to their goals alone,” Platt said during his acceptance speech in front of a crowd that included A-list executives along with Quincy Jones, Dr. Dre, Usher, Tiffany Haddish, Timbaland and Rita Ora. “This has only been possible because we did it together.”

Platt talked a lot about togetherness, inclusion, loyalty and the benefits of hard work during his 20-minute acceptance speech. And because he prides himself on having “great self-awareness,” he made it clear that he was well aware that despite being the night’s sole honoree, he was merely the opening act for the performer waiting in the wings. It wouldn’t be fair to Platt’s passionate, emotional and respectful speech to simply say that Beyoncé stole the show, but she did cast quite a spell, bringing everyone to their feet while turning every head courtesy of a glittering Ralph & Russo couture creation with a thigh-high slit. 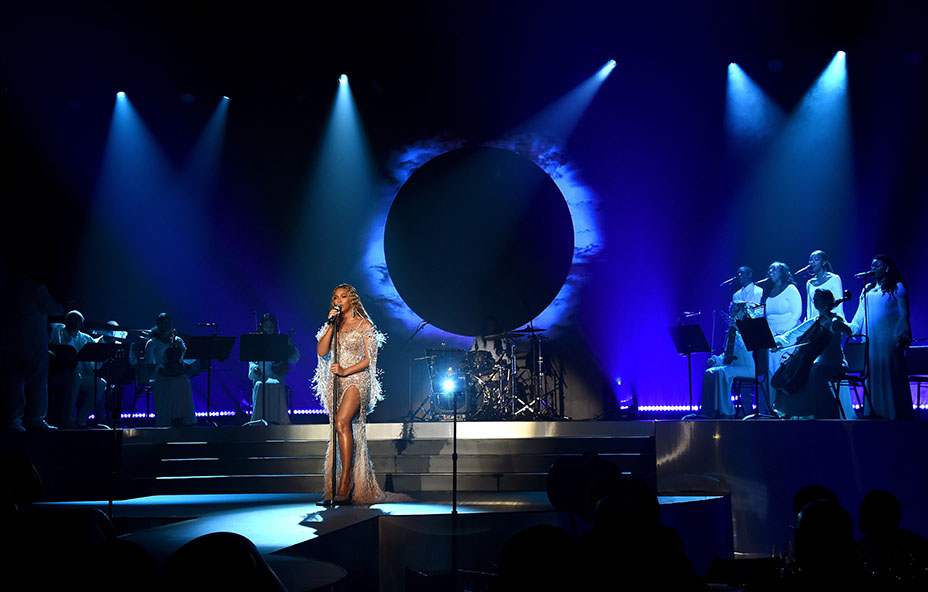 She also praised Platt. “Most people lead with their ego, but you lead with your heart,” she said upon taking the stage. “You have touched so many lives, mine included,” said Beyoncé before making a request. “I’m going to sing and I want everyone in this room to sing along with me.” Beyoncé then launched into a set that included “XO,” “Ave Maria,” a rendition of her duet with Ed Sheeran on “Perfect,” and “Halo” as the finale.

Again, after turning in an electric performance at a glitzy gala, most artists then speed toward a waiting SUV and head for the hills, the club or home. Not Beyoncé and Jay-Z. They hung out during the intimate post-gala afterparty, which featured Jermaine Dupri as DJ, cocktails by D’Ussé, chocolate chip cookies, sliders and freshly made pizza by Jon & Vinny’s, which catered the main meal. That came well after 10 p.m., however, and there’s still much more to say about the night’s speeches including Jay-Z’s award presentation.

“I can’t think of anyone more deserving to be prized in front of their peers, in front of the world than my brother Jon Platt, the artist formerly known as Big Jon,” said Jay-Z in opening his remarks, which included a funny jab at host Williams (“You see Pharrell came with the shorts; he feels so entitled”). “Jon makes you feel like he has your undivided attention. Every single one of us thinks that Jon belongs to him. Jermaine [Dupri], he doesn’t [belong to you]. … He’s definitely mine.” 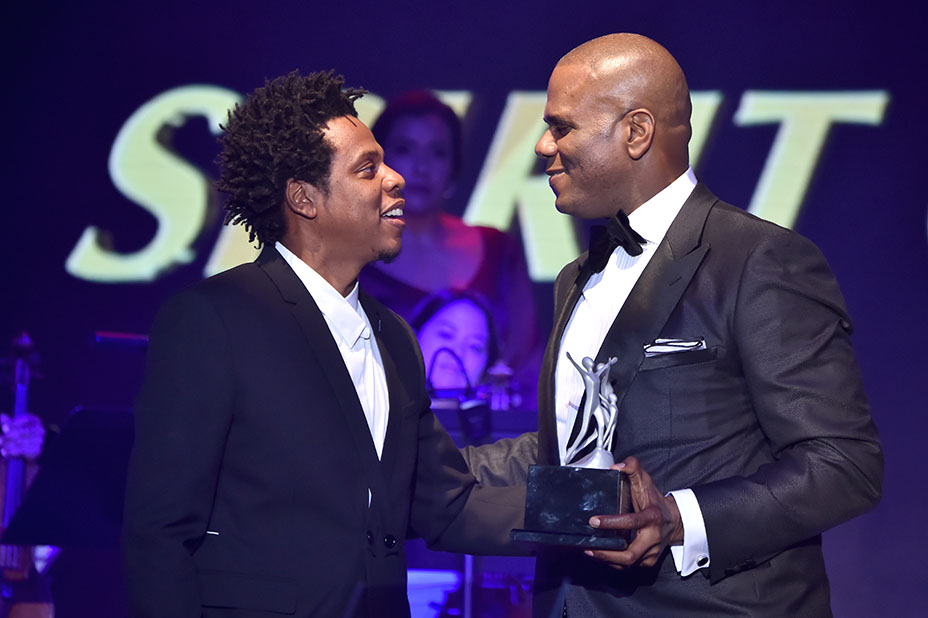 Proving his ownership point, Jay-Z recounted a bit of his history with Platt, noting that they have worked together since 1997. “My contract is tied to his. If he leaves, I leave. Period,” said Jay-Z, which could’ve been a reference to Platt’s imminent departure from his top Warner Chappell post, something that has been widely reported.

“Jon called me on a Sunday when I was about to have date night [saying], ‘Man, this song I heard, I think you can do something with it,” Jay-Z noted of the song “Empire State of Mind,” a collaboration with Alicia Keys. It became his first, “maybe my only No. 1 record in the whole world. It’s beautiful that Jon made that happen. And he made that happen on a Sunday. His passion —what were you doing on a Sunday? It’s the person that he is.”

Jay-Z then explained a bit more about the person Platt is, letting the crowd know more about the man whom he praised as “the Obama of the music industry.” He’s an amateur photographer, an audiophile and a cycling enthusiast. “He has the whole suit with the helmet and the butt pads,” Jay quipped. “I’ve been trying to catch him. No one’s ever caught a picture. He’s very behind the scenes, so I know he’s super nervous tonight to be in front of all these people, and that’s making me so happy.”

Platt didn’t seem nervous at all, however, after making his way to the Spirit of Life podium, something industry heavyweights like Quincy Jones, Mo Ostin, Clive Davis, Frances W. Preston, Shelli and Irving Azoff, Doug Morris, and Sir Lucian Grainge have done before him. He first thanked the man who handed him the award. “To Jay, for more than 20 years, your genius, friendship and loyalty,” Platt said as he teared up, “has helped define me in this industry. From the bottom of my heart, I know for a fact that I wouldn’t be on this stage tonight if you hadn’t come into my life.”

He then thanked the night’s other program participants including Haddish, Warren Campbell, Trombone Shorty & Orleans Avenue and gospel duo Mary Mary, and shed some light on why he accepted the night’s honor. (Also important to note: Platt’s son Jonathan said during the tribute video that his father is only the fourth African-American man to be honored with the prize in the org’s history.) 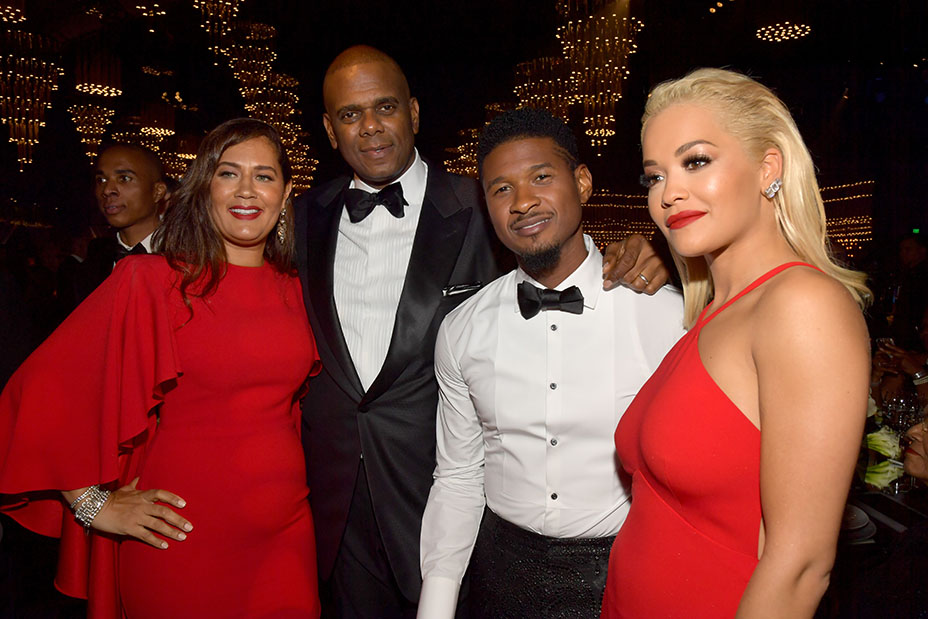 “It was very important for me — if I was going to do this — I told them when they came to my office if we’re going to do this, we gotta do it my way, meaning I’m not going to be the only brother in this room. I’m going to bring all my friends with me,” said Platt, who referenced the importance of diversity several times throughout his speech. He even had strong feelings about the night’s dress code. “It was important to me that it was black-tie because I wanted you to see us at our best. And I want you to remember what happens when you make a point to not exclude anybody and actually include everybody. Because when you include everybody you make it possible for a Robert Smith to come in the room and drop a $500,000 donation. At a time in our country when so much is broken, it’s important that we focus on those who are doing great in this world.”

That huge donation from the Colorado-born billionaire, who is credited as the wealthiest African-American in the United States, was announced earlier in the evening. The founder, chairman and CEO of private equity firm Vista Equity Partners handed over half a million to City of Hope, with the stipulation that half go to prostate cancer treatment for black men while the other half be put toward breast cancer research for black women.

“Like many of you here tonight, my family has been impacted by some of the diseases that City of Hope is fighting every day,” Platt said, mentioning that his son Jonathan was diagnosed with diabetes nine years ago and that he recently lost close friends Jay “Ice Pick” Jackson and Dave Nelson to cancer. “When [my wife] Angie and I visit the City of Hope, we saw first-hand the work City of Hope is doing. Over the last few months, I’ve had the privilege to meet with the people at City of Hope, the people that give City of Hope its name, beginning with patients like Kommah McDowell, who you saw here earlier this evening. … City of Hope is more than a hospital, it’s a family. It’s a home for hope, care and miracles, and with a mission like that, I take this honor so seriously tonight.” 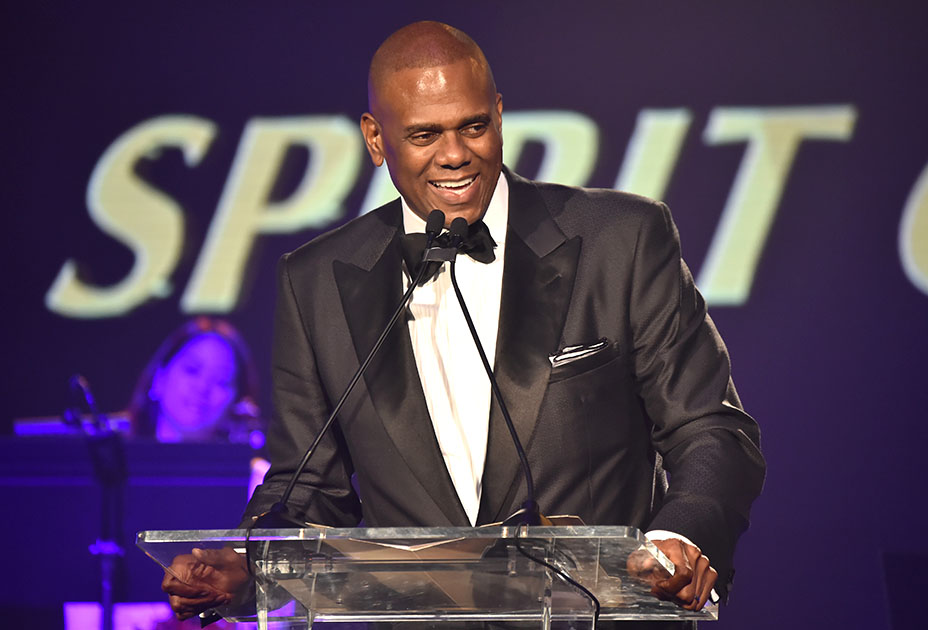 He offered another reason, too. “As an African-American CEO, I proudly embrace the responsibility to lend a helping hand to people of color who are coming up in this industry as well as to represent my friends and my colleagues who are already doing good in this game,” Platt explained. “Because we’re more than just athletes and entertainers, we’re CEOs, we’re cancer survivors, we’re a lot of things.”

Platt has been a lot of things in his career. He started out as a DJ in Denver before moving on to managing producers, rising the ranks in A&R and eventually working as a publishing executive. He did not mention the rumors that he’s en route to take the reins at Sony/ATV but he alluded to it. “I got bold with my dreams. I’ll admit it to you tonight, I dreamed of running the largest music publishing company in the world one day, and a few weeks ago, I opened my eyes and I could see it,” he said. 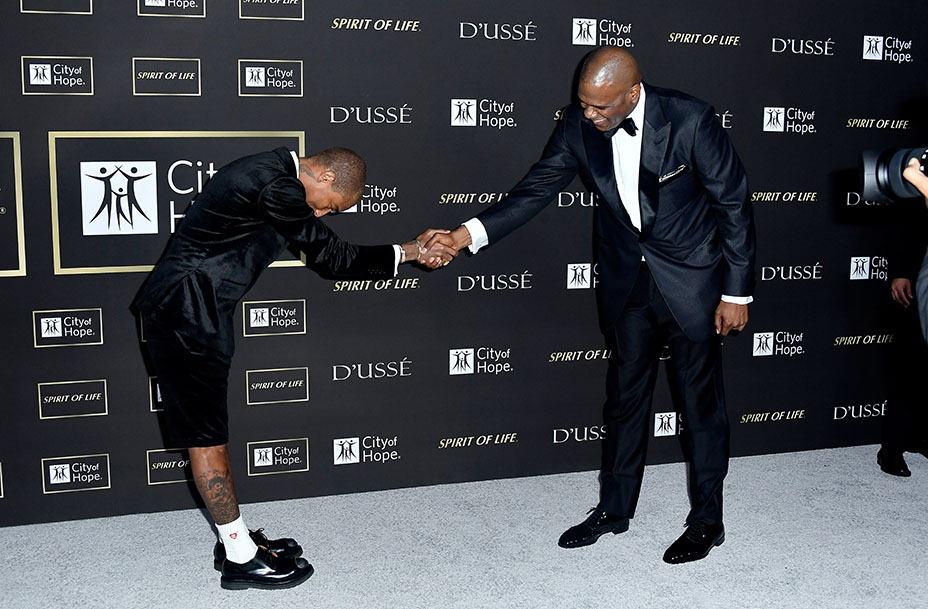 The other time his eyes filled up with tears came when he name-checked Clarence Avant. “I want to say thank you for being the closest thing to a father that I ever had,” said the towering executive, who attended the event with his wife, son Jonathan, twin sons Shawn and Clarence, his mother and many cousins. He also thanked songwriters “who represent diversity in all its forms, as you continue to prove every day, that genius does not discriminate.”

“I’m so lucky to work with someone that inspires me the way she does. I’m so lucky to work with someone that every time I walk away from her, I say to myself, ‘I gotta work harder,'” he said. “On her recent tour with Jay that just concluded, as I watched audience after audience lose their mind, my thought went to her journey, and I was reminded that even when you’re the biggest talent in the world, it still comes down to hard work. You see she leads by example. She shows all of us how to dream big and how to believe in what’s possible, but most importantly how to help and inspire others. That’s the real spirit of life.”

It’s clear that Platt listened to his own words about Beyoncé’s work ethic because he also noted that no matter what happened on Thursday night — how many tears were shed, or how emotional it became — he was still going straight to the office first thing. 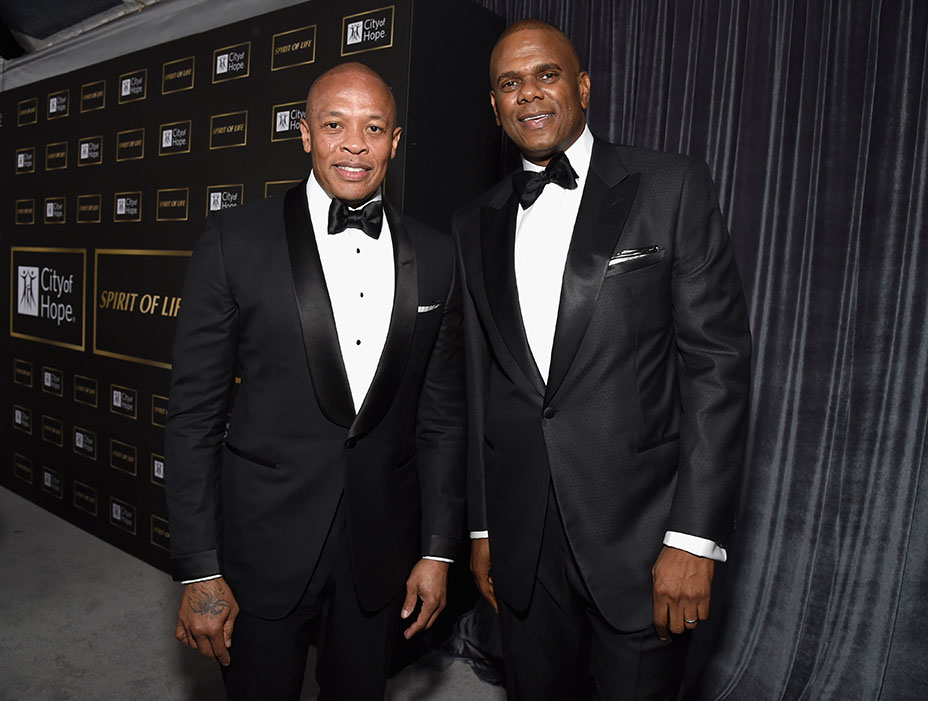 Made it to #SpiritofLife18. One of first to arrive is man of night, honoree Jon Platt of @WarnerChappell with his family (twins!). Jon is one who called @Beyonce to ask her to perform tonight and he says she said yes immediately because of @cityofhope mission, work. pic.twitter.com/cVVUYek667

Jay Z, who never makes these kind of cameos, steps out to honor Jon Platt: “such a selfless human being. He’s nonstop. Every one of us feels like Jon belongs to us. He doesn’t … he’s definitely mine.” #SpiritofLife18 @cityofhope pic.twitter.com/bsISjHaPlm