With the midterm elections approaching Nov. 6, an array of Hollywood stars are encouraging voters to take to the polls. Though some may create PSAs, like Brad Pitt and Leonardo DiCaprio did, or create a mobile trivia game, like Samantha Bee did, comedian Billy Eichner took a “glam” approach to appeal to voters.

Partnering with Funny or Die, Eichner launched the “Glam Up the Midterms” initiative in February with the aim of campaigning to encourage voters under 40 to fight for democracy and to vote in the upcoming elections. Earlier this year, Eichner teased the initiative in a promo where he previewed the “hottest event of the year. “Get ready for the hottest event of the year,” Eichner says in the promo video. “No, it’s not the Grammys, the Oscars, or the Golden Globes. It’s the 2018 midterm elections.”

Funny or Die kicked off its midterms initiative with Eichner with two events in California. In April, Eichner visited a San Diego high school with special guest Ron Burgundy, Will Ferrell’s infamous character from Anchorman. A month later, Eichner encouraged voters during a patriotic panel in RuPaul’s annual DragCon. Throughout the year, Eichner has been vocal about the initiative, hosting events and enlisting celebs to help spread the importance of voting, such as releasing a mock-PSA centered on a Non-Voters Anonymous group that featured Mandy Moore, Randall Park, Kumail Nanjiani, and Darren Criss.

Despite Eichner having voiced his opinion on President Donald Trump, the initiative is recognized as being nonpartisan, teaming up with Headcount, a nonpartisan, nonprofit that works to promote participation in democracy by signing people up to vote at large events. The organization is best known for registering voters at concerts.

To further offer insight into their initiative and their plans for election day, Managing Director and executive producer of Funny or Die D.C., Brad Jenkins, spoke with The Hollywood Reporter about their hope to break youth voting records, enlisting “trusted comedians” to encourage voters and making democracy “entertaining.”

Can you walk us through how “Glam Up the Midterms” came to be originally?

Billy Eichner and Funny Or Die have a long history of working together with Billy on the Street. I met Billy when I was working at the Obama White House and we collaborated on the Emmy-nominated video with Billy and Michelle Obama for Let’s Move! So when he came up with “Glam Up the Midterms” to make this year’s election accessible, loud and urgent — Mike Farah and I jumped at the chance to collaborate with Billy again. We knew this was a campaign that would break through with young voters.

What made Funny or Die partnering with Billy the perfect choice for “Glam Up the Midterms”?

FOD has been doing political partner campaigns with national organizations and advocacy groups for the past three years. So we were a natural partner to create a full campaign that lived both online and offline. Billy made very clear that it’s not worth doing unless we have a specific and measurable impact on the electorate. And that’s the work that Funny or Die does with some of the biggest organizations in the country like NRDC, which made “Glam Up the Midterms” possible.

Stars such as Sarah Silverman, Jimmy Kimmel, Will Ferrell and John Oliver have all helped with “Glam Up the Midterm” events. Did you have anyone you specifically wanted to be involved and/or have other stars also expressed their interest in being involved?

Young people’s faith in institutions are at an all-time low. We distrust media, cable news, fake news on Facebook, celebrities, etc. But polls prove that millennials still trust comedians, especially late-night comedians like John Oliver, Jimmy Kimmel, Wanda Sykes or Stephen Colbert. So we enlisted as many trusted comedians as we could. Many past youth vote programs sometimes blindly rely on random celebrities with the biggest followings. We prefer to work with talent who are trusted voices to communities. Comedians are always at the top of the list.

With the elections fast approaching, what “Glam Up the Midterms” events do you have lined up?

We have done 10 events all over the country from San Diego to Las Vegas to Houston to Phoenix to Detroit to NYC. It’s been a wild ride. Also, worth noting that Billy was crisscrossing the country while working on three projects simultaneously: Lion King, American Horror Story and Billy on the Street. He is a great American.

While many have been vocal about the importance of voting, nonvoters still say politics are boring or that voting is tedious. How do you go about tackling that mentality with these events?

We actually make the events entertaining. When leaving our first event with Will Ferrell (as Ron Burgundy) and Billy Eichner in San Diego, there was this high school senior yelling to her mom, “That was the most hilarious thing I have ever been to!” I have produced virtually every kind of political event — a campaign rally, a White House meeting with the President, voting events with celebrities, etc. But I have never heard anyone say something like that. Especially a young person at a get-out-the-vote event for a June primary for a midterm election. There is no reason why we can’t make democracy and citizenship more of an entertaining and inspiring experience. 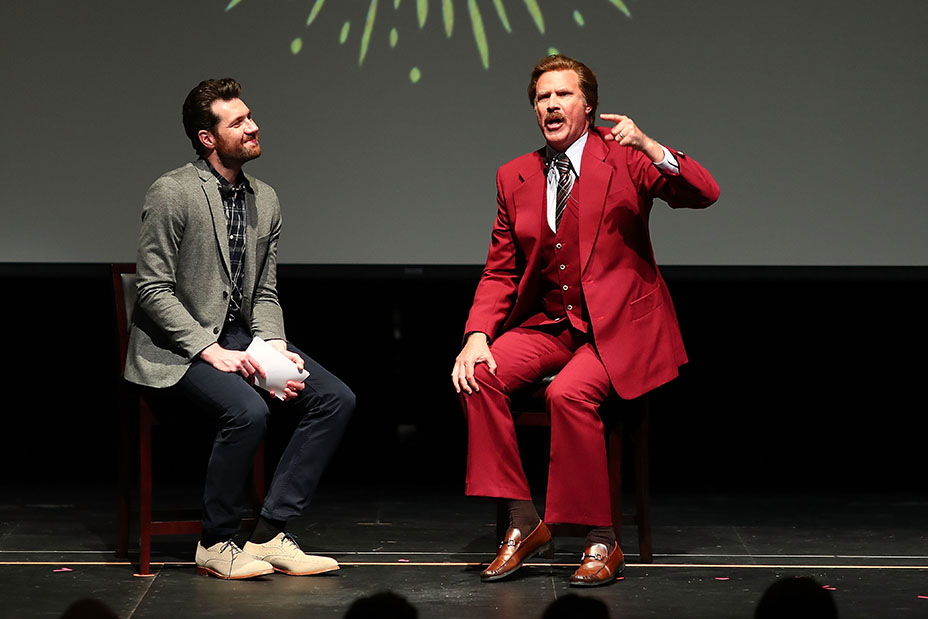 Despite Funny or Die being known for comedy, the website ventured into politically geared comedy even before the Trump presidency. What inspired this direction and what other initiatives would Funny or Die possibly want to tackle in the future?

Funny or Die has always been political. Whether it was the Paris Hilton response ad to John McCain back in 2008 or Prop 8 the Musical. So, being funny and making an impact is in the company’s DNA. I joined Funny or Die after my years in the Obama White House and working on Between Two Ferns with President Obama. That video showed the world that Funny or Die can have an outsized impact with the youth vote. Since joining FOD, we have done over 40 campaigns with political organizations, foundations, PACs and brands. For the future, we are excited to jump into more international work with organizations like UNICEF and Amnesty International.

What would you hope people take away from “Glam Up the Midterms?”?

Only about 12 percent of millennials voted in the last midterms and they are the largest eligible voting bloc in the country. We have to do better. The goal of “Glam Up” is for young people to realize and seize their voting power. Billy has been able to make what is typically an under-the-radar midterm election feel urgent and exciting. There’s no one better than Billy Eichner at making people stop on the street and pay attention.

What do you personally feel is the best way to “glam up” elections?

It’s all about the “I Voted” sticker selfie. It’s a big moment, millennials. Glam up, pull the lever, get that sticker and post that photo. “Glam Up the Midterms” and Billy will be retweeting all of your “I Voted” messages.