At the 2019 Tony Awards, held Sunday night at Radio City Music Hall in New York, the irrepressible Billy Porter stepped onto the red carpet in a pro choice-themed ensemble with an embroidered motif of female reproductive organs to support women’s abortion rights during the currently roiling cultural debate.

The Pose star’s custom red velvet look, created by New York label Celestino Couture, is described by the designer as a “gender-fluid evening suit” and shimmers with over 30,000 Swarovski crystals. It has another layer of significance as well, since it was made from a salvaged curtain backdrop from the Broadway production of Kinky Boots, for which Porter won the 2013 Tony for best actor in a musical. (The show’s Broadway run ended in April after 2,507 performances.) 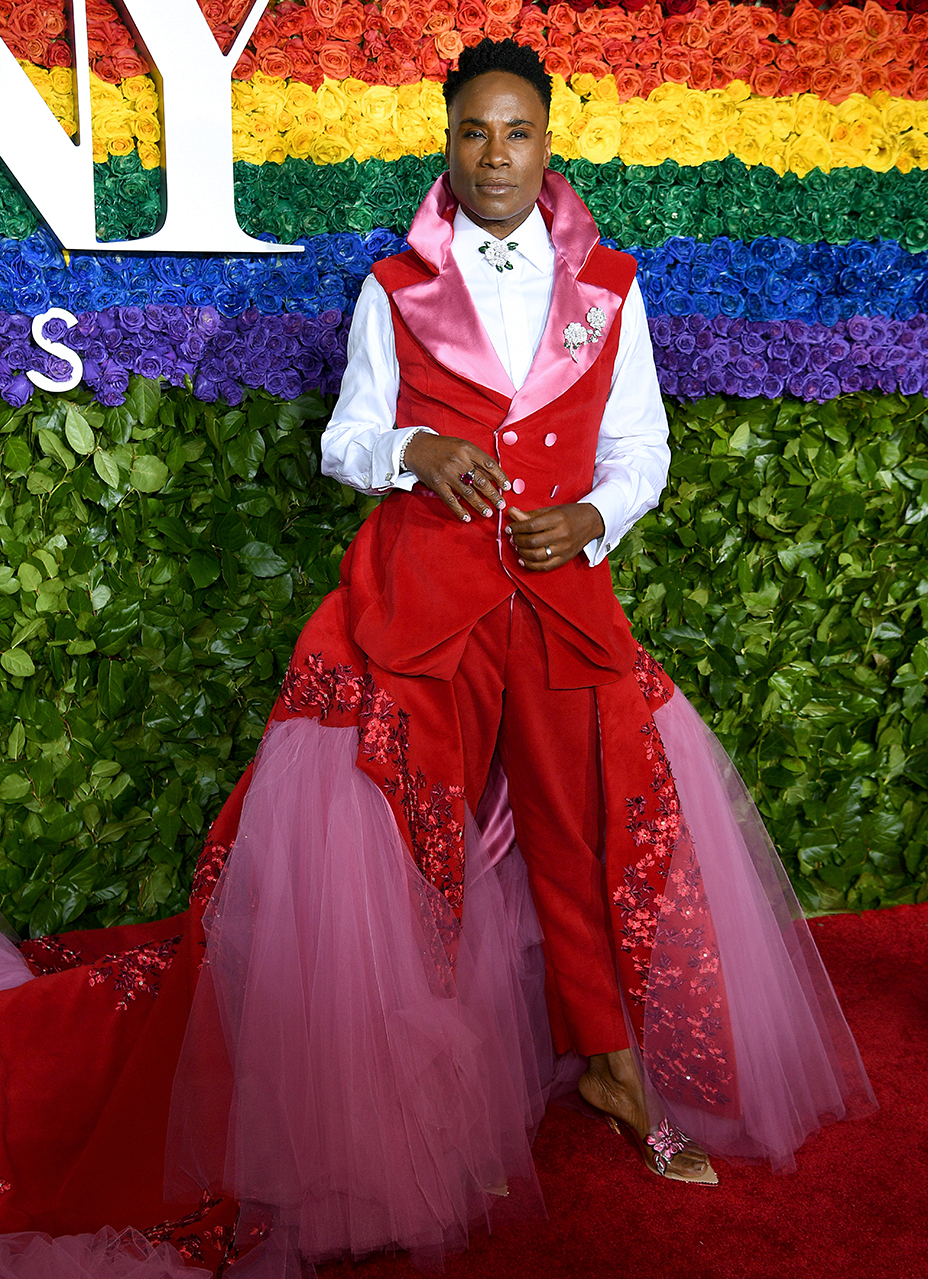 “It’s a beautiful nod to Elizabethan couture,” said Porter, speaking to The Hollywood Reporter exclusively on his way to the red carpet.  “At the fitting, we spoke about making a pattern on the train that was in the shape of a uterus, but not obvious, of course. And I thought it was awesome because women’s rights are under attack right now. I’m an advocate for all who are disenfranchised. None of us are free until we’re all free!”

He continued: “I really want to make sure that I’m showing up for all of the disenfranchised people I can so that we can find power in our unity. This government is trying to take away the woman’s right to choose and that’s unacceptable. No!”

“Billy is such an inspiration,” said Celestino Couture designer Sergio Guadarrama. “It takes people who have his spirit and view of life, and you can create something really amazing.”

Porter and his stylist Sam Ratelle collaborated with the designer and his team at the fashion house, which works only with up-cycled fabrics and organic materials. Porter’s look features a subtle embroidered motif, suggestive of a diagram of a woman’s reproductive system, and is embellished with some 30,000 Swarovski crystals. 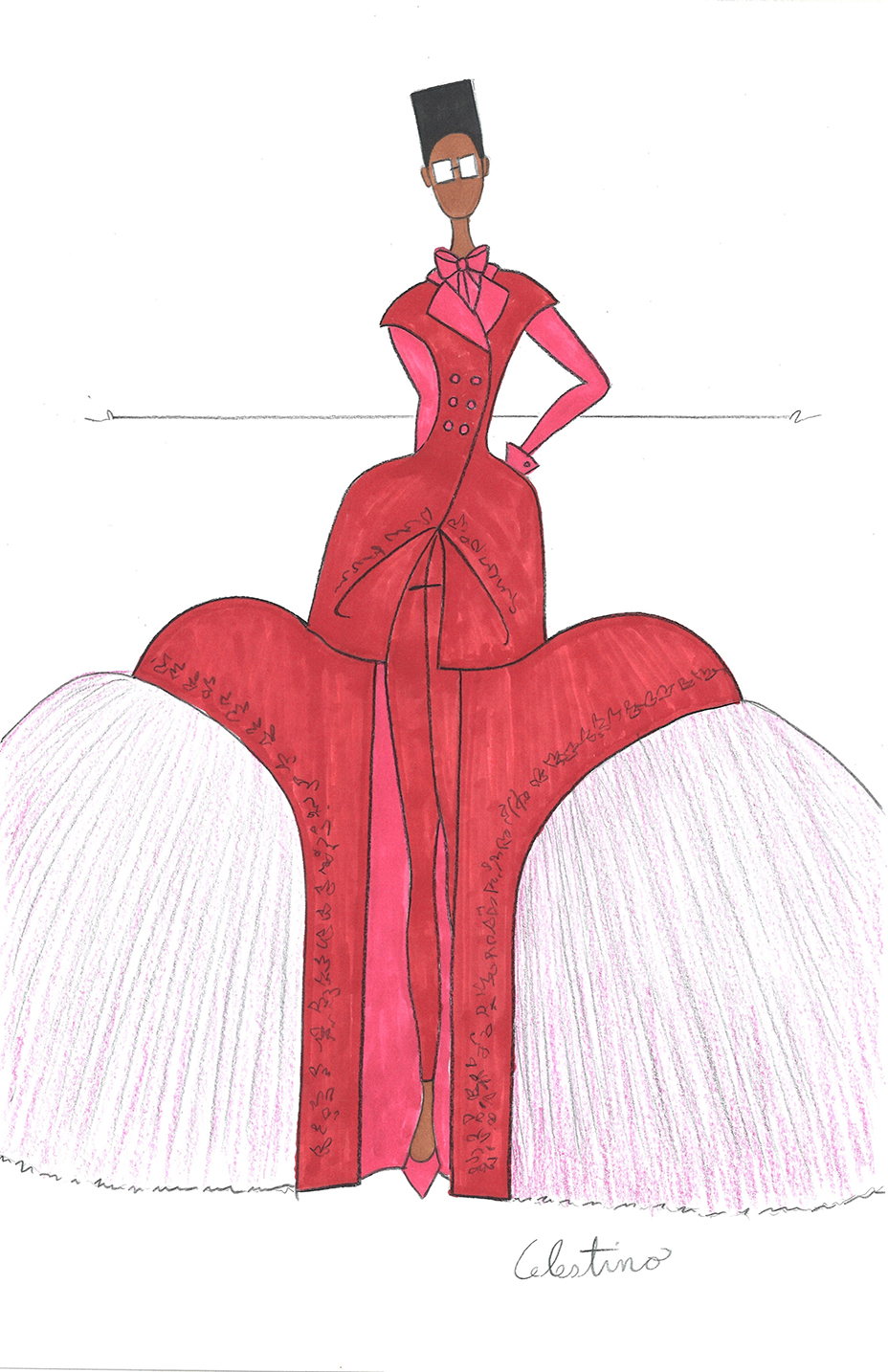 “When you look at something that is that beautiful, then we can have difficult conversations and it becomes empowering,” said Guadarrama. “Everybody needs to be heard and represented, and we need to help each other. At the end of the day, the only way we are going to make a difference in the world is by coming together.”

Ratelle originally connected with the designer after he pulled a runway gown that Porter ended up wearing to the Peabody Awards. “And I thought it was just so incredible that they make couture out of recycled fabrics and they want to be environmentally conscious and eco-friendly. It’s so stunning — I wish everybody would work this way,” he said. So, with just a couple of weeks to go before the Tonys, Ratelle approached them about creating the awards-night look. “‘For Billy Porter, whatever you need.’ they said. When I told them it was for the Tony Awards, they died!”

And for the outfit, Porter and Ratelle had some very special fabric in mind — the Kinky Boots curtain that had been donated to former stage manager Jennifer Kahn’s upstart company Scenery Bags, which takes retired theatrical backdrops and recycles them into bags. (In its two years of operation, the company has up-cycled more than 15,000 pounds of discarded material from stage productions.)

“I contacted Billy and Sam and asked if they wanted it, and they took the ball and ran with it,” Kahn said before the Tonys. “It had been hanging for six years, so we did have to clean the dust off of it. But it will look great on Sunday.”

Scenery Bags supports TDF’s Introduction to Theatre youth program serving underprivileged children and the Accessibility for Students effort that provides access to Broadway and off-Broadway performances for students who are vision- or hearing-challenged, with a portion of each bag it hand-produces in New York. The unused portion of the Kinky Boots curtain will also be translated into bags for the line and available for purchase.

Porter is accessorizing the look with a 25-carat ring and diamond bracelet from Oscar Heyman and made-to-order shoes from designer Orel Brodt with a Medusa theme that underscores the women’s rights message.

At the Pose premiere on Wednesday, Porter stepped out in a matador-inspired look that sent an anti-bullying message. Created by Filipino fashion designer and architect Francis Libiran, the ensemble took over two-and-a-half months to make. Ratelle said at the time: “It’s very synergistic to be a bullfighter. We’re fighting bullies all the time.”

A graduate of Carnegie Mellon University, Porter will come full circle Sunday night at the Tony Awards by presenting this year’s Excellence in Theater Award on behalf of his alma mater.