A presenter at the 62nd Grammy Awards, Pose star and “Love Yourself“ singer Billy Porter continued his ode to disco (a nod to his continuing pursuit of a music career) in a “bright blue disco fantasy jumpsuit,” according to stylist Sam Ratelle, designed by Baja East creative director Scott Studenberg.

The look (including Alexis Bittar jewelry, a Judith Leiber handbag with hand-cut crystal and crystal fringe, and custom Coach boots encrusted with over 9,000 crystals) boasts over 70,000 Preciosa crystals.

Demonstrating his love for drama, Porter topped his look off with a Preciosa crystal fringe veil that retracts at the push of a button (electronics by SmoothTechnology) into a matching custom bucket hat by Sarah Sokol Millinery in collaboration with Baja East. The hat was inspired by Billie Eilish’s Burberry bonnet at the AMAs, Ratelle (who held the clicker controlling the veil) explained on the red carpet, although Porter did not want the fringe to cover his face. 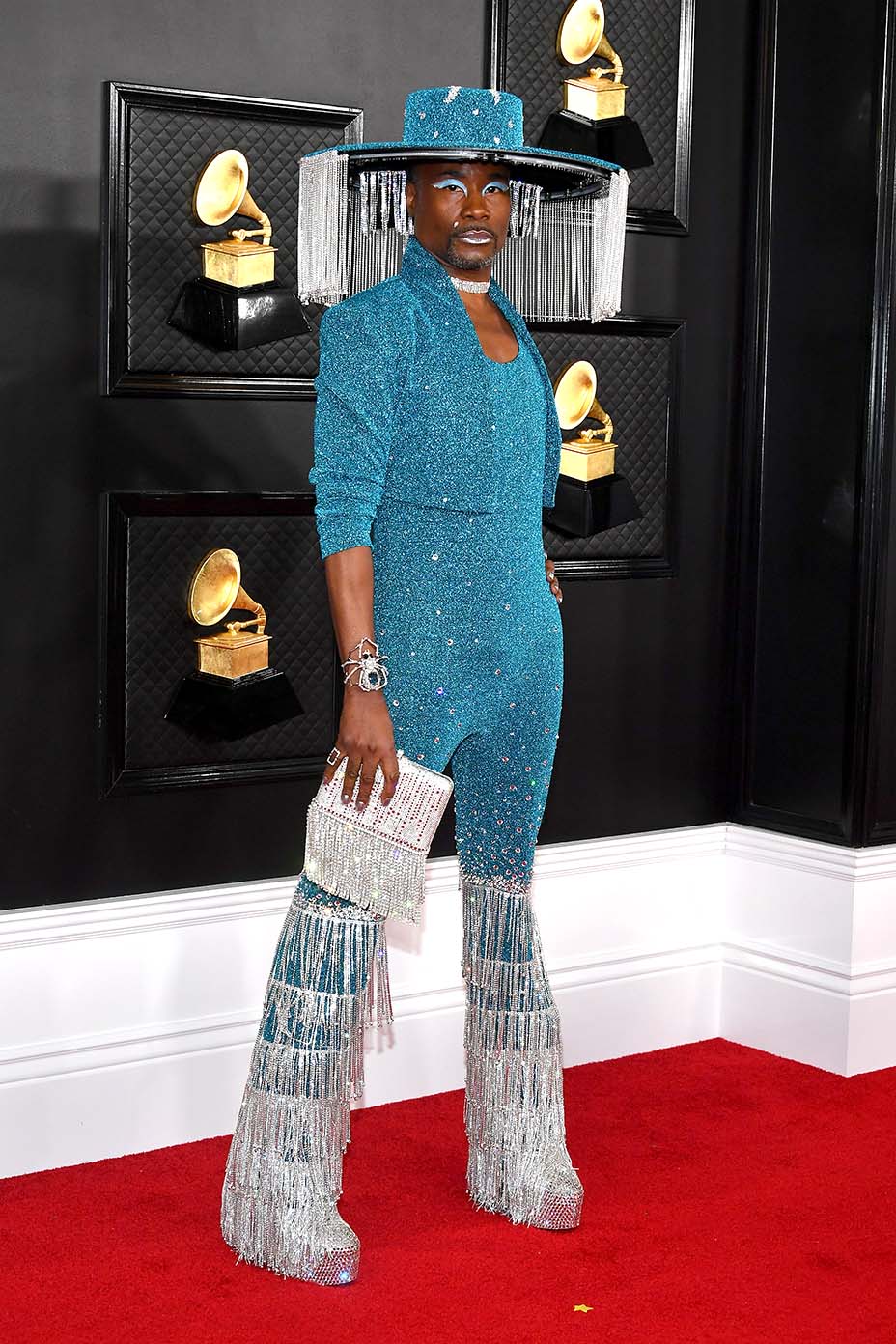 At the 77th Golden Globes, Porter wore a white feather-bedecked tuxedo look embellished with some 4,000 Swarovski crystals, accessorized with over $2 million worth of Tiffany & Co. diamonds, including an $11,000 diamond pinky ring in the shape of a disco ball, as an ode to his new “disco era.”

While co-hosting Dick Clark’s New Year’s Rockin’ Eve, the Pose star rang in 2020 in riffs on the tuxedo with disco vibes. His performance look that evening included a heavily embellished moto-punk jacket designed by New York-based fashion label The Blonds that weighed about 25 pounds, along with a metallic cummerbund and glittery gold Giuseppe Zanotti ankle boots. Another ensemble was a glittery suit from Michael Kors’ Studio 54-inspired fall 2019 runway collection.

“Billy loves to feel sparkly and have that light shine back into the audience,” Ratelle told THR at the time.

At the Emmys last September, Porter also donned a custom Michael Kors Collection suit, inspired by the 2020 resort collection, embellished with 130,000 crystals. It, too, played into the music theme.

“He’s such a fan of the disco era and people like [disco-era singer-songwriter] Sylvester,” Ratelle told THR exclusively prior to that awards show. “Now that he’s jump-starting his music career again, after having the number one single ‘Love Yourself,’ we’re heading in that direction. … It was something we want to roll with, keeping this disco theme going [that started with his 50th birthday party in September] and what that means for now. What does a disco star look like in today’s age?”