Billy Porter has done it again. The Pose actor and Grammy winner managed to follow up his look from last year’s Oscars, when he wore a tuxedo dress by Christian Siriano, with another fiery outfit.

On Sunday for the 2020 Oscars, Porter stepped out in a “Cupola gown,” custom-made by Giles Deacon couture. The Phoenix ensemble included a 24-karat gold-foiled feathered top and artistic orange printed skirt. Porter’s stylist Sam Ratelle added Jimmy Choo boots in gold metallic with a custom platform, a custom handbag by Judith Leiber Couture, Atelier Swarovski gems (including a bracelet with 47 carats of rose quartz) and even embellished glasses by Dita and Mercura NYC.

“The Oscars is Hollywood royalty’s biggest night of the year and this look is all about royalty,” said Porter in a statement. “As a black man and a member of the LGBTQ community, I am beyond proud to stand on the red carpet at the Oscars in a gorgeous gown…. Representation matters and I hope that my look encourages people to wear what they want to wear, be who they want to be and take chances in life.”

Deacon said the gown was conceptualized based on the Cupola Room at Kensington Palace in London. “A place of music, theater, and art-adorned pilasters by the artist William Kent, I wanted the piece to evoke the ethereal sense of beauty,” he said in a statement. “The skirt, printed on silk duchess, is a manipulated artwork of the striking elements that adorn the walls.”

Ratelle explained that many months ago, he received a “completely random call” from Kensington Palace to invite him to take a private tour. “I left completely awestruck and inspired,” he said. “It dawned on me that the Oscars is a royal event — Hollywood Royalty. I immediately had the idea to collaborate with Giles and use my visit to Kensington Palace as the starting point for the design.” 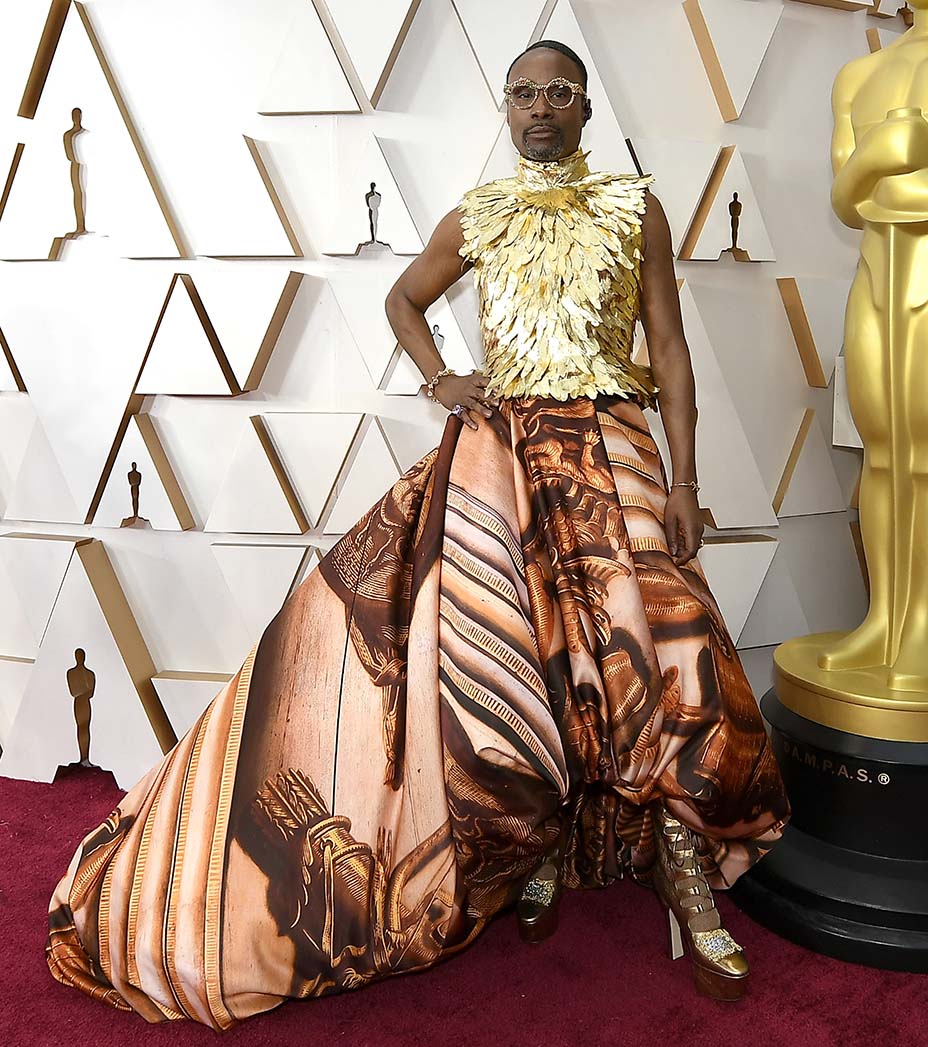 Last year Porter shocked on the red carpet in his Oscars dress and followed up the sartorial statement this awards season with several high-voltage looks that took on fashion’s gender binary. “My goal was to start a conversation,” he has told THR of the 2019 gown. Indeed he did.

At the 2019 Emmys, Porter shined in a Michael Kors suit with a casual 130,000 crystals and $55,000 of diamonds. “This is pretty striking in a different way that just exudes class,” Ratelle told THR.

At the 2020 Globes, the pair wowed with a white feathered tuxedo featuring 4,000 crystals and $2 million of diamonds, including a 40-carat Tiffany & Co. necklace. Designer Alex Vinash and team took 465 hours to craft the ensemble.

Then for the Grammys this year, he debuted the meme-able remote-controlled hat. It was paired with a “disco fantasy jumpsuit” by Baja East and custom Coach boots encrusted with over 9,000 crystals. 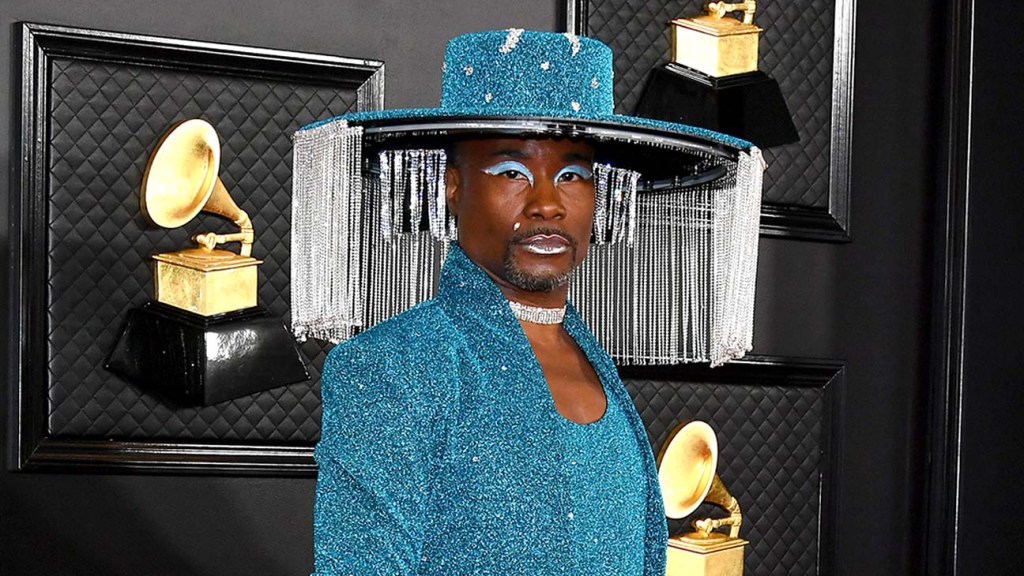 His fashion choices are significant in that they defy what is traditionally labeled as menswear and womenswear on the red carpet. “We want to keep challenging the notion of what it means to dress like a man or a woman,” Ratelle has told THR.

Porter has explained that sometimes it means that certain designers don’t want to work with him: “We really want to work with the people who understand our vision first. Some designers feel that’s not their aesthetic [or] the conversation they’re ready to have yet, but the world is ready to have it! I am proof positive that the conversation is necessary.”

From The Blonds’ gilded pharaoh look at the Met Gala to the pink-caped Randi Rahm suit for the 2019 Globes, Porter wins the fashion game every time.