In collaboration with his fashion stylist, Sam Ratelle, the best actor nominee for his role in Pose brought plenty of promised drama to the red carpet at the 77th Golden Globes on Sunday — in the form of a white feather-bedecked tuxedo look embellished with 4,000 Swarovski crystals, complete with a six-foot train that zips off.

“This is not a sitting oufit; this is a standing outfit!” Porter said on the red carpet. As for the color, Porter said, “The world has gone absolutely mad and, when we started to think about what I would wear today, the first appearance of the new decade, we decided to go all white. The color symbolizes peace, hope and new beginnings.”

The tux was styled with a $2 million, 40-carat diamond pendant necklace by Tiffany & Company. And the duo shared all the details in advance, exclusively with The Hollywood Reporter, of the look that took over three months and 465 hours to make.

“It’s interesting that people now always expect Billy to be in a dress, so we’re having a lot of fun figuring out how we can make menswear absolutely fabulous and just as fantastic and opulent as womenswear,” Ratelle told THR on New Year’s Eve, when Porter stepped out in his first looks of 2020 — four new takes on the tuxedo.

Today Porter took that concept one step further, coming full circle from the boundary-pushing velvet and silk tuxedo ball gown, jacket and bow tie by fashion designer Christian Siriano that lit up social media when he stepped out last February at the Oscars. 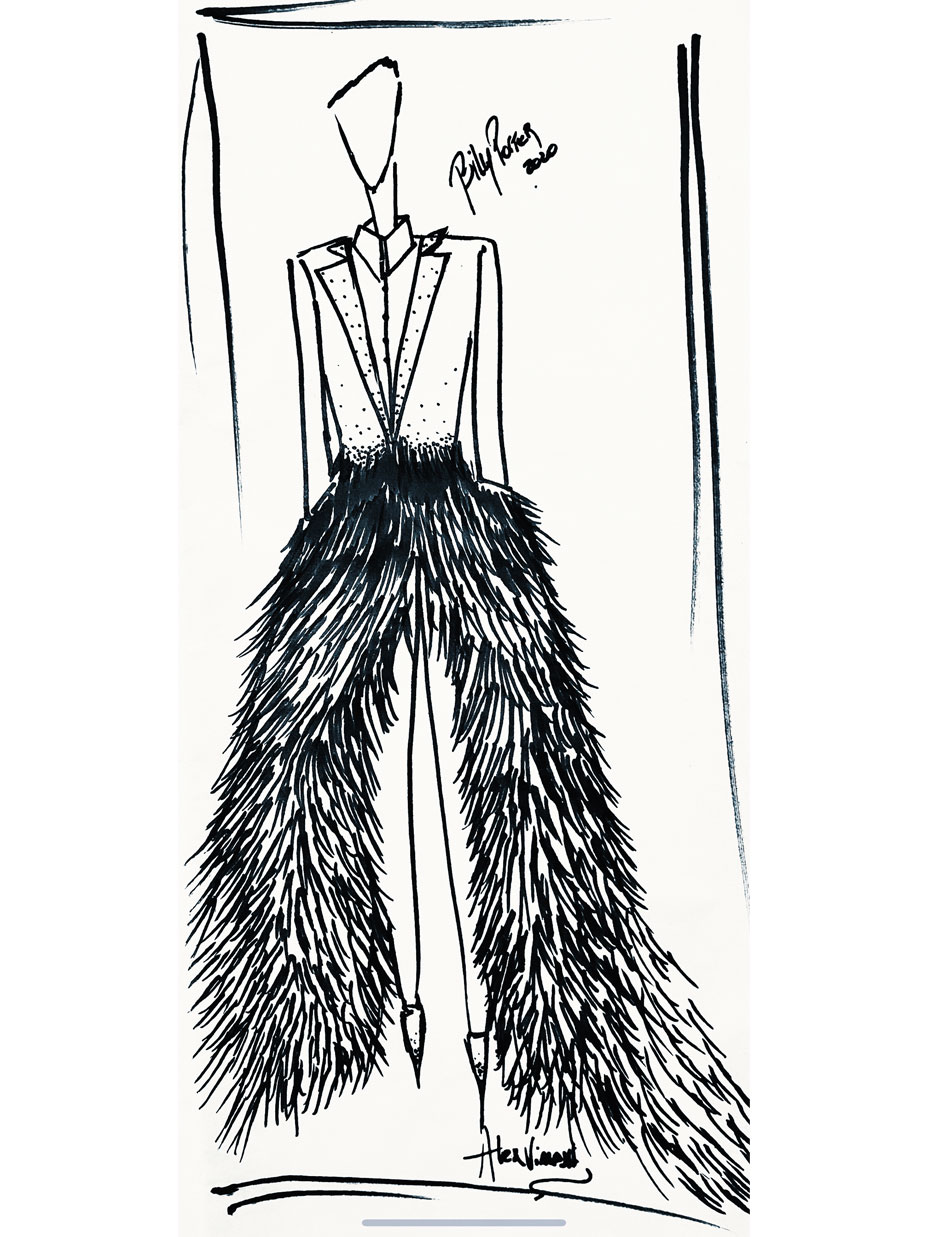 “All of his accessories are encrusted in Swarovski crystals!” Ratelle told THR, from satin shoes custom-made by Sandra Choi for Jimmy Choo, Mercura eyewear, and a mirrored metal Emm Kuo cigarette-box handbag with a crystal-covered chain handle. 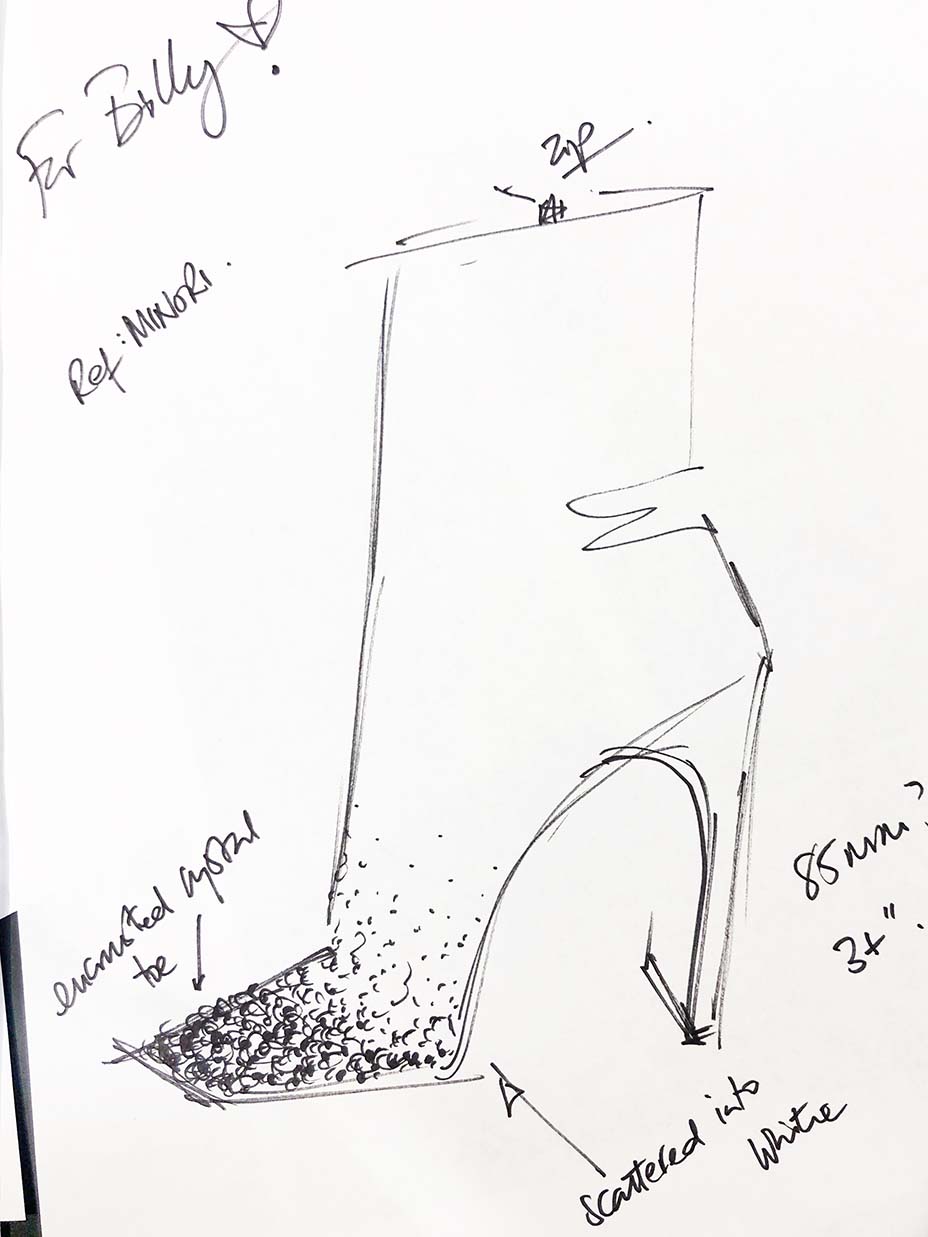 Other Tiffany & Co. jewels include several diamond rings and a $46,500 dragonfly brooch. “It’s very special to us because of its meaning,” said Ratelle pointing to the dragonfly’s symbolism of “change, transformation, adaptability and self-realization.”

Porter is also decked out in $55,000 of diamond bangle bracelets and multiple diamond rings (all by Tiffany & Co.), including a $11,000 diamond pinky ring shaped like a disco ball, in an ode to his new “disco era.” 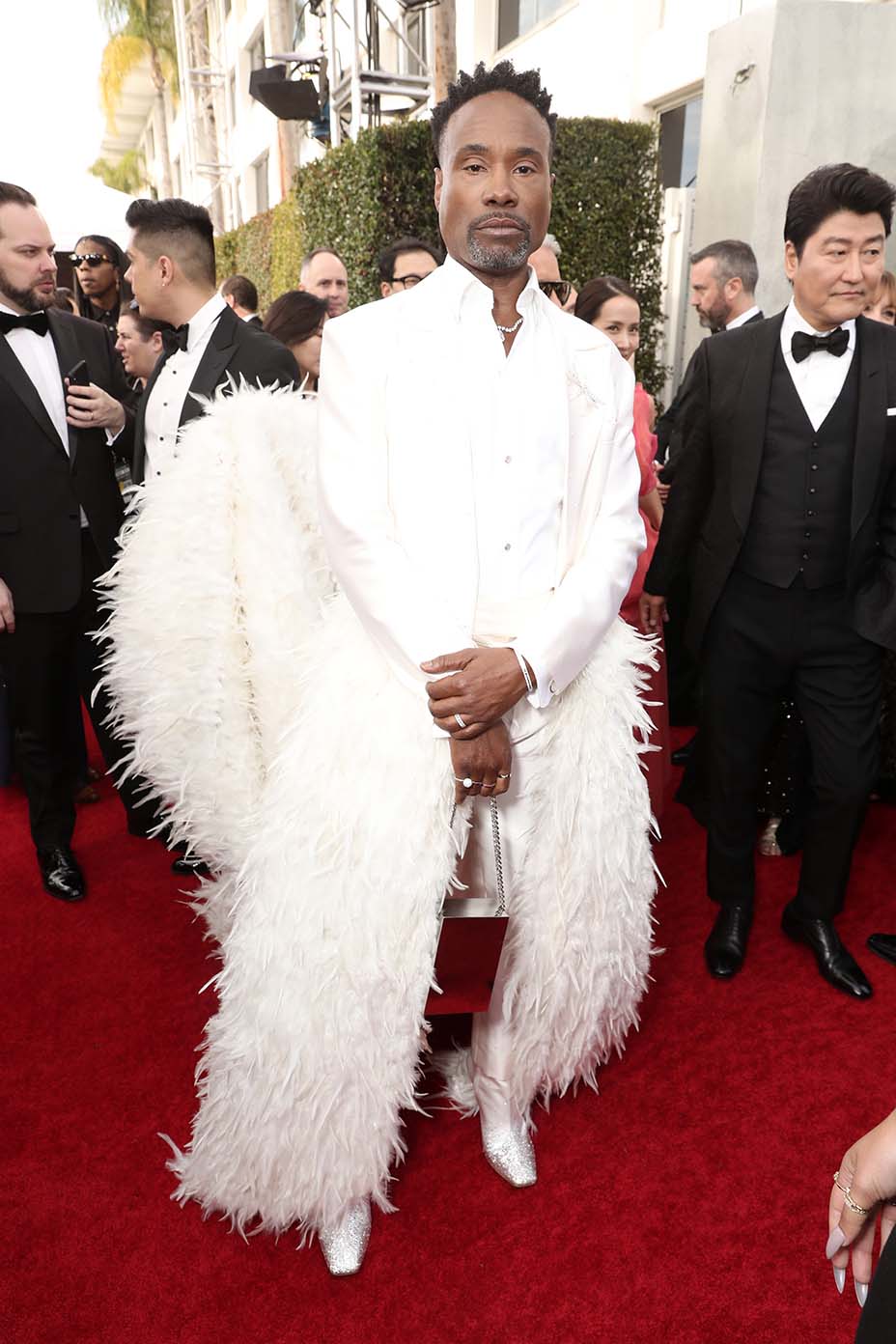 Porter notably wore his tuxedo sans tie. Ratelle said: “If you don’t wear a tie, we have to wear diamonds! So the necklace is worn inside the shirt as the form of his neckpiece, which is a new take. We approached this to be more masculine, but it’s also very rock ‘n’ roll. He wants to feel like a rock star! “

Added Ratelle: “It’s also a regal look. There’s no monarchy here in the United States but it’s one of the most opulent and high-profile televised events in the world, so you have to show off in a certain way!” 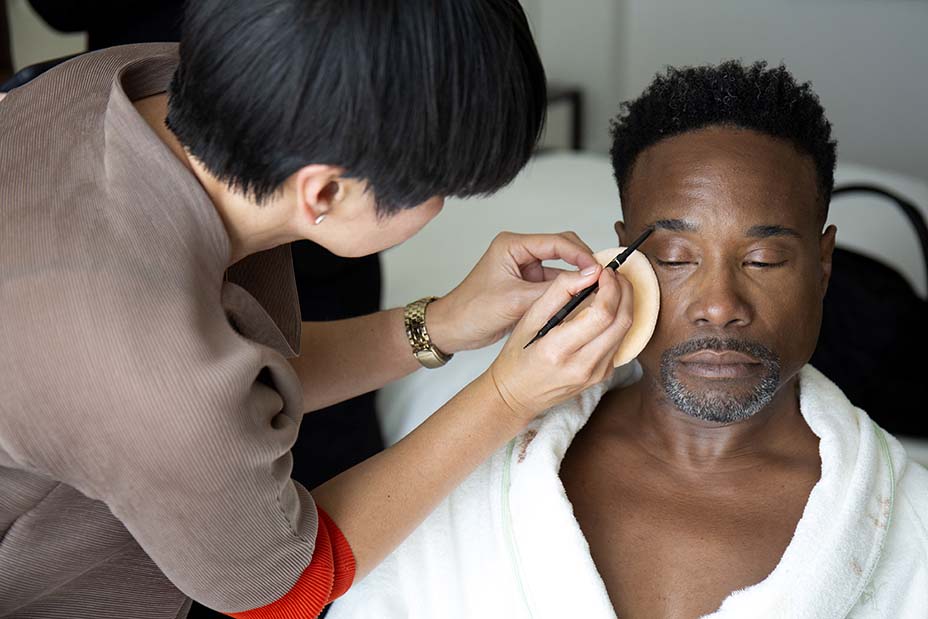 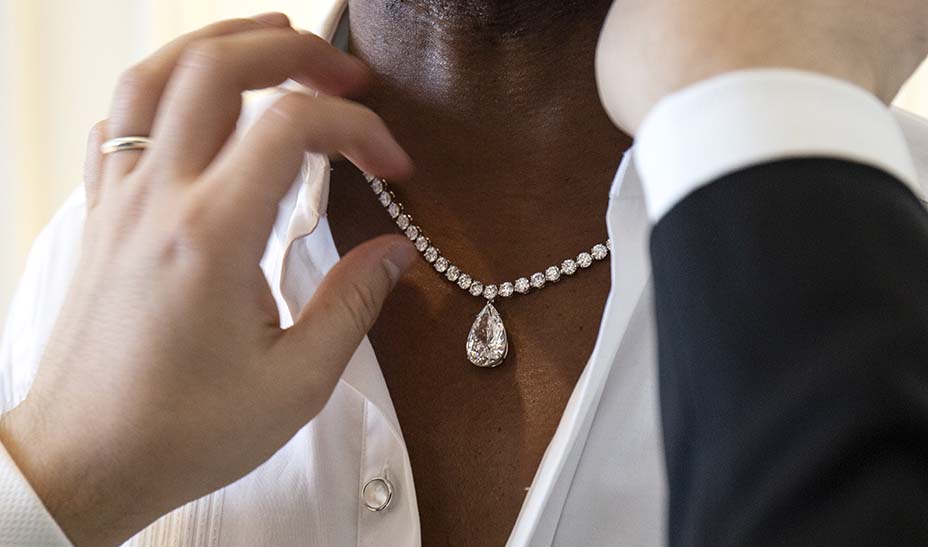 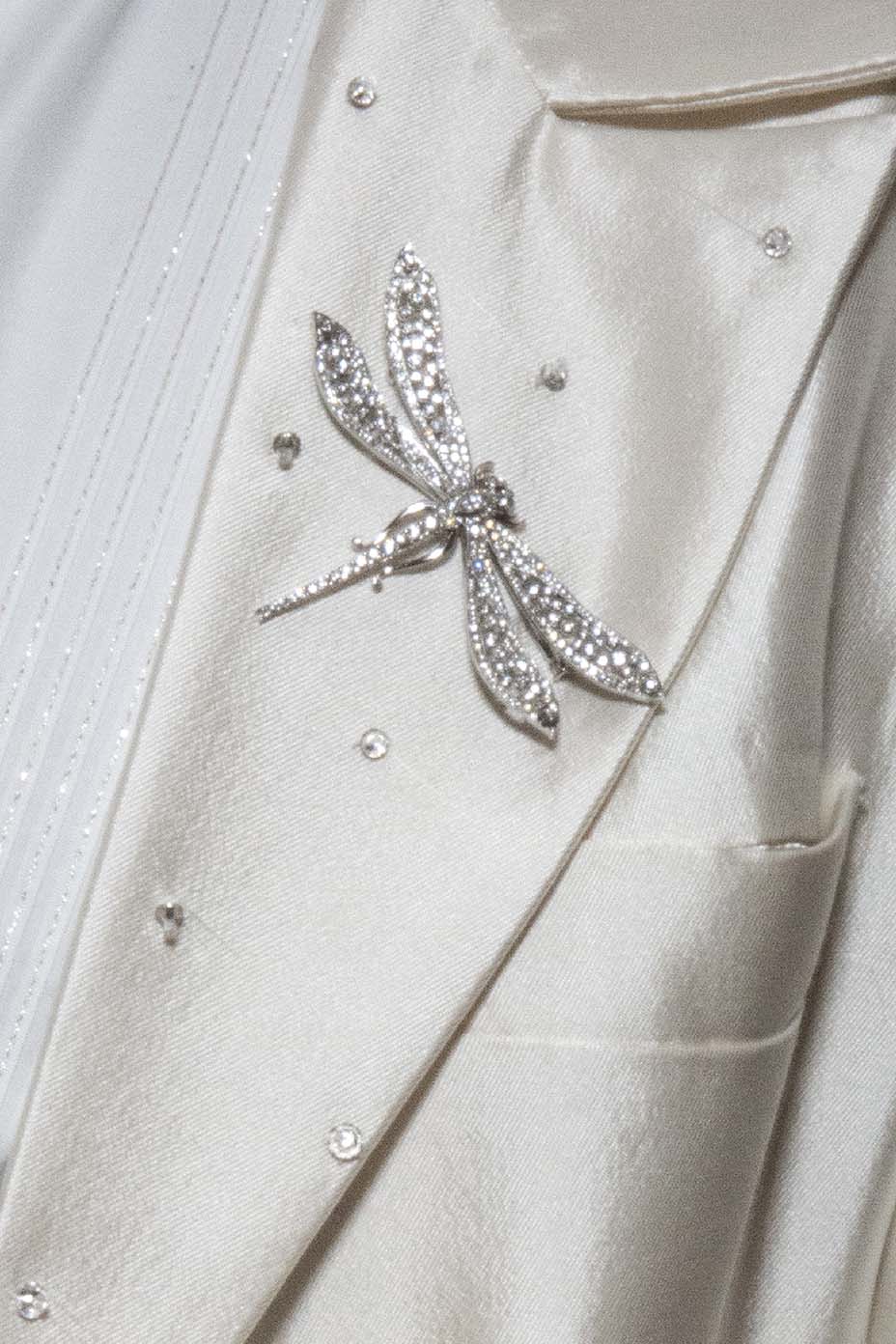 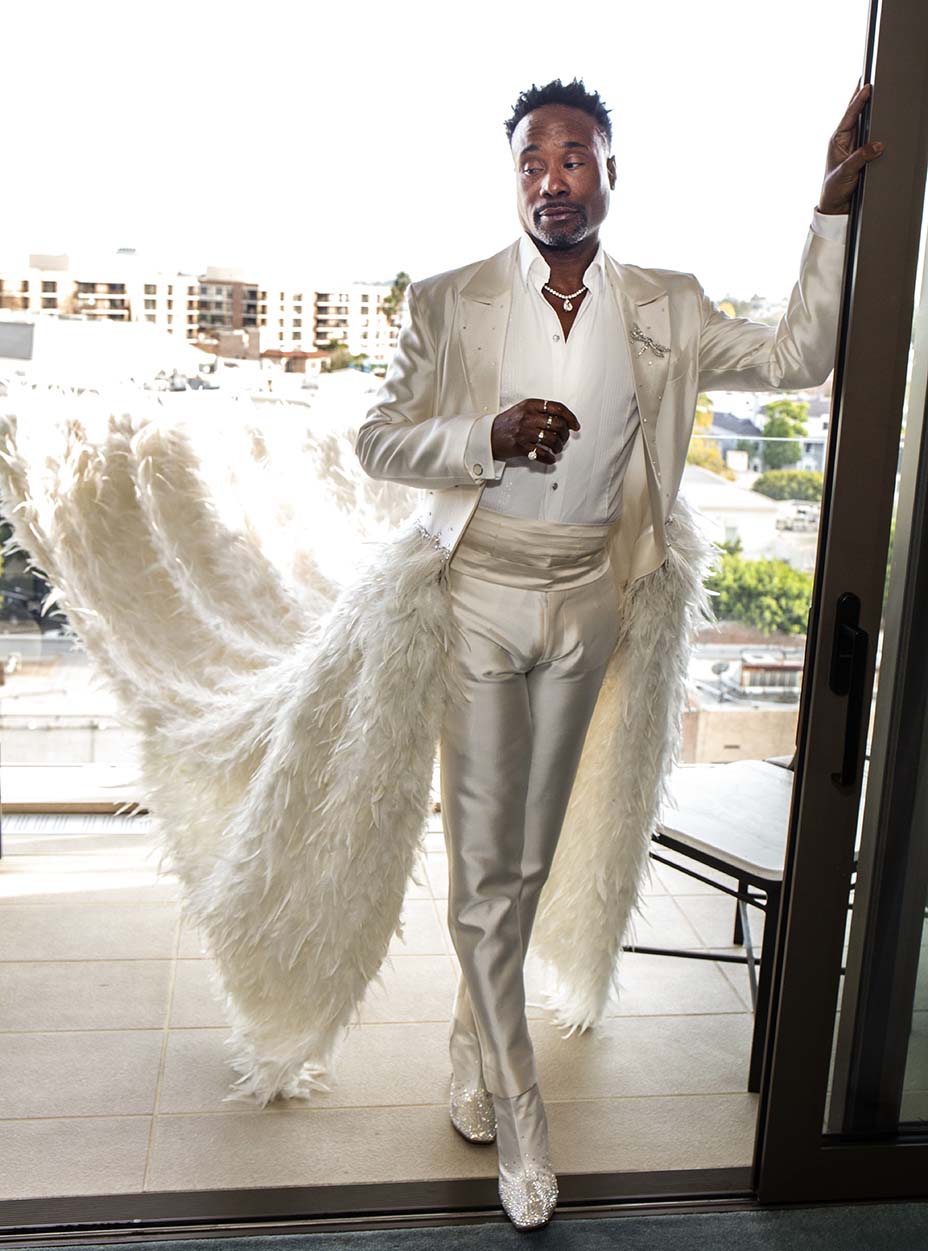