Some directors are drawn to a project because of its script. But for Susanne Bier, helmer of Netflix’s Bird Box, it came down to a singular image: a blindfolded woman gripping two kids in an unimaginably hostile environment — postapocalyptic America.

The film, which stars John Malkovich, BD Wong, Lil Rel Howery, Jacki Weaver and Sarah Paulson, follows Sandra Bullock’s Malorie, a reluctant mother, as she attempts to keep herself and two children safe after a mysterious, invisible being — one that causes people to kill themselves seemingly for no reason — plagues the world.

Ahead of Bird Box‘s world premiere at the 32nd AFI Fest on Nov. 12 (the film will have a limited theatrical run starting Dec. 13 and hit Netflix on Dec. 21), Bier, 58, discusses the effectiveness of an unseen foe in a thriller, why a theatrical release was needed, and why it’s so important to show a different kind of mother and woman onscreen.

The book is more horror, but the film is firmly in the thriller realm. Was that intentional?

Absolutely. When I talked to the producers, I said, “Look, I cannot do horror.” I’m much more interested in suspense and thrillers than horror. I like things that are threatening but not gory. I don’t know how you define the difference, but I was really clear about making a thriller.

Let’s talk about the end of the world. Is this how you could imagine it playing out?

I was thinking about things that instigate the end of the world ­— which is this thing that when you look at it, it messes with your mind, it looks into your worst fear. In other apocalyptic movies, it’s very much about a natural disaster, but this is within yourself. I thought that that was frightening and interesting. It’s a personal thing. It’s different for you than it is for me — it’s tailor-made fright and I thought that was irresistible. 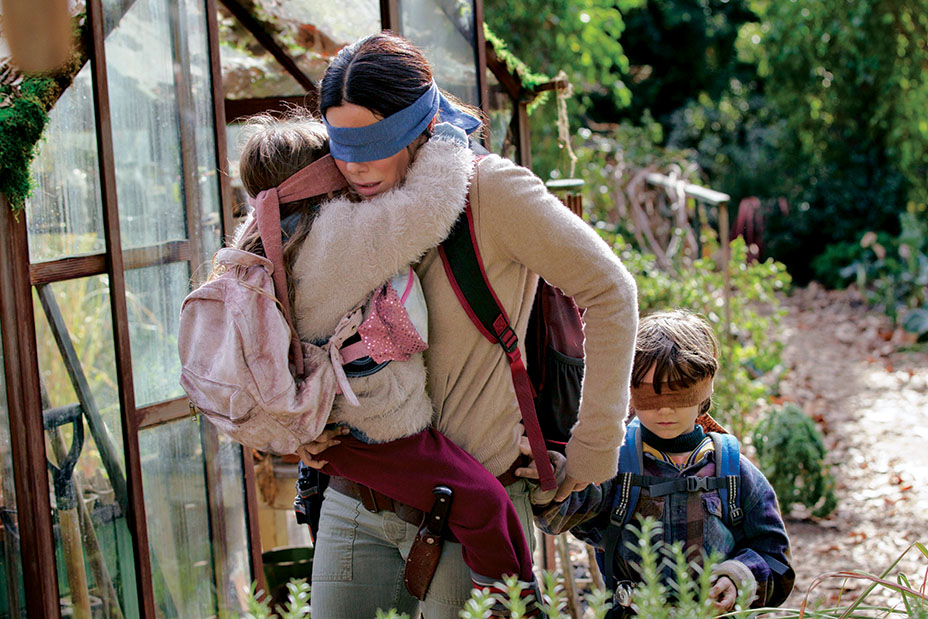 Were there ever any discussions to show the creatures?

There were lots of discussions. Everybody involved at some point got a little soft and said, “Don’t we have to show it?” But I very strongly felt that you couldn’t do it. How are you going to picture someone’s biggest fear? And also, the unseen allows for you as an audience to make your own images while watching.

There were several moments in the film when Malorie could have been softened, but the film doesn’t go there. Was this a choice that you and Sandra consciously made?

Oh yes, we discussed it a lot. This is a woman who feels reluctant about motherhood, who doesn’t feel comfortable with it. But she’s also so elemental about survival, she’s got that razor-sharp point of view. In that space, there isn’t really any room for the kind of love that she’s got inside her but isn’t going to let out. We did discuss: How far do you go before you really start disliking Malorie? You don’t turn away from her because you get why she does what she does, even if you would have done it differently. I think there are a lot of women who can relate to that but because it’s something that’s tricky to portray, a lot of movies don’t really go there.

Did real-world conflicts inform any of your filmmaking decisions?

I am a director who is very much so in the realm of the real world and I do follow news, but I digest it and chew it and it comes out in a less concrete way in my projects. I do find the film very timely. I think at this point in time there is a sense of a dystopia.

Why tell this story now?

Netflix announced that it would release your film in theaters ahead of its streaming debut, which is a break from its traditional model. Was that something you fought for?

I wanted them to do it, but [Netflix film chief] Scott Stuber is great at navigating the new [film] system and the old system, so it wasn’t anything that I had to convince him about. But it was something that we had conversations about. I was very pleased with it. You know, these are two worlds that need to collide and appreciate the symmetry between them, and I think this is the beginning of something that can be really interesting for both parts.