The tragedy and family drama at the heart of Image Comics’ new series Bitter Root may be the most traditional thing about a comic that is, at heart, anything but traditional. Written by David F. Walker and Chuck Brown, with art by Sanford Greene, Bitter Root centers around the Sangeyre family, the latest in a long lineage of monster hunters who may be the last thing standing between humanity and supernatural apocalypse.

The series takes place in Harlem in the 1920s, as the Harlem Renaissance is happening. The Sangeryes find themselves dealing with racism, familial expectations and their own shortcomings, as well as monstrous problems going bump in the night. The Hollywood Reporter spoke to Brown and Walker about the series.

The first issue hits the ground running and doesn’t feel like a first issue, in that the kinks have all been worked out already and everyone is at full speed from the very first page; it all just works, immediately. Is this the result of everyone involved having previously worked together, as with David and Sanford having previously done Power Man and Iron Fist for Marvel?

David F. Walker: It was a combination of Chuck and I really putting our heads together, and both of us having worked with Sanford. As a team, we’ve spent a lot of time putting this together — bouncing ideas back and forth, arguing a bit and really talking about what it is that we would like to see as fans. Each of us has been open to the evolution of the story, and everything we do is in service to the characters and the world they live in.

Chuck Brown: It took several drafts until we found just the right flow. David and I spent a lot of time on the phone discussing these characters and their journey.

There’s so much going on in this book, from the setting — Harlem in the ’20s, right in the middle of the Renaissance! — to the parallels with certain contemporary situations, with the cops in the final set piece of the issue. Comics increasingly have one shot with the reader in a crowded marketplace, and indie comics especially; was that something that played on your minds as you created this first issue?

Walker: That was definitely on my mind. I approach the first issue of everything as being the only chance to win over the audience. It is all about finding the right balance of giving the reader enough to want more without giving away everything all at once.

Brown: We wanted to give the reader what they paid for: an action-packed comic that didn’t leave them hanging but drew them into our world and left them wanting more.

Backtracking for a second: What was the initial root (no pun intended) of Bitter Root? Where did it get started?

Walker: It really started with an idea that Chuck had, which he and Sanford spent some time developing.

Brown: The idea was sparked during a barbershop discussion. The topic was barbers who used to also do minor surgery in the ’20’s. From there, the idea just snowballed into monster hunters during the Renaissance. Sanford fell in love with the idea, and before I knew it, there were these awesome character designs.

Walker: They brought me in a little later, and then Chuck and I began to really build this thing up, taking the initial idea and crafting it into a story.

Brown: When David came on board, he took the story to heights I could have never imagined. David gave Bitter Root depth and social relevance.

Let’s talk about that depth a bit more. There are all kinds of influences at play in Bitter Root, from all manner of places. What are some of the less obvious ones that you can share?

Walker: I’m a student of early black cinema and filmmakers like Oscar Micheaux, who made movies at a time when segregation was the law of the land and Hollywood had very little desire to entertain black audiences. I love how filmmakers like Michaeux and Noble Johnson and Spencer Williams crafted their own cinematic mythology at a time when Hollywood didn’t care. For me, there is a bit of the spirit of Micheaux in Bitter Root, this notion of creating an entertaining world that is familiar but also different — that draws from aspects of the black experience in America while crafting a universally human story.

Brown: In some of my work I focus on the trauma that character experiences that leads him or her down the road of villainy or heroism. The trauma of slavery and domestic terrorism plays a big role in the origin of our villain in Bitter Root.

Walker: I was also inspired by the films of Hammer Studios, which really reinvigorated the monster movie in the late 1950s. I watched a ton of monster movies when I was a kid in the 1970s, and I loved all the classic Universal stuff, but Hammer just kind of blew my mind. Bitter Root is my love letter to the pioneers of black cinema and to monster movies.

One of the things I really appreciated about the first issue is the way in which the book plays with expectations — characters play against type while still working within familiar frameworks. We know what a family business in genre surroundings looks like, even if this family is different in its specifics; we know Blink’s situation, because we’re familiar with stories about heroes being underestimated and having to overcome that, but her situation isn’t exactly the one we’re used to, because it’s familiar expectations she’s having to overcome, and so on. How aware were you of the spaces you’re working within with Bitter Root and the expectations that come with them?

Brown: We knew we wanted to create something familiar but new. For example, Blink is a powerful and capable warrior, but she’s still confined to the roles of a woman during the 1920s.

Walker: When I came on board to Bitter Root, I asked Chuck and Sanford about all of the characters. Who is this? Why are they doing what they are doing? What can we expect of them? What is unexpected? And then I said, “Let’s have fun with them. We haven’t seen a lot of characters like this in comics, so let’s not always go down the obvious route.”

I especially felt this way about the character of Blink and Ma Etta, the two female leads. I blame this on both Kelly Sue DeConnick and Chelsea Cain, both friends of mine, and both incredible writers who have opened my mind to how I think about characters, especially female characters. I’m not ashamed to admit that I find most male leads to be boring these days. For me, the real challenge — and the real reward — is writing a strong female character and not just having it be some kind of lazy gender swap.

What’s the takeaway you hope readers have from the first issue? What would you want to be the hook to bring people back for second, third and future helpings?

Walker: The most important thing is that readers are entertained and feel some kind of connection with the characters. For me, this story is about a broken family dealing with traumatic loss, and they must heal the wounds of the past in order to save the world. As the story moves forward, Blink will have her true moment in the spotlight. And as we explore the family’s past, Ma Etta is going to be the most interesting character anyone has ever seen. Spoiler alert: Ma Etta was a member of the Underground Railroad and has connections to the Haitian Revolution.

Brown: I want people to have fun and get sucked into this crazy Bitter Root universe. I want them to see themselves and relate to these amazing characters. If I can enlighten or make at least one person’s day better with Bitter Root No. 1, then my job is done. 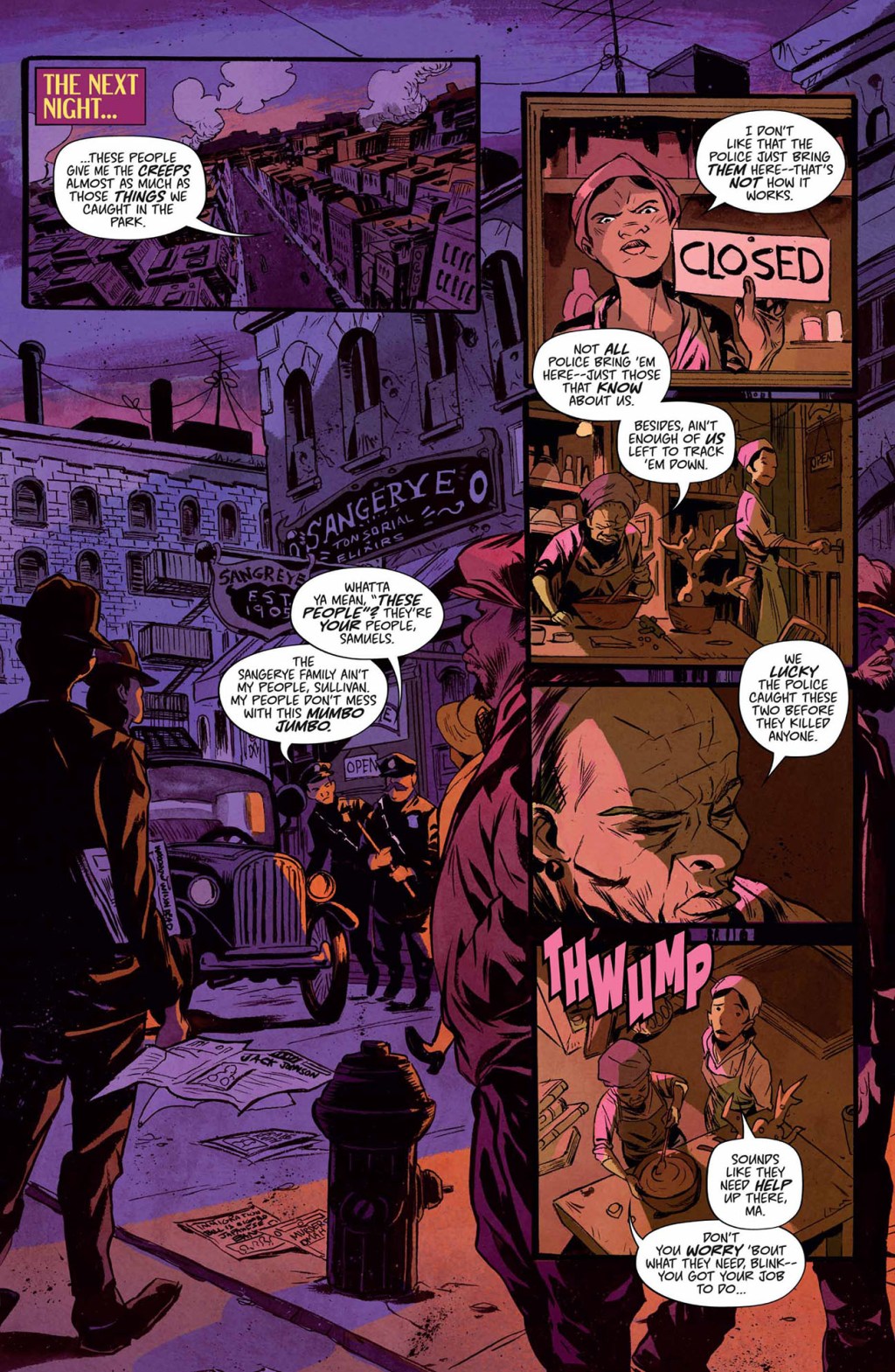 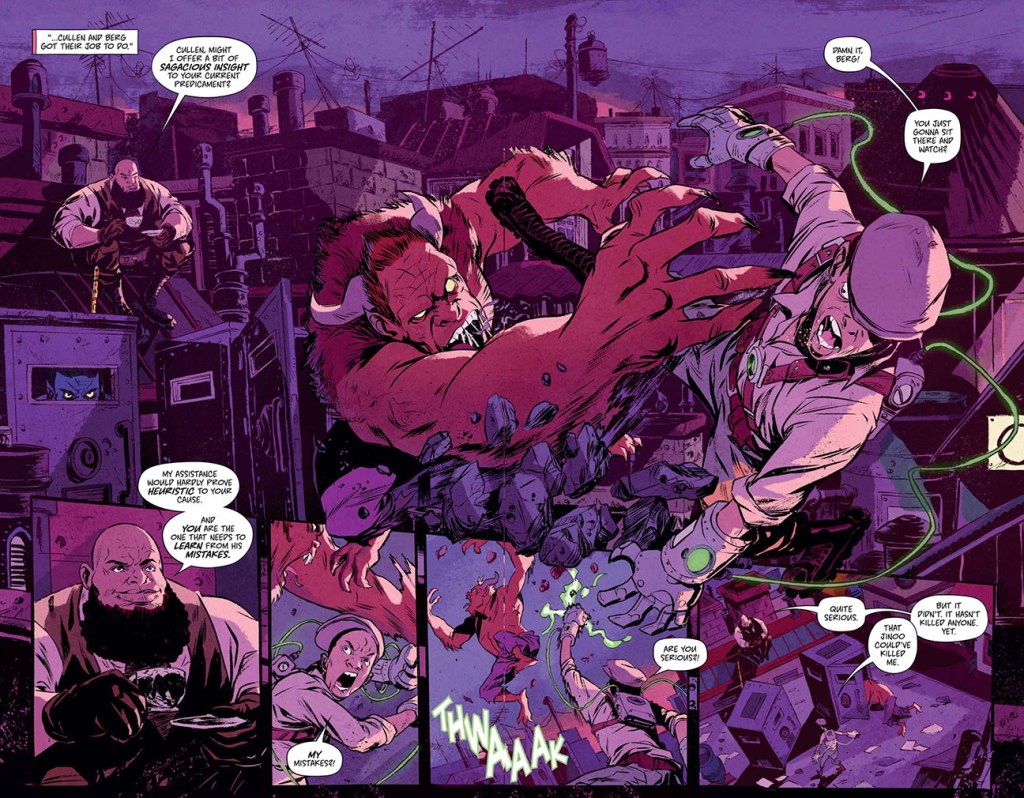 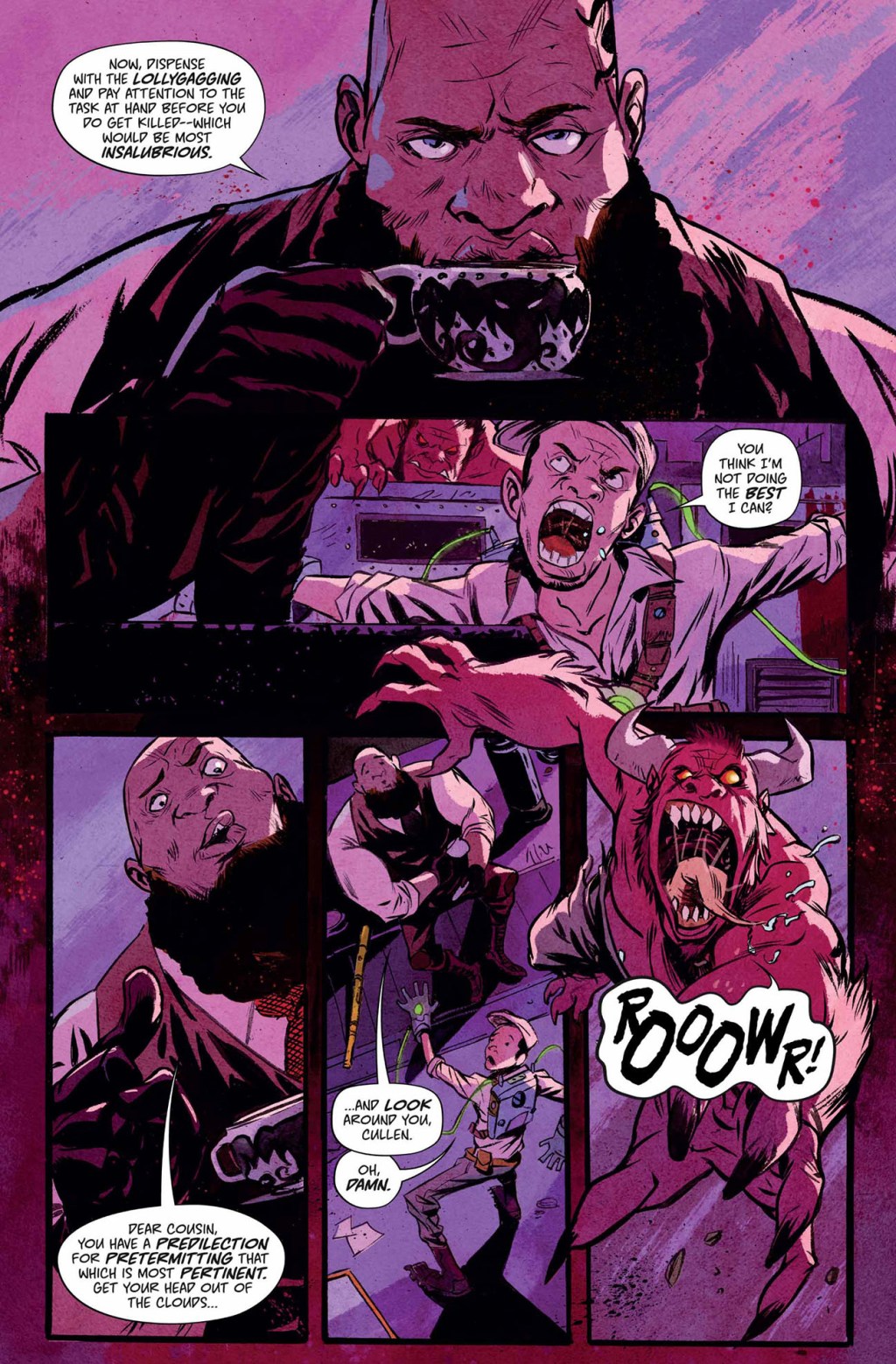