Universes will collide on Wednesday, when DC’s greatest superheroes find themselves facing a threat shared with the inhabitants of Black Hammer Farm — a mysterious man who will turn two worlds upside down. Sound like a crisis on multiple Earths? It is — and it’s also the plot of Black Hammer/Justice League, a new comic book series by Jeff Lemire and Michael Walsh launching this week.

The five-issue project is just the latest in a series of big moves for Lemire’s superhero epic Black Hammer, which he co-created with Dean Ormston for an initial comic book series in 2016. Since then, it’s been nominated for Eisner Awards for the past three years and spawned multiple comic book spinoffs, including Doctor Star and the Kingdom of Lost Tomorrows and The Quantum Age. Last year, Legendary announced plans to adapt the property for both movie and television projects.

Heat Vision talked to Lemire and Walsh about the new series, and what it’s like to compare some of the newest superheroes in comics to some of the originals.

Jeff, there’s something so perfectly fitting about the concept of Black Hammer crossing over with the DC Universe that it seems strange to ask where the idea of the series came from, but I’m curious: At what point did you start to want to pull Black Hammer into a crossover with another publisher’s characters? And why the Justice League, in particular?

LEMIRE: DC reached out to Dark Horse originally with the idea. It wasn’t really even on my radar, but as soon as I heard about it, I jumped at the chance. I grew up a big DC fan and, of course, I have also written extensively for DC as well, so this just seemed like way too much fun to pass up.

In terms of the Justice League, they offered the chance to use the most iconic of the DC characters in the story, and if I get one chance to crossover Black Hammer with DC, I definitely wanted to see DC’s big guns in the story.

I feel as if Black Hammer/Justice League will offer both properties a chance to show how different they are, despite the similarities and inspiration Black Hammer draws from archetypes the Justice League helped cement, if not outright invent.

LEMIRE: You’re absolutely right. If anything, I found that having these two worlds, and these two casts of characters, meeting really shone a light on the differences between the Black Hammer characters and the DC characters. Of course, there are some surface similarities, like both Martian Manhunter and Barbalien being Martian heroes, but when you put them together, it allows the uniqueness of both worlds to really come through.

Something that Black Hammer has always done is focus on the character and the emotional story behind the story, if that makes sense — that’s the kind of thing that can get lost in a superhero crossover and, really, might not even be what readers want from that kind of story. Is it difficult to balance the Black Hammer of it all with the demands of something like this series?

LEMIRE: Not really. This book should be, above all else, fun. That doesn’t mean there can’t be heart and emotion in it, but you can’t lose sight of what this is: a chance to really create something that readers will enjoy reading. So, I didn’t set out to tell a really emotionally charged story like I did with something like Doctor Andromeda; this book is meant to be a big, fun crossover, but with that Black Hammer twist.

Michael, you’ve worked on projects as disparate as the Last Jedi comic adaptation, the amazing JJJ issue of Peter Parker: The Spectacular Spider-Man and Ales Kot’s Zero. I think of you as someone who can handle the iconic, the character-driven and the humorous, all of which feels necessary for a project like this. When you signed up, did you have any idea what you were getting yourself into?

WALSH: I had no idea what to expect. When Daniel approached me about the project, I was actually on vacation after just having wrapped The Last Jedi. I had just turned down a few offers that didn’t feel right at the time and said to my partner, “I really need to figure out my next gig.” Minutes later, my phone dinged, and it was an email detailing the project. Three key phrases — Jeff Lemire, Justice League and Black Hammer — instigated an instant green light from me.

I honestly came into the book with no expectations of how the story would work, and it’s been more fun than I could have imagined. I had no idea the scope of the story and the lasting effects on both worlds.

Is there a different mindset for drawing the Justice League versus the inhabitants of Black Hammer Farm and those around them? Do you approach the two universes similarly, or find some way to differentiate them?

WALSH: Yes, especially early on. I went with a much more saturated palette in Metropolis than the farm and even worked on more dynamic storytelling when showing off the League. As the worlds change, the storytelling shifts as well. I was very conscious of how I was depicting not only the characters but the worlds they exist in and how they are affected by them.

With the entire DC Universe to choose from, are there any surprising characters fans should expect to see? And who was the most fun to work with in this series, in terms of DC characters?

LEMIRE: For me, the most fun to write was actually Batman. Seeing him thrown into the Black Hammer universe was a blast, and I really enjoyed his journey in the series, Cyborg is also a favorite. As I said before, I wanted to use the most iconic characters here, but there are a couple of surprises, too. If we get to do another one, I may dig deeper into some of DC’s more obscure properties.

WALSH: There are a bunch of really fun appearances, but as for the ones I can talk about … I’d have to say, maybe, The Flash has been the most fun — and challenging. He’s such a dynamic character, not only in his posing but also his personality and the way he moves throughout the world. I had a lot of fun capturing his kinetic nature and Speed Force abilities. Ask me again after the series is done and I might have a few more unexpected answers! As for the Black Hammer characters, I really enjoy drawing Colonel Weird. The way he constantly phases in and out of reality while floating around makes him very visually interesting.

This is the first time you’ve worked together, unless I’m mistaken. I can imagine both of you playing to each others’ strengths, which makes me wonder how the experience was for the two of you. Could you imagine collaborating more moving forward?

WALSH: Yes! Working with Jeff has been a dream. He’s one of the creators that I really admired as a role model when I was finishing college and deciding to push for a career in comics. As an artist himself, he has a great sense for exactly what can fit comfortably on a page and how to play to each page turn with great effect.

LEMIRE: I love Michael. I have been a big fan of his since his work on X-Files a few years back, and he lives very close to me, so it seemed like a natural fit to work with him. I’ve loved the experience, and we are already talking about potential future projects together, both Black Hammer-related and otherwise.

Finally, I have to ask: Audiences in terms of both comics and now movies are familiar with stories in which reality is threatened, and the trope that it takes an unlikely collection of heroes coming together to save the day. Is Black Hammer/Justice League a celebration of this kind of story, a twist on that idea, or both?

LEMIRE: It’s both. With all Black Hammer books, I am always very aware of the tropes and expectations of any given superhero story, and I attempt to both embrace and celebrate those, but also twist them and make them feel fresh, and I attempted to do that here. I wanted to really celebrate the legacy of great Justice League crossovers, but also put a Black Hammer spin on it as well.

WALSH: I think Black Hammer/Justice League reverently plays with the tropes but definitely retains the voice and strong character work of Jeff and Dean’s Black Hammer universe. It really does feel like something special. 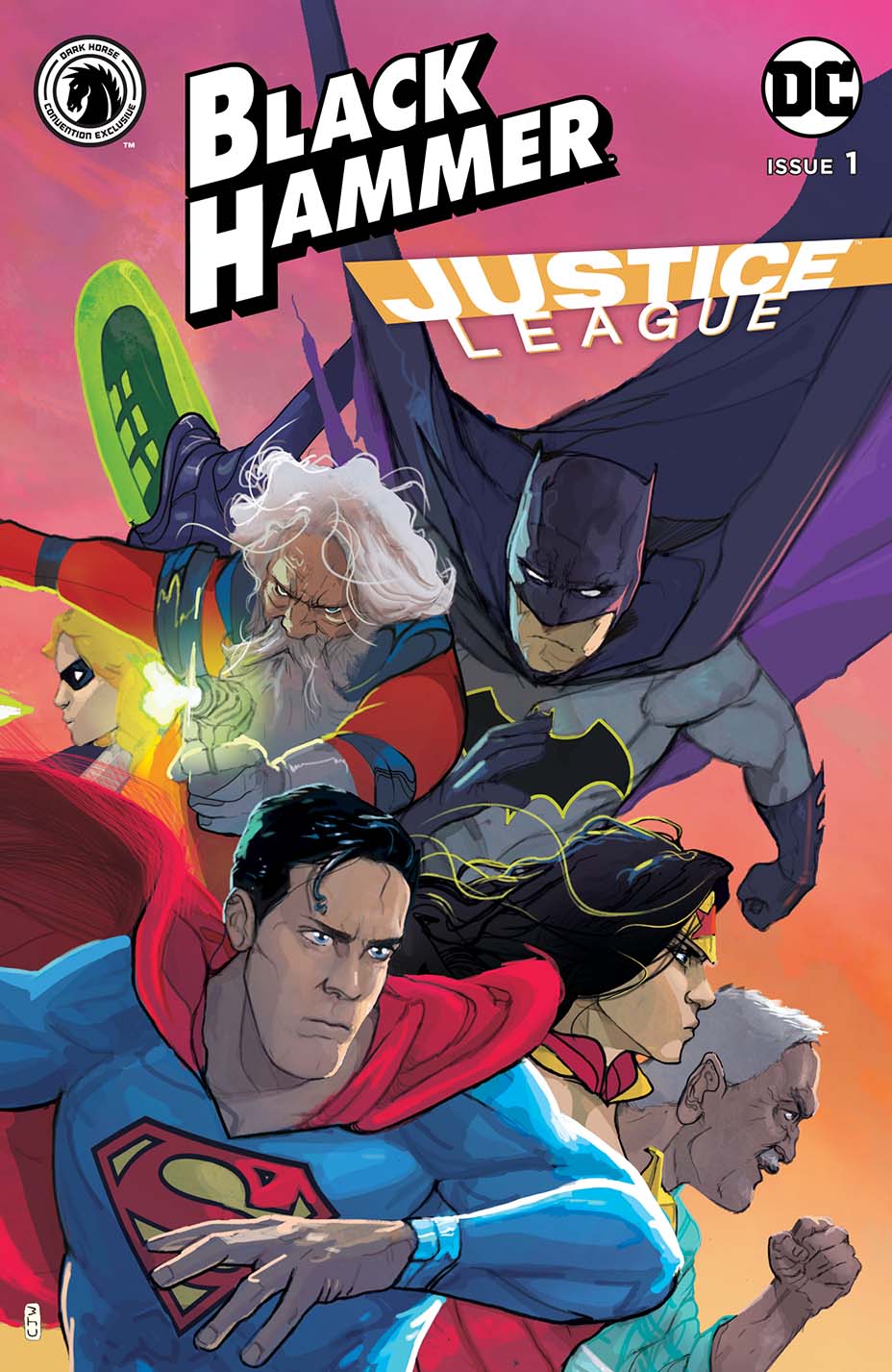 Black Hammer/Justice League No. 1 is set to bow Wednesday in comic book stores. Above, an exclusive variant cover to the issue by Christian Ward, which will debut at San Diego Comic-Con (available from the Dark Horse booth) and retail for $10.