All eyes are on Black Panther this weekend, and with good reason. The film is Marvel Studios’ best-reviewed film ever and is poised to be a big hit. It has fans are already asking, what’s next for T’Challa?

While Ryan Coogler’s Black Panther features Chadwick Boseman as a hero learning to accept his position in Wakanda and the world, the journey was neither as brief nor as straightforward for the comic book incarnation of the character. In fact, the original incarnation of T’Challa has demonstrated, on more than once occasion, that he’d rather be anyone else than the ruler of the most advanced nation on the planet.

Here’s a look at some of the strangest comic book identities T’Challa has adopted — and that certainly won’t help inspire a Black Panther sequel.

Luke Charles
After appearing in Fantastic Four and Captain America, the powers-that-be at Marvel in 1968 felt as if it was time to give the Black Panther the chance to build an audience by appearing on a regular basis, as a member of the Avengers. (After a cameo in Avengers No. 51, he joined the team in the following issue.) There was only one problem: the Avengers were based in New York City, which isn’t exactly local to T’Challa’s base of operations in Wakanda. The solution was clear: T’Challa abandoned his kingdom for the U.S., for the good of the world.

That wasn’t even subtext; at one point during the Black Panther’s initial tenure with the team, they journey back to Wakanda, where the Vision thinks, “So this is T’Challa’s kingdom — which he left to serve the whole of humanity!” Internal monologues would try and explain away his decision, as in 1968’s Avengers No. 57, where the Panther thinks to himself, “I was a Prince in far-off Africa — of a hidden kingdom possessed of matchless wealth! But, I found my throne an empty, hollow mockery…!” Far better, then, to be a superhero in the U.S. — but, he went on to tease, there was sure there was more he could do…

What that more was wouldn’t be revealed until 1970, and Avengers No. 77, where T’Challa revealed to his teammates, out of the blue, that he was now a high school teacher called Luke Charles. Unexpected? Well, yes, but T’Challa did his best to pretend that all of this made perfect sense, explaining that he’d been taught in the best schools in the west and was all prepared for this eventuality all along. “How foresighted of my uncle… to see that I have a legal American name as well as my tribal one!” he exclaimed. “For, who can who what destiny may hold in store for the heir of the Black Panther throne?”

Other than, you know, actually claiming your throne and ruling your country, of course. Eventually, T’Challa abandoned the Luke Charles identity and returned to Wakanda… but that didn’t mean he would go back to being the Black Panther, as it turned out.

The Black Leopard
A little less than a year after the Panther had left the cast of Avengers, he re-appeared in the pages of the Fantastic Four series with 1972’s No. 119, teaming up with the Thing and the Human Torch against Wakanda’s racist neighbor Rudyarda, which supported segregation. Unusually, T’Challa isn’t the Black Panther in this story — instead, he declares himself to be “The Black Leopard!” in the middle of a fight sequence, and explained the name-change away in a later exchange: “I contemplate a return to your country, Ben Grimm, where [the Black Panther name] has — political connotations. I neither condemn nor condone those who have taken up the name — but T’Challa is a law until himself. Hence, the new name — a minor point, at best, since the panther is a leopard.”

It’s unclear whether the name change was an editorial edict or simply writer Roy Thomas feeling nervous about Marvel being seen as connected to Bobby Seale and Huey Newton’s real-world organization. (Contrary to popular belief, Marvel’s Black Panther and the Black Panther Party both adopted the name separately, but almost simultaneously; the character’s debut in Fantastic Four No. 52 came just months before the B.P.P. was founded.) Nevertheless, T’Challa didn’t stick to the new name long. Under the guidance of writer Steve Englehart, he’d re-join the Avengers in Avengers No. 105 just nine months later, and return to the Black Panther name again.

“I did not want my personal goals and tribal heritage confused with political plans made by others,” he explained when asked about the double name change. “But in the final analysis, I decided that made as much sense as altering the Scarlet Witch’s name — because witches are generally thought of as ugly. I am not a stereotype. I am myself. And I am — the Black Panther!”

So now we know.

The King of Hell’s Kitchen
This appeared to be the end of T’Challa’s identity crisis, but a 2010 storyline would return to quite how fragile his sense of self could be. Following an international incident that saw Wakanda invaded by Doctor Doom, T’Challa abandoned his country once again to become Mr. Okonkwo, the manager and cook at a diner in New York City that happened to literally be called Hell’s Kitchen. 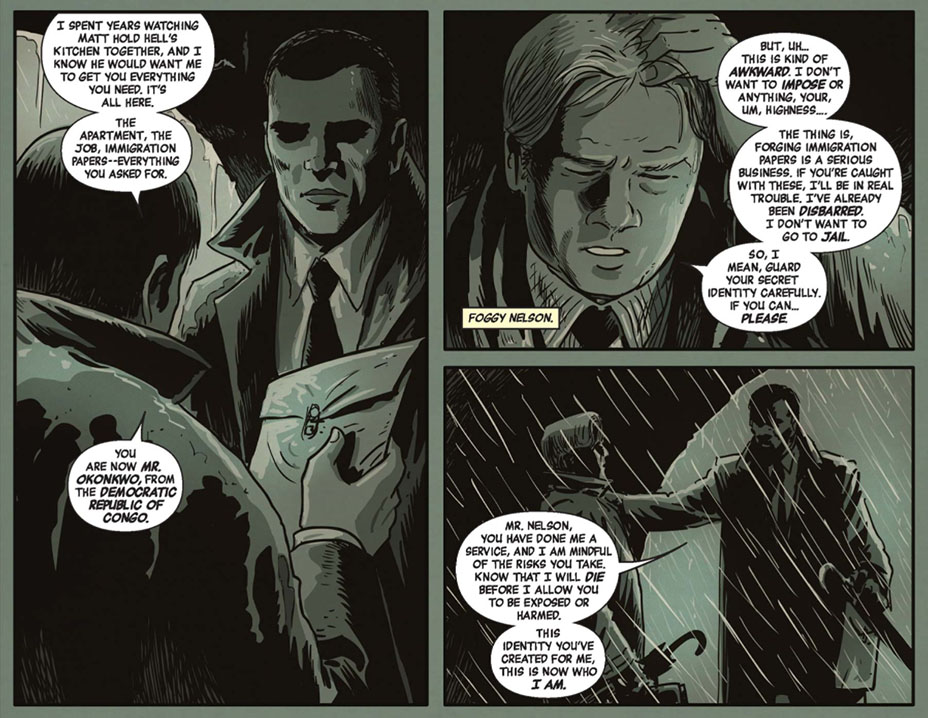 He saw it as a form of penance for his failure to protect Wakanda, but Marvel — and writer David Liss, who was behind the makeover — saw it as a way to revitalize the character, and revive sales of the Daredevil title, which was renamed Black Panther: The Man Without Fear as a result. It wasn’t exactly successful, lasting just less than two years before the series was canceled and T’Challa realized that Wakanda was where he belonged all along. As if everyone else didn’t already know that…

The Women Who Revitalized 'Black Panther'