Rock ‘n’ roll style is lighting up the big screen this fall, from the 1970s and ’80s androgynous glam of Bohemian Rhapsody, opening Nov. 2, to the contemporary country western and rock-pop stylings of Bradley Cooper’s A Star Is Born, which has scored well over $200 million at the global box office since its Oct. 5 bow.

Both films deal with the process of becoming a music icon, with the former chronicling the flamboyant life of Queen’s leather- and spandex-loving Freddie Mercury (Rami Malek) and the latter meta-musically stripping back the artifice of one of the greats of our time, Lady Gaga, who plays wannabe-turned-supernova act Ally.

Mercury was so keenly aware of his stage image, he famously said, “It’s not a concert you are seeing, it’s a fashion show.” In addition to doing research at the Queen archives in London, which contain a wealth of news clippings, costumes and more, Bohemian Rhapsody designer Julian Day tapped a who’s who of British fashion to help with the style icon’s gender-bending looks, starting with decadent (and long-shuttered) rock ‘n’ roll London boutique Biba, where Mercury’s female love interest Mary Austin (Lucy Boynton) worked when they met. “Biba owner Barbara Hulanicki put Mary at the front of the store because she dressed the best,” says Day, who sourced vintage Biba for Malek and Boynton. “Freddie went to art school and had a clothing stall at Kensington Market. He loved clothes.” 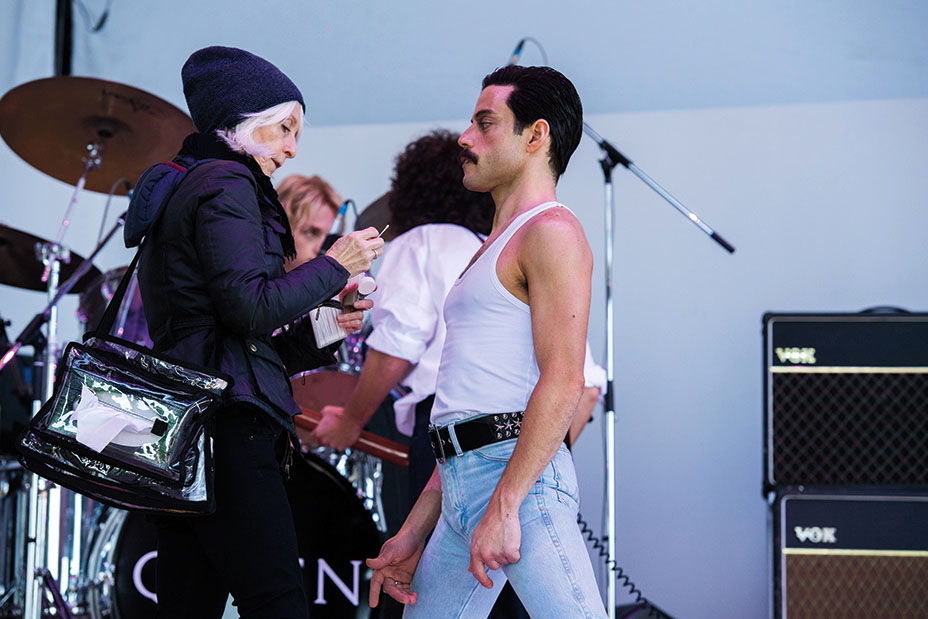 During a scene when the band is first signed to a record label, Malek rocks a white leather jacket with winglike shoulder details (his bandmates mock it mercilessly). “That white jacket was found in Jimi Hendrix’s flat when he died, or at least that’s what I was told,” says Day of the vintage rental from Carlo Manzi in London — noting that, if true, it’s a fitting tribute because Mercury was heavily influenced by Hendrix.

Day reproduced many of the performer’s most memorable looks from scratch, starting with multiple pairs of black velvet pants. “We cut so many, we nicknamed them the Freddie flare.”

In the 1970s, Mercury was a frequent patron of pink-haired British fashion designer Zandra Rhodes, who made the white pleated batwing top he wore during a 1974 performance. “Freddie went to her studio and saw her making a wedding dress. He said he’d like to have the top, so she chopped off the skirt and gave it to him,” says Day. “I went to Zandra and got her to reproduce the exact top in lighter fabric.” 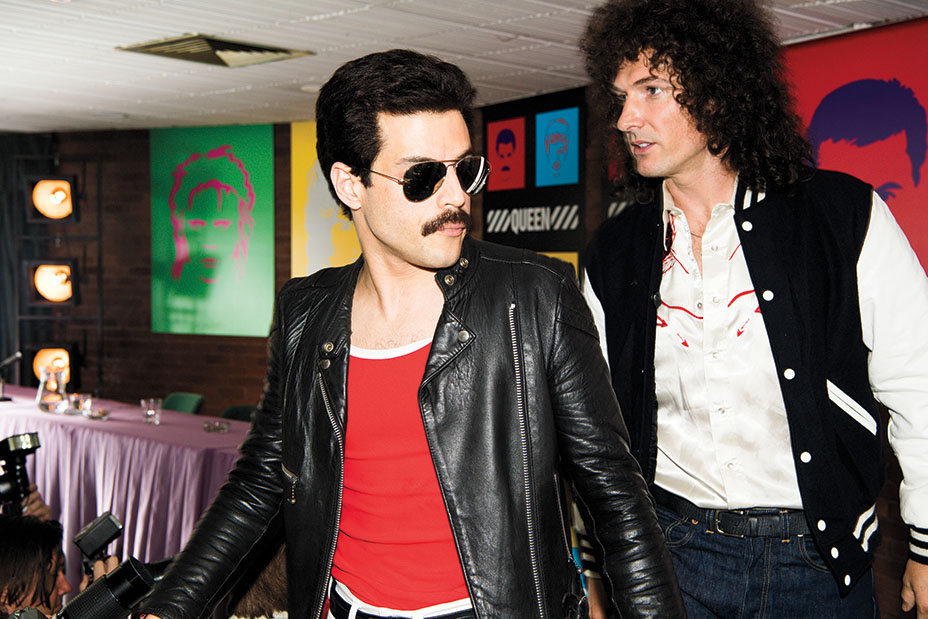 Mercury had a love of theatrics (“If anything, we have more in common with Liza Minnelli than Led Zeppelin,” he said of Queen) and relished wearing spandex jumpsuits that allowed him to jump around and interact with his audience in a way Day believes made him more accessible than contemporaries David Bowie and Elton John. (Day also is designing costumes for the Elton biopic Rocketman.) Re-creating one of Mercury’s harlequin jumpsuits that sold for more than 22,500 pounds (about $29,000) at auction in 2012 was “an incredible feat of engineering,” says Day, “since each diamond [pattern] had to be cut and sewn together; it required 30 to 40 fittings.” 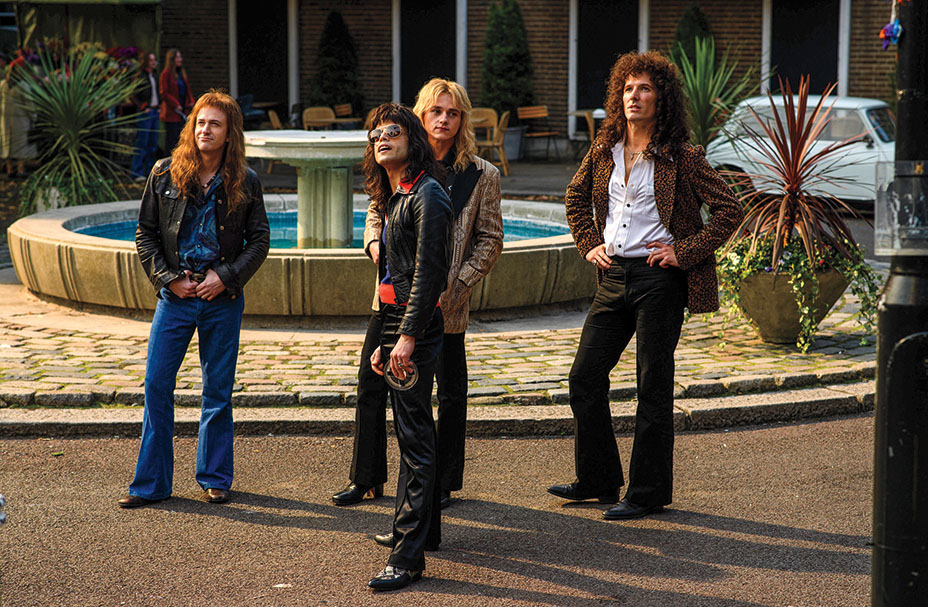 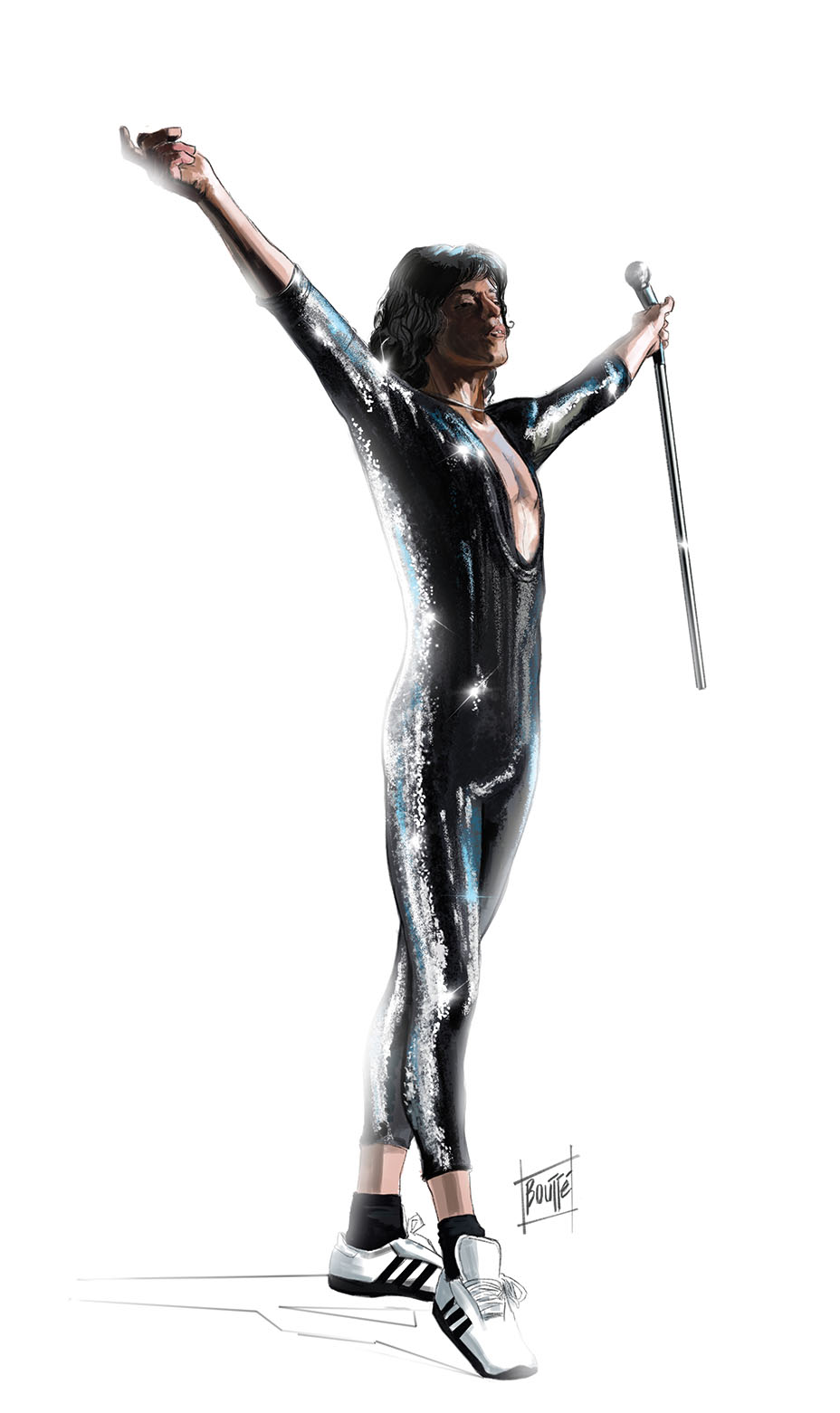 By the 1980s, Mercury had come out as gay, and his look evolved into something more macho, with leather jackets, BDSM-inspired stud accessories, tight jeans and tank tops inspired by gay club culture and reminiscent of Tom of Finland’s artwork. “He had visited a club in New York called Mineshaft in the Meatpacking District … His eyes were opened,” says Day. “The idea of fetish wear, now Dior and all the high-end fashion brands do it. But back then, to dress like that onstage and in public, it’s easy to forget how radical that was.” 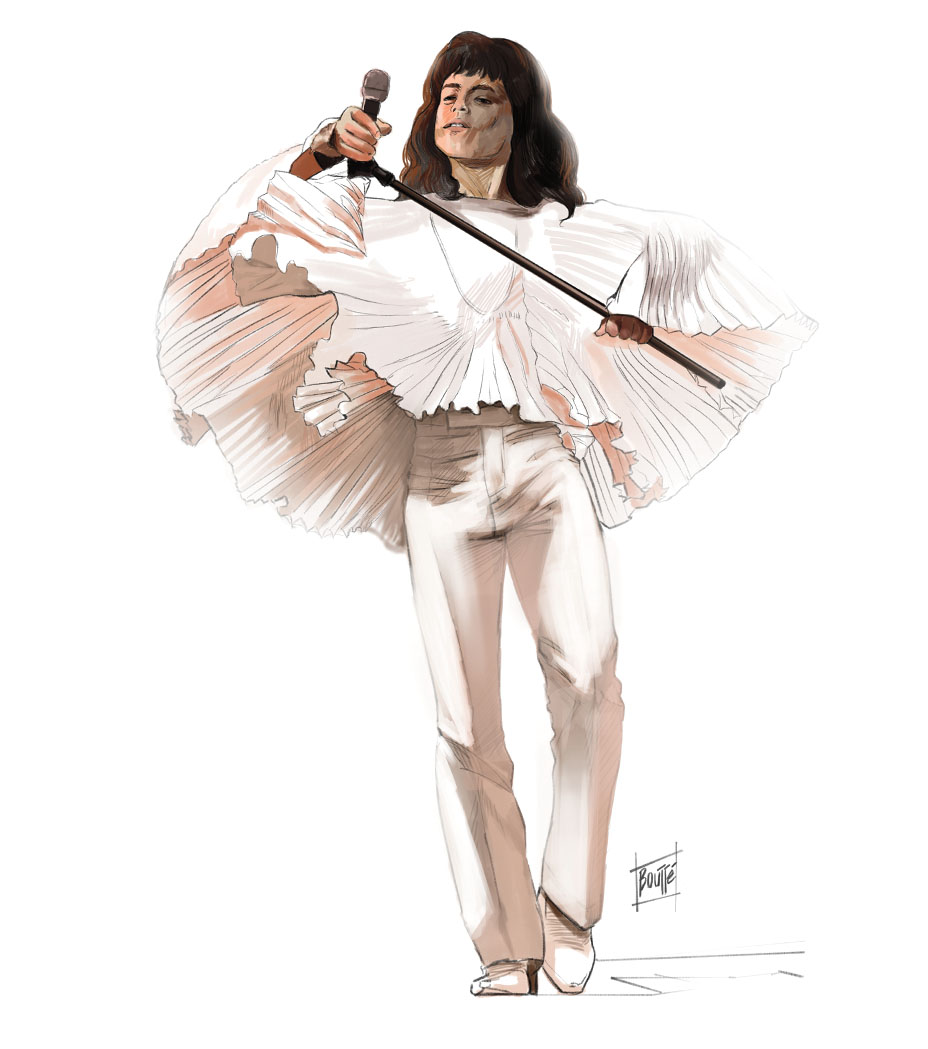 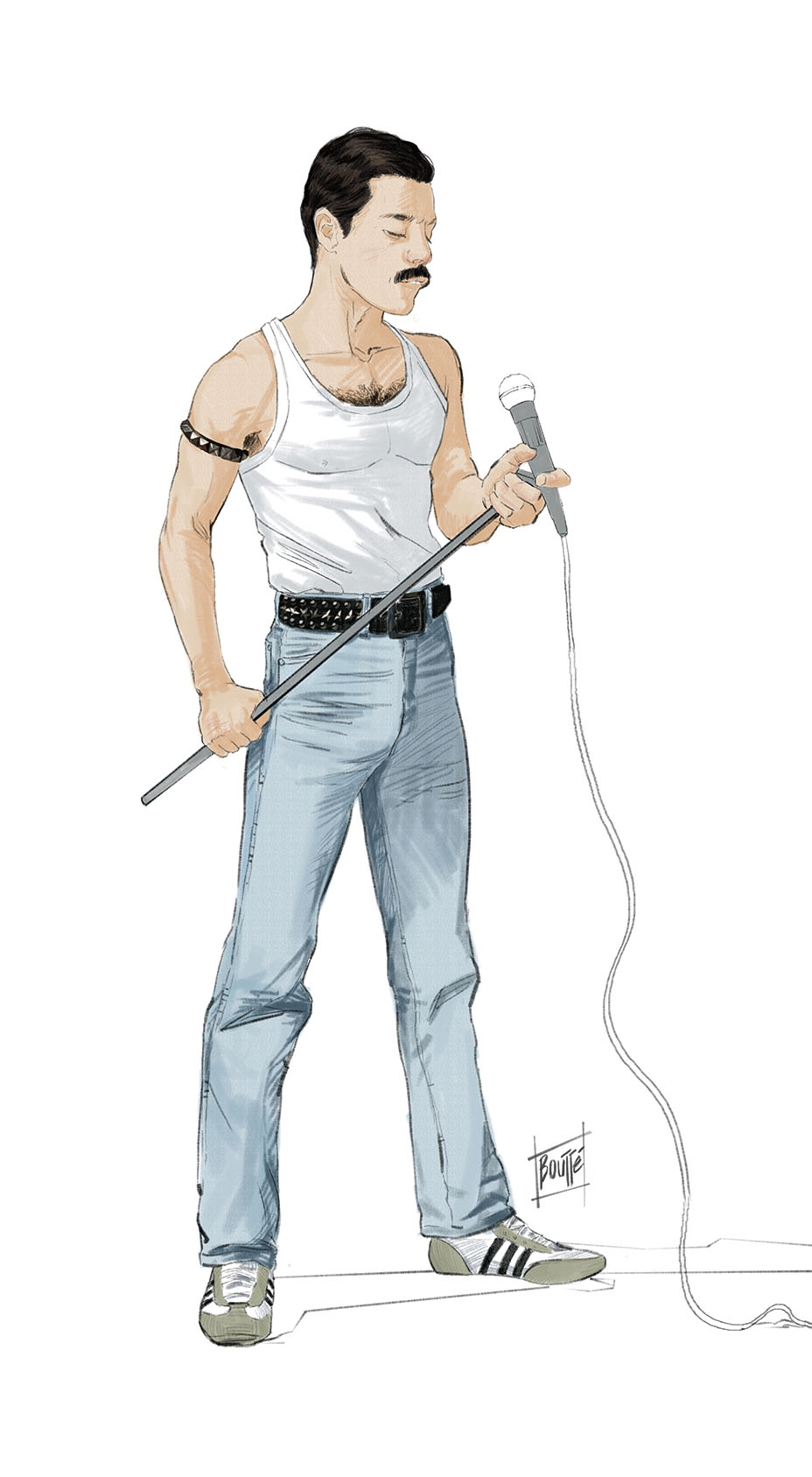 The most challenging look to create was also the most simple, says Day of Mercury’s 1985 Live Aid jeans-and-tank-top performance look. Day contacted Wrangler, which provided the original style of jeans the star wore, and Adidas, which reproduced the sneakers. “I sourced the studded belt and armband from the place he got them in London, but the white tank was the hardest. We did so many screen tests. It needed to be tight, but not too tight, and I ended up making 20 or 30 of them.” Malek came to him shortly before filming started and said, “I’ve been looking at the Live Aid footage, and I think the neckline needs to be slightly lower,” recalls Day. “We shaved off half a centimeter or less. But that detail made him feel better, and it looked right.” 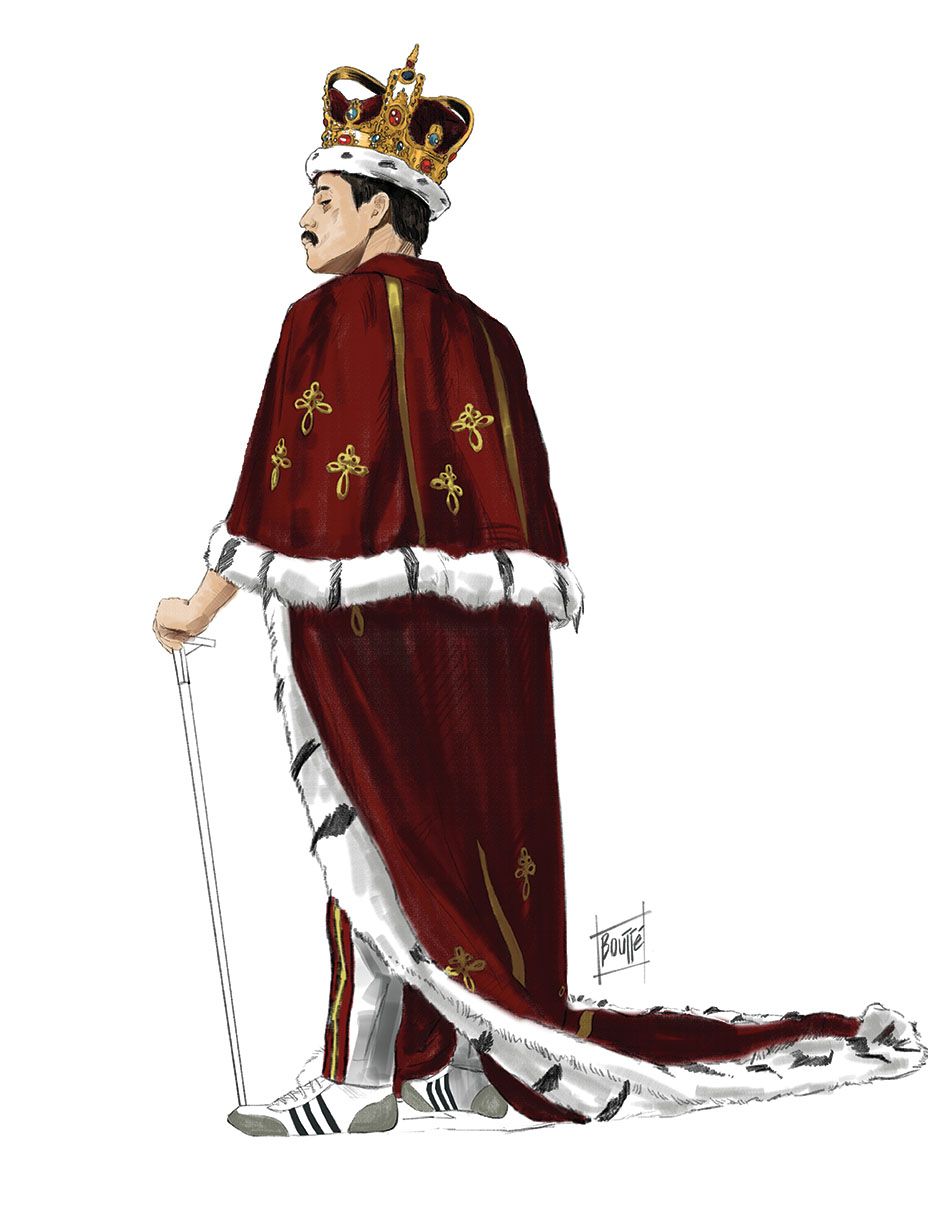 A Star Is Born costume designer Erin Benach says of Gaga’s Ally and her style evolution in the film: “We were telling a story through costumes, carefully plotting each time we saw her to be one notch away from where she started: a blank canvas, wearing a simple black dress. It was about taking her from zero to 100.”

When Ally begins touring with Jack (played by Cooper), she finds her voice and her style, picking up vintage pieces along the way for “a country Stagecoach Festival vibe,” says Benach, noting the performance when Ally wears a white embroidered jumpsuit reminiscent of cowboy couture label Nudie Cohn, which has dressed Gram Parsons, Hank Williams and Jenny Lewis. “That was the apex of when she started to feel like a star,” explains the designer, adding that Ally’s pop-tastic solo stage looks (clear plastic pants and crop top) were inspired by In Living Color‘s Fly Girls of the ’90s. 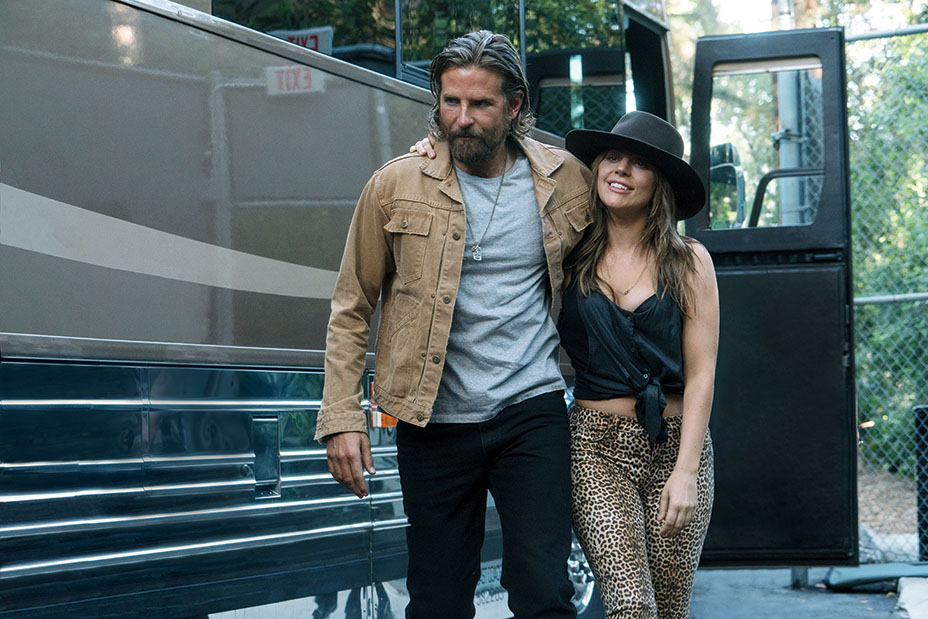 She and Gaga tried not to use too many recognizable labels (pinstripe pants with silver chain detailing are by Instagram-fave brand Miaou, and a fringed shawl was Gaga’s own) and shied away from actual star motifs. The exception is a high-fashion moment in the form of a gold Gucci custom gown worn during a fateful Grammy scene.

“As a performer herself,” says Benach, “Gaga knew what captured well on camera.” 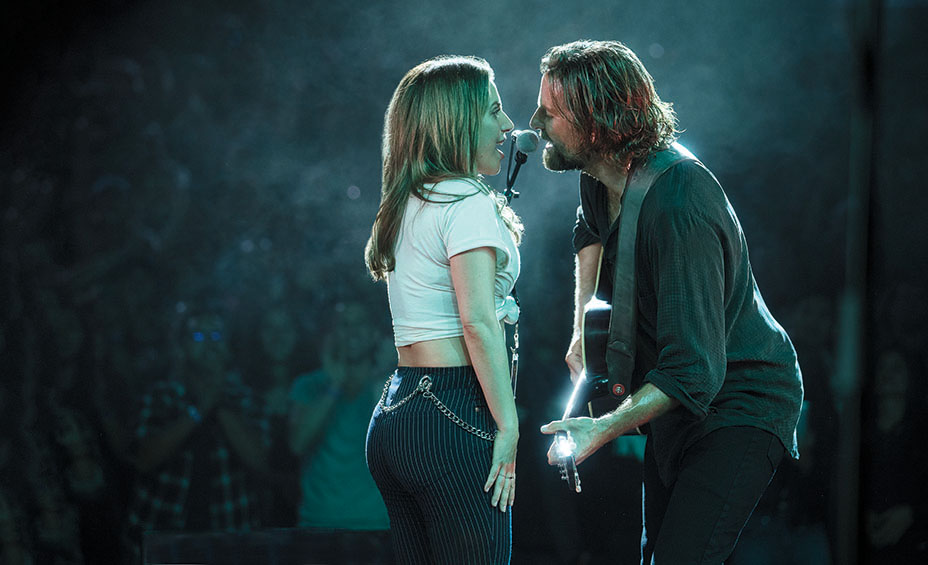