Sorry to Bother You filmmaker Boots Riley is taking aim at BlacKkKlansman as it enters its second weekend at the box office, calling Spike Lee’s latest film a “made up story” that softens the reality of police brutality and police shootings of black Americans.

In a three-page essay attached to a tweet on Friday, Riley laid out his argument against the movie. His thesis, written a quarter of the way into the story, posits that BlacKkKlansman is “a made up story in which the false parts of it to [sic] try to make a cop the protagonist in the fight against racist oppression. It’s being put while Black Lives Matter is a discussion, and this is not coincidental. There is a viewpoint behind it.”

Lee’s film, which was released last weekend, is based on real-life policeman Ron Stallworth’s 2014 memoir Black Klansman. The pic follows the Colorado Springs detective (played by John David Washington) as he infiltrates a local division of the Ku Klux Klan, first by speaking to members over the phone and subsequently by instructing a white colleague, Flip Zimmerman (Adam Driver), to act in his stead in in-person meetings with the Klan.

In its first weekend, BlacKkKlansman grossed $10.8 million at the box office, which was “a solid start for a specialty film launching in summer versus during awards season,” The Hollywood Reporter‘s Pamela McClintock wrote.

Riley argued the film included “fabricated” story points because the real-life Stallworth infiltrated a black radical group for three years instead of briefly, as the pic appeared to portray. There, Riley says, “he did what all papers from the FBI’s Counter Intelligence Program (Cointelpro) that were found through the freedom of information act tell us he did- sabatoge a Black radical organization whose intent had to do with at the very least fighting racist oppression.”

Riley also takes issue with a bombing scene in the movie, the Zimmerman character’s Jewish heritage, a scene of a cop expressing racist views at a bar and a scene involving civil rights organizer Kwame Ture, among other points.

Riley added that black Americans face “actual physical attacks and terrorizing due to racism and racist doctrines” mostly from the police on a day-to-day basis. “So for Spike Lee to come out with a movie where a story points [sic] are fabricated in order to make Black cop and his counterparts look like allies in the fight against racism is very disappointing, to put it very mildly,” he wrote.

Riley ended the piece with a reference to recent reports that Lee was paid $200,000 in 2016 to work with the NYPD on an ad campaign that attempted to improve relations with minority communities in the city. “Whether it actually is or not, BlacKkKlansman feels like an extension of that ad campaign,” Riley wrote.

Riley’s film, Sorry to Bother You, is entering its seventh weekend in theaters. 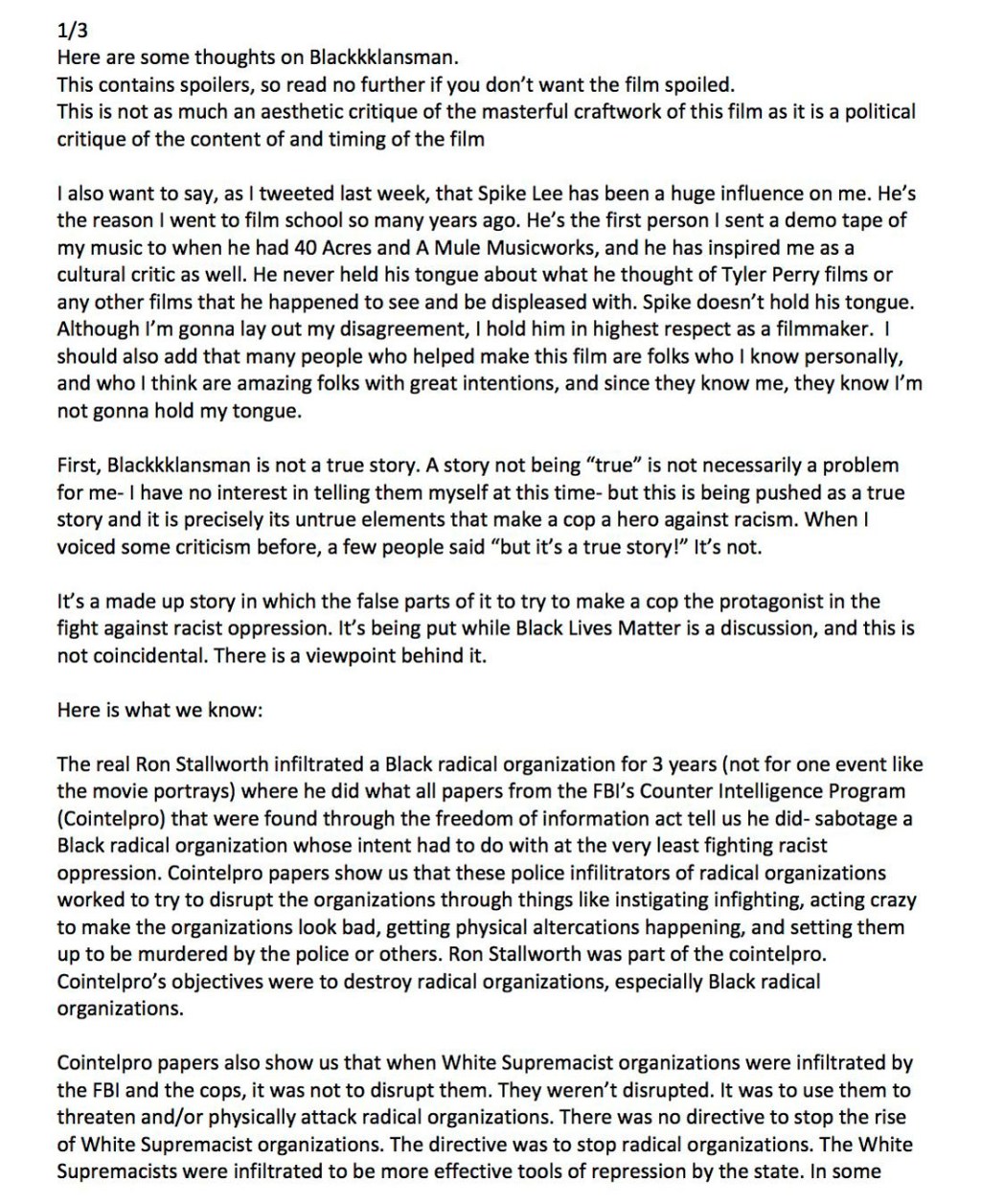 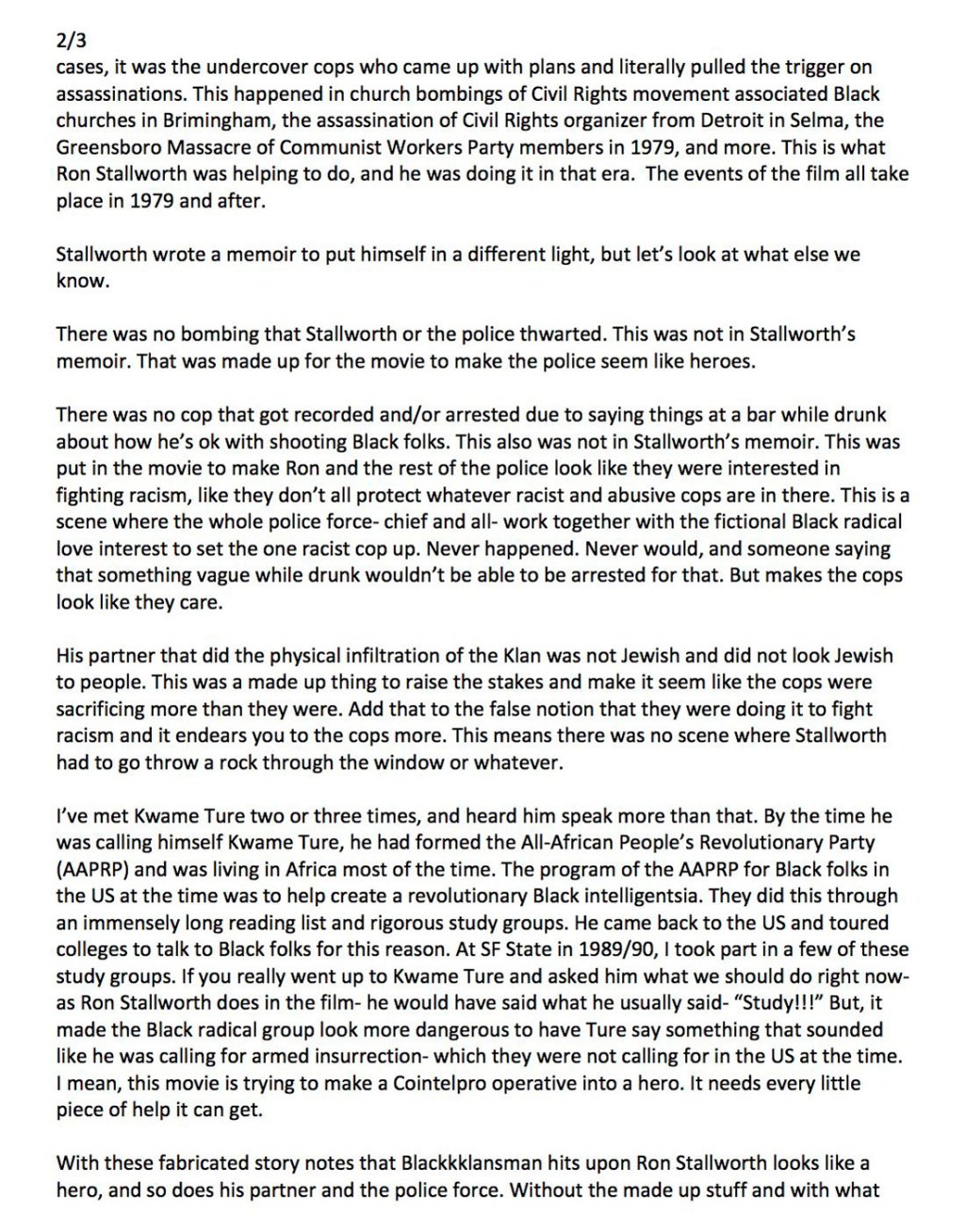 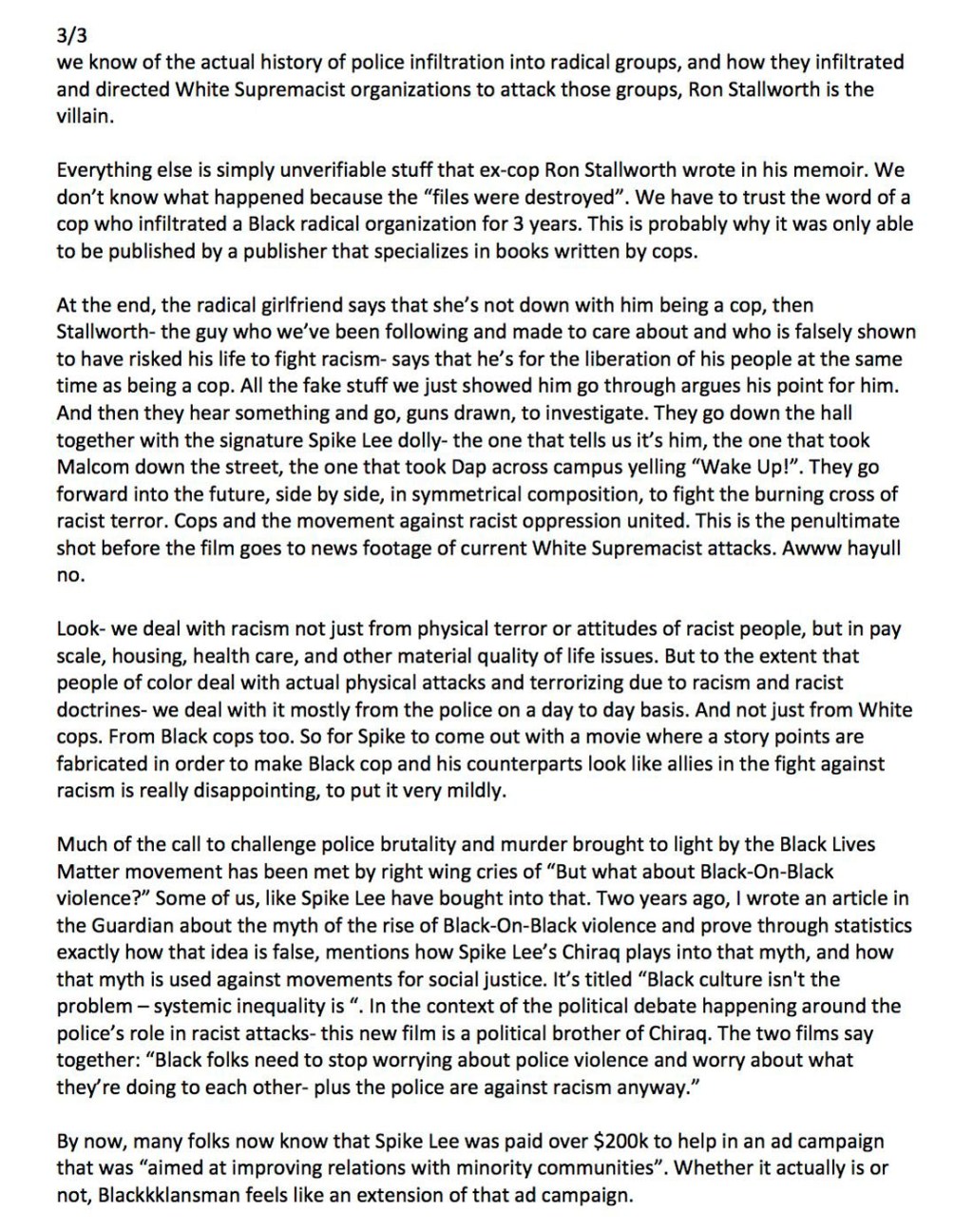 Kareem Abdul-Jabbar on the NFL, 'BlacKkKlansman' and the Summer Movie as Protest Song