Fifty years after Mart Crowley’s landmark comic drama about a group of gay men in pre-Stonewall New York first made waves, director Joe Mantello vigorously shakes the dust off The Boys in the Band. What might have been another bulletin from the distant queer past is transformed into a scintillating portrait of the self-loathing that festers in ghettoized subcultures, perhaps as much now as then. Starring a high-caliber cast of out gay actors led by Jim Parsons, Zachary Quinto, Matt Bomer and Andrew Rannells, the production is sharpest when the zingers are flying back and forth like missiles, but the anger coursing through the play’s veins still scalds.

Guest Column: How One Showrunner Found Her Queer Identity (and Connection) During the Pandemic

With its stream of caustic one-liners, its increasingly antagonistic behavior fueled by liquor, and its malicious party game designed to make the guests squirm, Crowley’s entertaining play owes a debt to Edward Albee’s Who’s Afraid of Virginia Woolf? But that’s not to undermine its originality or importance among canonical LGBT theatrical works.

Premiered off-Broadway in 1968, The Boys in the Band represented a breakthrough in its candid depiction of the lives of gay men, making inroads into mainstream cultural consciousness that many credit with helping to shift attitudes as the gay rights movement was gathering steam. Queer pundits over the decades have had ambivalent attitudes toward the play — and to William Friedkin’s faithful 1970 screen version, which featured the original stage cast. As shame made way for pride, it was viewed as an uncomfortable anachronism, perpetuating the negative stereotype of the bitchy, self-hating, maudlin gay victim. In the 1980s, the gay community’s anguished response to the AIDS crisis made the insular hedonism of Crowley’s characters seem trivial. But in the post-equality era, the play stands as a compelling portrayal of internecine savagery bred by the stigma of isolation and oppression, by turns bitingly funny and moving.

Producer Ryan Murphy was the initial driving force behind the revival, the play’s first-ever production on Broadway; he helped to assemble the powerhouse cast and bring on board Mantello, who has his own influential association with notable gay-themed theater as both actor and director, including Angels in America, The Normal Heart and Love! Valour! Compassion!

The reputation of Crowley’s play already was somewhat rehabilitated by a site-specific 2010 Transport Group production staged in a Chelsea penthouse, and the following year by filmmaker Crayton Robey’s engrossing documentary Making the Boys, which celebrated the play’s revolutionary role in opening doors for wider gay representation in popular entertainment. Mantello’s superbly cast and acted production makes an even stronger case for its durability, particularly at a time when rights we now take for granted seem suddenly vulnerable under an administration that treats progressive policy with slash-and-burn scorn. 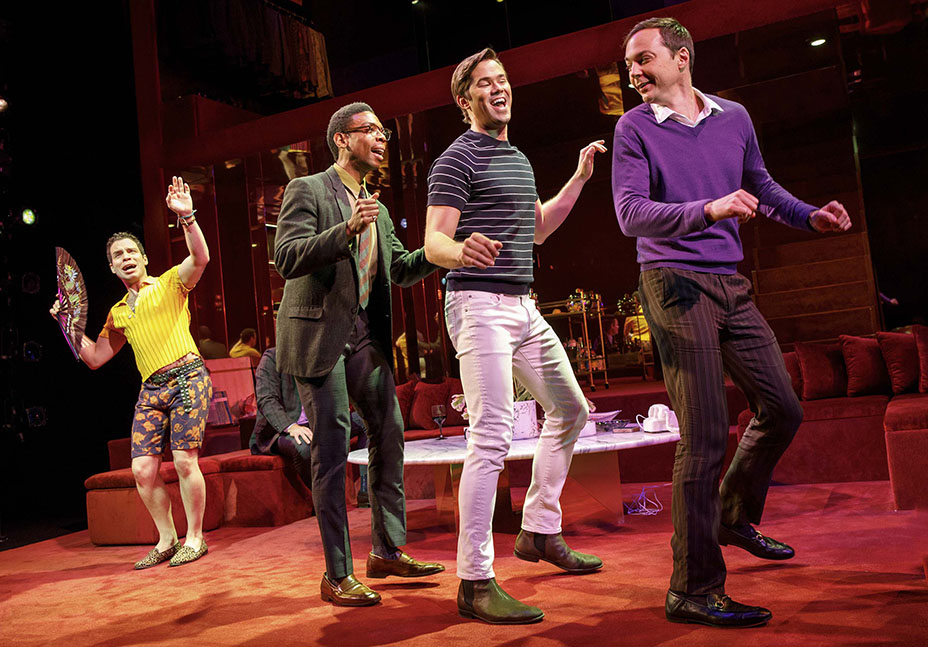 The scale is significantly smaller, of course, but the experience has parallels to the way watching a blockbuster studio release with an African-American director and a charismatic cast of black actors made Black Panther so cathartic for audiences of color. It’s a comparable thrill for LGBT theatergoers to see a major Broadway production of a queer-themed work in which nobody in the all-male cast or creative team feels compelled to drop conspicuous mentions of their wives or girlfriends in interviews. And although Mantello adheres to the original period, there’s unapologetic ownership and humanity in the incisive characterizations — ranging across a whole spectrum from outrageously queeny to what used to be called “straight-acting” — which banishes any simplistic perception of the play as a voyeuristic pity party.

The central figure is chronically single Michael (Parsons), a somewhat lapsed Catholic from Mississippi and an alcoholic struggling to stay off the gin. He’s addicted to living beyond his means, a weakness sumptuously illustrated by designer David Zinn’s ostentatiously stylish Eastside duplex apartment set, its mirrored surfaces bathed in the warm purples and pinks of Hugh Vanstone’s lighting.

Michael is throwing a birthday party for his prickly friend Harold (Quinto), who shows up late and stoned, shutting down criticism of his tardiness with a typically acidic retort that weaponizes his self-contempt: “What I am, Michael, is a 32-year-old, ugly, pockmarked Jew fairy — and if it takes me a while to pull myself together and if I smoke a little grass before I can get up the nerve to show this face to the world, it’s nobody’s goddamn business but my own.”

Fabulously attired by Zinn in garish period chic and peering with languid disdain from behind dark glasses throughout, Quinto somehow makes you believe he actually is ugly. In his slithering physicality, he takes a reptilian cue from the original Harold, Leonard Frey, while imprinting the role with his own stamp. His supercilious deadpan comments, lobbed like lazy grenades, are a wicked delight. Even when he’s sizing up the young hustler identified only as “Cowboy” (Charlie Carver), a dumb hunk presented to him as a birthday gift by flaming decorator Emory (Robin de Jesus), Harold is like an appraiser valuing shoddy merchandise, albeit with a hint of toxic lust. Quinto gives easily the most transformative performance in a fully committed cast.

In addition to Emory — who gets many of the best quips, delivered by de Jesus with impish defiance — the invited guests include bookish Donald (Bomer), a jaded former lover of Michael who has fled the city but still makes weekend visits for therapy. Then there’s math teacher Hank (Tuc Watkins), who left his wife and kids for oversexed photographer Larry (Rannells) and now struggles to accept his partner’s promiscuity. The sole black member of the group, and thus doubly marginalized, is Bernard (Michael Benjamin Washington); he habitually lets Emory make him the butt of “Uncle Tom” jokes as a way of giving his friend’s fragile ego a boost. Or maybe putting himself down. 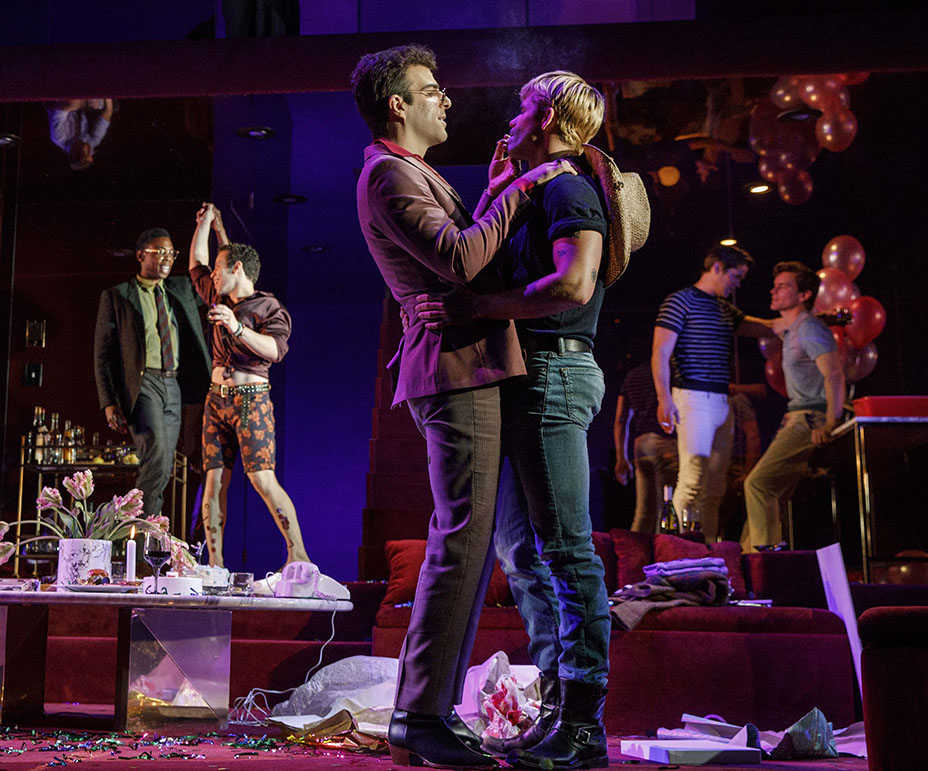 The uninvited outsider is Michael’s ostensibly straight college friend Alan (Brian Hutchison), who calls in crisis mode and drops by on impulse, hinting at problems in his marriage. His startled entrance as the guys are reviving an old Fire Island dance routine to Martha and the Vandellas’ “Heat Wave” is a hoot. It’s also the first of many instances in which Alan’s reluctance to turn around and leave raises questions about the true nature that he may be hiding, an uncertainty Michael twists like a knife once he falls off the wagon.

That happens during a freeze in the action, breaking the real-time illusion under which the play normally operates. Cuts to the text here (the play runs a brisk one hour and 50 minutes, with no intermission) make the descent into hostile warfare more abrupt, though Mantello and the ensemble modulate the transitions with sufficient command to keep the shifts believable.

The no-turning-back point of the evening occurs when a sloppily drunk Michael comes up with a party diversion he calls “Affairs of the Heart,” a combination of the Truth Game and Murder, “with a new twist.” He coerces his guests, one by one, to make a phone call to the one person they truly believe they have loved, awarding points according to the extent of their declaration. That prompts revealing moments first for Bernard and Emory, with Washington and de Jesus uncovering affecting layers of bruised vulnerability; and next for cocky Larry, with Rannells effectively showing how Hank’s emotional directness throws him off-balance. But the game backfires on Michael when he doesn’t get the result he anticipated from Alan.

Parsons walks a tricky line with great assurance from playful Southern charm and cashmere-clad piss-elegance through neurotic agitation to barely contained rage, and if Michael’s final sobbing meltdown feels melodramatic and a touch forced, that’s more to do with the period conventions of the writing than the performance or direction. Not that it makes the production any less satisfying. However, I found the throwaway moments amid the wreckage more resonant, such as Harold eviscerating Michael and then quietly, almost tenderly, adding, “Call you tomorrow,” as he ushers his midnight cowboy out the door.

It’s in those signs of connective tissue able to withstand even the worst flagellation — both self-induced and otherwise administered — that Mantello and his gifted cast trace a sense of outsiders finding fortifying protection in one another, no matter how much damage they inflict. And the final image of resilient sensuality, a directorial flourish not in the text, eloquently brings home that point of survival, unity and love that won’t be denied. They’re here, they’re queer, get used to it. 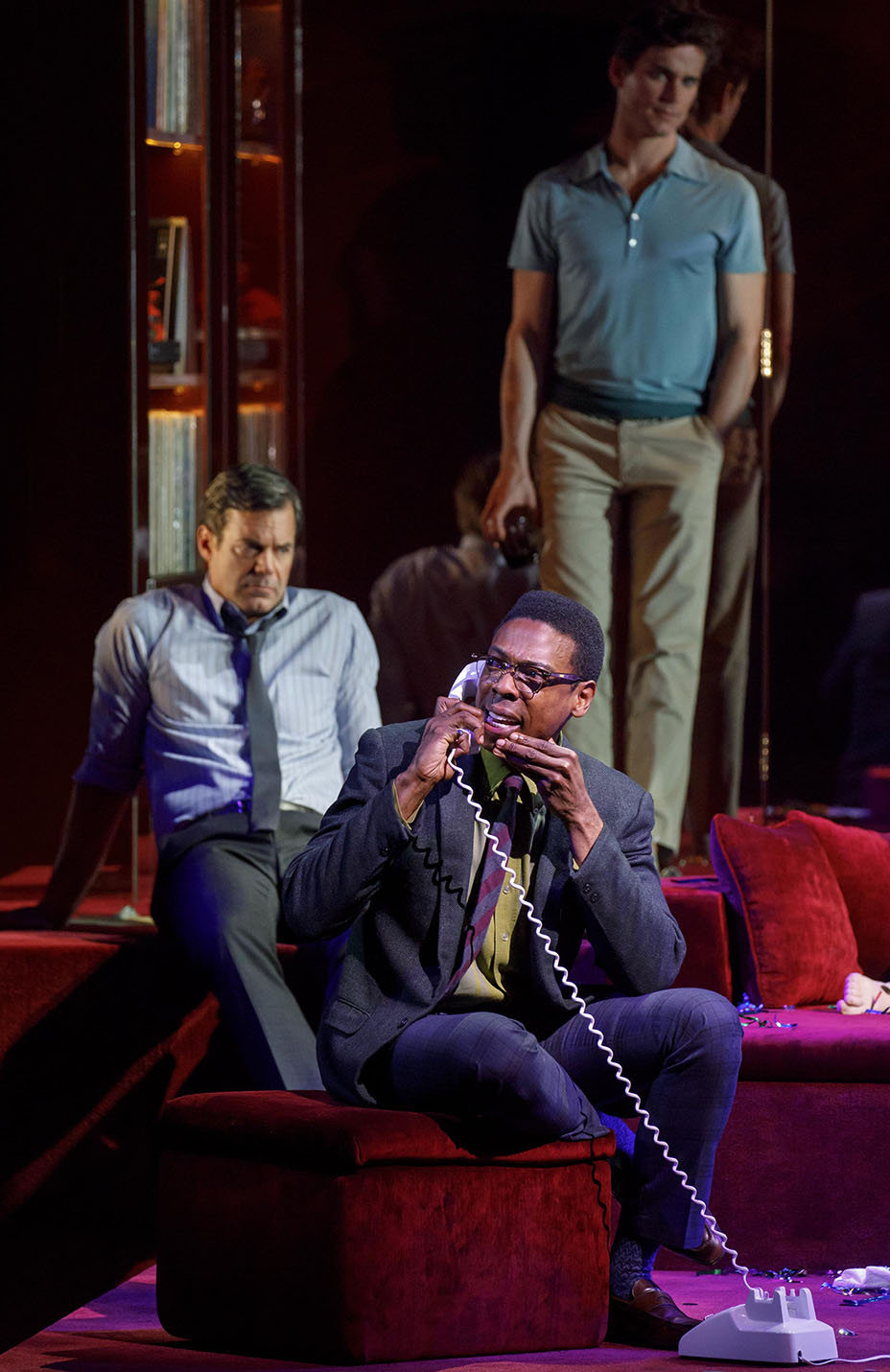