Strong women, that’s all anyone wants to see these days. Maybe not in the U.S. Senate, but on the Grammys stage in Los Angeles and on the runways at New York Fashion Week, where Prabal Gurung won the day on Sunday showing a parade of feminist T-shirts for a finale.

The female archetypes at Sunday night’s big music awards show ran the gamut, from pregnant Beyonce as the queen bee (Bey), literally thrusting her reproductive power into millions of viewers’ faces, to Adele, dressed for the evening in a green goddess Givenchy gown, showing strength in humility by putting her tribute to the late George Michael ahead of her ego, scrapping a botched performance and starting over so she could nail it.

Grammy Awards: A Pro-Trump Statement on the Red Carpet

When Adele won the Grammy for Album of the Year at the end of the evening, she dedicated it to Beyonce and her groundbreaking album Lemonade, a gracious example of women supporting women. It was one of many powerful moments at the Grammys, which took on President Agent Orange, as A Tribe Called Quest calls him, in a one big cathartic sing-along.

The chorus was similar at the fall 2017 runway shows Sunday, which spanned all the feelings, from rage to sorrow, often using feminism as a sales pitch, a phenomenon that began in recent memory on the runways in 2015 with Chanel’s women’s march-themed show, and returned in September 2016, when Maria Grazia Chiuri’s Dior debut collection featured “We Should All Be Feminists” T-shirts.

At New York Fashion Week, the day began with the beautiful Beckham clan sitting front row at mommy Victoria Beckham’s fall 2017 collection dedicated to “strength, reality and identity,” so much that it can be conveyed through nice-looking oversized menswear check blazers (if you buy one thing next season…) worn over fluid silk dresses, mixing masculine colors like oxblood and navy with feminine rose and red lipstick.

Fashion Gets Political: On and Off the Runway Statements

At Sies Marjan, the buzzy label by Sander Lak, who spent five years at Dries van Noten before launching his own line, the clothes were a contrast of comfort and kitsch, with slip dresses and fringed blanket coats in shades of Barbie pink, lavender, creamsicle orange and seafoam green (deliciously, one model’s hair color matched her dress), accessorized with the brand’s kooky new shoes, including chukka loafers and sling backs with flared heels. It was a perfect lineup for an edgy Hollywood star. 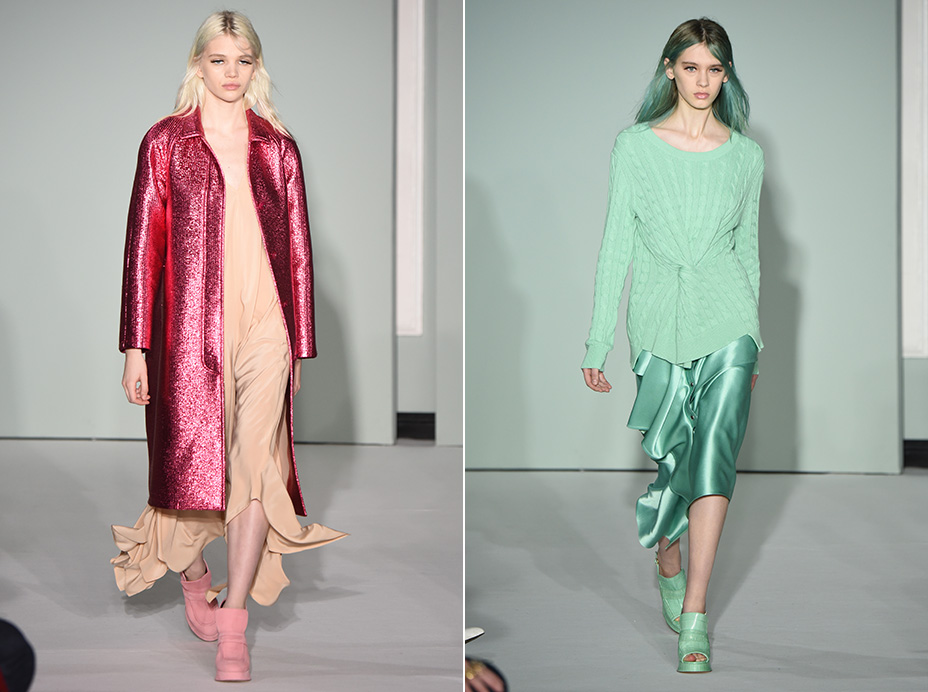 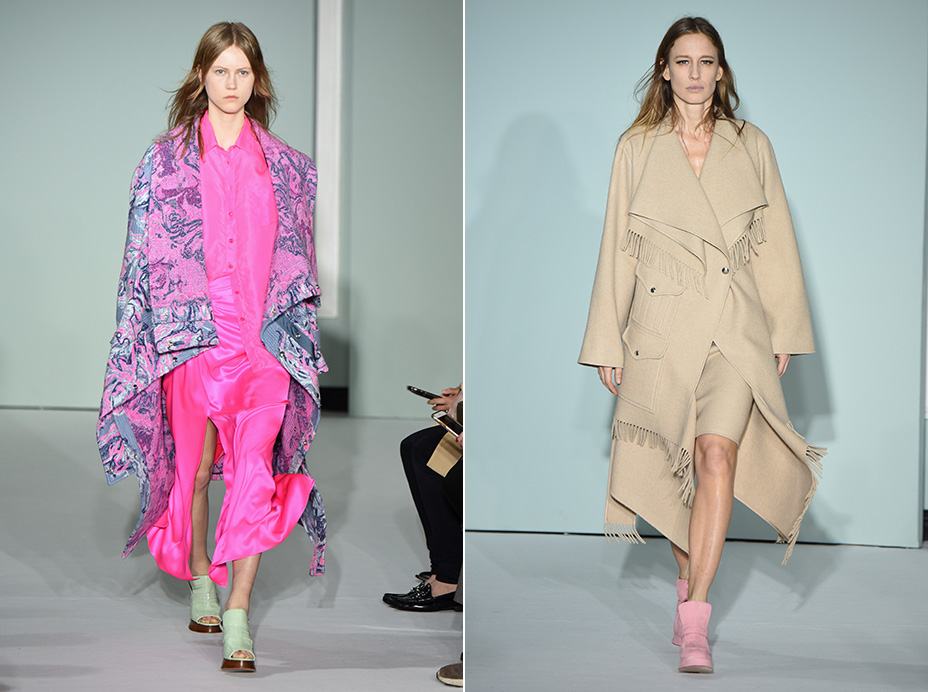 Exhibit A: I couldn’t take my eyes off of the otherworldly glamour of Cuba Tornado Scott in the front row. The model and granddaughter of director Ridley Scott seemed to be channeling one of his Blade Runner replicants with her amazing look.

Cuba Tornado Scott, a model and the granddaughter of director Ridley Scott, causing a whir at @SiesMarjan #NYFW pic.twitter.com/C2CX1vPenV

For Joseph Altuzarra, the inspiration was Renaissance paintings, which he took as the starting point for lush velvet pantsuits, floral embroidered cable knit sweaters, fur coats dripping with pearls and bejeweled headbands we haven’t seen the likes of since the Reagan years. All of his signatures were there, too, including the side-slit pencil skirt, worn with a houndstooth riding blazer, and his popular shirt dresses, rendered in a floral jacquard for the season and finished with pearl buttons.

Altuzarra’s show may have been the last of the day, but Gurung’s was the true showstopper, featuring an all-star front row (Diane Kruger, Priyanka Chopra, Huma Abedin and enthusiastic picture-taker, Sarah Jessica Parker) and an inclusive runway cast that included real-size models (the designer is currently collaborating with Lane Bryant on a collection).

Christian Siriano's Message on the Runway: "People Are People" 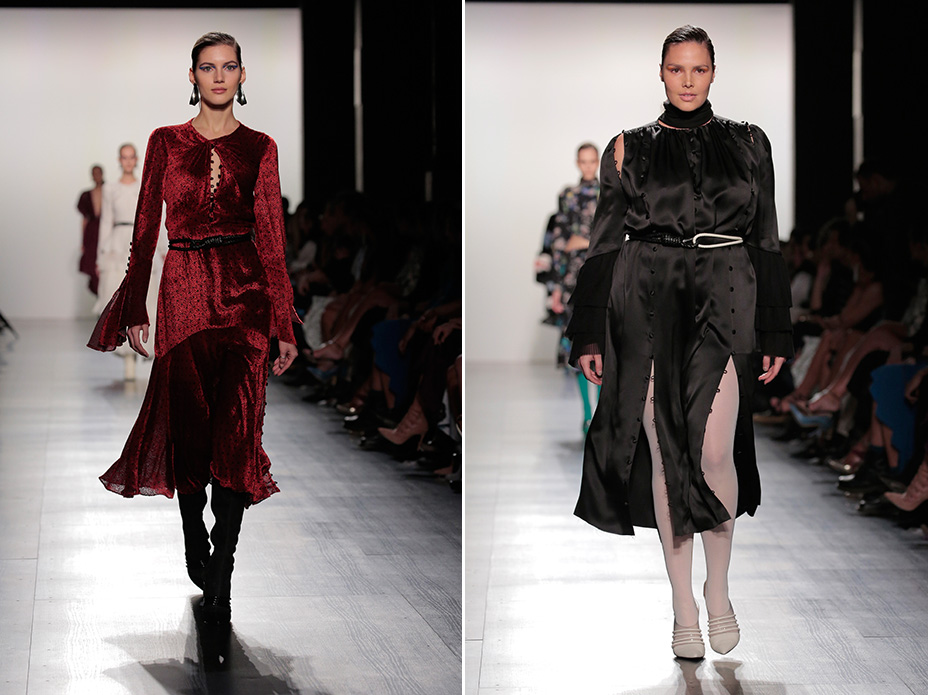 The designer, who hasn’t shied away from politics before, addressing the devastating 2015 earthquake in his native Nepal in a past collection, sent out decadent outerwear (a blurred camo mink coat, for real), tailored blazers and feminine silk dresses, the best in a garnet velvet. He ended with a feel-good feminist march of slogan T-shirts (“This is what a feminist looks like,” “The future is female,” “I am Gloria,” “I am Malala,” “I am Michelle”)  that had people scrambling for their phones and wiping tears from their eyes.

Not just for show, the designer confirmed the t-shirts will be for sale. He said, “For me, feminism is not just a trending topic.”