Brené Brown is moving her podcasting business exclusively to Spotify.

The professor and author has struck a multiyear deal with the audio giant that includes turning her popular podcast, Unlocking Us, into a Spotify exclusive. It’s the latest in a series of moves by Spotify to scoop up top talent.

In an interview, Brown says that the move is about “wanting one home” for her audio endeavors, which will also comprise a new workplace-centric podcast, Dare to Lead, and curated music playlists.

Brown’s deal is with Spotify-owned Parcast Studios, which since its 2019 acquisition has expanded beyond its roots as a home for true crime tales and other genre fare. Parcast founder and managing director Max Cutler says he’s been pursuing a business partnership with Brown since March, when he heard the first episode Unlocking Us and was struck by her presence at the microphone. He began talking with Brown about a deal in June. “Brené has the charisma, the connection to an audience and the ability to grow that very few, candidly, really have,” he says.

Brown, a researcher of human behavior who gained attention in 2010 for TEDx talk “The Power of Vulnerability,” launched Unlocking Us this spring following the release of several books and the debut of a Netflix special last year. The podcast description promises conversations that provide an unvarnished look at “the messiness of what it means to be a human.”

Audiences, who have seen their lives upended by the coronavirus pandemic this year, have responded to the show. Unlocking Us was one of the largest podcast debuts of the year, quickly rising up on Apple’s podcast chart, where it regularly sits in the top 20 today.

Though a canceled premiere during SXSW wasn’t what Brown had in mind for the launch of the show, she says the events of the last six months have been a helpful reminder to stop worrying about who she should interview and instead focus on answering the question, “what do the people who are listening right now need to hear to get out of bed and make it through the day?”

Unlocking Us, which launched in partnership with podcast studio Cadence13, now joins the Parcast Network and will become a Spotify exclusive in January 2021. 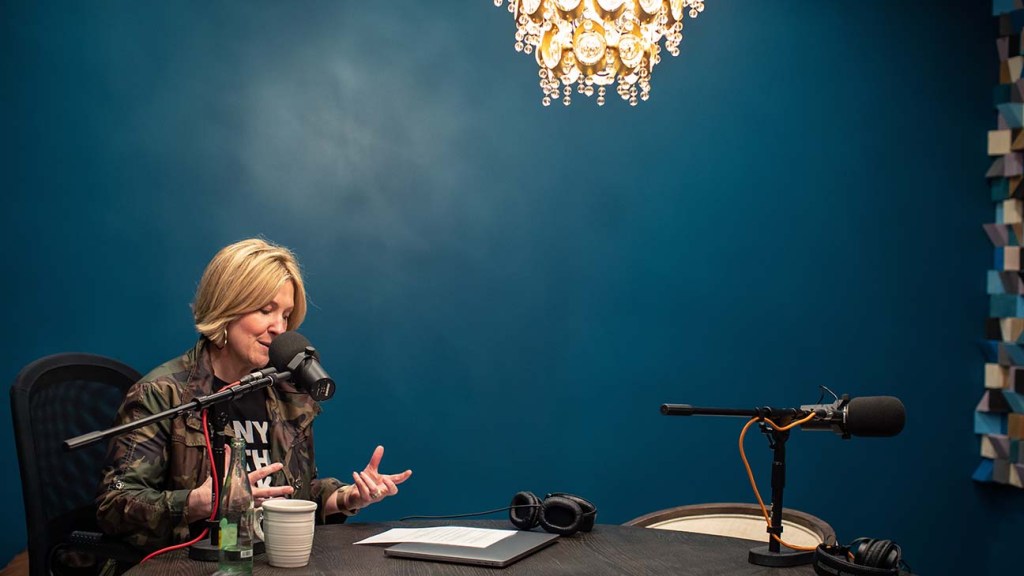 Brown’s new show, Dare to Lead, will become available for Spotify users on Oct. 19. Building on the research she laid out in her 2018 book of the same name, Dare to Lead will look at the four skill sets of courage. “I don’t believe that leadership is about shoulder pads and pinstripes,” Brown says. “We need leaders everywhere — social justice, corporate community, faith, across the board. This is a podcast about people who want to learn more about themselves and how to step up and lead.”

Cutler adds, “This is going to be a huge podcast.” Though Parcast might be better known for shows like Unsolved Murders and its Horoscope Today franchise, he points to data that shows the studio’s primarily female audience also enjoys listening to Brown. “We were really built on storytelling,” he adds. “Who better to introduce a new vertical of Parcast content than the premier researcher and storyteller?”

Brown says her move to Spotify has roots in an aha moment she had in 2018. After a day jam-packed with meetings — with questions swirling about whether she should hire more employees and accept outside funding — she decided that she wasn’t interested in building a large business. She recalls saying, “I am a researcher, I’m a teacher, and not only do I want to do this work, I want to live this work. I don’t want to come into my office one day and have 300 people here. I want to make content.”

That choice, she says, “really drove needing a partner who was a world-class distributor and had all the other pieces in place.”

As for why Brown picked Spotify, it came down to her desire to find a partner with an international audience — and her love of music. “I can’t downplay the significance of the music,” she says. As part of the deal, she has taken over Spotify’s Yacht Rock playlist added new songs to the collection. “I took this curation very seriously,” she says, teasing that she will work on other playlists and create mix tapes for the guests on her shows.

With Brown, Spotify continues to bring some of the most popular podcasts exclusively to its platform. The company struck a large deal for The Joe Rogan Experience earlier this year and also nabbed an exclusive debut window for upcoming seasons of Esther Perel’s Where Should We Begin. It also has an exclusive podcasting deal with Barack and Michelle Obama, who released The Michelle Obama Podcast this summer.

Though Unlocking Us will eventually leave other podcasting platforms, Brown says it was important to her that the show and future projects will still be available for free. Spotify offers both a free, ad-supported listening tier with 299 million monthly users and a paid product with 138 million subscribers. The question she says she always asks herself when evaluating new opportunities is, “does it serve the work and the research?” The answer, when she was evaluating a partnership with Spotify, was yes. “I think this move serves the work,” she says. “If it serves the work, I think the community will follow.”

Spotify’s Daniel Ek Has a Plan to Harness Hollywood for Podcasts and Create "the World’s No. 1 Audio Platform"