A Broadway play was the last thing Brian Cox thought he’d be doing right now. He had planned to enjoy the early fall at his house in the country and relax after wrapping filming on HBO’s Succession, which aired its nail-biter season two finale on Sunday night.

So when director Bill Rauch asked Cox to be a part of a staged reading of Robert Schenkkan’s The Great Society, which explores the second half of Lyndon B. Johnson’s presidency, he hesitantly accepted. (Schenkkan covered the first half in All the Way, which earned Tony Awards for best play and lead actor Bryan Cranston in 2014.) When Rauch later asked if he could do a full production, Cox was skeptical, given that it left him only three weeks to prepare after the end of shooting.

“It was the quickest transition ever. I didn’t think I was going to do it,” Cox said. “With the help of others I was able to achieve it. But it was really quite scary to be honest with you.”

Cox stars as President Johnson during the period in which he passed landmark initiatives like the Voting Rights Bill while also wrestling with the casualties of the Vietnam War. In his review for The Hollywood Reporter, chief theater critic David Rooney wrote, “Cox provides a galvanizing center that keeps you watching, even more so as this driven, passionately civic-minded man begins to acknowledge the fatal flaws in his decision-making.”

However, to make the quick switch from media mogul struggling to maintain control of his empire on Succession to conflicted U.S. president in the play, the 73-year-old Scottish stage and screen veteran had to draw on his experience playing epic Shakespearean roles in order to be able to prepare for a part of this size.

“I kind of called on a former character of my younger self who used to do this kind of stuff in the theater,” said Cox, who was last on Broadway in 2011 in That Championship Season and hasn’t been onstage in four years. “My experience — how to prepare, how to learn the role, how to get the role — going back to muscle memory, which is stuff that I haven’t used for years.”

“I tend to go back to Scotland and do plays there quietly, so nobody can see me,”  he added. “But you know in this case, I couldn’t do that.”

The Hollywood Reporter spoke with Cox about juggling Succession and Broadway, what Logan Roy and LBJ have in common, his new film The Etruscan Smile and what keeps him coming back to the theater.

You drew on your background playing Shakespearean roles for this part. Do you see anything epic or Shakespearean about playing Lyndon B. Johnson and Logan Roy?

I think when you get into older parts, they do have that, because they have a heritage about them. It’s the same in Succession. Succession has got a lot of Lear in it. There’s a lot of those kind of influences in it.

Thirty years ago, playing these sort of epic roles like King Lear, Titus Andronicus, Petruchio in Taming of the Shrew, and of course Johnson has that dimension and that’s what I sort of called upon. It’s very Shakespearean in its structure and also [playwright] Bob’s very influenced by Shakespeare. Johnson, he has to motor the play. It’s not just learning the lines, it’s the fact that you can’t pause, you have to keep it going. It’s an onslaught. It’s what he says: “Check your grip. Hold on tight. Here we go.”

What made you come back to theater after some time away?

Well, it’s the role, it’s the play. This is a gift. Especially at my age, to be playing these kind of roles again, and also I’m in shock at my own stamina. That’s the thing that gets me more than anything else, that I’m still able to get up there and do it. It’s a huge, huge nightly surprise, and I think, “Oh, my god, I got through it tonight, that’s amazing. Oh, and I’ve got to do it tomorrow!”

Do you have any special pre-show routine to make sure you have the energy to get through it each night?

I just prepare. I meditate. I give myself the time. It’s a full-time job and I take all the pluses of being older. I use them and milk them for all they’re worth.

What are some of those advantages?

In The Great Society, you’re playing a former American president, and you’ve played other American historical figures, like J. Edgar Hoover. Is American history something that interests you as an actor?

I think it’s ill-served, American history. That’s why I love this play and I love Bob Schenkkan’s work and I encourage more of it. I grew up with a lot of those people, you know, American kids who were faced with Vietnam, and it’s very interesting to have this historical perspective. I always had a predilection towards Johnson, because he looked very much like my late father. There was a physical similarity between them.

He’s really redressed history, because we wouldn’t have the kind of social conditions that are prevalent in the state now — poverty programs, Voting Rights Act — all of that is as a result of Johnson. And what he’s now become — the conspiracy at least — is the tragedy of the flaw of Vietnam, which is also a problem Americans have in understanding. It’s something at the moment with Trump’s withdrawal out of Syria. And it’s a bloodbath. He’s leaving a bloodbath, because, whether America likes it or not, historically the country sets itself up as this sort of world’s police. You can’t just throw that responsibility off overnight. 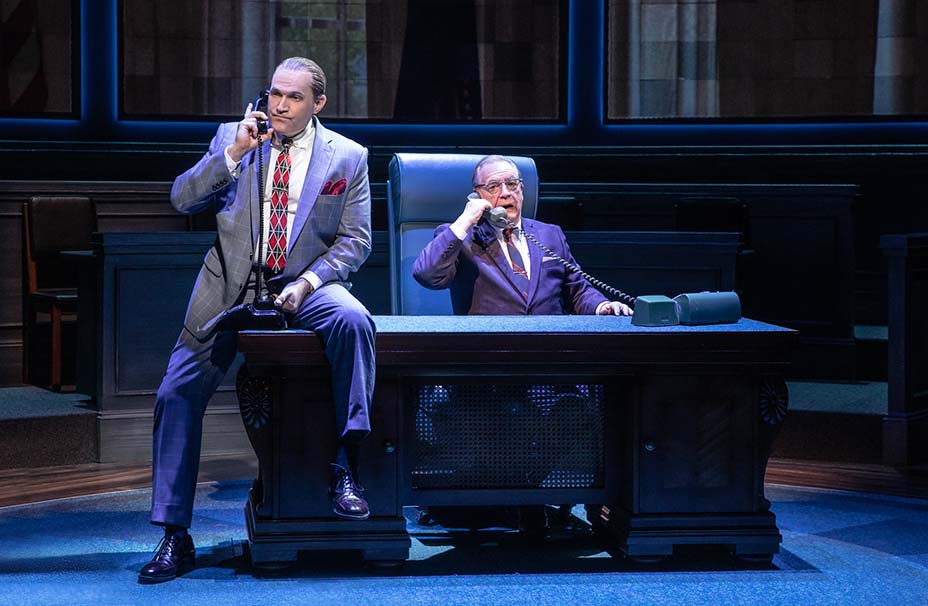 There are a lot of parallels in the play to what’s happening right now as we approach another presidential election in 2020. What is it like for you to play an American president in this climate?

The synchronicity of what’s happening and what the play is about, it’s quite something. It’s really quite extraordinary. We have a Mussolini figure running the place. So it’s just an interesting reminder of a man, who had these problems and he did a lot. But there was an integrity there, which has been lacking, you know. And it’s that integrity and actions trying to empower people. You don’t see this man that’s pressing down empowering anybody — except himself, obviously. He’s his own advocate. It’s kind of odd, but this play is a reminder of the aspects of America which are virtuous.

Do you see any similarities between LBJ and Logan Roy?

Only in the fact that they’re self-made men. There’s all the didacts and that’s the difference. Logan is much more disenchanted, which means he doesn’t really believe in them as a force. Their sell-by date is well and truly passed. Whereas Johnson has the opposite view. So in that sense, they’re opposites, but they come from a similar root. And it is interesting. If you look at the root of somebody like Logan, who is essentially misanthropic because of whatever mysteries in his life, and we still don’t know about all of them. The disappointment, the thing that’s driven him to say his favorite quote from Shakespeare, which he says in the Pierce episode where he goes to Long Island: “My favorite Shakespeare is ‘Take the f—— money.'” But that’s Logan. At the same time, he comes from a sort of rough background, as definitely Johnson did. So in that way, there’s a similarity, but apart from that, the similarity ends.

Can you talk a little about your film The Etruscan Smile, which comes out in November?

Oh my movie! I keep forgetting about my movie. Got to remember that … it’s a life-affirming story. Ultimately, it’s about making a good death. But it’s also about culture clash. What they’ve done is taken a guy from the north of Scotland and brought him down to San Francisco to see his son. The father that I play, Rory, he’s got cancer and, you know, he’s been living off morphine pills from his friend, who’s a vet. And he realized he’s got it coming, and also he knows that he needs to make some peace with his son. And then he’s got a grandson, and he develops this relationship with his grandson. It’s about him and this 10-month-old boy. It’s very sweet. It’s very touching, very touching. The little babies are wonderful.

We’ve played a few festivals, and it’s been very successful. It’s one of the great things about cinema, which really annoys me … then it’s very interesting this whole debate going on with Martin Scorsese. They’ve been very kind to me, the blockbuster films. But what I find hard is the cineplexes have five cinemas. Four of them are playing The Avengers and everyone’s chasing that one other cinema. Audiences don’t get to see these films like Etruscan Smile. And I think it’s awful. We’ve now got Netflix, so there’s that, but there’s still the experience of sitting in a cinema and that was what’s going on with festivals, both in Palm Springs and Stony Brook. You feel the audience. Feeling that communal experience is unlike anything else. 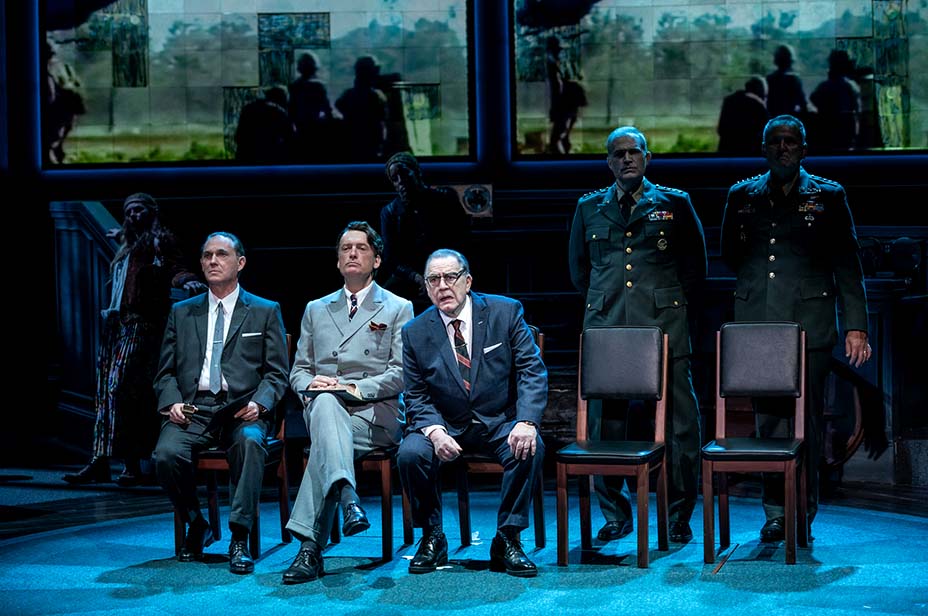