Continue to The Hollywood Reporter SKIP AD
You will be redirected back to your article in seconds
Skip to main content
February 19, 2018 5:00am

A casual glance at this year’s Oscar nominations offers an indicator that Hollywood is in the midst of a love affair with the U.K. But it’s not simply British filmmakers and actors who are proving to be the hottest tickets, with the U.K. itself now a vital — and steadily growing — hub for U.S. film and TV production. Figures released in January from the British Film Institute show that 2017 was the largest year on record for international spending, with film leaping by 23 percent from 2016 to $2.4 billion and TV rocketing 27 percent to $967 million.

As one Hollywood-based senior executive puts it, “There are three main places you now consider shooting: Atlanta, New Orleans and London.”

Indeed, facilities in the capital and across the U.K. are close to their bursting point, with reports that Blade Runner 2049 and Alien: Covenant were forced to look elsewhere because of a lack of space. (THR also has learned that Disney has stages booked at Pinewood Studios — which has become home to not just the Star Wars outings but to a sizable share of the company’s Marvel and other live-action output — for the next five years.) Some of 2018’s biggest movies — Jurassic World: Fallen Kingdom, Ready Player One, Tomb Raider, Solo: A Star Wars Story, Aladdin and Mission: Impossible 6 — have been shot on U.K. soil. Expansions to existing studios are well in progress, while plans for new developments — including a major site in East London — are in the pipeline to cope with the rising demand.

Underpinning the dramatic growth is a tasty tax incentives scheme, introduced in 2006, supported by successive governments and now sitting at 25 percent of qualifying expenditure for both film and TV. But tax rebates aren’t a British phenomenon. What the U.K. also boasts are skilled crews; world-class facilities, postproduction and VFX offerings; nearby talent (both in front of and behind the camera — for those who haven’t fled to sunnier Hollywood climes); and, of course, a common language. “It’s a bit of a virtuous circle of love,” says Nicky Earnshaw, Film4’s acting head of production and formerly a Pinewood exec. “The only negativity is that small productions often find it difficult to get into the studios and compete for crews, but nobody’s complaining. It’s a luxurious problem to have!” 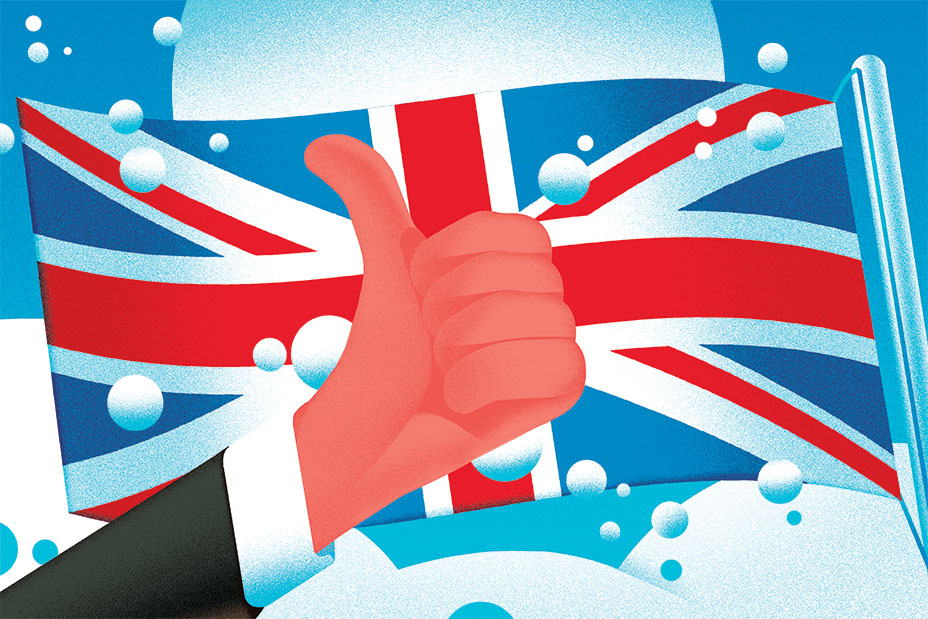 However, there is uncertainty ahead: Brexit. More than a year and a half after the decision was made to leave the European Union, the U.K. is still largely in a state of bewilderment as to how things will play out. But few in the U.K. film sector think it’s a good thing (especially for projects seeking to tap into European Union funding initiatives).

For Hollywood, however, Brexit — so far at least — has only enhanced the U.K.’s appeal. Following the vote in June 2016, the pound immediately plummeted to a 31-year low of $1.20 against the dollar. That meant 20 percent was suddenly shaved off the cost of U.S. productions. “It’s fluctuating a bit higher today, but the truth is that our exchange rate is still extremely attractive, particularly to the U.S.,” boasts Adrian Wootton, head of the British Film Commission. The pound has indeed risen — it was at $1.38 on Feb. 12 — but has yet to reach pre-referendum levels.

“It’s definitely done us no harm whatsoever and is a very strong addition — grab it while you can,” says British Film Institute chief executive Amanda Nevill. But while Hollywood accountants may rejoice, Brexit troubles could lie ahead for areas reliant on labor coming into the U.K. from elsewhere in Europe. “You can feel the whole industry is nervous of two things: movement of material and movement of personnel,” says Working Title producer Eric Fellner.

No segment of the industry understands this more than the U.K.’s bustling VFX community, where about 33 percent of the workforce is European. Like every other element of the film and TV sector, VFX has witnessed explosive growth in recent years, with British companies — led by Double Negative, Moving Picture Co. and Framestore — having won five of the past seven visual effects Oscars and aided by a tax incentive adjustment in 2014 that drew VFX contracts for major films shot outside British shores.

Alex Hope, managing director and co-founder of Double Negative, which is up for an Oscar this year for Blade Runner 2049, says there is an “understanding on the part of everyone” that the high-end talent required will continue to be supported.

“The government recognizes the importance of that,” he says. It’s a view echoed by Neil Hatton, CEO of VFX trade body U.K. Screen Alliance: “We’re not going to see people sent home,” he says, adding that future immigration policies need to maintain the current flexibility to respond to changing deadlines and schedules. “[Right] now, if I need more compositors next week, I can pick up the phone to people I know in France and tell them to be here by Monday.”

As anyone picking up a British newspaper will quickly understand, very little to do with Brexit is clear. But despite concerns regarding the movement of labor, few have any fears of a major wrench being thrown in the wheels of U.K.’s continued growth as a global production hub.

“The whole industry has been working hard to ensure the government understands, in the context of Brexit, the importance of the U.K. remaining an open and positive environment for investment and content production,” says Josh Berger, U.K., Ireland and Spain president and managing director for Warner Bros., whose expanding Leavesden studio has provided a home for the Harry Potter franchise. And with the ongoing drive for high-end TV and the billions pouring into production from streamers, the issue isn’t so much whether the U.K. can maintain its magnetism for Hollywood as whether its studios have the space.

“As far as I can gather, they’re jammed,” says Duncan Clark, head of Universal Pictures International. “And I can’t see that changing.”