Continue to The Hollywood Reporter SKIP AD
You will be redirected back to your article in seconds
Skip to main content
October 28, 2019 5:22am

Early Monday, a brush fire broke out along the west side of Interstate 405, north of Sunset Boulevard and near the Getty Center in Southern California.

As of 6 p.m., more than 618 acres had burned. The fire is five percent contained. So far, there have been no reported injuries.

The southbound Interstate 405 from the U.S. 101 to Sunset Boulevard was closed around 8:30 a.m. Around 8:50 a.m., the southbound lanes of Pacific Coast Highway from Temescal Canyon were closed. However, as of 10 a.m., the PCH closure at Temescal Canyon Road had been lifted. Yet, Topanga Canyon remained closed to non-residents from PCH to Mulholland Drive.

The fire started around 1:30 a.m. The cause is unknown. Strong winds pushed the blaze to increase in size at a rapid rate. At least eight homes have been destroyed, according to authorities, who stressed that residents in the area needed to obey the evacuation orders. About 600 firefighters are battling the blaze.

Multiple entertainment industry members who live in the area said that they were affected by the blaze. Los Angeles Lakers star LeBron James tweeted that he had to evacuate his home because of the fires. Showrunner Kurt Sutter took to Instagram to indicate that he was affected by the fire. Glen Mazzara, the former Walking Dead writer-executive producer, currently working on Amazon’s The Dark Tower, tweeted that he’d been evacuated.

Actor and former governor Arnold Schwarzenegger also had to evacuate. “We evacuated safely at 3:30 this morning. If you are in an evacuation zone, don’t screw around. Get out. Right now I am grateful for the best firefighters in the world, the true action heroes who charge into the danger to protect their fellow Californians,” Schwarzenegger said via Twitter.

“In light of the ongoing, active fires being battled in the area, Paramount Pictures and Skydance have canceled tonight’s Los Angeles premiere of Terminator: Dark Fate. We will be donating food intended for the after-party to the American Red Cross, which is serving those affected by the fires,” Paramount said in a statement. 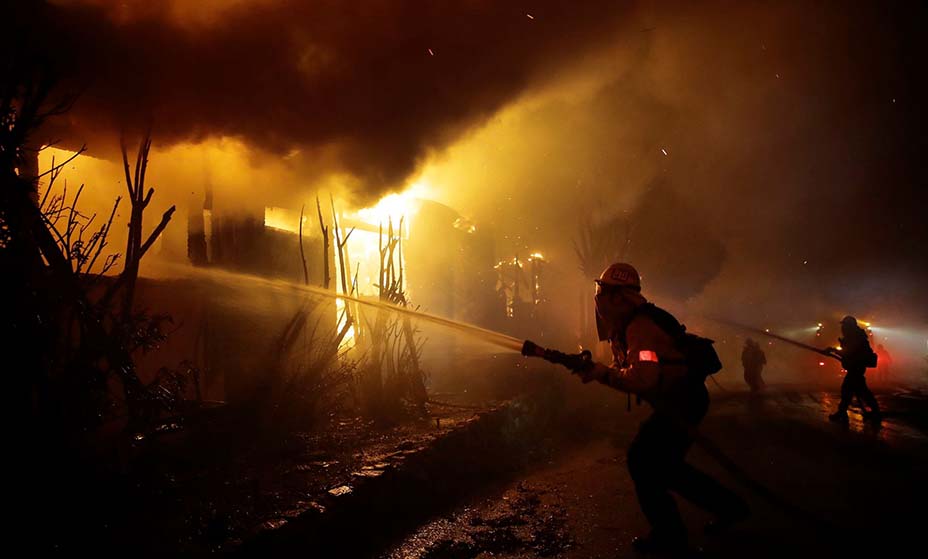 The University of California, Los Angeles cancelled all Monday classes.

The LAFD called the fire “a very dynamic situation due to high winds” and issued mandatory evacuation orders affecting more than 10,000 structures (both residential and commercial) in western Los Angeles County, according to LAFD Capt. Erik Scott. The evacuation area extends from Temescal Canyon Road in the west, Sunset in the south, Mulholland in the north and the 405 in the east.

At 7 a.m., Los Angeles Mayor Eric Garcetti tweeted, “I’m signing an emergency declaration immediately for the #GettyFire to help bring more resources to support our @LAFD in fighting this fire.”

Mount Saint Mary’s University tweeted that students at its Chalon campus near the museum were evacuated to another campus and classes were canceled for Monday. The Getty itself was designed with fire protection in mind, with thick walls and doors to compartmentalize any flames, and Scott said it wasn’t threatened.

#GettyFire Winds are picking up and this remains a very active and dynamic situation so please follow local media and visit https://t.co/766U4tVd9z for the latest info #LAFD pic.twitter.com/klZEdJHbsA