Four years after winning the Tony Award for best actor in a play for his electrifying performance as Lyndon B. Johnson in All the Way, Bryan Cranston will return to Broadway this fall in the iconic role of Howard Beale, the “mad prophet of the airwaves,” in the broadcast news media satire Network.

The play was adapted for the stage by Lee Hall, based on Paddy Chayefsky’s screenplay for the classic 1976 Sidney Lumet film that won four Oscars, including best screenplay and a posthumous best actor award for Peter Finch, who played Beale. Cranston won an Olivier Award for his performance in the role at London’s National Theatre, where it premiered last November.

Chayefsky was prescient in his scathing view of network television’s unscrupulous hunger for ratings, as executives exploit the mental breakdown of a seasoned news anchorman who becomes a populist folk hero with his angry on-air rants about the state of the nation. The work’s portrayal of a media landscape in which opinion eclipses fact now seems all too believable in Trump’s America, where reality TV and allegations of fake news dominate.

Belgian experimental director Ivo van Hove, who won a Tony in 2016 for his high-intensity take on Arthur Miller’s A View From the Bridge, staged the acclaimed multimedia production. It transfers from London to Broadway’s Cort Theatre, beginning previews Nov. 10 before a Dec. 6 official opening.

Reviewing the production for The Hollywood Reporter, critic Demetrios Matheou wrote: “It’s bold, intelligent, funny, with a conceptual and technical swagger that is sometimes quite breathtaking.” He also praised Cranston, noting that the actor brings “his usual acumen and charm, and a face that he plays like a Stradivarius.”

While the London premiere also starred Michelle Dockery and Douglas Henshall in the roles played in the film by Faye Dunaway and William Holden, no casting beyond Cranston’s has been confirmed for the Broadway run, which is produced by David Binder, The National Theatre, Patrick Myles, David Luff, Ros Povey and Les Menzies.

“The incomparable Bryan Cranston brings Howard Beale to brilliant life and we are thrilled for American audiences to have the opportunity to experience his masterful performance and this spectacular new play,” said the producers in a statement.

Set and lighting design are by van Hove’s longtime collaborator Jan Versweyveld, with video by Tal Yarden, costumes by An D’Huys, and music and sound by Eric Sleichim. The production joins what is shaping up to be a busy season for new plays, and will be eligible for consideration at the 2019 Tony Awards. 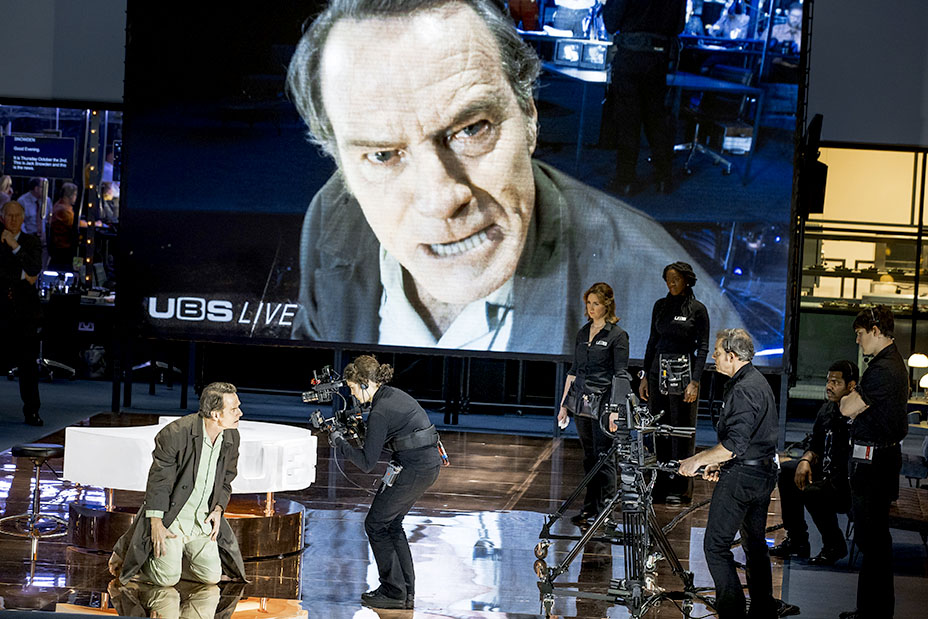