“Prudential Center is a really historic place for us,” BTS frontman Rap Monster, aka RM, said during the South Korean boy band’s Saturday night show at the Newark, N.J., venue. Visibly emotional, he added, “It’s one of the first big arenas we ever played in the U.S.”

The crowd — a diverse group of tweens, parents and adult K-pop enthusiasts — erupted in ear-shattering screams, a signal of excitement and praise expressed throughout the majority of the two-hour spectacle. It was apparent that the arena’s 18,000 fans, many of whom came out to see the seven-piece band’s first two New Jersey shows in March 2017, were overjoyed to see the boys back in the Garden State. According to fans who also attended BTS’ Friday night concert, the atmosphere was full of equal elation.

Like their last visit to the Prudential Center, BTS (an acronym for “Beyond the Scene”) sold out two nights in a row, 36,000 tickets in total — a feat achieved faster than any of New Jersey legend Bruce Springsteen’s homecoming concerts at The Rock. In the year and a half that’s passed, the group — including rappers RM, Suga and J-Hope and singers Jungkook, Jimin, Jin and V — have launched K-pop into America’s collective consciousness, thanks to their two No. 1 albums on the Billboard 200, a handful of electrifying awards show performances and a recent string of charming talk-show appearances.

The second BTS hit the stage Saturday for their opening number — a dynamic performance of their latest single, “Idol,” featuring intense dancing and eye-catching pyrotechnics — audience members immediately jumped to their feet (and seemingly didn’t sit down for the remainder of the show). In the general admission pit, an assembly of fans breathlessly executed BTS’ choreography, mirroring the young men move for move.

The same amount of enthusiasm was felt throughout the entire evening. When concertgoers weren’t dancing along with BTS, they were shouting the band’s name in unison or chanting back their mostly Korean lyrics in a resounding sing-along, whether or not they were fluent in the band’s native language. The love shared between BTS and their fans was certainly not lost in translation and evident was the fact that RM and his six bandmates fed off of the crowd’s palpable energy.

After dancing their hearts out to some of their most beloved tracks — such as “Euphoria,” “DNA” and “Fake Love” — BTS slowed things down for a section of ballads where they showcased stunning vocals and an even more impressive level of vulnerability. In the middle of their piano-driven hit “The Truth Untold,” V was moved to tears. At one point, the band’s resident blond was unable to join in on the song’s refrain as he took a beat to dry his eyes, a touching moment captured for everyone to see on the stage’s multiple jumbotrons. An emphatic chorus of “aww”s could be heard throughout the venue. 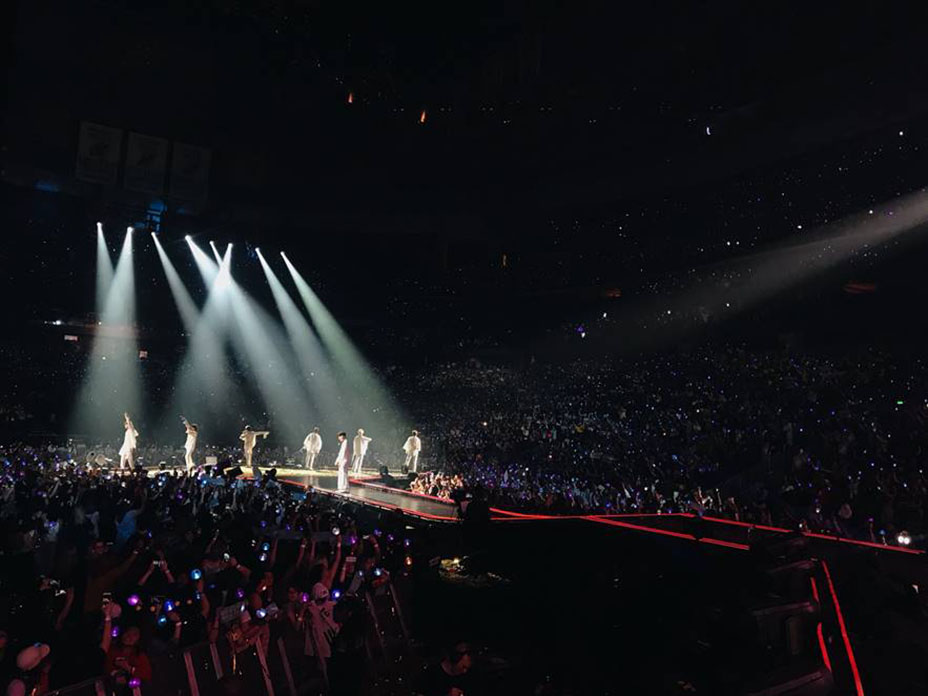 Before BTS bid farewell to their audience Saturday night, the guys made sure to share their gratitude for yet another successful two-night stint in New Jersey. Following their performance of “Anpanman” — a Fetty Wap-inspired crowd-pleaser, and the second to last number in their nearly 30-song setlist — RM encouraged his bandmates to “talk about how we feel” during a 10-minute address to their ever-loyal #BTSArmy.

“It was a true celebration tonight, right?” RM asked fans, while Jungkook said through a translator, “You guys made this a night I will never forget. This is our fourth time coming to the Prudential Center, but this time was the best.”

“We’ve been together a few times now, but it always feels new. This week, we had many promotional appearances and events,” J-Hope continued, likely referring to BTS’ Sept. 25 speech about self-love at the UN for UNICEF’s “Generation Unlimited” launch, and their subsequent interviews on The Tonight Show and Good Morning America. After the whirlwind of work commitments, J-Hope admitted that he had been looking forward to performing again for his fans in New Jersey: “But you guys are my sunshine and my hope. Thank you, Newark.”

Aside from two dates in Chicago this week, next up is BTS’ history-making show at New York’s Citi Field on Oct. 6. Not only are they the first K-pop act to host a stadium concert stateside, but the group managed to sell out the 42,000-person venue in under 20 minutes. The Queens show will mark the end of BTS’ North American leg of their Love Yourself World Tour, which kicked off Sept. 5 at the Staples Center in Los Angeles.