Continue to The Hollywood Reporter SKIP AD
You will be redirected back to your article in seconds
Skip to main content
June 22, 2018 7:00am
Logo text

Busy Philipps is busy this summer.

She’s got two young daughters — Birdie and Cricket — who are out of school on break already, and her screenwriter husband, Marc Silverstein, is always at work with a new project or two. Everyone in the family has a birthday in the coming weeks, so there are parties to plan and Instagram stories to update for her 1 million followers.

She also is readying to be busy almost every night with Busy Tonight, her new E! talk show, which is set to debut this fall. The Hollywood Reporter caught up with Philipps about her plans for the series, what details got axed from her new book This Will Only Hurt a Little and why it does not hurt at all to be in business with Red Baron pizza right now.

Let’s talk about pizza. No, actually, pizza is cool, but let’s talk about this new partnership you’re doing with Red Baron. The company is delivering free groceries to parents as part of a new campaign, and you said this is coming just at the right time. Tell us about that.

Most kids have been out of school for two weeks now and this is the point when most moms and dads lose their minds and fall behind on grocery shopping. Or you’re just running out of things to do — just basically frazzled and had it. Red Baron is giving 5,000 parents free groceries and delivery through Instacart. Go on to the Red Baron’s Facebook page where you can enter, and share parenting war stories. I love it. I have two kids and a really busy life, and I frequently rely on frozen pizza and Instacart, so this feels like a very natural partnership for me. 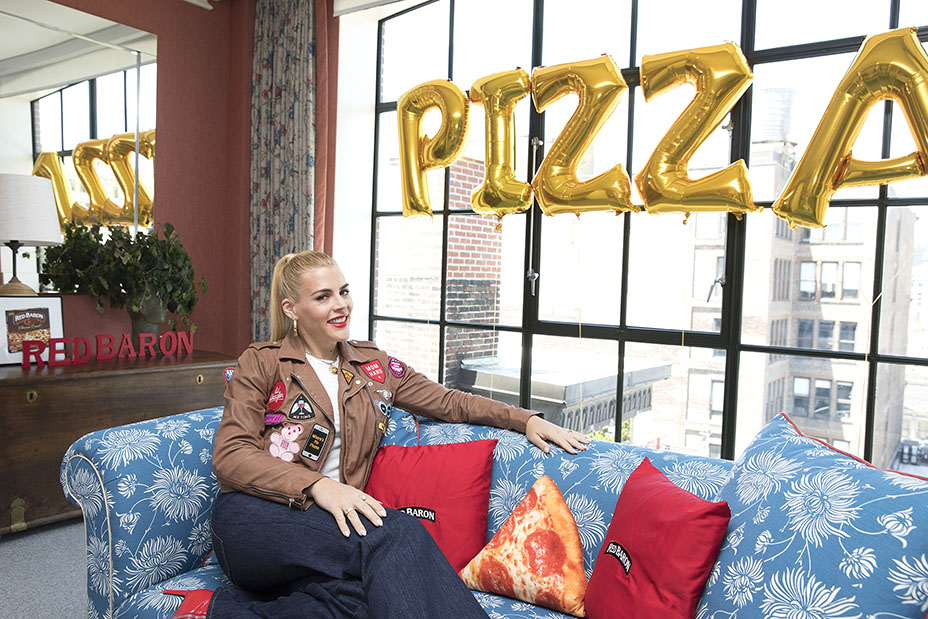 What are your personal parenting challenges right now?

It’s so crazy now that I’m so young and my children are getting so old. My oldest daughter, we have to regulate screen time and regulate how many times she’s allowed to say that she’s bored. Those two things are always in concert with one another. We try to find camps that the kids will be interested in and is something that they want to do. We try to find activities in and out of the house. Pools are always good, so if you live somewhere with a pool or have access to a pool, that’s an amazing thing to have, just to fill two hours. For us right now, everybody in the family has a summer birthday, so we’re planning around those. I’m up first (June 25), then Marc (July 1), then Cricket (July 2) and then Birdie’s birthday (August 13).

Congrats on the memoir, This Will Only Hurt a Little. I see that you posted the book cover today and there’s now a release date, Oct. 23. You’ve said that it will trace your life’s journey and include a lot about working in Hollywood. What can you tell us about that specific portion of it and what was the hardest part to write?

It’s been a really interesting time both to be a woman and to be a woman in Hollywood in these last almost two years, politically with all that has happened. I’ve been working in this industry since I was 19 — this was in the late ’90s — and a lot has shifted since then, almost seemingly overnight when the dam broke. I had started writing the book before October [when Harvey Weinstein allegations first broke], but a lot of it will recount my time in Hollywood starting in this business. During that time, there were a lot of standards and unrealistic expectations set for me about what it means to somehow fit in as a woman. There were people who wanted me to make myself less myself in order to fit certain roles or unrealistic molds. This is low-grade sort of objectification, and you know, harassment that existed on sets at the time. Like, as far as I could see, if you wanted to be a woman and you wanted to work, you had a choice to be easygoing about it or not. I wanted to work, that was always my goal. If that meant laughing off a joke at my expense, so be it. That’s what I was going to do. I’m so excited about the future and so heartened by women who have come forward with [accounts of] horrible abuse and misuse of power. That will hopefully trickle down to 19-year-old actresses not feeling like they have to go on crash diets to cover up things that make them themselves.

Ok. NOW I CAN POST IT. HERE is the cover and title of MY BOOK!! It comes out in October but you can pre-order now at busypbook.com (link in profile). Everyone tells me pre orders are the most important thing but I don’t know about that! All I know is I’ve worked so hard on this book, I’m really proud of it and I can’t wait for you all to read it! Cover shot by the incredible incomparable @autumndewilde with glam by my ROD @kmannmakeup @karlawelchstylist @bobbyeliot @kristisword. Book is being released by @touchstonebooks #thiswillonlyhurtalittle

Further congratulations on your new E! show Busy Tonight, which is notable for the inclusion of another female voice in the late-night landscape. What do you regularly watch on late-night, and do you have any inspirations for what you want to do?

I watch a ton of late-night, and more since I started working on the concept for this show. I’ve also known Seth Meyers for a long time — his brother is one of my closest friends in L.A. I’m friends with Molly [McNearney] and Jimmy [Kimmel]. I love all of those shows so much. In terms of the once-a-week late-night shows, those are more politically bent, and very vital at this moment in time. Our goal [with Busy Tonight] is to do more of topical entertainment, pop culture-type show — something that fits in with the network and fits in with my voice and the kinds of things that I talk about on my Instagram stories. We should know by the end of this month if we’re doing a three-night-a-week show or if E! will start us out at one night per week. My preference is really three nights per week to get a rhythm going. … We will be doing the traditional opening monologue a bit differently. It works for stand-ups and certainly everyone on Twitter is doing those sort of monologue jokes all day long. I bring something different to the table in my perspective, so the opening will reflect that. I also just like talking, in case you can’t tell.

You’ve got the book and the show up next. Any new acting projects?

I’m not really focusing on auditioning right now. Jenni Konner and Lena Dunham asked me to do an episode of Camping and I love them so I did that. The episode is really fun. I did a couple of episodes of Unbreakable Kimmy Schmidt for Tina [Fey] and Robert [Carlock]. I guess I’m at a place where if someone wants to ask me to be in something, I will consider it (laughs). I can’t get my head around auditioning for things right now. I read some pilots this year, and nothing made me feel like, ‘I have to be a part of this’ or ‘I absolutely must play this role or character or I’ll sink into oblivion.’ I’ll focus on [Busy Tonight], and I think it’s a good idea to do this thing the best that I can and focus all my energy there.