Americans are cutting the cable cord at an alarming rate, and it could get worse. At least that’s the message from second-quarter earnings reports, and Wall Street appears a bit spooked, with shares of Comcast, Charter Communications, Dish Network and AT&T (home of DirecTV) all down in the first week of August.

Craig Moffett at MoffettNathanson estimates a whopping 941,000 subscribers cut the cord during the quarter, up from 809,000 in the same time frame a year earlier, a clear indication cord-cutting is accelerating. “The rate of pay TV subscriber erosion worsened, rising sequentially from 2.5?percent last quarter to 2.7?percent in the second quarter, the fastest rate of decline on record,” notes Moffett.

Salman Rushdie Off Ventilator and "on the Road to Recovery" After Attack, Agent Says

The major providers have been countering the decline with skinny bundles of TV channels online through services like DirecTV Now and Sling from Dish, but even there they are competing with such upstarts as PlayStation, YouTube and others. Dish might be in a particularly precarious position given its reliance on cut-rate packages to draw new customers. Even with Sling, the satellite provider lost 261,000 subs year-over-year.

For the most part, cable has fared a little better than satellite, and Moffett sees that trend continuing.

“Satellite operators can’t offer a competitive lineup of VOD, and their one-way-only programming guides are increasingly disadvantaged in an age of two-way interactivity,” he says. “Making matters worse, cable’s ability to bundle broadband means that satellite ends up being more expensive than cable.”

“Growing a subscriber base by adding low-quality subs that are likely to churn is not a great strategy,” says Ben Weiss, chief investment officer at 8th & Jackson Capital Management.

Of course, broadband subs keep climbing for cablers, making up for some video losses. At Charter, for example, residential TV subs dropped 288,000 to 16.65 million in the past year while Internet subs rose 1.37 million to 22.03 million. And Comcast, the granddaddy of cable providers, managed small year-over-growth in video (up 74,000 to 21.48 million) but enjoyed a heftier surge in high-speed internet (up 1.18 million to 23.36 million).

“That’s why the headline quarterly numbers are not necessarily reflective of the long-term competitive position and sustainable cash generation potential of the large connectivity companies,” says Weiss.

Adds Moffett: “If there was any surprise, it was only that the carnage this quarter came up short of the worst-case scenarios.” 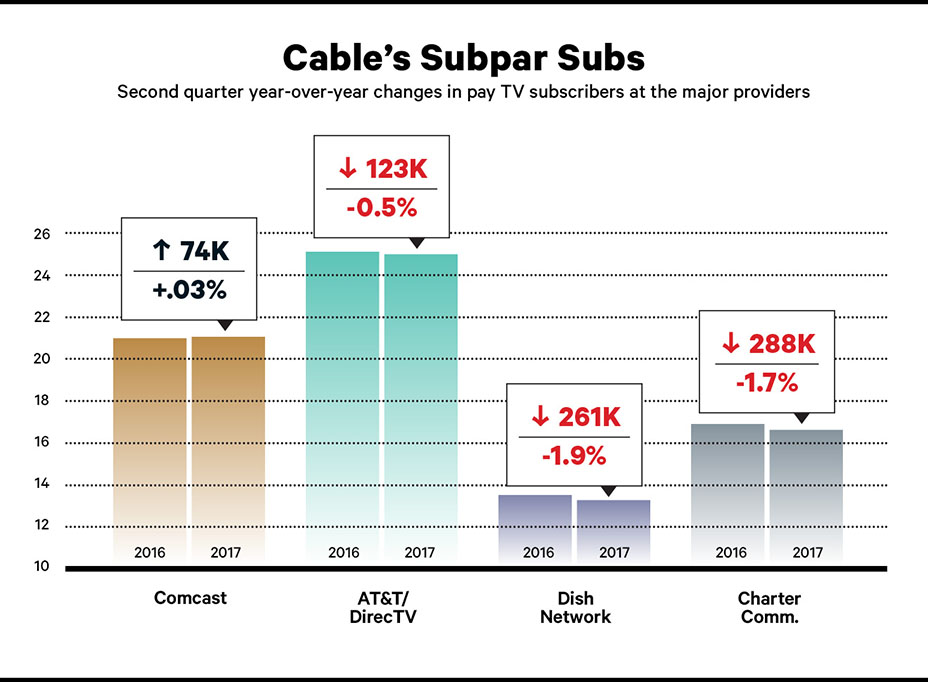