VALLE DE GUADALUPE Rihanna was the biggest thing to happen to this village, about a five-hour drive from L.A., when she visited the formerly sleepy ranchero-filled wine-producing valley. It’s been steadily gaining a reputation as a south-of-the-border mecca for adventurous foodies and wine lovers, but since the singer took over the luxe-minimalist Encuentro Guadalupe “anti-resort” (rooms from $380) in 2014, the area has seen industry visitors including Diego Luna, Drew Barrymore and Emily Ratajkowski.

“The new Baja food scene blended with extraordinary wines is a combination that is hard to find in other regions,” says Fernando Castro Perez, owner/winemaker of La Lomita winery and TrasLomita restaurant, of the appeal. He’s also seen Gael Garcia Bernal, Ricky Martin and Karla Souza around. “It’s very reclusive. We cannot forget it is a rural Mexican village with people who are working in the field or minding their own business, so out here Hollywood celebrities are treated like anybody else.”

Rihanna’s favored property boasts a private wine cellar where guests can request a secluded farm-to-table, wine-paired dinner for two. Revered El Cielo Winery (which boasts pristine valley views) just opened the first couple of luxury villas (from $430) — secluded among grape vines — for its future boutique hotel, open fully by the end of the year. And by popular demand, the intimate, sustainable, Alejandro D’Acosta-designed Clos de Tres Cantos winery debuts two guest rooms in May (from $250), which come with a bottle of vino and private behind-the-scenes wine tour. Bruma Valle de Guadalupe winery, too, launches its first restaurant this summer, and for accommodations, two private pool suites at Casa Ocho (from $285).

Where Hollywood Hangs in Mexico City: A Weekend Guide

The cuisine scene is headed up by chef Diego Hernandez of the hyperlocal gastronomical gem Corazon de Tierra, who this March opened Verlaine in West Hollywood. His ever-changing menus are informed by the season and improvisation, and the kitchen is sympathetic to nitpicky diets or even vegans. “We have a lot of people coming from L.A. to the valley, from both the entertainment and restaurant industries,” says Hernandez. “Most drive, but some also arrive by helicopter.” A further local attraction: a wave of food trucks that feel fresh and modern, like the torta-serving Airstream at favorite eatery Finca Altozano, and Telefonica Gastropark, a culinary commune from Tijuana that just opened a weekend-only location in the Valle. Adds Perez, “One of the main attractions is that it doesn’t feel like a tourist destination. You don’t feel forced to follow a pattern; you are on your own. I guess that is one of the most valuable things to have when you are a celebrity.”

Mexico’s wine country is also home to the Guadalupe Valley Wine, Food and Music Festival on September 15 at Decantos Vinicola. Held at a 20-acre family-run winery, the festival — which caps at 1,500 attendees — showcases 15 local wineries, music and food from internationally renowned culinary masters including L.A. chefs Guelaguetza’s Bricia Lopez and E.P. & L.P.’s Louis Tikaram, among others. 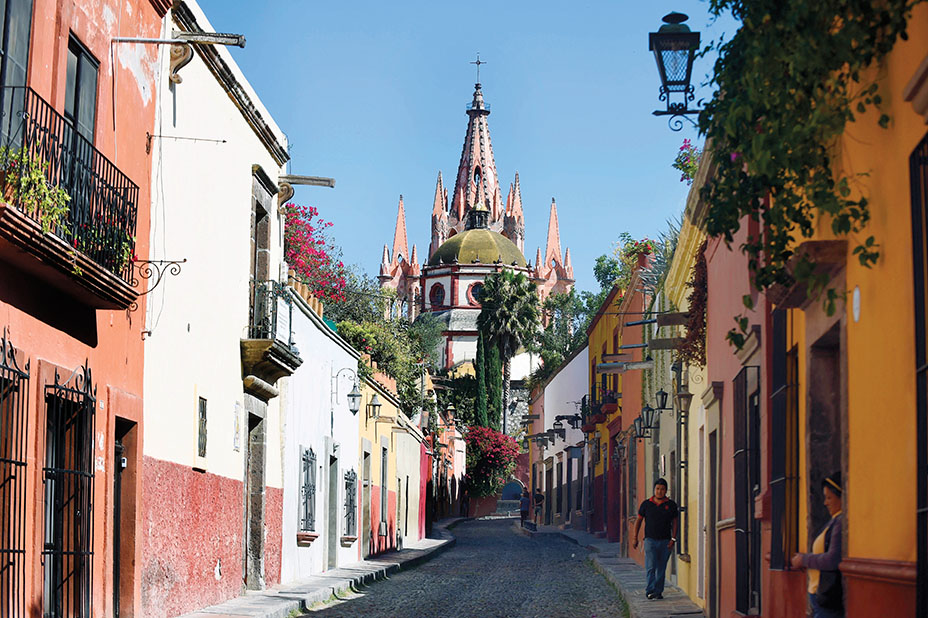 SAN MIGUEL DE ALLENDE The charming colonial town (a seven-hour flight plus 90-minute drive from L.A.) has drawn in Eva Longoria, Antonio Banderas, and Elizabeth Banks and her producer husband, Max Handelman, among many others. “I’s a magical, enchanting place with about 17 colonial period churches and cathedrals,” says international interior designer Michelle Nussbaumer — whose former L.A. shop was a go-to for Sharon Stone and Robert Downey Jr. — of the place where she owns a second-home hacienda, the site of many a fabulous dinner party. Her top tips: margaritas at sunset on the Rosewood Terrace, and a private bath at the grotto, with tequila and local artisan cheeses. Her biggest piece of advice: “If you’re lucky enough to know the right people, there are many beautiful haciendas to see and enjoy.”

The popular property and the Edenic art-filled Hotel Matilda (from $409) — where Lorde and her entourage have crashed — are co-sponsoring a dynamic new arts and food festival July 13-16 called MAG, Market of Arts & Gastronomy, featuring dozens of tasting booths, events and chefs including top toque Enrique Olvera. Based in Mexico City, he says San Miguel is close enough to visit on weekends, but “it gives me the feeling of being in a totally different and faraway place.” The executive chef of Matilda’s popular Moxi restaurant adds of the town, “It’s small, quiet and relaxed, and an environment with great local and organic produce.”

San Miguel is also home to Casa Dragones, the premium tequila label based in a 17th century stable turned exclusive tasting room where Martha Stewart and Ryan Seacrest have sipped the pricey spirit. (Tastings are by request.) In the same tony neighborhood, L’Otel opened the sustainably minded Doce 18 Concept House (from $375) in November, with 10 bright, singularly designed suites, a pool and amenities designed in partnership with local beauty brand Ablu Botanica. 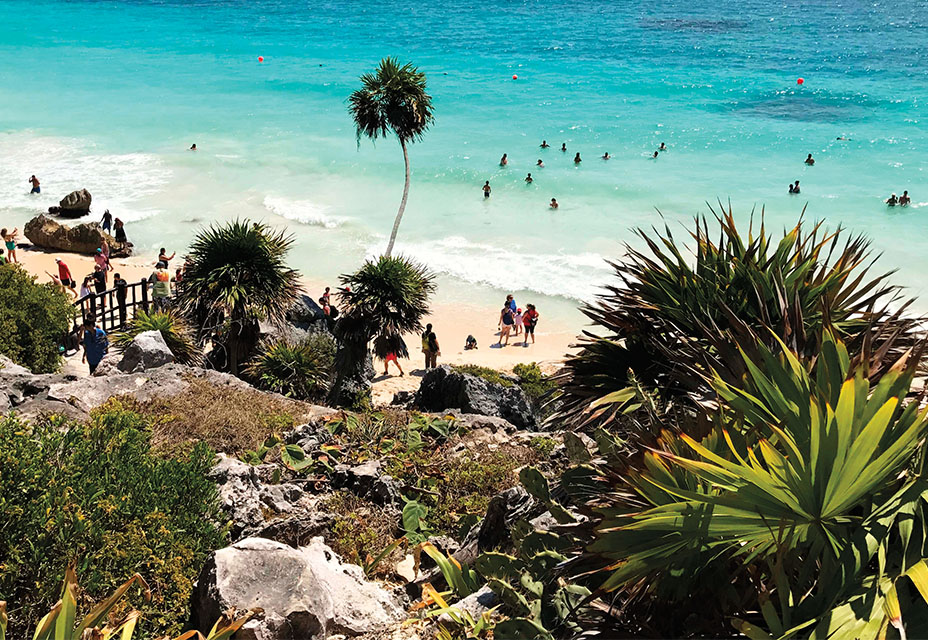 TULUM When destinations are being called the “next Tulum,” you know a place has reached a certain pinnacle. But the boho-hip haven and nearby Playa del Carmen have not jumped the shark. Proof: Noma — the traveling pop-up restaurant by legendary Danish chef Rene Redzepi — chose the jungles of Quintana Roo as its latest destination (Tokyo and Sydney were the last two), partnering with local nonprofit Traspatio Maya to gain access to exotic indigenous crops from around the Yucatan Peninsula (think wild bee larva). Tough $600-per-person dinner reservations are being made through closing May 28.

Nearby the Rosewood Mayakoba (rooms from $875) has lured such guests as Mila Kunis, Ashton Kutcher and Paul McCartney. The resort just debuted Aqui Me Quedo, a new gastronomic-focused beach retreat for icy-cold coconut cocktails and citrus-y ceviche. Also in the exclusive complex is the four-month-old Andaz Mayakoba (from $450), where a golf hall-of-famer recently had a private cooking class at El Pueblito Cooking School.

Otherwise, Gjelina-esque Hartwood continues to be the dinner spot, says celebrity stylist Djuna Bel (who’s worked with Ryan Gosling and Charlotte Gainsbourg), who was there in March with her boyfriend, designer Nikolai Haas and Nasty Gal founder Sophia Amoruso. (Bel orders the wood-fired beets, ribs and fresh fish.) Other hot spots where Bel runs into industry friends: Sanara Tulum’s restaurant, The Real Coconut, for “the best avo toast, the most amazing smoothies and milkshakes, insane nachos,” and Gitano, a “super fun, romantic spot with great music and easily some of the best mezcal drinks I’ve had in my life.” Those who are into activities beyond beach lazing love swimming in the cenotes, visiting ruins, having temescal ceremonies and clay massages.

At Hotel Esencia (from $615) — where Jason Wu married Gustavo Rangel, and spent the holidays alongside Diane Kruger, Kate Bosworth, and Rebecca Romijn and Jerry O’Connell — the organic Mayan spa is a major draw, the most popular bespoke treatment being the Stress Relief Massage (which uses copal incense, bunches of aromatic herbs, a house-made tonic and spice-stuffed heat packs). Says Wu, “Kevin Wendle (an Emmy-winning producer) has created this immensely chic hotel on the most incredible stretch of beach, all of which comes together to create a beautiful and relaxed vibe. You find yourself constantly wanting to return.” The luxe 50-acre property, midway between Tulum and Playa del Carmen, has indeed become an industry favorite in the two years since Wendle refurbished it: Gwen Stefani and Blake Shelton, Robert Redford, Suki Waterhouse and Brad Weston have recently flocked to enjoy the pristine Caribbean sea and Wu’s tequila tastings.