The second chapter of Calexit, the comic book series set in a not-too-distant future where California is attempting to secede from the United States, arrives in stores next week, and it brings a dramatic end to the political career of someone who’s not entirely unfamiliar to watchers of contemporary politics.

As readers of the first issue are aware, Eddie — one of the decision makers in Occupied Los Angeles, a city that’s been under martial law since the re-election of a divisive demagogue president — may share a physical similarity to a certain former White House chief strategist and executive chairman of Breitbart News, but that, surely, is just coincidence. Especially considering what happens to Eddie in the new issue, as can be seen in the exclusive preview below.

“The new issue of Calexit brings with it the death of a central character and another key moment that should present a shocking, and hopefully thought-provoking, new perspective on a major character most readers probably think they’ve already made up their minds on,” writer Matteo Pizzolo explained about the second issue via email.

“Sometimes it’s hard to watch the news cycle without letting public figures become caricatures in our minds, and I think that’s someplace fiction can be helpful. It enables us to examine how the human condition drives people to take such extreme actions like the ones we see playing out every day,” he continued. “As this issue ships to stores, it’s being recontextualized by real-world events in unexpected ways just like the first issue was. … And the sequence being previewed here is particularly unnerving for me to revisit at the moment since it deals with government agents working in coalition with a hate group to arm civilians with military grade weapons, while in the real world we’re watching our government collude with the NRA, whose rhetoric sounds more like a hate group with each passing day.”

Calexit launched last year with coverage from comic book sites to political news sources, and immediately sold out its first print run in its first 24 hours. (It currently is on its third printing.) The series, according to Pizzolo, is “a story about everyday people suddenly finding their neighborhoods occupied by a brutal, tyrannical government, and we’re portraying characters on every side of the situation weighing the consequences of escalating violence to achieve their ends. Our main guide through the world of Calexit is a smuggler who lives by the code that he won’t transport weapons and won’t carry a gun even though he lives and works in a war zone. I think despite the violence in the book and even though several of the characters in the story define themselves by their weapons, one of the central story ideas is that ‘good guys with guns’ are not the solution to our problems.”

Calexit No. 2 will be in comic book stores and available digitally Wednesday. Read on for an exclusive preview of life under occupation…and the fate befalling poor Eddie. 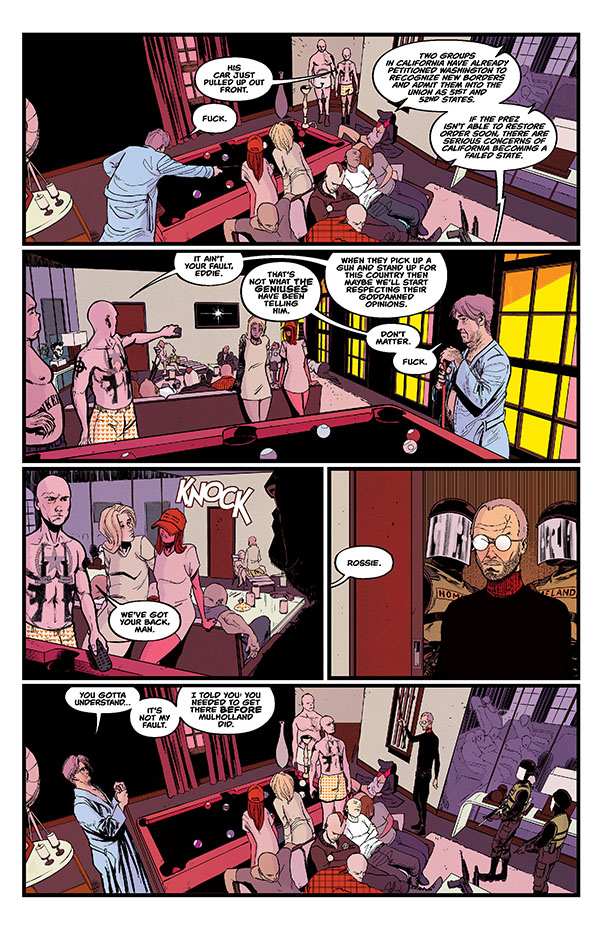 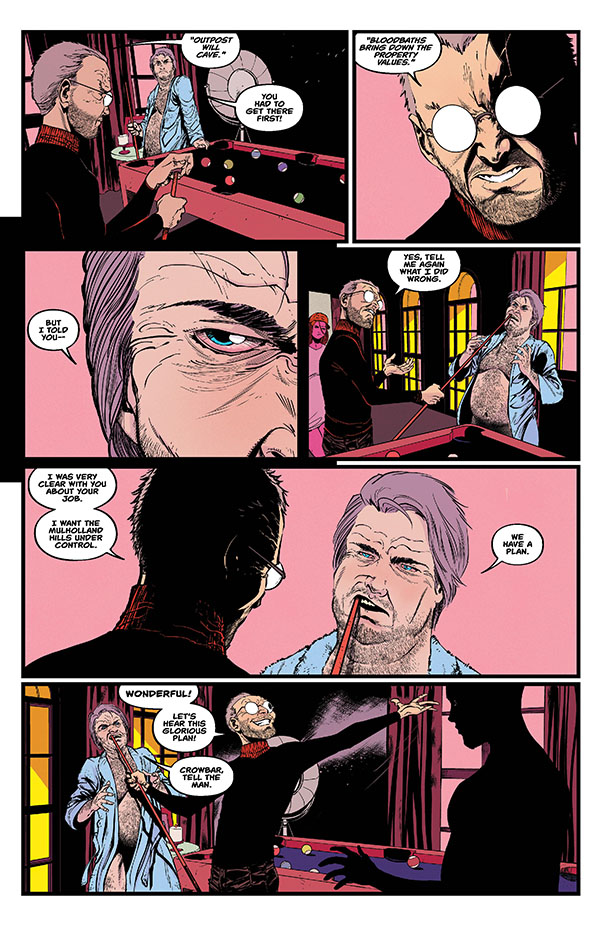 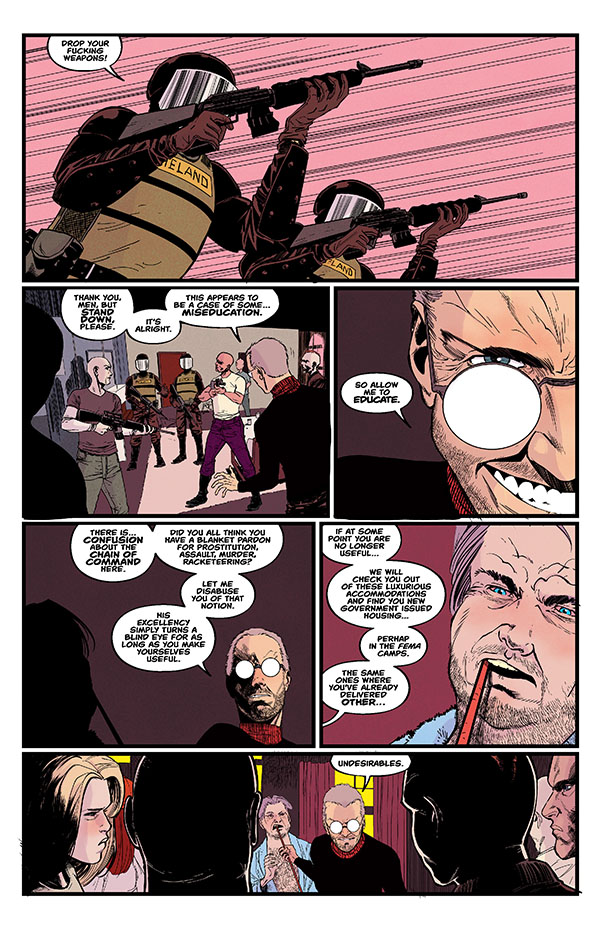 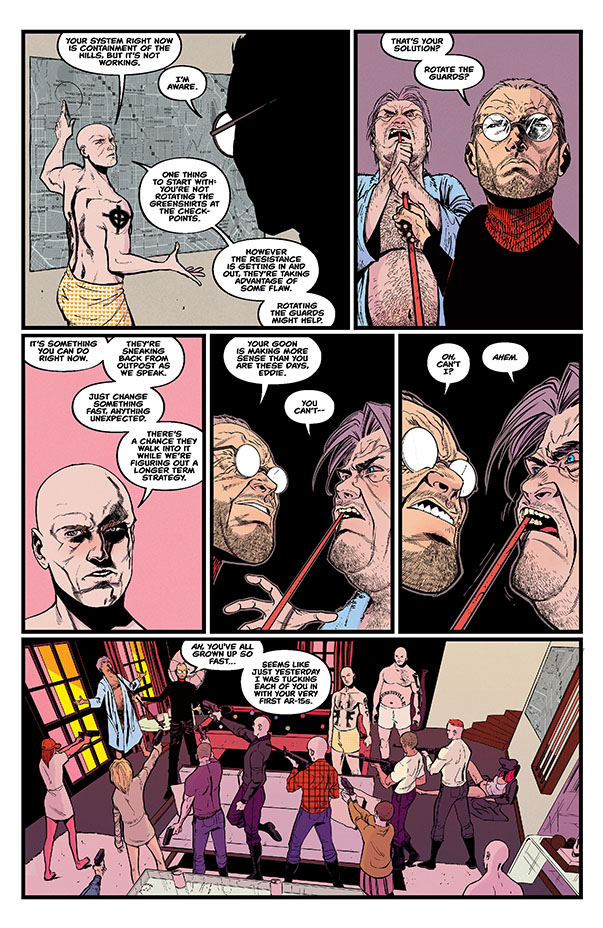 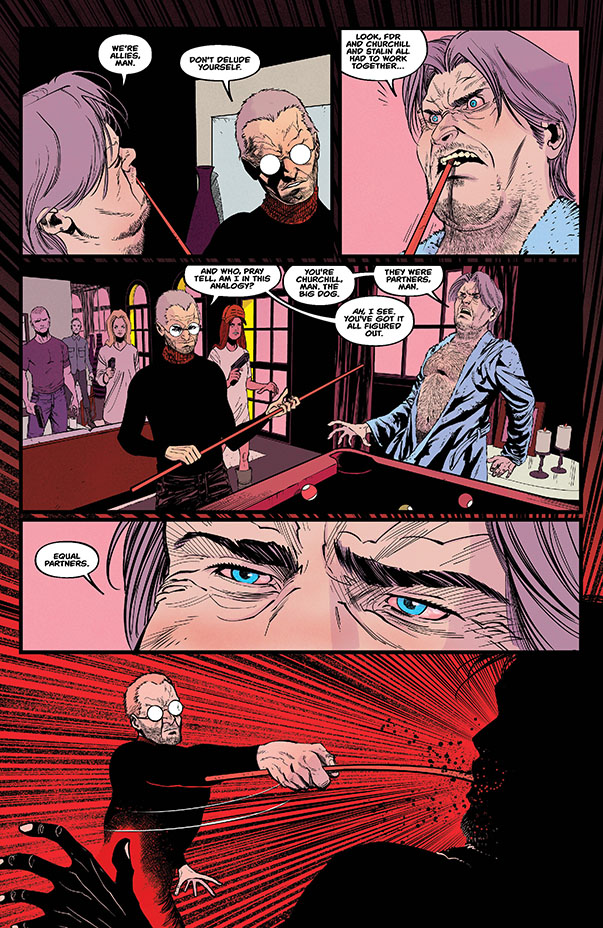