With picturesque vistas and rolling hills, rustic-chic settings and easy access from Los Angeles and Ventura counties, the vineyards and wine-tasting rooms tucked along the Santa Monica Mountains are a popular destination for weekend picnics, bridal showers and extravagant weddings. But in the wake of the Woolsey Fire, much of the Malibu coast has been decimated, from the vines to the venues and photogenic dreams of long-planned events to be held there.

“We are still in the process of gathering information from our membership about how they fared in the fire,” says Greg Barnett, president of the Malibu Coast Vintners and Grape Growers Alliance and owner of NaBu Wines in Westlake Village. “We’ve been in contact with at least half of them, and we’ve learned there’s been extensive damage to virtually all of the vineyards and wineries throughout the [American Viticultural Area]. We are thankful that there were no reports of injuries and that everyone’s family got to safety before the inferno reached their property.”

Designated as an official wine-growing region in 2014, the Malibu coast AVA covers about 45,000 acres, with around 200 acres of vineyards currently planted. The 40 members of the vintner association grow grapes for labels like Semler, Cielo and Malibu Wines, mostly small-production bottlings seen on the lists at places like Michael’s in Santa Monica, Spago in Beverly Hills, and Nobu Geoffrey’s in Malibu. Reported damage ranges from singed vines to total destruction of entire vineyards, plus residences and outbuildings on the properties along the Kanan Dume corridor, and in Triunfro and Corral canyons.

“Most everybody around me is gone,” says Richard Hirsh, owner of Cielo Vineyards. His property is near the corner of Mulholland Highway and Kanan Dume Road, clustered with Saddle Peak Wines and Malibu Rocky Oaks Vineyard. “Without a doubt, being surrounded by 10,000 vines saved my house and barn. We turned the drip irrigation system on and began soaking our olive grove as soon as we got word that the fire was headed our way.” 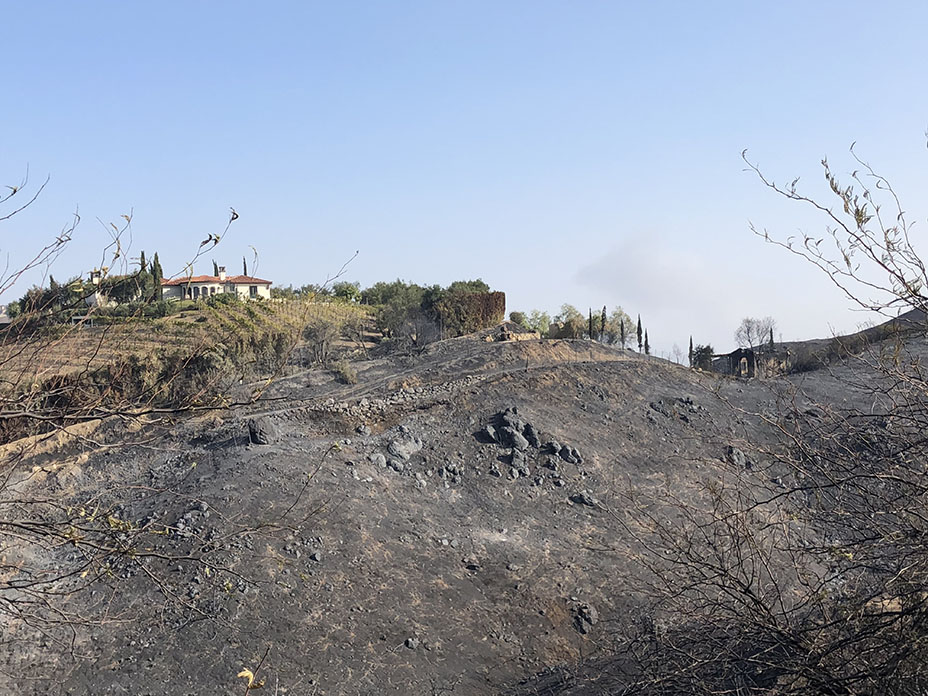 Hirsh says everything from the stakes and posts to the irrigations system has burned or melted away in his vineyards. Surveying the charred landscape, he says he’ll need to plant up to 4,000 vines to replace the damage. “From Cielo, you see everything within a couple of miles, and it’s almost all destroyed,” he adds. “My heart goes out to see Saddle Rock, across the street. They just lost everything but the animals. House, vineyards, everything. Even with the significant damage we sustained, we feel like we were spared and we’re going to replant and rebuild.”

Representatives for Saddlerock Ranch say about 95 percent of the structures are gone on the property. Family owned since 1978, the ranch, full of trees, stunning vistas and 100 acres of vines, has hosted thousands of weddings over the years, including those for Kelsey Grammar, Lisa Kudrow, Don Henley and more. It’s also home to an array of domestic and exotic animals, from horses to buffalo and zebras. The pastures are intact, reps confirm, but the main house, newly built Hilltop Estate and the log cabin were all lost.

Across Mulholland, the main building and tasting bars for Malibu Wines, where hordes descend every sunny weekend to sip Semler and Saddlerock wines, were scorched. Thankfully, no lives were lost, and the co-owners are working diligently on the next steps to manage the property and businesses. For those who had upcoming events planned, organizers have reached out to help on rescheduling or moving the events elsewhere.

Malibu Vineyard owner Jim Palmer says it is total devastation in Decker Canyon. “The entire place is all burned out, with 15 houses gone. Anything in the canyons is totally wiped out. I’m speechless. A friend who’s a fireman sent me a picture of what’s left of my house and vineyard and everything’s just ash, totally leveled.”

The owners of Montage Vineyards, Malibu Solstice Vineyards, South Slope Malibu Winery all tried to save their properties as firetrucks weren’t making it to their hillsides. South Slope’s Krystian Orlinski, a veteran Reuters reporter who was shooting video of the fires near his vineyard, says this was as difficult to cover as any war zone he’s been to. “Thank God for the wine cellar in the house,” notes Montage Vineyard’s John Gooden. “I’ve been drinking as much Malibu Coast wine as I can.” 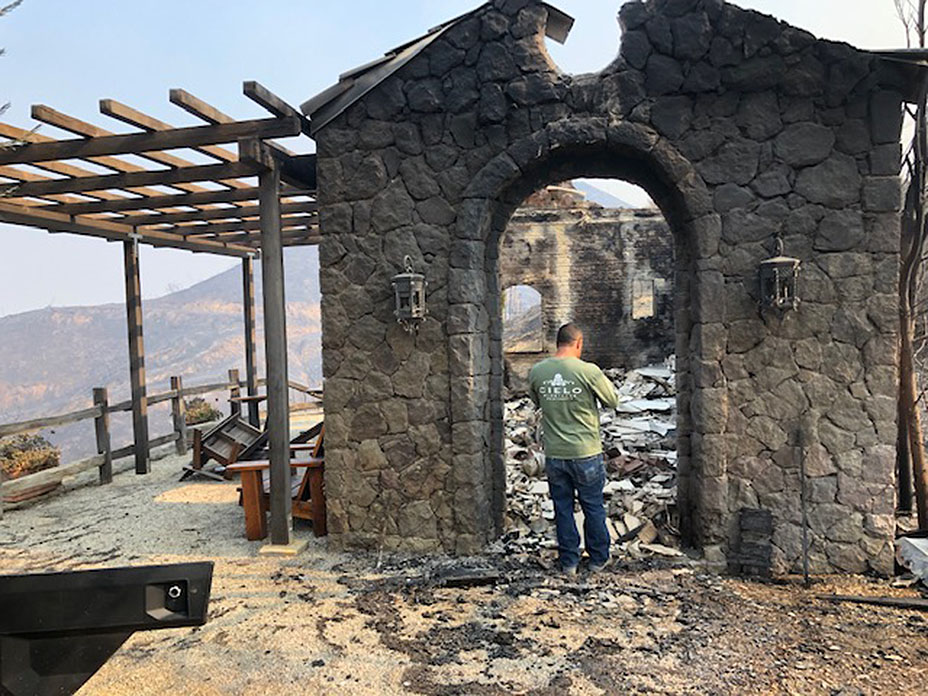 Over the last few years, events that go hand in hand with the wine business have grown exponentially in the region, filling the roads with tour buses, motorcycles, limos and ride shares. Katherine Miller, whose company Hidden Malibu Wine Country Tours takes two to three groups a week around to tasting rooms, says everything has come to a complete halt. She spoke to The Hollywood Reporter while trying to get back into her own Calabasas neighborhood — “We haven’t seen any fire here at all, so I don’t understand it,” she says from her car — and doesn’t know when things will get back to normal for her or the private estates she collaborates with.

With most utilities down and little cellphone service for days, social media has been the main vehicle for eventgoers and planners to learn of updates and closures for some of the venues. The exclusive Calamigos Guest Ranch, a luxury retreat with horseback riding, multiple pools and spa in the hills above Solstice Canyon, had worried brides and grooms desperately trying to find out if their weddings would take place this weekend.

The fire did take out some structures at the private Calamigos Beach Club, located in the former BeauRivage Restaurant along the Pacific Coast Highway, but the main building had little damage. Nearby, we’re yet to confirm the fate of the Rosenthal Estate Wines tasting room, but the Malibu Times reported that it was still standing but, like all of Malibu, closed for business.

Triunfro Creek Vineyards, a popular wedding destination, thanked first responders for saving many structures in Agoura Hills. “We are grateful that our farmhouse and the heart of the property has been spared thus far,” owners noted on Instagram. On the website, a notice is posted that all events are cancelled indefinitely.

Since social media helped build billionaire entrepreneur Howard Leight Jr.’s Malibu Rocky Oaks Vineyard high in the mountains, where brides can helicopter in for the big day, it’s only fitting that postfire news was found on Instagram. A friend of the owner posted that some of the vineyards were damaged, but the main house, an expansive Tuscan villa with breathtaking 360-degree views of the rolling hills at the end of a grapevine-lined road, remains intact. Trancas Vineyards owner Gary Peterson says that he lost his home along with a recording studio, as well as new rental units used by guests visiting the area. His daughter announced a GoFundMe page on Facebook to help rebuild.

Back at NaBu Wines, Barnett says this year’s Malibu grape harvest was already extremely difficult due to poor, uneven weather conditions and low yields. But the devastation from the fire is even more dispiriting. “We hope that our members are able to move on from this and rebuild,” he adds. “Some were more fortunate than others, but we’re doing what we can to help each other out.” 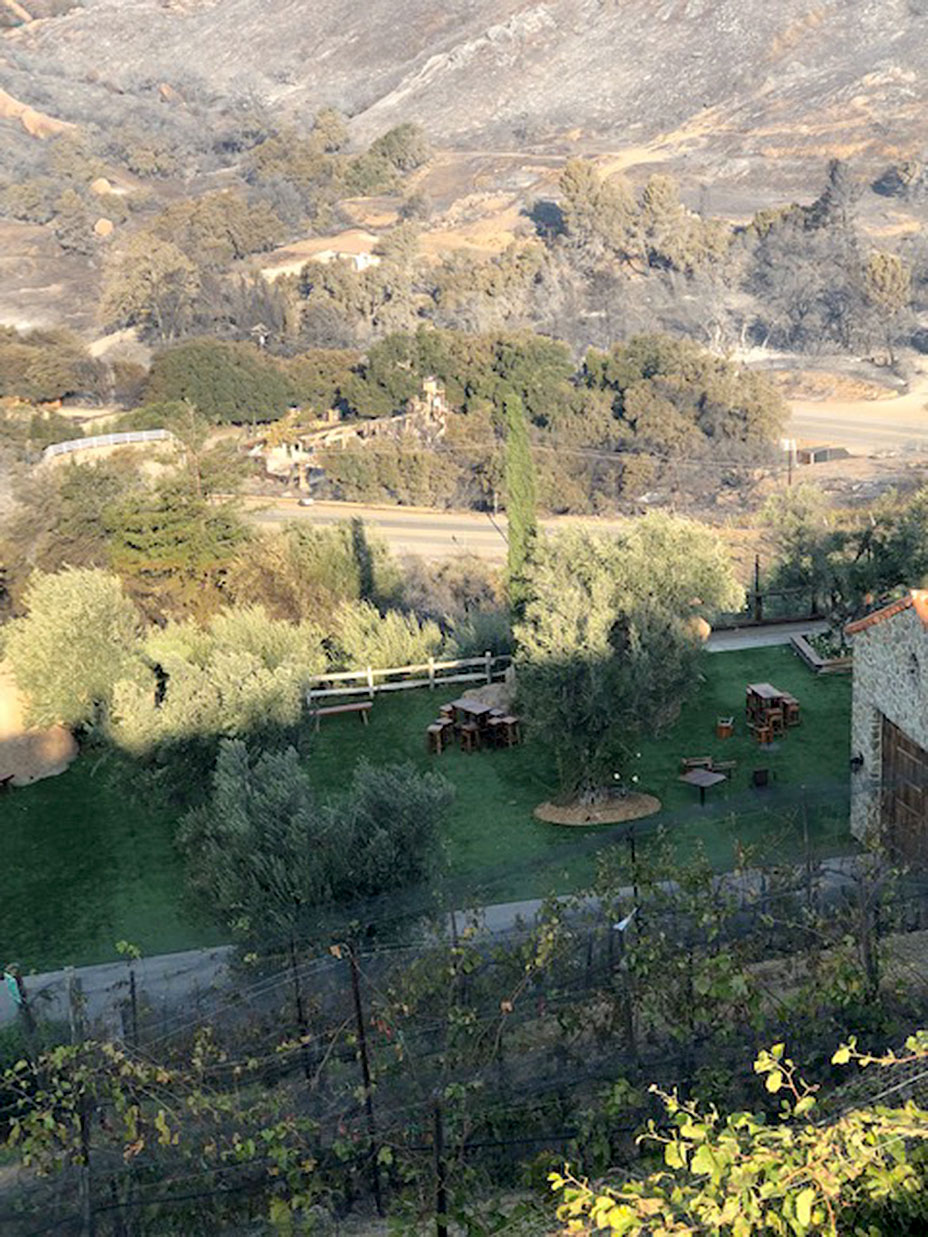