Jack London’s most famous novel gets a new feature adaptation from Disney’s 20th Century Studios as The Call of the Wild hits theaters Friday.

The latest version stars Harrison Ford as John Thornton, a recluse living in the Yukon during the Gold Rush of the late 19th century. His solitary ways are challenged when he comes across Buck, a Saint Bernard/Scotch collie who got lost and boarded a ship departing his home in California. Buck and John set out on an adventure in the wilderness, with the dog becoming the lead of a sled team

The movie, budgeted at $125 million to $150 million and with a generally positive 66 percent Rotten Tomatoes score, features a combination of live-action and computer animation, with Ford acting against a digital dog and within digital environments.

To sell the movie Disney has created a campaign that emphasizes both the heartfelt nature of the story and the life-or-death nature of the wilderness over a century ago, putting Ford at the center of its promos. 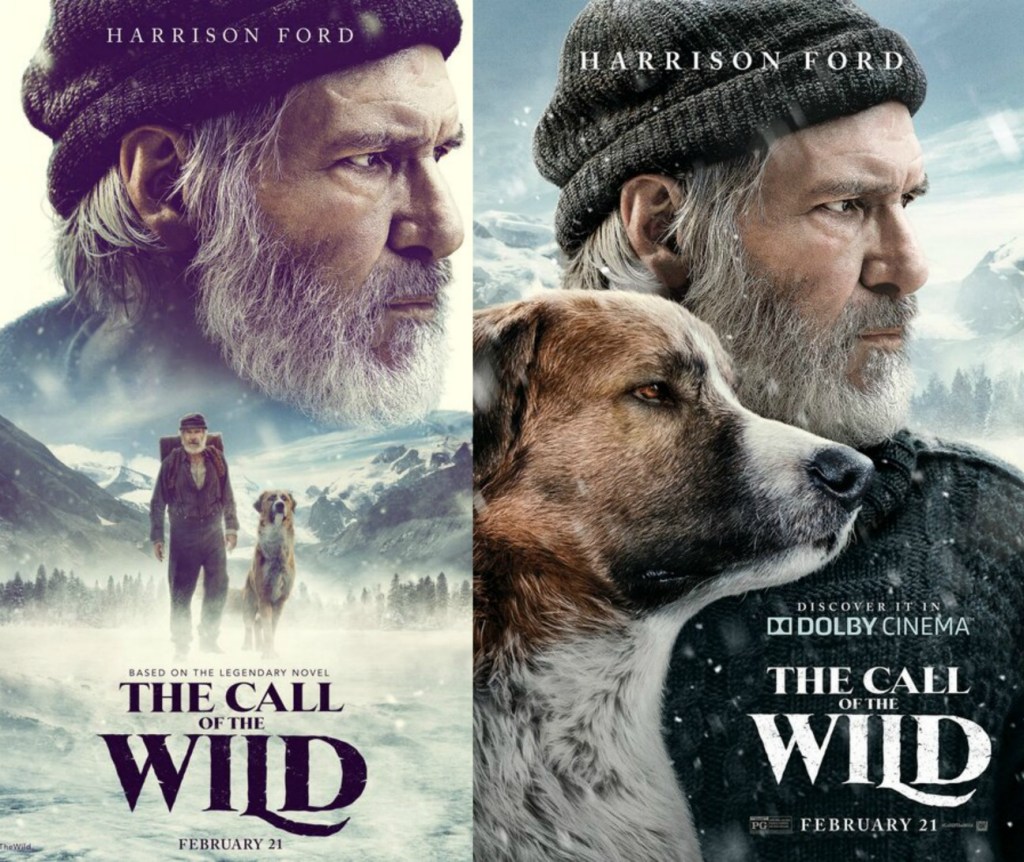 The first poster from November (by marketing agency Ignition) focuses on the key relationship of the story, that of John and Buck, who are shown hiking through the snowy landscape. A similar approach is taken on the Dolby Cinemas poster from later January, with Buck moved up alongside John to emphasize the partnership the two form over the course of their adventures.

John narrates the opening of November’s first trailer (3.9 million views on YouTube), talking about how he went to the Yukon wilderness to be alone and away from everyone. That changed when Buck came into his life and we’re shown some of the dog’s backstory. Buck’s arrival and personality lead John to embark on an epic adventure further than anyone has gone before, one that’s filled with danger, but we’re told the two of them will get through it together and with the help of those they meet along the way.

TV commercials kicked off in January with a “Destiny” spot filled with drama as John and Buck set off on the “adventure of a lifetime.” Additional spots hit the same basic theme while social videos pulled out different aspects of the story, mainly using footage seen previously in the trailers and clips.

A short featurette came out later in January with Ford talking about the story and how the dog changes John’s life.

The first clip has a dog sled team racing to seek shelter before an avalanche buries them. Another clip focused on the moment Jack and Buck meet for the first time. A third showed Buck taking on his role as the lead dog in the sled team.

One more clip released just before the movie hit theaters included one where John explains to Buck the trip he has in mind and why he’s drawn to the Yukon.

Ford appeared in a number of original videos released by Disney. In one he reads select passages from the source novel. In another he encourages audiences to “answer the call” and explore the majesty of nature, while in a third he offers a brief introduction to London’s inspiration for writing the story.

A promotional video created by Pet Collective TV used footage from the movie along with material to encourage people to give their dogs plenty of exercise and excitement, including letting them explore nature and more.

Additional videos had Ford reading a message people could record on their phones and use as a voicemail greeting for when they’re out exploring nature, or seeing the movie. Buck was also welcomed to the lineup of famous Disney dogs.

Assets like the story synopsis offered on the movie’s official website and as descriptions on the YouTube trailers focus on Buck taking on the role of lead dog on a sled team. That’s what’s also shown in a couple of the clips released in recent weeks.

But the majority of the campaign is more focused on the relationship between Buck and John, the former learning to survive in the wilderness and the latter taking this as an opportunity to come out of his seclusion and explore the frontier while it still exists.

While the movie has drawn some criticism for the “disorienting” nature of the animation, the draw here is watching a grizzled Harrison Ford in a heartwarming role and the promise of beautiful landscapes, albeit ones that are digitally rendered.

'The Call of the Wild': Film Review