Who killed the sex symbol?

It’s no mystery that in the era of #MeToo, the rules of combat have changed on the sexual battlefield. Women will no longer tolerate condescending or degrading treatment that was once business as usual in the workplace or dating arena. But in this long overdue push-back against sexual coercion and exploitation, has something valuable been lost?

The sex symbol was arguably Hollywood’s most brilliant artifact, propelling the young movie industry to world impact from the moment that Theda Bara flashed her coiled-snake brassiere in Cleopatra (1917). Sex was great box office. With its impudent populism, Hollywood crashed through stuffy proprieties lingering from the Victorian age and stationed itself at the bold forefront of the modern liberalization of sex. Movies were in sync with the radical new spirit of American women, who won the right to vote in 1920 and kicked up their heels throughout the flapper decade of the Roaring Twenties.

Protest about the “immoral” content of movies began even before World War One and would lead to Hollywood’s adoption in 1930 of the notorious Hays Code, which plagued progressive screenwriters and directors for decades. In the late 1960s, as studio power waned, a new sexual realism arrived from postwar European art films, whose chilly atmospherics can be felt in Jane Fonda’s brilliant performance as a crisply efficient prostitute in Klute (1971).

The great sex symbols of Hollywood were manufactured beings, engineered by trial and error, with the mass audience as their ultimate judge and jury. Decade by decade, the movie industry rediscovered primal archetypes that have animated myths around the world since the Stone Age. Major male sex symbols like Clark Gable, Cary Grant and Sidney Poitier have a mesmerizing natural authority onscreen, a supranormal power of personality and density of being that transcend their roles. Like their antecedents in ancient hero sagas, they inhabit and explore physical space, whose frustrations and dangers they endure but ultimately defeat.

The female sex symbol, however, commands emotional or psychological space. Her sensual beauty is an alluring mirage, hypnotizing and sometimes paralyzing. Never entirely present, she is attuned to another reality, an extrasensory dimension to which we have no access. There is an unsettling aura of the uncanny around the major female sex symbols, who channel shadowy powers above or below the social realm.

In George Hurrell’s classic publicity photo for Dinner at Eight (1933), for example, Jean Harlow sits enthroned in a luxurious all-white boudoir, the secret cell of a love goddess. This is not the ditzy proletarian gal that Harlow plays in the film but the real-life Hollywood superstar, serene in her majesty. She is draped in a clinging silk negligee (designed by Adrian) that provocatively exposes a shapely high-heeled foot. Her impossibly large cuffs of white ostrich feathers match her unreal platinum-blonde hair. From her outstretched hand dangles an oval mirror that is disturbingly blank, suggesting that she can never be known, even to herself.

In Stormy Weather (1943), Lena Horne in a stunning black dress with filmy net sleeves sings of unhappy love while leaning against a nightclub wall that magically turns into a rain-lashed window. As if flowing from Lena’s own imagination, the great African-American choreographer Katherine Dunham materializes outside on a Harlem street. She scornfully rebuffs a suitor and, inspired by a lightning strike, instantly creates her own mental universe — an abstract tropical landscape for her victory dance of queenly female power. Then the shifting tableau reverts to Lena, the elegant blues sorceress. 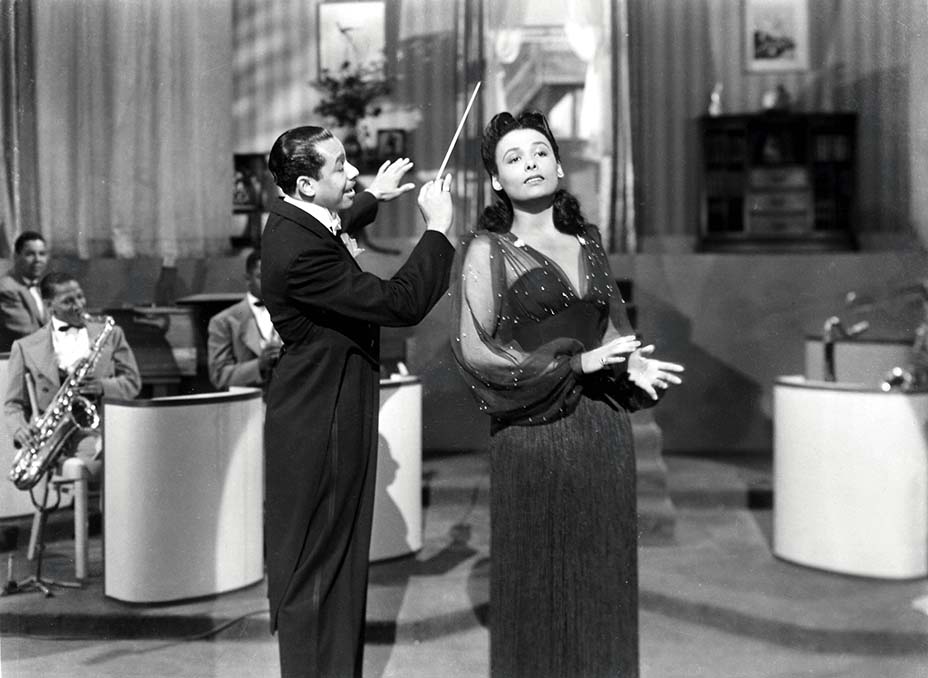 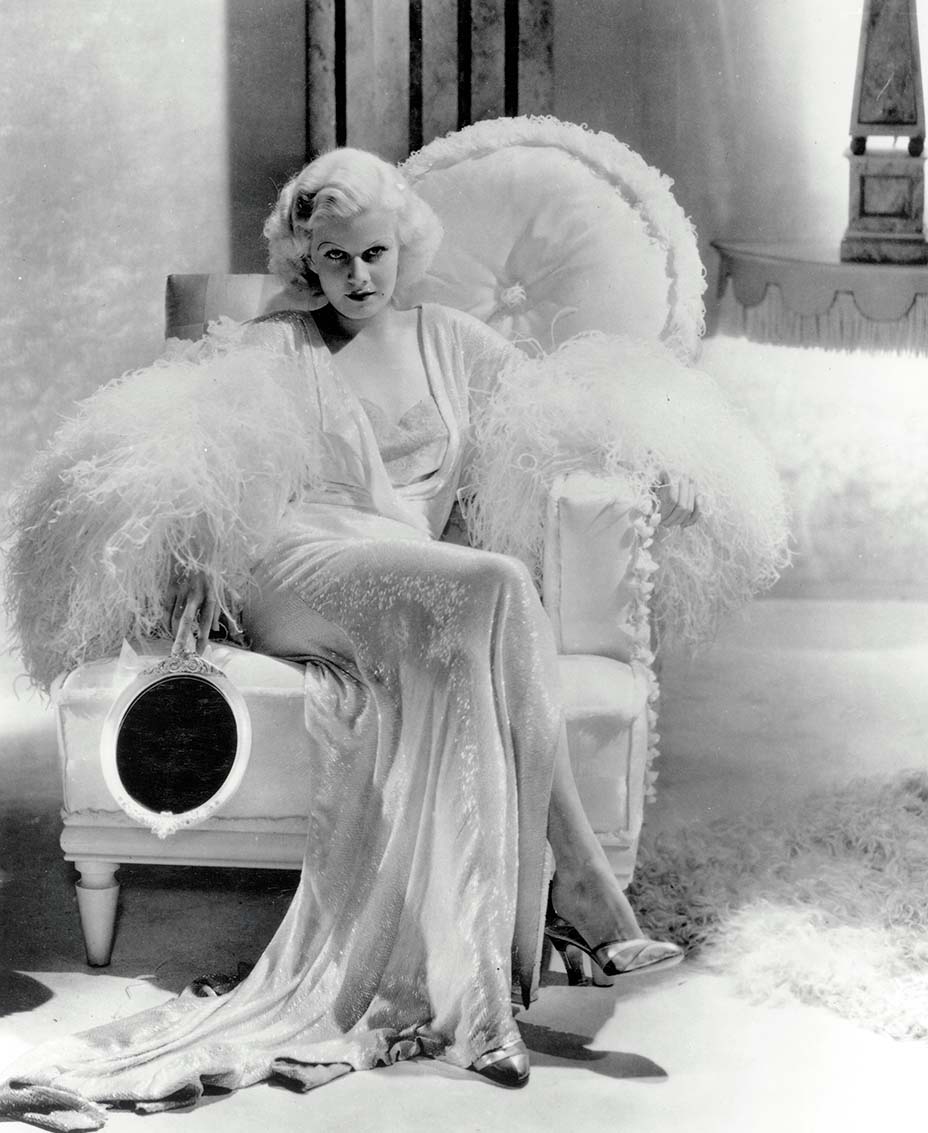 In A Postman Always Rings Twice (1946), Lana Turner as a roadside diner owner’s unfaithful wife blazes with a white-hot light that represents the blinding power of sex as a destructive primal force. In Gilda (1946), Rita Hayworth in Jean Louis’ sumptuous strapless black sheath sashays through an impromptu strip tease as she sings of a woman accused of causing the catastrophic Chicago fire (“Put the Blame on Mame”). A strange light emanates from her, beyond any technical manipulation — a charisma arbitrarily endowed and under no one’s control. A similar magnetic effect occurs in an upscale bar in Butterfield 8 (1960), where Elizabeth Taylor as a chic Manhattan call girl poses and flirts with an admiring gaggle of clone-like businessmen, while her married lover (Laurence Harvey) writhes in rage and humiliation.

None of this complexity and grandeur was acknowledged or even perceived by early second-wave feminism, which contemptuously rejected Hollywood’s sex symbols as vulgar libels objectifying women and making them passive to the imperialistic “male gaze.” Marilyn Monroe, with her troubled emotional history, was portrayed as a classic victim of exploitation by the patriarchal movie industry, which typecast her as a cartoonish “dumb blonde.” Feminists waged open warfare on the ultra-sexy “Bond girls” as well as the pioneering ABC TV series, Charlie’s Angels, which was dismissed as a frivolous “tits and ass” show.

But the sex symbols had already prophetically changed. In 1962, four years before Betty Friedan kick-started second-wave feminism by co-founding the National Organization for Women, Ursula Andress in a white bikini as fierce conch-diver Honey Ryder in the first James Bond film, Dr. No, stepped from the sea with a knife strapped to her hip, an electrifying apparition of the modern Venus as an armed Amazon. In 1966, Raquel Welch, in her role as a Stone Age survivalist in a ragged deer-skin bikini, spontaneously struck a militantly athletic pose for a poster for One Million Years B.C. that sped around the world and remains an iconic image of the liberated woman of the twentieth century. 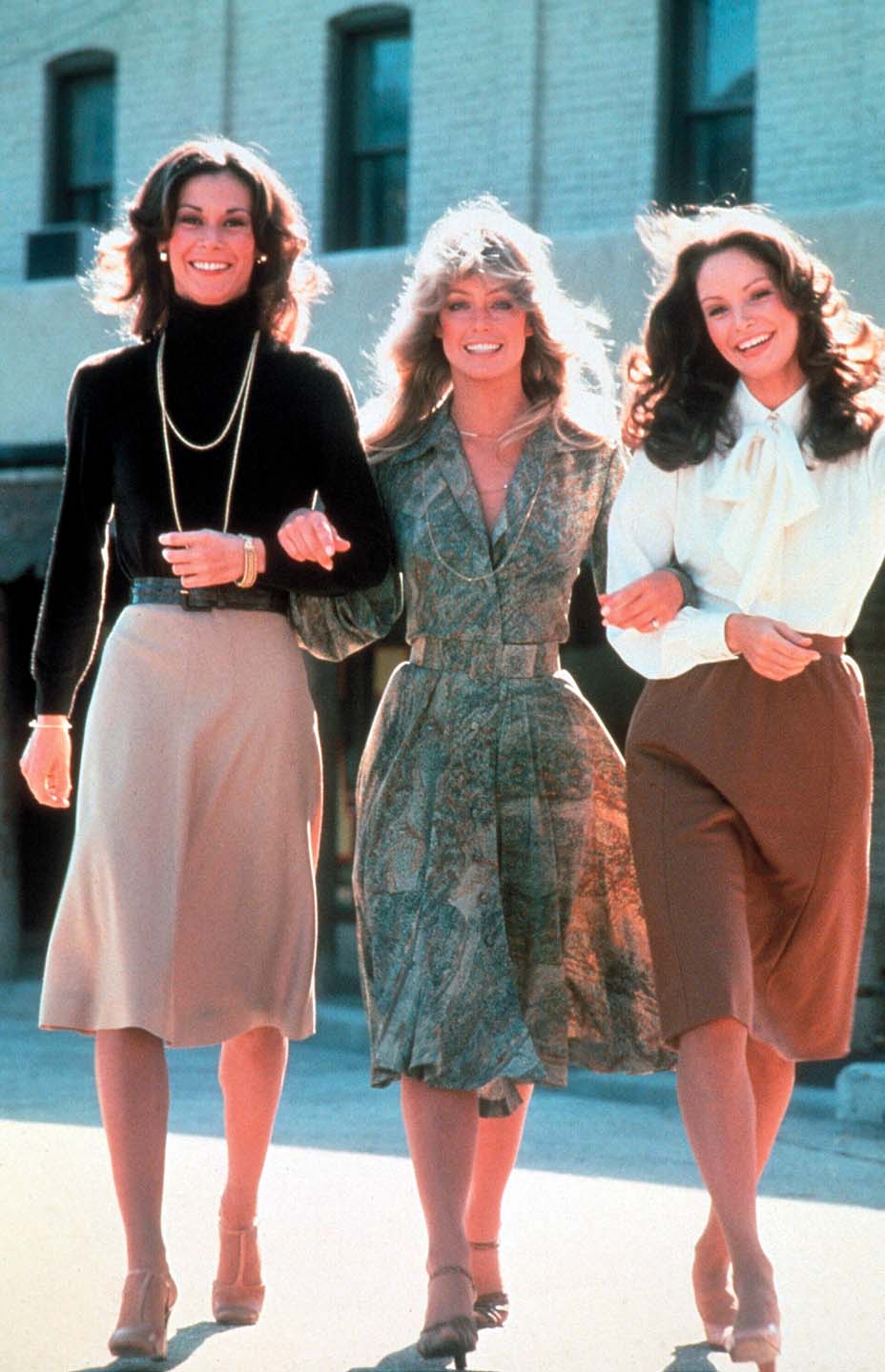 The last great sex symbol performance was given nearly three decades ago by Sharon Stone in Basic Instinct (1992), where the femme fatale is a scary-smart writer of eerie omniscience. Stone’s Catherine Tramell, first seen communing with crashing waves far below her stone patio, unmans a team of police inquisitors by merely uncrossing her legs. Stone recently told Allure magazine that Basic Instinct probably couldn’t be made today.

What confluence of social trends has led to the sex symbol’s current eclipse? At the heart of ancient myths about beautiful, mysterious women was a quest pattern: The hero endured a series of perilous challenges to win the lady or merely to survive an encounter with a magically deceptive temptress. At the deepest level, the woman represented special or occult knowledge, a secret treasure that could only be won by extraordinary men.

Jump-cut to today’s humdrum office world, where men and women sit side by side, doing the same routine jobs. Turf sharing and overfamiliarity between the sexes have produced boredom and simmering resentments. Meanwhile, casual, oafish hookup culture has spread from college campuses, turning formal courtship rituals into creaky antiques. Sex has lost its mystique.

Second, in the digital era, the sex symbol as radiant Hollywood icon has been displaced by a blizzard of Instagram selfies, where increasingly young girls strike provocative poses, appropriating star-making techniques pioneered by the movie industry. Bare flesh is suffering serious overexposure. Wholesale blurring of the line between private and public is ultimately antithetical to eroticism. When everything is seen and known, there is no titillating taboo to transgress. Paradoxically, despite its relentless skin display, virtual reality dematerializes the body and has made it a locus of chronic anxiety. Body dysmorphia, from which singer Billie Eilish suffered, has gone epidemic.

Third, the female sex symbol, descended from mother goddesses like Venus and Isis, once implicitly represented the life force, nature itself. Because of overpopulation as well as career demands, today’s values have shifted. Marriage and pregnancy are often delayed or avoided by ambitious middle-class working women. Furthermore, the body is becoming mechanized, wed to technology. From cosmetic plastic surgery to fertility treatments, science rather than mother nature is in charge. The next inevitable step is AI sex robots with “faux flesh.” The sex symbol as natural wonder is fading — and with her goes the internal compass of our primeval animal instincts.

Fourth, in this current climate consumed by politics, interest in psychology has waned. Sex and gender, following academic postmodernism, are now treated as socially constructed matters of choice. Many seem to believe that all the uncertainty, turbulence and risk of sex can be remedied by passing laws and imposing after-the-fact penalties. But great art, including classic Hollywood movies, has always shown the irrational forces boiling just beneath the surface of civilization. Poets since Sappho have seen love as obsession, delusion and madness. The present over-politicized formulas about sex, with their ritual combat of villains and victims, fail to recognize the inherent complications, instabilities and delirium in attraction and desire.

Significantly, in the long gap since Basic Instinct, drag has boomed in movies and on TV. Even in its most extreme parodic form, drag has preserved the archetypal power of the sex symbol that Hollywood abandoned. A transgender tradition, parallel to the onnagata (male actor who plays female roles) of Japanese kabuki, also has surfaced: The deep liquid emotion yet cool distance of the sex symbol can be seen in the Warhol superstar Candy Darling, the female impressionist Jim Bailey and the mercurial Indya Moore of FX’s Pose. Drag and trans performers, operating artistically outside gender conventions, might help counter the current wave of reductive literalism that sees nothing in sex but a rigid binary of oppressive political power, authored by male evil.

Signs of hope for a revival of Hollywood’s pagan glory days can be seen in the smash success this year of Hustlers, written, directed and produced by women. A female caper film set in a real-life strip club, Hustlers amusingly documents the ancient sexual theater by which women have aroused, managed and profited from male desire. With her tough athleticism, steely jaw and commanding gaze, Jennifer Lopez as a virtuoso pole dancer restores the Amazonian lineage of Raquel Welch and relights the fire of Hollywood sex.