It’s a rare sight: Nearly 20 female TV executives posing for a photo in sweatpants and T-shirts with no makeup, their hair messy. As the mix of agents, producers and network and studio bosses get situated, dozens of kids (ages 4 to 15) run amok in front of the camera, making silly faces to catch the photographer’s attention. This playful September Saturday in California’s El Capitan Canyon — 20 miles north of Santa Barbara and about a two-hour drive from L.A. — is part of an annual rite, now an eight-year tradition, for this group of Hollywood moms.

The women and their children have occupied the “lower loop” of the grounds, a sought-after section of cabins prized for its enclosed setup and proximity to the camp store — hence the group’s unofficial name, “the Lower Loop Ladies,” coined by Warner Bros. vp comedy development Wendy Steinhoff Baldikoski. Here, these high-powered leaders (most are the primary bread­winner in their family) will swap job stories, debate parenting issues and get marriage advice.

'Girls Trip' Writer: How My Pitches About Women of Color Are Becoming More Accepted (Guest Column)

The weekend gathering was the brainchild of WME partner Cori Wellins, a TV packaging agent who reps top writers including Liz Meriwether and Alan Yang. Starting out at William Morris in her 20s, Wellins got close with her fellow female assistants; they’d get together once a month for dinner, sharing support and advice. But as they rose in their careers, got married and became mothers, their monthly meetups fell by the wayside. “It’s because we’re all racing home to try to get a peek at our kids before they fall asleep,” says Wellins, who found “being a working woman one thing — and being a working mom a whole other thing.”

When her kids were 2 and 4 years old, Wellins had an idea: Get out of town. “What if we tried to organize a group and kill two birds with one stone?” she recalls. “We could see each other and also get in quality time with our kids.” Miramax president of television Lauren Whitney (then at WME with Wellins) jumped on board, insisting they gather others from the original assistant klatch. 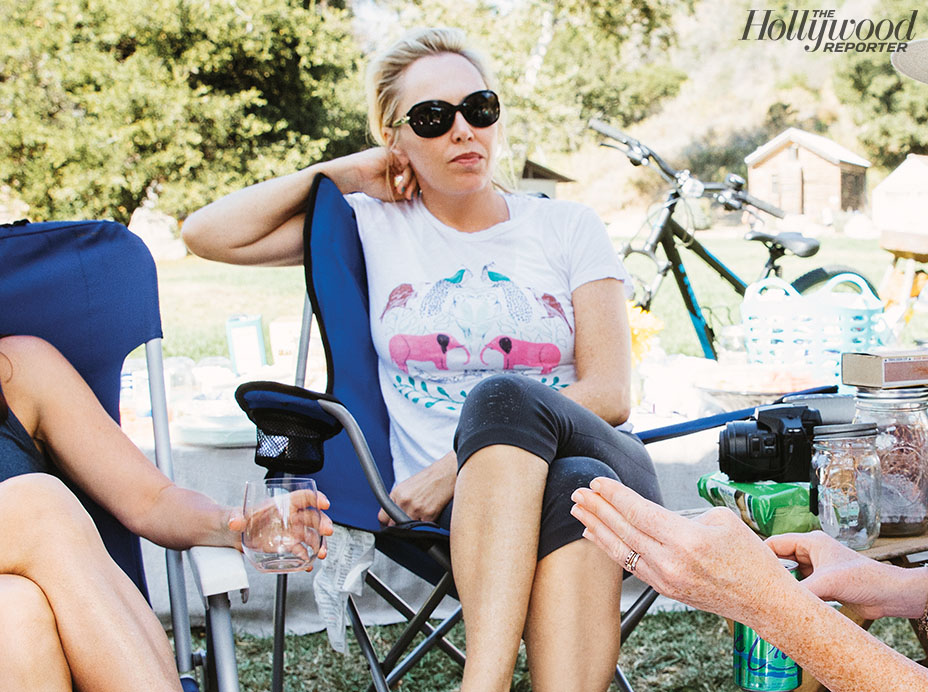 On that first trip to El Capitan in 2010, there were eight moms: Wellins, Whitney, Steinhoff Baldikoski, Showtime’s Robin Gurney, Warner Bros. TV’s Erin Wehrenberg, Universal TV’s Erin Underhill, Fox 21’s Jane Francis and Noreen Halpern, producer of Netflix’s Alias Grace — but “every year, more people would hear about it and call me,” says Wellins. “At some point, we reach capacity and have no cabins left.” And while there’s no vetting process for new additions, members are encouraged to float suggestions with the gang ahead of time.

The group spends days at the beach, swimming in the pool, biking and doing a “llama walk.” At night, they’ll grab pizza from the camp store or barbecue. This year, they brought glow sticks for a “glow party” and sang songs (including Hamilton, of course) around the campfire. But the central hangout zone — a tent, some blankets and lawn chairs — has become the hub where the women go deep into their lives and work. Not shop talk (though many of them collaborate on TV shows), but complex discussions about career goals and obstacles. When one exec was unhappy at her company for three years running, the others kept pushing her to find something else, finally issuing an ultimatum: Don’t come next year unless you’ve quit your job. (She did and is much happier now.) 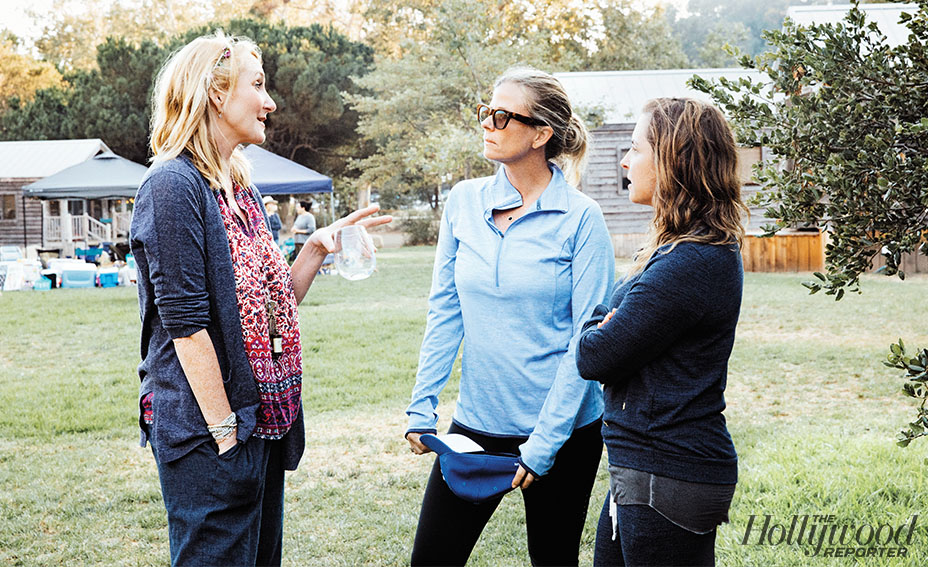 And though headlines about Harvey Weinstein’s sexual misconduct wouldn’t come out until October, the topic of harassment, unfortunately, has always been part of the conversation. “If people have gone through it, we’re there to talk about it and ultimately try to find the positive way through,” says eOne’s Carolyn Newman, formerly of Amazon. Adds Jill Arthur, a development exec at the streamer: “What’s going on with harassment now, it is nice to know you can count on women to help each other.”

Between trips, the group stays connected by email. “It’s, ‘Oh, hey, the recruiter called me with this,’ or ‘I need a speech therapist for my child,’ or ‘I’m doing this charity thing and you should come,’ ” says TriStar head of TV Suzanne Patmore Gibbs. They connect throughout the year, whether it’s a holiday meal or attending Lifetime scripted senior vp Joanna Klein’s cancer benefit or arranging a trip (with the kids) to the Broad — but El Capitan is the fulcrum. “I was always jealous of the guys,” says Anonymous Content manager Nicole Clemens. “Lorenzo di Bonaventura did this river rafting trip in the Grand Canyon, and I remember feeling really fucking pissed that I would never be invited. So it’s cool that this has become a thing.”

GANGING UP FOR SUPPORT, ADVICE AND “HOPE”
Hollywood women’s groups organize around everything from potluck to politics

PUTTING POLITICS ON THE TABLE Founded by Jamie Kantrowitz, Hannah Linkenhoker and Samantha Ettus in January 2017, the Los Angeles Women’s Collective — not Hollywood-specific but mostly made up of industry women — functions as a PAC. To be a member and attend the events (the six held in 2017 ranged from policy breakfasts to larger evening gatherings), women must agree to contribute money annually. The collective, which counts Hannah Minghella and Keri Putnam among its 40 founding members, then identifies female candidates to support, with a focus on the Senate and getting more women into political power. Says Minghella, “It’s been sort of the thing that has given me hope in the climate we’re living in.” lawomenscollective.com.

ASSISTANTS ON THE RISE The Group LA is a community of 50 women, mostly assistants to big-name showrunners and actors, who swap job advice over a morning meal at one member’s apartment every six weeks. When they’re not brunching, they volunteer together: They recently worked with Planned Parenthood and the L.A. Women’s Shelter (they also attended January’s Women’s March as a group). They recently launched a speaker series, which saw a political science professor talk about how more women can make it into leadership positions. Next up: They’re helping to organize a stand-up comedy fundraiser for the Geena Davis Institute for Gender in Media.

DINNERS FOR DOERS Organized by Maytal Gilboa, Amanda Krentzman, Lauren Rosenberg, Jessica Smith and Stacey Carr in 2009, Hollywood West has grown from a group of 20 WME assistants to nearly 250 executives in film, TV and new media. The group cultivates discussion about work-life balance, family-friendly company policies and women’s advancement. Its signature event, TableFor8, gathers members at restaurants around town (from Cheebo to Cheesecake Factory) — eight to a table, always mixing it up for new connections. It also hosts workshops, including ones on how to negotiate a raise and manage wealth. hollywood-west.com 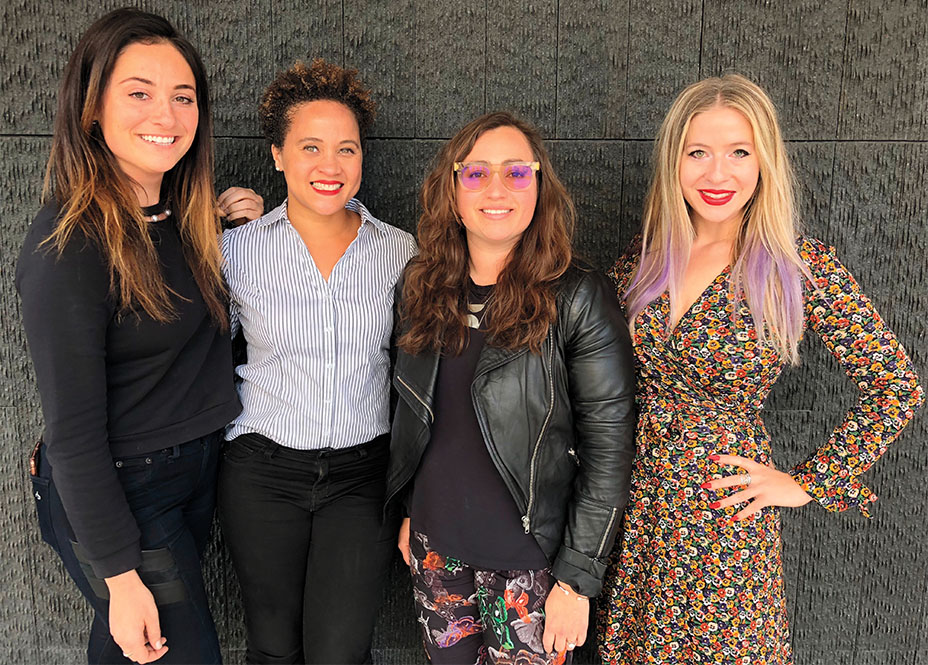