China’s formerly mighty Dalian Wanda Group, which had a grand plan to invest billions in the U.S. entertainment industry, is now getting an embarrassing bailout from its onetime tech billionaire rivals.

On Jan. 29, Wanda revealed that a consortium led by Pony Ma’s Tencent had agreed to enter into a strategic partnership and acquire $5.4 billion worth of shares in Wanda’s core commercial property unit. The deal was followed by the Feb. 5 announcement that Jack Ma’s Alibaba and a state-backed holding company had acquired a combined 12.7 percent stake in Wanda’s film unit for $1.24 billion.

Although some observers were quick to lump the two deals in with Wanda’s recent debt-reducing real estate sales, analysts closer to the market see other strategic maneuvering at play.

After Wanda came under fire from Beijing regulators in 2017 over its aggressive overseas dealmaking, many came to wonder whether the company, or even founder Wang Jianlin personally, had fallen afoul politically. Rumors about the tycoon’s official standing and concerns over the firm’s solvency soon spread to its U.S. entertainment assets, complicating Legendary Entertainment’s nearly yearlong search for a new CEO (attorney Josh Grode finally came aboard in December) and contributing to steep declines in AMC Entertainment’s stock price, which fell further than its exhibition industry peers during a particularly poor box-office year. Meanwhile, Wanda’s flagship luxury real estate project in Beverly Hills saw its local development partner walk away.

Sources in contact with senior Wanda leaders tell The Hollywood Reporter that Wang has no intention of selling AMC or Legendary. Despite having been forced to abort his vision for a major Hollywood expansion, the tycoon continues to view the film industry, both at home and overseas, as central to Wanda’s future.

While the Tencent and Alibaba pacts are unlikely to affect the U.S. assets directly, the votes of confidence from China’s two most celebrated tech titans probably will help assuage some of the wilder Hollywood predictions of Wanda’s imminent full-fledged meltdown. “It allows Wanda to say, ‘We still have association and opportunities with China’s top-tier brands, so things can’t be that terrible,’” says a Beijing-based executive who asked not to be named because of ongoing business with Wanda.

The Tencent-led agreement also resolves one of Wanda’s most pressing upcoming financial entanglements.

Expecting an eventual windfall when it relisted the unit in mainland China, where valuations tend to be higher, Wanda had promised to repay those original investors in full, plus interest of as much as 10?percent, if it failed to bring the unit public in Shenzhen by September?2018 — a target that became unlikely to impossible after Wanda’s myriad regulatory setbacks in 2017. By buying out those earlier investors, Tencent founder Pony Ma and company have thrown a lifeline to Wang’s cash-strapped conglomerate.

Wanda and its new partners also describe the investment as strategic, saying that they will work together on online-to-offline retailing services, connecting Tencent and JD.com’s internet prowess with Wanda, Sunac and Suning’s vast brick-and-mortar retail footprints, which span hundreds of shopping malls across China.

Regardless of how long this complicated endeavor may take, or whether it even ever comes to fruition (Baidu, Tencent and Wanda previously partnered on a $3 billion e-commerce joint venture in 2013, only to abandoned it several years later), Wanda insiders expect regulators to be warm to the plan. The swap of nameless private equity investors for corporate partners with powerful brand cachet and potential strategic upside should help Wanda gain approval for the mainland relisting — an essential step if Wang is to regain his swagger. The Tencent deal also may ease some of Wanda’s more immediate domestic debt burdens.

“The emergence of the consortium led by Tencent can boost confidence, thus helping Wanda to negotiate for potentially lower-cost refinancing,” says Dennis Lee, an analyst at S&P Global in Hong Kong.

When unveiling the Alibaba deal, Wanda again stressed the “strategic value” of the pair, adding it was “not merely for raising funds.”

“It does make sense for them to be partners, given the importance of online ticketing in China and the brick-and-mortar cinema network Wanda has,” says Stanley Rosen, a professor at USC who specializes in the Chinese entertainment industry.

Wanda Film controls China’s largest cinema chain, while Alibaba owns Tao Piao Piao, one of the country’s most popular mobile ticketing services, on which it has spent hundreds of millions securing market share. Adds Rosen, “It’s a good synergy, and presumably encouraged by the authorities, because the tech giants are the future as far as China is concerned.”

Additional unstated political calculations may also have played a part in the deal, insiders tell THR. The relatively low price Alibaba and its state-backed co-investor, Beijing Cultural Investment Holdings, paid for their stakes does seem to suggest that there is more to the story.

Currently, Wanda Film is Wanda Group’s only publicly listed entity in mainland China, but shares of the unit have been suspended from trading on the Shenzhen stock exchange since last July pending an asset restructuring (Wanda is working to secure permission to inject all of its Chinese movie production, marketing and distribution businesses into Wanda Film, which previously only contained the cinema line business).

Under the new deal, Alibaba acquired a 7.66 percent stake in Wanda Film, while Beijing Culture took a 5.11 percent stake. The companies agreed to pay 51.96 yuan a share, slightly less than Wanda Film’s last closing price of 52.04 yuan, which sits on the low end of the range in which the shares historically have traded (the July freeze came near the peak of Wanda’s very public regulatory woes). A source with knowledge of the situation tells THR that Wanda actually was most interested in getting the government-backed Culture Investment onboard — and that having Alibaba in the lead position helped bring the latter party along.

Controlled by the Beijing municipal government, Culture Investment describes itself as a funding platform for the capital city’s culture and creative industry. The company’s investment portfolio includes everything from a cinema chain owned by Jackie Chan to Comcast’s $3 billion Universal Studios Beijing theme park. “After everything that happened last year, [Wanda Film’s] priority was getting the government in as a stakeholder — for political insulation,” says the source.

Although Wanda may be beginning to regroup on the domestic front, overseas the conglomerate continues to face pressure.

Cut off from the parent company, Wanda Commercial Property’s offshore interests, which included an array of capital-intensive luxury real estate projects, soon were staring down a liquidity crisis. The company has $510 million in offshore syndicated loans due in March, followed by $1 billion in May and $600 million in senior notes due in November.

Those sums would be relatively small for the parent company in Beijing, but without access to capital in China, Wang’s only option overseas was an abrupt reversal of the group’s global expansion via painful disposals.

On Jan. 17, Wanda agreed to sell its interests in a London development for $81 million (59 million pounds) in cash and $220.7 million (159.5 million pounds) in transferred debt. The conglomerate next offloaded two high-profile Australian projects for $913 million ($1.13 billion Australian dollars) in equity and assumed debt on Jan. 29. The very next day word leaked that Wanda was accepting offers for its two real-estate holdings in the U.S.: the much-hyped $1.2 billion luxury complex in Beverly Hills, and a 60 percent stake in a $900 million Chicago skyscraper project.

“The sale of the two projects in Australia and one in London will enhance DWCP’s offshore liquidity,” said S&P Global’s Lee in a recent ratings bulletin. Lee added, however: “Further offshore liquidity pressure looms due to the offshore maturities in May and November.”

Evidence of continued pressure came this week with Wanda’s sale of a 17 percent stake in Spanish soccer club Atletico Madrid on Wednesday.

Although Wanda is currently fielding offers for the Beverly Hills project, sources say the conglomerate would prefer to hold onto it if they can find another means of redressing the offshore capital crunch. The company is in talks with regulators about at least two other options that would allow it to avoid further sales.

“It’s a very desirable piece of real estate and a lot of time and effort has already gone into it,” says a source.

Dubbed One Beverly Hills, the project sits along Santa Monica Boulevard in the lot adjacent to the Beverly Hilton Hotel. Wanda bought the property in early 2014, and later overcame the exit of its local development partner, as well as bitter objections and lawsuits filed by Israeli-American entrepreneur Beny Alagem, owner of the Beverly Hilton next door.

Sources say Alagem recently reached out to Wanda with an offer for the property, but the Chinese company declined to take him up on it, only partly because of the past antagonism.

Late last year, Wanda was granted permission to issue an offshore bond issue in Hong Kong — a development that was interpreted as suggesting that Beijing might be loosening its leash on the company after Wang’s various public prostrations, including his promise that Wanda would “keep its main investment within China” going forward. The permission expired before Wanda acted upon it though, and the company is now reapplying for approval from China’s National Development and Reform Commission to issue a new bond.

Wanda also is said to be holding talks with China’s State Administration of Foreign Exchange (SAFE) about the possibility of receiving a dispensation to remit capital overseas from Beijing to clear the debts. 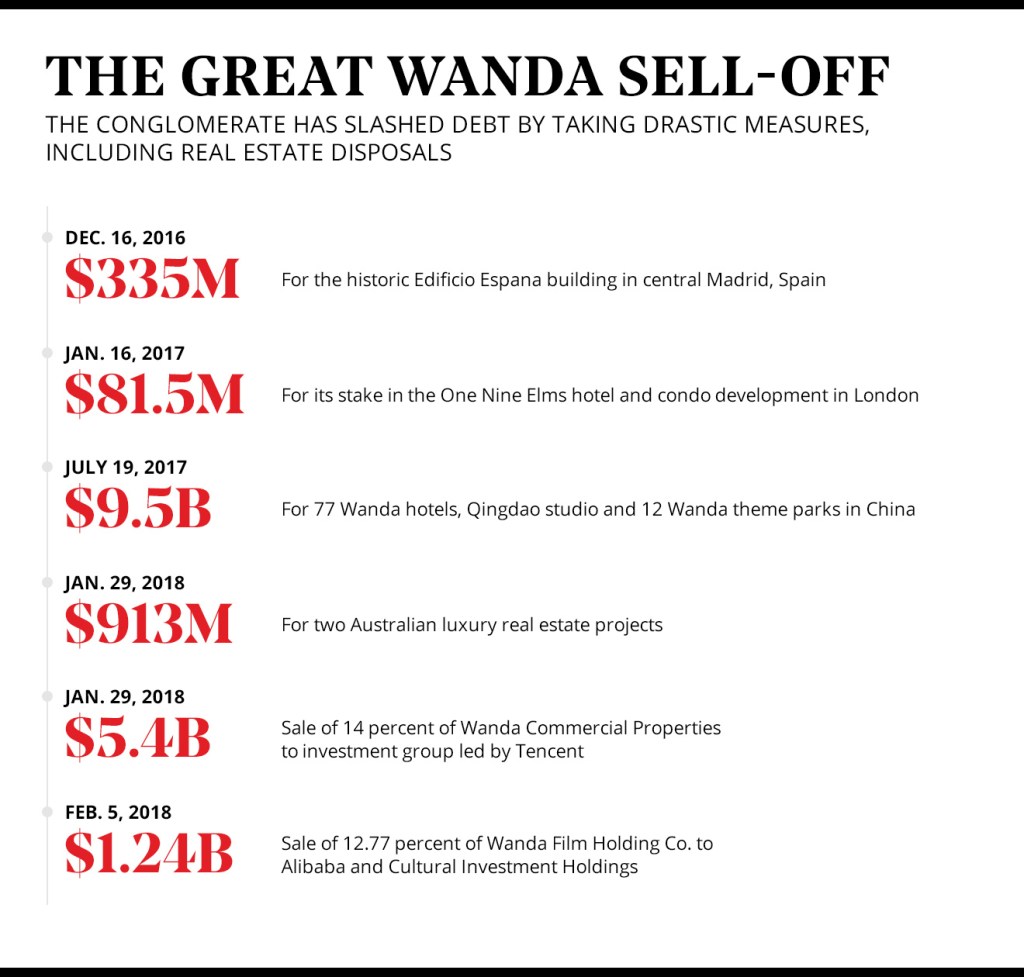