Since Disney announced on Aug. 8 that it would ditch Netflix and launch its own over-the-top video channel for family fare, more than $3 billion in market capitalization has vanished at the world’s largest subscription streaming service to date. Such is the clout of the dominant film and TV studio and its plan to build a digital home for anticipated blockbusters such as Toy Story 4 and Frozen 2. But it may be separate plans to launch a new ESPN stand-alone streaming service that could have quicker and more meaningful implications for the future of television.

ESPN has been losing subscribers since about 2013, though it has been making up for those declines with ever-increasing fees, now at about $7.54 per sub — more than consumers pay for TNT, NFL Network, Fox News, USA Network, TBS and Nickelodeon combined. But ESPN’s defections recently reached roughly 3 percent of subscribers annually, according to Nielsen, so the conglomerate clearly feels it needs to do something drastic, given that, by some Wall Street estimates, the sports network is responsible for roughly one-quarter of Disney’s profit each year.

While much is in flux, Disney CEO Bob Iger said the new ESPN service will stream 10,000 hours of live sports annually that customers won’t get from the ESPN cable channel, including MLB, NHL and Major League Soccer matches as well as Grand Slam tennis tournaments and a plethora of college sports. Additionally, Iger said the ESPN digital service will offer individual sports packages for purchase.

Iger wants the new content to be accessed through ESPN’s existing app. Consumers who pay for ESPN through their cable or satellite bill will still get it via authentication, but ESPN also will offer freestanding subscriptions to those who don’t get ESPN that way (though the premium content will be reserved for TV subscribers).

It sounds simple enough, but investors are wondering first, if Disney will cannibalize its existing ESPN customers and second, whether this move by cable’s most popular channel will hasten the demise of the cable TV bundle, thus damaging all of Hollywood.

“The new ESPN service looks initially positioned as an add-on product for existing pay TV subs,” wrote Bernstein analyst Todd Juenger. “But it’s a very slippery slope from there to a true, full-blown network substitute. Disney could pull that switch any time. What do you do now if you’re Discovery, Viacom, AMC Networks, Fox or anybody?” 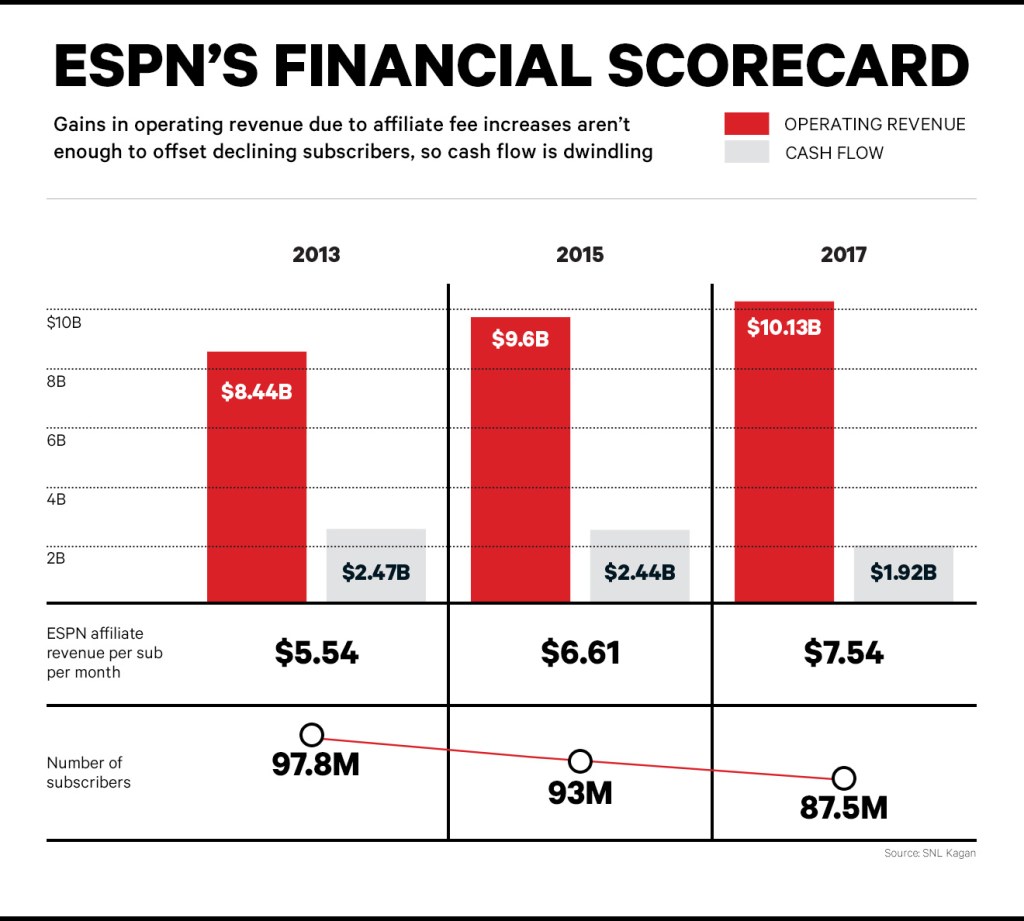 Perhaps Disney ought to combine its two upcoming streaming services into one, say some observers, then let those other purveyors of cable networks beg Disney to be a part of that skinny OTT bundle. “There are many investors who believe that Disney, more than any other company, is responsible for holding what’s left of the bundle together,” writes Juenger. “Disney might be trying to set up a dynamic of, ‘Give us good terms next time around, or we’re going around you.’ Of course, that could also backfire: ‘Since you’re obviously on your way to going around us, we’re dropping you, good luck.’ We could see this playing out either way.”

Juenger envisions the big pay TV providers like Comcast and DirecTV playing ball with Disney, but the smaller ones may take this as a final-straw chance to exit the business entirely. “Just sell connectivity and let their subs pick their own video products over-the-top,” he suggests.

Disney appears to be between a rock and a hard place with ESPN: The network remains a cash cow, but its growth has been reversed.

Nielsen says that young millennials (ages 18-24) were watching 32 percent less television in 2015 than they were in 2010, and that trend isn’t likely to reverse. Meanwhile, video delivered over the internet was an $11.9 billion business in the U.S. last year and will surge to $18.9 billion in 2021, according to PricewaterhouseCoopers. To reach younger and expanding crowds, Disney — like all others — will need its content to be online and easily accessible on mobile devices.

Disney’s revenue from cable networks (the majority of which comes from ESPN) in fiscal 2017 is expected to be about $16.6 billion, about 30 percent of the conglomerate’s total revenue, while profit is projected at $5.4 billion, or 35 percent, according to Barton Crockett of FBR. Crockett figures that the cable segment’s profit will decline for the next three years. Disney may agree, hence it has been cutting costs by laying off workers while it readies its standalone streaming product to make up for lost viewers and stagnating ad sales. Cash flow at ESPN will drop from $2.47 billion in 2013 to $1.92 billion in 2017, according to SNL Kagan.

Iger, naturally, doesn’t view the situation as quite so dire, telling CNBC on Aug. 8 that 94 of the top 100 shows in 2016 in the U.S. were sporting events. Iger also gave a shout-out of (tepid) support for the cable bundle in general. “We’ve seen general erosion in the multichannel ecosystem that’s probably due to a number of factors: people not signing up until later in life, some cord-cutting, some migration to skinnier bundles,” he said. “It’s a combination of things. It’s still, by the way, extremely profitable.”

Any way you slice it, Disney is entering uncharted waters, says Mike Bloxham, a senior vp at consultancy firm Magid Associates, since the OTT and SVOD sports offerings thus far are primarily focused on individual sports. “The general sports space is wide open for a major player, and there’s no bigger brand than ESPN,” he says. “If anyone is going to succeed in becoming the Netflix of the sports category, it is ESPN.” 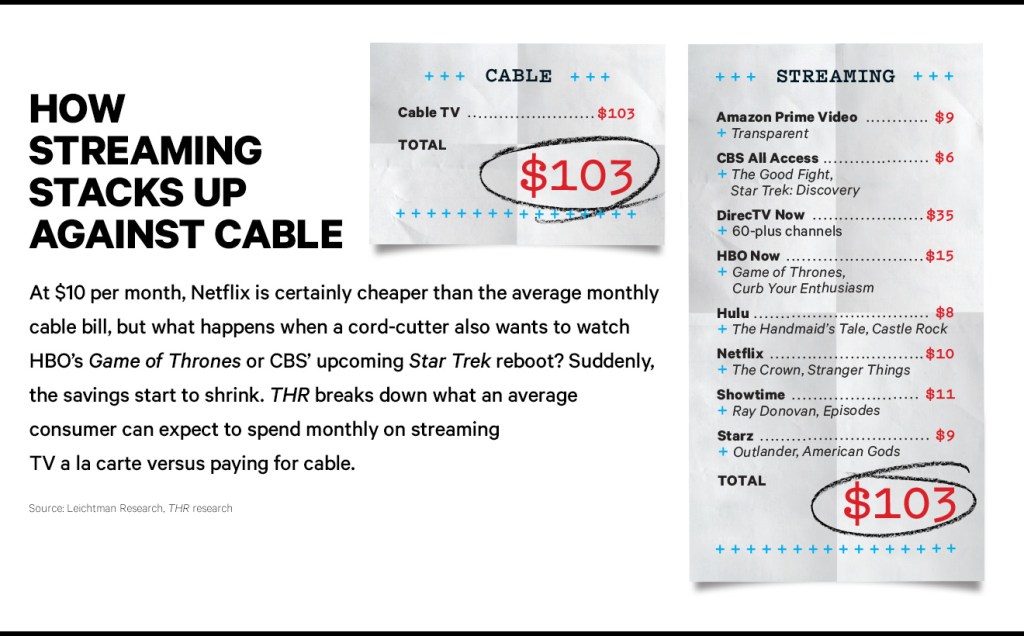 How Disney's Plan to Pull Movies Could Impact Netflix