The XXIII Winter Olympics — which officially kick off Feb. 9 with the Opening Ceremony in Pyeongchang, South Korea — have for months been defined by fears that there would be an international incident involving North Korea. And much of the talk among NBC Sports and NBC News staffers — the company typically sends more than 2,000 employees to the Winter Games — has been about how no one wants to go.

“It’s terrifying,” says one veteran NBC News staffer. But in January, tensions appeared to ease when North Korea officially accepted the South’s invitation to send athletes to the Games. It will be the first time North Korea has participated in the Winter Olympics in eight years. “Imagine the amazing global moment of having the North and the South together for the first time in that Olympic stadium,” says Jenny Storms, NBC Sports Group’s CMO. “That is the beauty of the Olympics; it brings people together, it brings the world together.”

While that may be true, the larger issue facing NBC is: Who will be watching and on what platform? All told, NBC Universal shelled out more than $12 billion for the rights to the Games through 2032 in deals that, starting with the 2022 Games, encompass whatever device or platform will emerge. But as the network gears up to broadcast for roughly two weeks from Pyeongchang, it is facing a series of challenges. From declining viewership to fragmented audience share in the streaming age to the retirement of longtime host Bob Costas, observers wonder if these hurdles, coupled with a distinct lack of early buzz, will lead to a return on NBC’s massive bet. 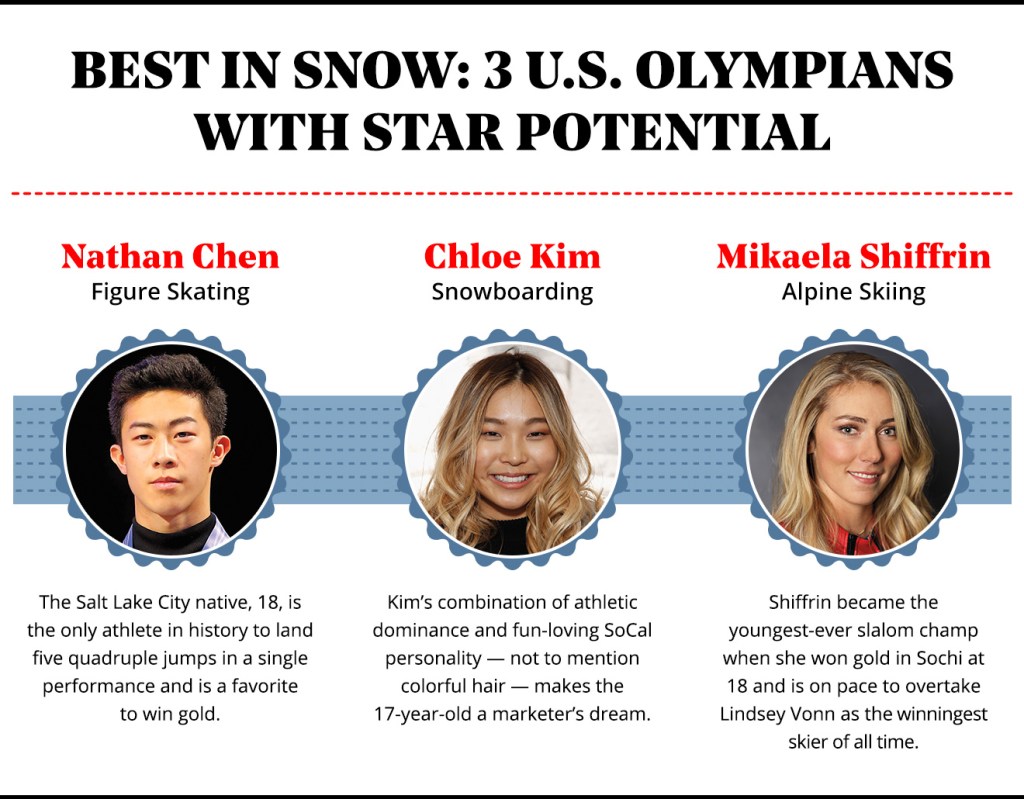 While NBC’s long-term investment in the Games underscores the enduring value of live-event programming in a world of cord cutting and on-demand content, the media narrative on day one of Pyeongchang will still be about the linear ratings. And if the network’s success is to be based on that metric, recent trends suggest it will struggle: In 2014, NBC’s primetime coverage of the Sochi Games averaged more than 21 million viewers each night, down 17 percent from the previous (heavily live) Games in Vancouver four years earlier.

This probably explains why Jim Bell, president of NBC Olympics, says it’s time to move beyond traditional viewership ratings.”The Olympics are the tip of the spear as technology and media and sports are all evolving,” says Bell. “Our expectations are broader than focusing on a single linear number on a single night of the Olympics.”

NBC Olympics.com and the NBC Sports app will deliver more than 1,800 hours of live-event and simul-stream coverage, meaning all of NBC’s content will be live-streamed. For the first time, the network is packaging its Olympics advertising with its proprietary Total Audience Delivery tool, which measures simultaneous viewing across platforms. Ad sales for the Games are pacing well ahead of Sochi (which took in $800 million), and Dan Lovinger, executive vp ad sales for NBC Sports, says Pyeongchang will exceed $900 million.

Kareem Abdul-Jabbar: The Olympics Are More Relevant in This Time of Tyrants

Olympic Games in Asia have typically been challenging, owing to the inhospitable time zone; Pyeongchang is 14 hours ahead of the U.S. Eastern time zone. But one thing NBC has going for it is that since many winter sports require natural light, they will be held in the morning in South Korea, putting them live in primetime in the U.S. In fact, NBC’s primetime coverage will be live across all U.S. time zones, a first for a Winter Games (coverage on the West Coast will begin at 5 p.m.). In all, NBC will present more than 2,400 hours of coverage across NBC (176 hours), NBCSN (396), CNBC (46), USA (40.5) and NBCOlympics.com. That is the most ever for a Winter Games, which are considerably smaller in scale than the Summer Games, yet still cost roughly $150 million to $200 million to produce.

“What we really realized in Rio was that consumption patterns were changing,” says Lovinger. Indeed, in Rio, 30 percent of all digital minutes consumed were on connected TVs. The last time there was a Winter Olympics (in 2014), there were no connected TVs.

Another challenge facing NBC is a paucity of marquee U.S. talent entering the Olympics. The U.S. appears to have no gold medal contenders in women’s figure skating, traditionally the most watched event, or in pairs. “I think NBC is going to be faced with having to promote and introduce a number of athletes,” says Neal Pilson, the former president of CBS Sports who runs a New York-based sports consultancy. Among the athletes the network is featuring in heavy promotional rotation are sister-brother ice dancing duo Alex and Maia Shibutani.

There also will be a passing of the baton among NBC personnel. Mike Tirico, who joined the network in 2016, will take over for longtime primetime host Costas, and the Today show will be there sans Matt Lauer (so there will be no luge with Al Roker). Hoda Kotb, Lauer’s replacement, will co-anchor with Savannah Guthrie from South Korea beginning Feb. 12.

Pilson adds, however, that NBC may be able to capitalize on the fact that star power isn’t necessarily the Olympics’ biggest selling point. “The most important issue for Olympic viewers is the flag,” he says. “That’s what drives the Olympic Games — it’s pride of country. They are carrying the American flag. It’s the appeal to patriotism.”