Driving through Los Angeles recently, it was hard to miss them. “Pluto TV,” read the billboards. “It’s free TV.” You could be forgiven for asking, what, exactly, does that mean? But if Bob Bakish has his way, you won’t be wondering much longer.

The Viacom CEO paid $340 million for the streaming video upstart in January and has made it central to his plan to revive Viacom’s floundering network of brands. As cable subscribers bail and are unlikely to return, Bakish — like his peers at Disney, WarnerMedia and NBCUniversal — has realized that he must chart a digital future for iconic, if now slightly moth-eaten properties like MTV, BET and Nickelodeon.

With Pluto TV, an ad-supported platform that has attracted 16 million monthly users by mimicking the experience of channel surfing for cord-cutters, Viacom hopes to extract new dollars from old episodes of The Hills and All That. It’s just one element of a prolonged turnaround strategy that includes a growing ad-targeting platform, plans for more digital video production and new infrastructure to exploit its library for third-party buyers.

Asked about other possible acquisitions, Bakish signals that he’s placing his streaming bet on Pluto TV. “It’s all about adding scale to key parts of the business such that we can accelerate our growth,” he says. “We’re very disciplined in that regard.”

Bakish is already late to the streaming game. Sure, acquiring Pluto TV gives him a few months’ head start on new entrants from Disney, WarnerMedia and Apple, but Netflix dominates the over-the-top landscape with its nearly 149 million global subscribers and ballooning original programming budget. Though Viacom plans to set itself apart with a focus on the significantly less crowded ad-supported streaming space, it’ll still have to fight to capture even a sliver of viewers’ time at a moment when there’s a near-constant font of new shows and games and apps and podcasts competing for their attention.

And while Viacom’s fortunes have improved under Bakish — operating income is up at film studio Paramount, for example, following the box office success of A Quiet Place and the latest installment of Mission: Impossible — the company is still $9 billion in debt and remains significantly smaller and less cash rich than nearly all of the tech behemoths and entertainment conglomerates it’s up against. 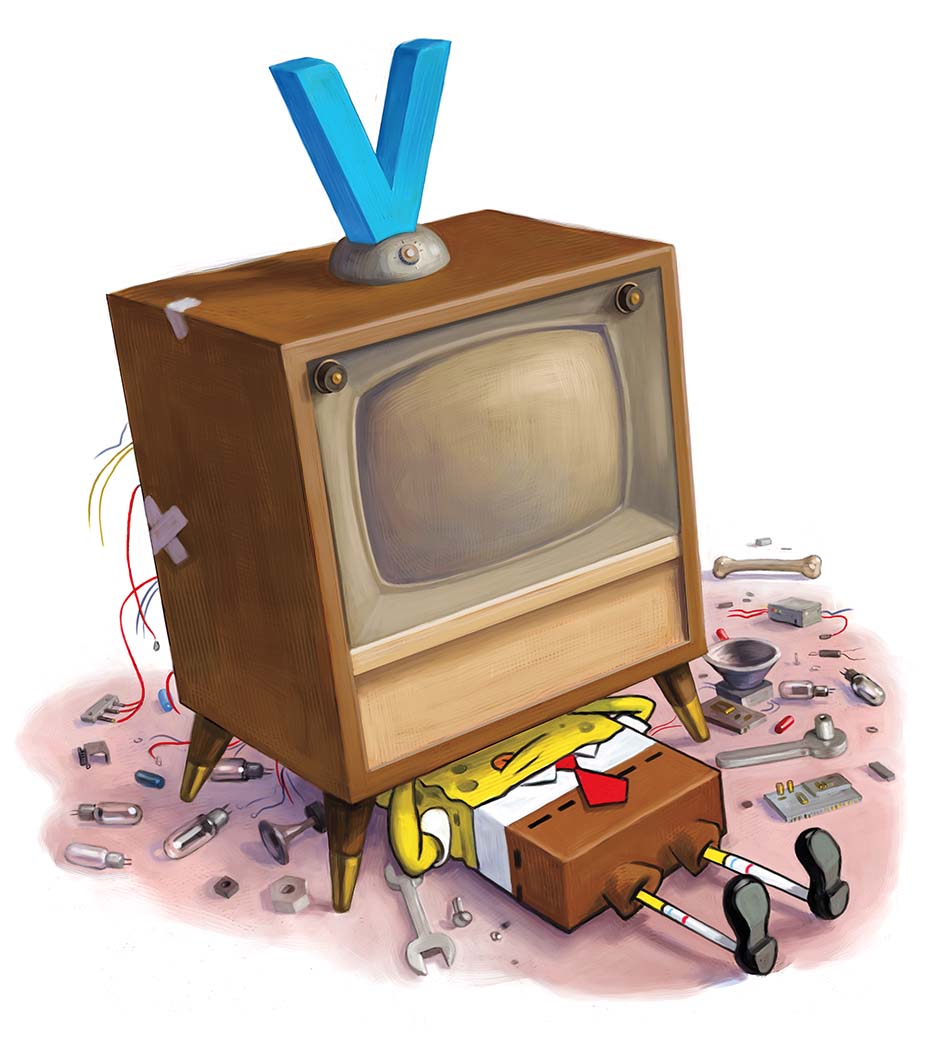 An added distraction is the renewed likelihood that Viacom will merge with CBS Corp., which one high-ranking executive says is all but inevitable now that the latter’s interim CEO, Joseph Ianniello, has extended his contract. Longtime Viacom loyalists are working to ensure Bakish, who has remained silent on the prospect of a merger, is seen by the board and majority owner Shari Redstone as the future of the combined company because, per the executive, “She’s a Redstone and any bright object could catch her eye.”

Despite the challenges, Naveen Sarma, an analyst at S&P Global Ratings, says that Viacom “has been more aggressive in the last couple of years building out digital capabilities. There’s an opportunity for them to do really well here.”

When Bakish took the reins in late 2016, it was just emerging from a drama-fueled battle as Redstone wrested control away from ex-CEO Philippe Dauman. Morale was low. The business, which sat at the vanguard of pop culture during cable’s peak, was struggling to adapt to a changing landscape in which its portfolio of niche networks no longer wielded the same influence with distributors. Paramount, too, was losing hundreds of millions annually, having failed to develop or acquire major franchises as they came to dominate box office.

Another executive might have looked to make a quick buck by striking lucrative licensing deals with the streamers for shows like The Daily Show or SpongeBob SquarePants. But Bakish chose to hold on to those rights, inking only select pacts for older programming. The implication was that he was saving these shows for an eventual Viacom stand-alone service. And while he has launched targeted subscription products Nick Hits and Comedy Central Now (with more expected) and released a broader service called Paramount+ in parts of Europe and South America, he settled on an ad-supported strategy.

“We saw that there’s a lot of investment on the SVOD space — Netflix, Disney+, AT&T’s product — and at the same time people were not focused on this free space,” explains Bakish, “and it is very substantial in terms of broadband-only homes and fits very well with mobile.”

Enter Pluto TV, which Viacom bought after exploring several possible ad-supported video acquisitions. The 6-year-old company co-founded by CEO Tom Ryan launched as a repository for shortform web videos, offering cord-cutters a TV-like setup with channels that play videos as though they’re airing live. Over time, it has added programming from CNN, Fox Sports and Sony. Now Viacom has infused it with 14 new channels that carry such shows as Blue’s Clues, 16 & Pregnant and Duck Dynasty. While current Viacom programming like new seasons of Jersey Shore Family Vacation and RuPaul’s Drag Race will remain exclusive to its television networks, Pluto is taking full advantage of the company’s back catalog. (Viacom does not break out Pluto TV revenue but said its Advanced Marketing Solutions business grew 76 percent due in part to the acquisition.)

Although much smaller than its subscription video rivals and not attracting customers with original programming, Pluto TV is one of the more established free platforms, which could give it a leg up as new ad-supported entrants from the likes of NBCUniversal come online. “If they can get enough content on this platform, people will start viewing it as, ‘I need to go to this platform,’ ” notes Sarma. James Gross of Barrington Research Associates writes that Pluto TV “provides potential access to a very vital young demographic.”

Before acquiring Pluto TV, Bakish had been making smaller bets on digital. He started by tapping Discovery veteran Kelly Day to run a new division, Viacom Digital Studios, focused on bringing the cable brands to social video platforms including YouTube and Snapchat. Along the way, Day scooped up events business VidCon and her former employer AwesomenessTV for a bargain price of less than $100 million. (Its former CEO, Brian Robbins, was put in charge of Nickelodeon two months later.)

Those businesses support Bakish’s plan — inspired by Paramount Television selling shows like 13 Reasons Why to Netflix — to turn Viacom into not just a network owner but also a producer of programming that it sells to others (which he anticipates will grow to a $1 billion enterprise by 2020). Part of this strategy was born out of necessity. Unlike Disney, Viacom doesn’t have the kind of IP that makes its networks a must-have, so it makes sense to sell to other platforms where properties can generate a bigger audience. (Similar forces led storied Paramount Pictures to ink a once unthinkable deal to supply Netflix with movies last year.)

In success, this gambit looks like the Awesomeness-produced To All the Boys I’ve Loved Before and PEN15, which drew buzz on Netflix and Hulu, respectively. Viacom now operates Comedy Central Productions, which has inked deals with the producers behind such shows as Broad City and Inside Amy Schumer (an ability to sell widely is more appealing to in-demand talent). MTV Studios recently tapped HBO documentary guru Sheila Nevins to launch a news and music docs group and also made the counterintuitive move to sell a Real World reboot to Facebook, a large but still nascent video platform that could use the boost of the well-known franchise. “It felt like a no-brainer for us,” says Facebook development and programming head Mina Lefevre, a former MTV programming executive herself. “They were very open and wanted to reinvent the format, shake it up.”

The clearest example yet of what Bakish hopes Viacom will look like in the future was on display April 29 when it held its second NewFronts pitch to advertisers. YouTubers Eva Gutowski and Brent Rivera touted digital-first projects on the same stage as Comedy Central star David Spade. Day boasted that Viacom “brings together premium television creative with digital production expertise and delivers to audiences at scale, in a social environment that we control.”

Still, three years into Bakish’s tenure, investors aren’t convinced that his turnaround plan will work and have sent the stock down 22 percent. The solution may be to merge with CBS, a deal that could give both companies the scale they need to compete. Not to mention, broadcast is the original free TV. 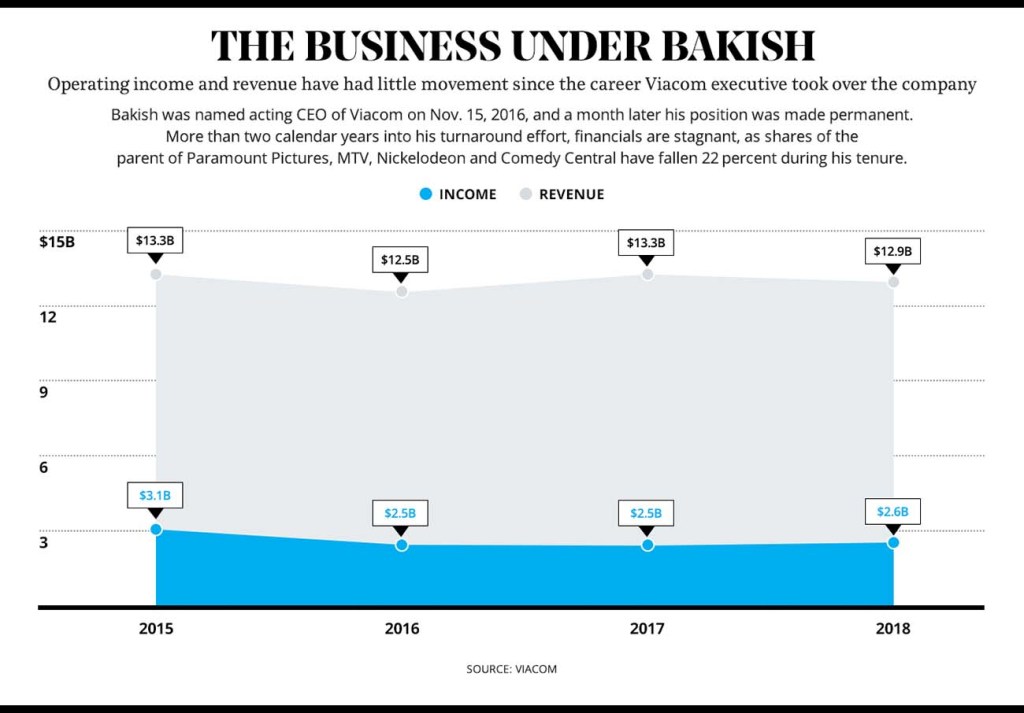 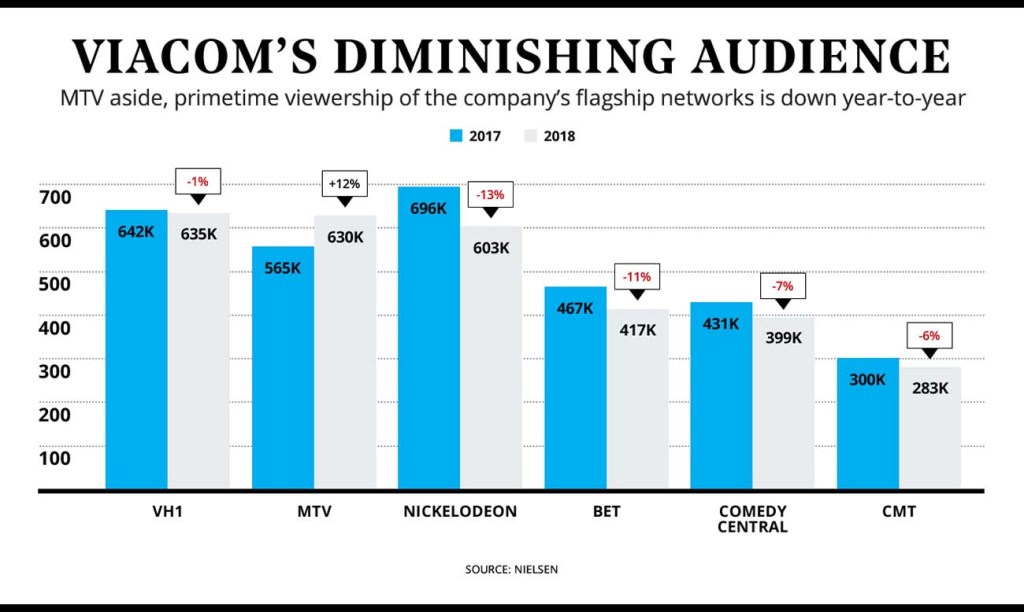 A version of this story first appeared in the May 29 issue of The Hollywood Reporter magazine. To receive the magazine, click here to subscribe.