While the West has seen Rihanna, Kanye West, the Kardashians, the Olsens and Victoria Beckham become power players after founding successful fashion brands, China’s big actors and celebrities rarely venture out in the same way. But Carina Lau may change all that.

At Shanghai Fashion Week in November, the lights were low as a screen played poignant clips from the 1990 Wong Kar-Wai film The Days of Being Wild, starring Lau and a young Tony Leung, the power couple of Hong Kong-Chinese film. A minute later, models started walking the runway.

“Only after I started this brand did I realize how tough fashion is. I just finished spring 2018, and I already have to think about fall 2018,” Lau tells THR. Her first collection is currently being sold at Lane Crawford, but after the spring runway show the label was picked up by 11 more retailers. “I feel like a little hamster on a wheel. I’m tired but also really happy with what we’ve done at Anirac.”

She’s influenced by her travels, Lau explains. A recent trip to Havana was exciting in terms of “the colors and contrasts of their culture.” For spring 2018 there was a hint of Japanese style, but there’s also the inescapable influence of film.

“When I was designing, I watched this movie called A Girl on a Motorcycle (released in 1968 starring Alain Delon and Marianne Faithfull). I like independent, powerful women and I like that spirit of adventure. I skydive, dive and snowboard myself.”

Her husband and one of Asia’s most famous actors, Tony Leung (Infernal Affairs, In The Mood for Love) has been a big supporter of her fashion label. But he doesn’t share her love of serial entrepreneurship outside of a film career. “Everyone is different,” Lau says. “He is one of those people who only likes to focus on one thing at a time. He is quite single-minded in that way. I am a totally different type of character.”

Lau, who started her career in Hong Kong, is now a prolific entrepreneur but remains one of the city’s biggest film and TV stars and original divas. She’s known for daring red carpet fashion: a black and white Schiaparelli Couture look one day, followed by a silvery feathered Atelier Versace dress or a blood red Ralph & Russo gown. Statement outfits are a forte, but this sartorial confidence took some time to cultivate. 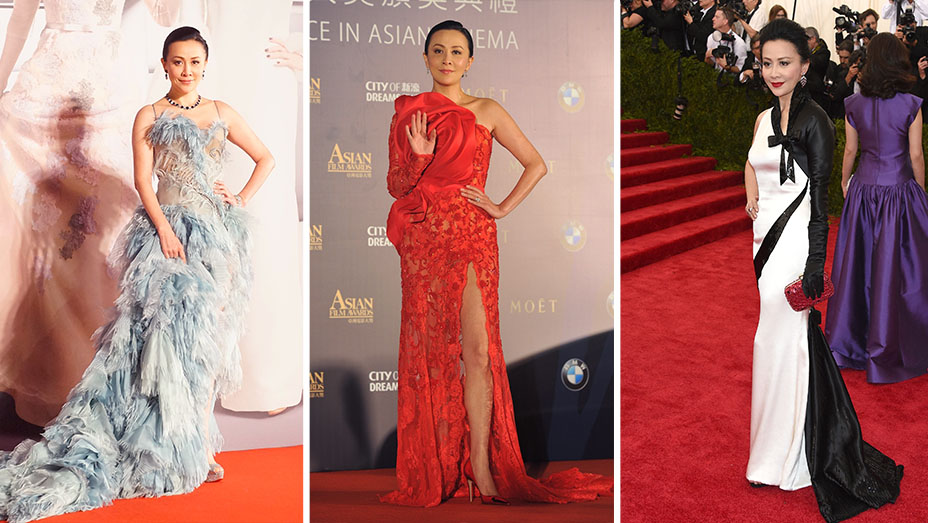 “When I was little, it was the generation after the Cultural Revolution in China. When we wore clothes, it was literally a choice of colors: black, blue, white,” she recalls. “Then when I moved to Hong Kong in my teens, suddenly there was this explosion of colors, patterns and styles there. I even remember the strong smell of perfume.”

Having been in the industry for over three decades, she’s also watched with fascination as China’s film and fashion industries exploded onto the international scene. She talks about when Hong Kong-Chinese collaborations began to dominate the film market, a centralizing trend that started in the late ‘90s or early 2000s. And not only have outside attitudes to the Chinese film scene changed, the country itself has obviously gone through unprecedented transitions socially, economically and culturally.

“Development in China has been unimaginably fast,” Lau says. “Today, a lot of Chinese young people have been traveling or studying overseas — they’re seeing the world and their views are different from generations before. So in our films today, we really have to reflect this.”