Talk about dodging the sophomore jinx. Composer Richard Rodgers and writer-lyricist Oscar Hammerstein II brought unprecedented maturity, sophistication and seamlessly integrated drama to the American musical with their landmark 1943 smash, Oklahoma! Their second collaboration two years later expanded the form even further. Carousel embraces darkness and brutality while balancing sorrow with jubilation, tragedy with redemption in a show whose emotional complexity is equaled by its ravishing score. What a gift to have it back on Broadway in a magnificently sung revival that breathes pulsing new life into this shimmering masterwork.

The last time Carousel returned to Broadway was 24 years ago. What’s perhaps most striking about revisiting classics of this caliber — and there really are only a handful of them in the canon — in an ideally cast production like this one is how shoddy they make the craftsmanship of most new musicals look. They don’t call it the Golden Age of Broadway for nothing. It’s not just the glorious songs but also the exhilarating dance interludes that grow organically out of the characters and storytelling.

Directed in its 1945 premiere by Rouben Mamoulian and choreographed by Agnes de Mille, this was always a musical that ventured deep into ballet, with its pantomime carnival prologue, its buoyant celebration of the sailor’s life, its joyous welcome to early summer and its haunted vision from purgatorial limbo of the loved ones left behind by the brooding central character. Director Jack O’Brien teams on this revival with Justin Peck, resident choreographer of New York City Ballet, making an impressive Broadway debut that bulks up the dance elements possibly more than ever before. And the sumptuous 24-piece orchestra does the score full justice, as do Jonathan Tunick’s vibrant orchestrations. 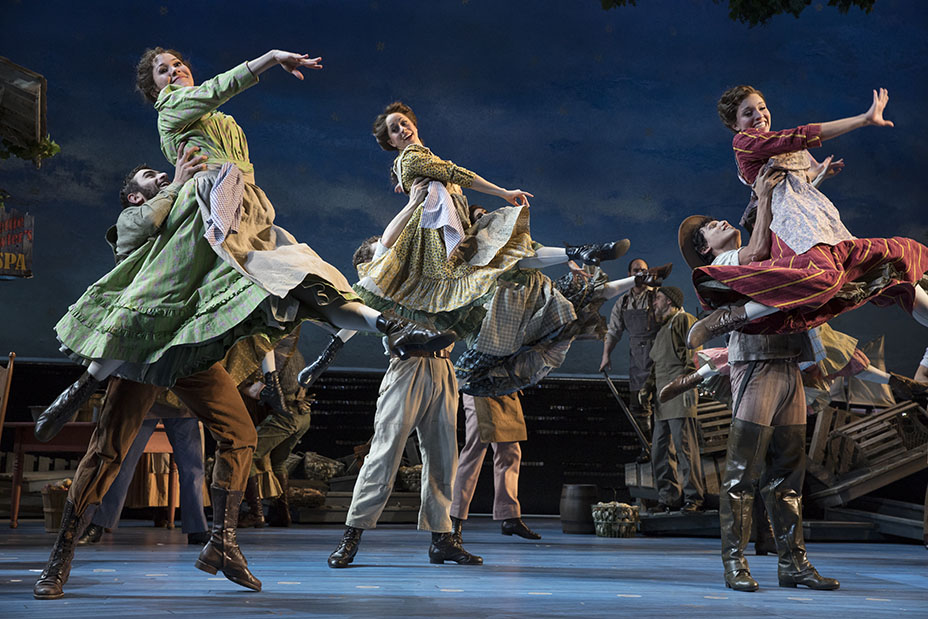 O’Brien and Peck are in sync with the artistry of Rodgers and Hammerstein from the start. The writers’ unconventional choice to open not with an overture but with a lengthy, near-wordless stretch of busy scene-setting, accompanied by Rodgers’ lilting “Carousel Waltz,” allows for the key characters to be introduced with a vivid splash, hinting at conflicts to come.

Designer Santo Loquasto drapes the stage with the first of many lovely, retro-styled backcloths, framed by trees with foliage resembling black lace. While the choice to show just a single carousel horse for Julie to perch on might seem minimalist, there’s a wow moment — cleverly mirrored later on — when the merry-go-round’s canopy descends from above and unfolds. It makes the symbolic carousel a part of our imagination, while also leaving the stage clear for the exuberant dancing of the townsfolk and carnival workers.

Once the dialogue and songs begin, the character sketches of the opening acquire more body. Cheerful, confident Carrie is established as the polar opposite of dreamy, introspective Julie when she sings “You’re a Queer One, Julie Jordan,” prodding her to admit her attraction to Billy. 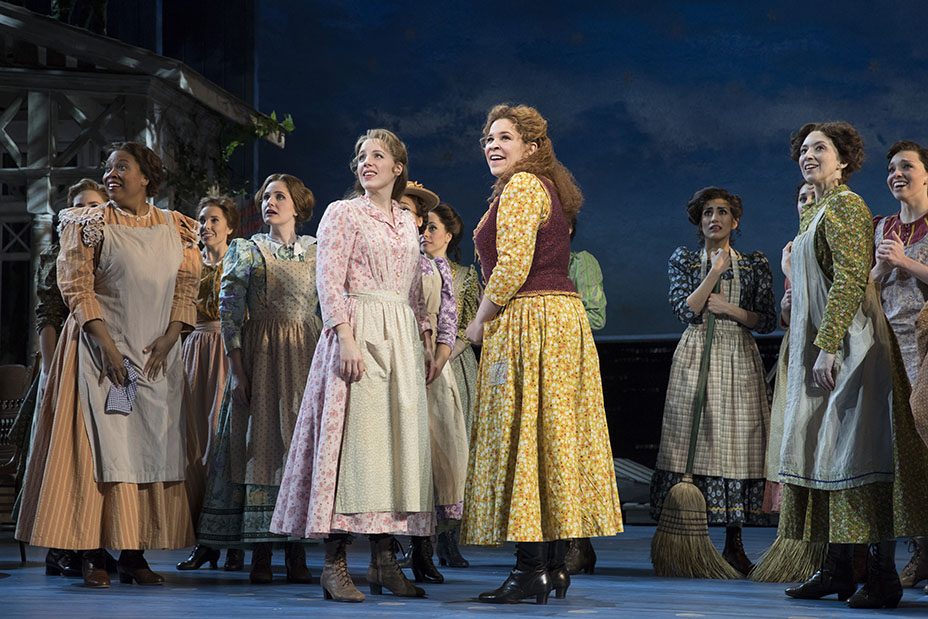 Mendez makes Carrie a captivating presence — plainspoken, pleasantly rough around the edges and a true friend. The big surprise, however, comes when she skips through the customary R&H musical preamble and ascends into the song proper on “Mister Snow,” Carrie’s swooning ode to the fisherman she plans to marry. At that point, it becomes clear that Mendez might just be the revelation of this uniformly gifted cast. She’s been terrific in contemporary musicals in the past, but this is her first role in a major classic, and who knew her voice had such a spectacular extension? She finds all the comedy in the sweet character song but also the transporting rapture of a young woman head over heels in love. You can almost smell the salty sea breeze.

In the famous “Bench Scene,” where Julie and Billy get acquainted, Mueller conveys the first signs that Julie is aware of the volatile stranger’s dangerous side but is drawn to him like a magnet nonetheless. And while Henry’s swaggering Billy toys with frightening her off, he lets some softness show in their exquisite duet, “If I Loved You,” the purest of R&H’s trademark conditional love songs. The emotional candor that Mueller brought to her performances in Beautiful and Waitress serves her well again later, as Julie articulates her acceptance of Billy’s faults with heart-tugging simplicity in “What’s the Use of Wond’rin‘?”

The story was inspired by Hungarian playwright Ferenc Molnar’s 1909 drama Liliom and relocated to coastal Maine in the late 19th and early 20th centuries. It follows the melancholy path of Julie’s marriage to abusive Billy, and Carrie’s blossoming as the wife of ambitious Enoch Snow (Alexander Gemignani), with whom she has a brood of children. One mill worker’s life is marked by loneliness, heartbreak and a lingering whiff of disgrace, the other by prosperity and respectability, with a controlling husband she’s smart enough to manage.

A remarkable aspect of O’Brien’s production — and of Henry’s staggering, soulful performance, which is this revival’s smoldering core — is that even in our current moment of heightened attention toward mistreatment of women, in which a hot-tempered man like Billy might seem an automatic villain, there’s a tormented helplessness to this doomed, rootless transient that makes you understand Julie’s surrender. Even when she swallows her shame and makes excuses for his reprehensible behavior; it’s almost as if in choosing to love him she has chosen to be an outsider like him, too. 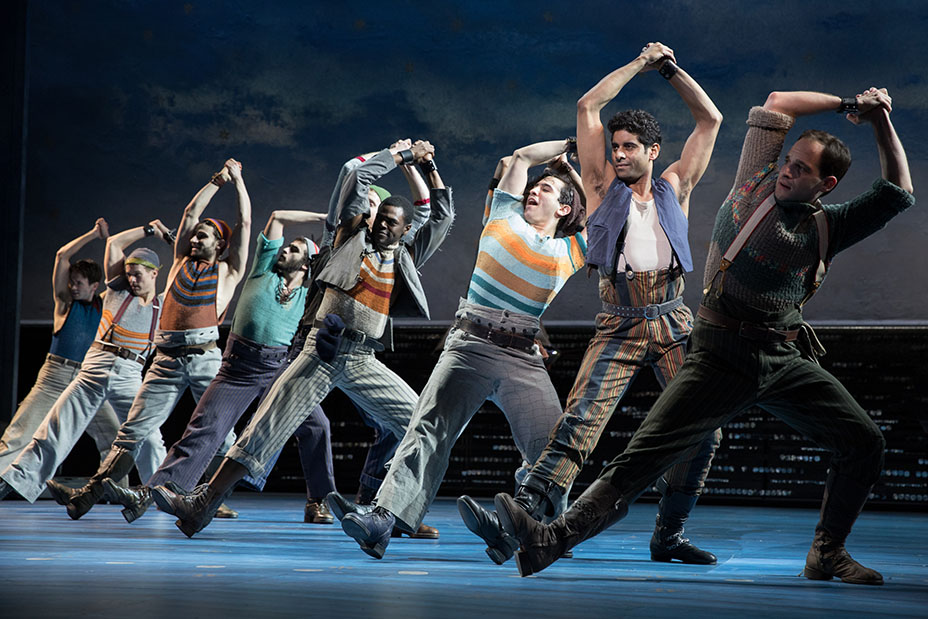 Billy is too caught up in his sullen bravado and defensiveness to really show her how he feels, but when he learns she’s carrying their child, his reaction is transformative. That occurs in the show’s crowning achievement, Billy’s thrilling, stream-of-consciousness “Soliloquy,” sung by Henry with astonishing force and richly humanizing depth of feeling as he swells with pride at the thought of raising a son, then does an abrupt pivot to tenderness at the realization the child could be a girl. That latter half of the seven-minute epic traces a touching arc from almost awed hesitation, as if he’s afraid he might break her, to the steady summoning of conviction, of a solemn vow to protect and provide. The song closes the first act on a breathless emotional high.

So many of the songs in Carousel deal with dreaming, hoping, fantasizing about a future that doesn’t always go according to plan. Still, for all its wrenching sadness, there’s no shortage of enchantment or boisterous vitality.

As for vocal highlights, it’s hard to go past the songs of Nettie Fowler, who takes in her cousin Julie and her jobless husband at her place by the seaside. In a superb musical theater debut, celebrated opera star Renee Fleming is the essence of warmth, good humor and grounded serenity. Her trilling soprano is sheer euphoria on “June Is Bustin‘ Out All Over,” and she leads a rousing post-prandial sing-along in “A Real Nice Clambake.” But it’s when a robbery goes horribly wrong and tragedy strikes that Fleming pulls out all the stops on the soaring hymn of comfort, “You’ll Never Walk Alone,” a song that makes it impossible to remain dry-eyed. 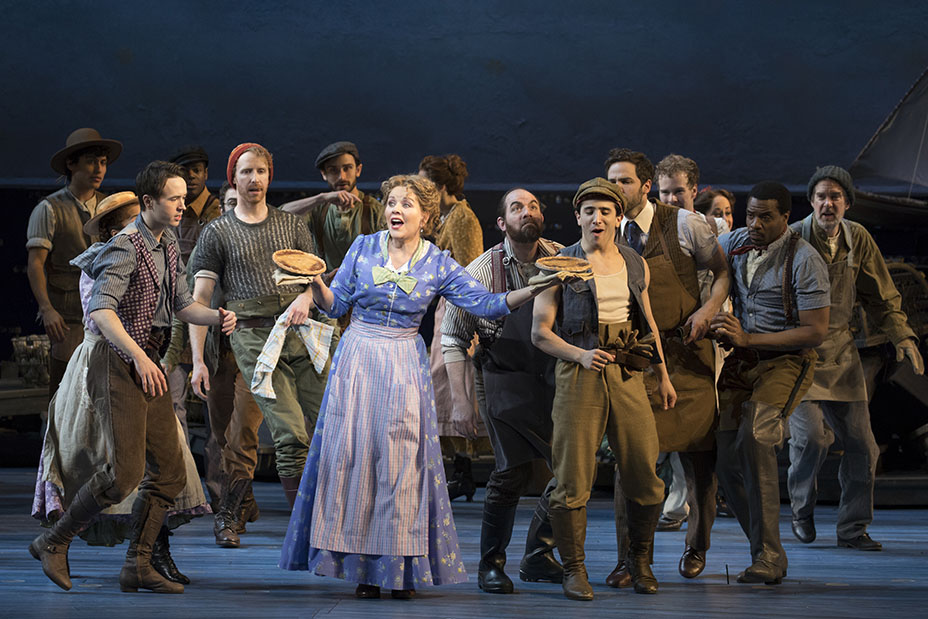 The later second-act scenes darken in tone, shifting between an afterlife for outsiders pending entry to heaven and back in Maine, 15 years later. Officiating over the celestial way station and tended by a bunch of scruffy angels is an enigmatic figure with an attentive eye on Billy throughout, the Starkeeper (John Douglas Thompson), who describes the rear gates as less pearly than “mother-of-pearly.”

Another key character is introduced in Julie and Billy’s teenage daughter Louise, played by City Ballet soloist Brittany Pollack with a raw, yearning quality and a combustibility that makes the character very much her father’s daughter. Her extended ballet — first alone and then in a roughly sensual pas de deux with Andrei Chagas as a fairground boy — seems to hold the fatalistic promise of repeating her mother’s mistakes or turning into her father. But the miracle of Carousel is that it achieves a quasi-happy ending of absolution and deliverance without crashing into corn. The spiritual finale, with voices merging in sublime harmony on a reprise of “You’ll Never Walk Alone,” is perfection.

O’Brien has put together a dramatically forceful production that feels earthy and real, almost gritty at times, but is also wrapped in a charming old-fashioned theatricality that’s quite whimsical. The play of Brian MacDevitt’s poetic lighting on Loquasto’s sets is transfixing, whether we’re looking at a giant, low-hanging moon or a glittering ocean with three-dimensional sailboats slowly moving across the bay. Ann Roth’s costumes go more for character appropriateness and authenticity than the usual musical prettiness, though she does provide a fabulously tarty getup for lascivious Mrs. Mullin.

Apropos of that character, having actors as accomplished as Colin, Gemignani and Thompson in small roles is further indication of how meticulously curated this superlative production is, from top to bottom.