A woman who worked on HGTV star Carter Oosterhouse’s popular show Carter Can alleges he coerced her into performing repeated acts of oral sex during production, an experience that she says eventually led to her becoming hospitalized for depression and losing her job.

Kailey Kaminsky, who was employed as Oosterhouse’s makeup artist in 2008, tells The Hollywood Reporter that she acquiesced to his demands for oral sex when the carpenter turned reality TV star threatened her employment after months of incessant badgering. “At that point I was a nervous wreck,” says Kaminsky. “I was so worn down from his advances, so I did: that day, on that occasion. It was the first time. Then thereafter it was most every time we would shoot — 10 to 15 times he put me in this position.”

In a statement to THR, Oosterhouse, who declares the accusation “upsetting,” acknowledges “an intimate relationship” with Kaminsky but contends that “it was 100 percent mutual.” He adds that it was never “indicated to me in any way that Kailey was uncomfortable” during their time together, and “I would have never done anything that I was not sure was mutually agreeable. The reality is that I knew it was consensual because she initiated it the first time and many of the 15 or so times we had oral sex thereafter.”

In a follow-up interview, Oosterhouse asserts he’s never been intimate with any other crewmembers or executives on any production in his professional career aside from Kaminsky. He declined to comment when asked whether a sexual relationship could ever truly be consensual between the star of a TV show and a show staffer whose employment is dependent on remaining in the star’s favor.

According to Kaminsky, then 34, the persistent requests for oral sex began a year into her employment on the show when Oosterhouse, then 32 and a home improvement TV star after gaining fame on TLC’s Trading Spaces, propositioned her while the pair were running errands in a truck during a location shoot in his hometown of Traverse City, Michigan. She repeatedly rebuffed him on the trip, she says, and his advances were even more surprising because she identifies as a lesbian. 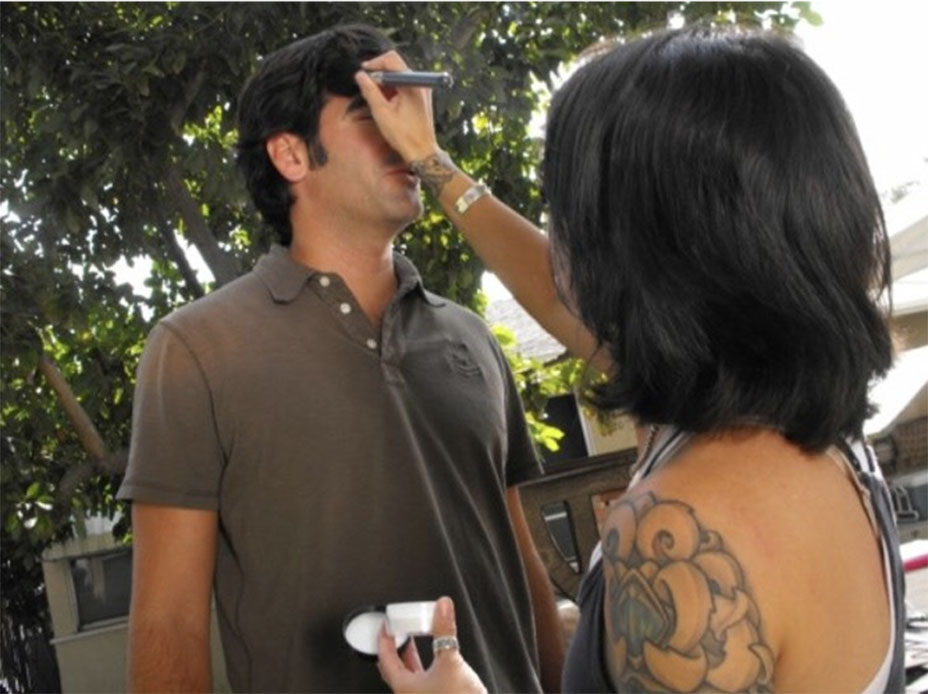 “He’s like, ‘You know what would be a good idea? If you went down on me,'” she recalls. “I was shocked — it was so random. I said, in my sarcastic way, ‘Well, that’s not sexual harassment at all.’ He said, ‘I just think it would be fun.’ I made it clear that I did not think it would be fun. Still, I thought he was just goofing around.” Kaminsky adds that her subsequent persistent refusals “didn’t register. It was as if he had tunnel vision. He was determined to get a blow job.”

After a short production hiatus, she contends the requests for oral sex continued back in Los Angeles, over time shifting from good-natured to pestering to, finally — while again in a vehicle together in early September — intimidating, at which point she describes herself as “capitulating.” On the way to a project site, “he pulled off the road and said, ‘Do you enjoy your job?’ I said I did and in fact would like to work more, handling more of his personal appearances outside the show. He said, ‘Well, I can help you with that. But you need to do something for me.'”

Kaminsky says she interpreted the conversation as imperiling her professional relationship with him, which at that point defined her career and livelihood. By her account, she thereafter dutifully submitted to his requests on between 10 and 15 occasions. They typically took the form of nonverbal cues (“It was eye contact; he would look at me and look down”) while they were alone together in Oosterhouse’s changing and makeup areas in the midst of episode shoots, often as he changed attire for the home “reveal.” She asserts that there was no reciprocal physical intimacy and that she felt further degraded because, “when he would assault me, he insisted on finishing on my face — every time — knowing that I had to go back out and work. I asked him about that. He said, ‘It’s just what I wanted to do.'”

By late October 2008, Kaminsky says her anxiety over the situation prompted a weeklong absence from Carter Can. “I developed this stomach ulcer, something I’d never had before, and was hospitalized for a week,” she says. “I kept beating myself up psychologically — that I was nothing but a prostitute. And the longer this went on, the less he would allow me to do my job. If I wanted to step in and touch up his hair and powder, he would push me away.”

Kaminsky claims Carter Can director Patrick Jager, who was unaware of the situation, cited her absence when he told her at the end of the year that she’d be replaced for the next season. (Jager, noting it’s been nearly a decade, says he doesn’t recall the reason her contract wasn’t renewed.)

Kaminsky says she confided in two female producers who worked on Carter Can during production and that they expressed concern but that, at the time, “I was trying to find a narrative to make myself feel better. I told myself that this is giving me power. I definitely went out of my way to pretend it was something that I was participating in willfully. I was like, ‘It’s fine, whatever.’ I was trying not to cry.” She adds, “It was Stockholm Syndrome-y, justifying-what-you’re-doing.”

(Reached by THR, one of the female producers, who requested anonymity, remembers Kaminsky’s confession that evening. It was framed to her as a consensual relationship. “It didn’t raise any flags, so I don’t think we suggested an intervention,” she says. “It didn’t seem like it was abusive.”)

After Carter Can, Kaminsky left Los Angeles, explaining that she descended into a depression that would eventually require in-patient treatment. “I was basically nonfunctioning, unable to hold a job,” she says. “I had no self-esteem. I just spiraled further and further down.”

Tim O’Grady, the man who Kaminsky would briefly marry, confirmed that he was told about the Oosterhouse incidents. A friend, Shelley Wunder-Smith, confirmed that Kaminsky shared her account with them in the years that followed the end of her tenure on Carter Can.

Kaminsky’s mother, Sara Levy, had flown to Los Angeles to visit her daughter in the hospital. At the time, she was left in the dark. “I was afraid to tell my mom because she had worked in the industry and she had said to me, ‘Make yourself indispensable, no matter what,'” says Kaminsky. “Still, she knew something was very, very wrong.”

Levy later learned the source of what she characterizes as “Kailey’s nightmare,” explaining, “My husband and I had to live through the repercussions of it.” Levy adds, “I saw my daughter crushed and crumbled. She was humiliated and demoralized.”

A year after she left Carter Can, Kaminsky says she contacted Sonny Hutchison, an official at its production company High Noon, about the situation. (High Noon was also behind Oosterhouse’s Red Hot & Green, airing on HGTV as well at the time.) By her account, Hutchinson told her that since she was an independent contractor and nobody he spoke to would corroborate her story, High Noon would not further address the matter. (Hutchison didn’t respond to a request for comment.)

After she informed Hutchison of her allegations, Kaminsky claims Oosterhouse called her and apologized, stating, “‘I’m so sorry. I thought it was mutual.'” She says he asked how he might make amends. Kaminsky suggested helping her get her career back on track “because I couldn’t get work. He said he would do whatever he could to help me out. But I never heard anything from him again.”

In his interview with THR, Oosterhouse, now 41, recalls the conversation differently. “I did say I thought it was mutual — because it was,” he says. “I didn’t apologize because I never did anything wrong. That’s the God’s honest truth. I felt bad that she was, in that moment, not-super-positive.”

Given Oosterhouse’s celebrity, Kaminsky would see him again, which she says prompted dark memories of 2008 to return. In 2011, she was at a grocery store and saw Oosterhouse on the cover of Us Weekly when he wed actress Amy Smart. (The pair have an 11-month-old daughter.) “I went back to the house with the woman I was dating and I broke down in a way that I never have,” she says. Last year, she turned on TV after work and saw him hosting ABC’s The Great Christmas Light Fight. “I melted down yet again,” she says. (The show returned for its fifth season on Dec. 4.)

More recently, the post-Weinstein news cycle has been painful, she says: “I read these stories and there’s PTSD: Why wasn’t I strong enough to protect myself?” Still, the #MeToo movement inspired her to come forward. “I’m not looking to be litigious or for money,” she says. “I just want to set the record straight about what happened to me.”

Since 2008, Oosterhouse has hosted several other shows (including HGTV’s Celebrity Motor Homes and FYI’s Rowhouse Showdown) while frequently making appearances as a home improvement expert on programs like Today, Rachael Ray and The View. The visibility has brought interest in modeling for major brands (Nivea, Hewlett Packard) and served as a vehicle for him to establish his charitable foundation, Carter’s Kids, which builds community playgrounds.

Kaminsky, meanwhile, is no longer a professional makeup artist. “He took away the joy that I got from doing makeup,” she says. “I just had no confidence.”

First off, let me say that I am very passionate about what is a happening right now with the #metoo movement, especially because I have so many strong woman in my life, like my wife, mother, sister and of course my little baby girl. We are in a time of change for society and I am behind it 100%.

I had an intimate relationship with Kailey 9 years ago and it was 100% mutual and consensual. In no way did I ever feel, nor was it ever indicated to me, that Kailey was uncomfortable during our intimate relationship. I would have never done anything that I was not sure was mutually agreeable.

The reality is that I knew it was consensual because she initiated it the first time and many of the 15 or so times we had relations thereafter. We were together outside of work and I considered her a friend.

I want to address a couple of the things she said. First, I didn’t have anything to do with her not being invited back to the show — that was a producer decision.

And as for the fact that she identifies as a lesbian — I didn’t know that — all I knew was that she was in a sexual relationship with another guy who worked on the show.

It’s upsetting that she now feels this way, I only wish her the best and truly hope that she can move forward.